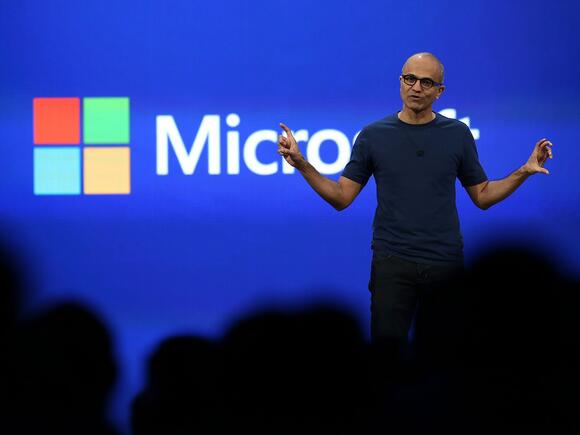 Microsoft stock hit record highs on Wednesday, jumping as much as 4% after the company reported strong first-quarter earnings.

The cloud provider posted record profits that exceeded analysts' estimates as growth in its Azure cloud and productivity units helped drive a 22% surge in revenues to $45.3 billion. The company also gave second-quarter revenue guidance that was ahead of consensus forecasts.

"We are off to a fast start for fiscal year 2021. The case for digital transformation has never been more urgent or more clear," said Microsoft CEO Satya Nadella.

Wall Street analysts seem to agree with him, as several raised their price targets for Microsoft stock and said the Redmond-based tech giant has more growth ahead. Here's how three analysts reacted to Microsoft's blowout quarter.

"Nadella & Co. handily beat Azure estimates by 300 bps with 50% cloud growth and gave December guidance well above expectations speaking to a cloud party that is still in the middle innings of playing out for Microsoft... We believe the strong numbers from Nadella & Co. is a broader indication of strength we expect to see across the enterprise cloud software landscape throughout this earnings season... In a nutshell, these results and stronger guidance will be enough to move the stock much higher into 2022," Wedbush analyst Dan Ives said.

"The re-acceleration potential with Azure that we had anticipated is playing out and bodes positively for upcoming quarters...We continue to see Microsoft as well positioned to capitalize on durable secular growth in digital transformation budgets, and we remain convicted in our thesis that Microsoft Cloud is on track to generate $120-$140bn in annual revenue, likely 1-2 years ahead of our initial expectations at the time of our January initiation," Goldman Sachs said, led by analyst Kash Rangan.

Salesforce.com, inc. (NYSE:CRM) shares fell Wednesday after the company missed expectations with its fourth-quarter guidance. Salesforce reported third-quarter adjusted EPS of $1.27 on revenue of $6.86 billion. Both numbers exceeded consensus analyst estimates of 92 cents and $6.8 billion, respectively. Revenue was up 27% from a year ago. Sales Cloud...
STOCKS・11 HOURS AGO
TheStreet

Salesforce Stock Down as Analysts React to Disappointing Guidance

CrowdStrike Holdings Inc. shares rose in the extended session Wednesday after the cybersecurity company reported quarterly results that topped Wall Street estimates and hiked its forecast for the year.
STOCKS・7 HOURS AGO

GlobalFoundries Inc. shares walked back some of their 50% in gains since their initial public offering a month ago as a few analysts raised price targets following a strong first earnings report and outlook given the ongoing global chip shortage.
STOCKS・10 HOURS AGO
MarketWatch

Brazilian digital banking platform Nu to offer 289.2 million shares in IPO, priced at $8 to $9 each

Brazilian digital banking platform Nu Holdings Ltd. set terms for its initial public offering on Tuesday, with plans to offer 289.2 million Class A shares, priced at $8 to $9 each. The company is also planning to list Class A shares in the form of Brazilian depositary receipts in Brazil, with each BDR representing 1/6(th) of a Class A ordinary share. The company has applied to list on the New York Stock Exchange, under the ticker 'NU.' Morgan Stanley, Goldman Sachs, Citigroup and Nu Invest Corretora de Valores SA are lead underwriters in a syndicate of 13 banks on the deal. Proceeds will be used for general corporate purposes. The company had a loss of $99.1 million in the nine months through Sept. 30, wider than the loss of $64.4 million posted in the year-earlier period. Revenue roughly doubled to $1.062 billion from $534.6 billion. The Renaissance IPO ETF has gained 0.5% in the year to date, while the S&P 500 has gained 24%.
MARKETS・1 DAY AGO
MarketWatch

Ether has surged by 530% during 2021, a stronger gain than bitcoin's doubling in price. The performance gap of more than 400 percentage points is the widest since 2015, according to Bloomberg data. Ether's run in November has been strong on a number of business developments surrounding the ethereum network.
MARKETS・1 DAY AGO

Salesforce.com Inc. produced a big earnings beat in its first full quarter with Slack Technologies Inc. on board, but projections for the end of the year slammed the stock in after-hours trading Tuesday.
STOCKS・1 DAY AGO
MarketWatch

The omicron variant of the coronavirus may hold back “breakout” performance for certain areas of the U.S. stock market, but heightened concern over the spread of COVID-19 infections hasn’t derailed the outlook for the S&P 500 index in 2022, according to RBC Capital Markets.
STOCKS・2 DAYS AGO
Investor's Business Daily

In the analysis that follows, we provide an update on the cloud category and review cloud stocks that have yet to report Q3 earnings. Tech earnings season is long and extends over six weeks. We are finally nearing the end of Q3 earnings season as the last round of cloud companies are expected to report in early December. We had previously highlighted Six Cloud Stocks to Watch During Q3 Earnings, all of which have since reported Q3 results.
STOCKS・6 DAYS AGO
Schaeffer's Investment Research

The shares of HP Inc (NYSE:HPQ), otherwise known as The Hewlett-Packard Company, are surging today, up 10.9% to trade at $35.71 at last check. This surges comes after the tech company posted better-than-expected fiscal fourth-quarter earnings and revenue. In response, no fewer than six analysts lifted their price targets, including Wells Fargo, which cited the tech company's sharp increase in the average selling price of PC's.
STOCKS・7 DAYS AGO
The Motley Fool

Feuding CEOs aside, JPMorgan's analysts are highly bearish on Tesla. They see the stock falling 77% over the next year.

Disagreements between Tesla and JPMorgan have sprung out into the open over the last two weeks. But feuding CEOs aside, JPMorgan's analysts have long been some of the most pessimistic voices on Tesla stock. The Wall Street titan's research unit thinks Tesla shares should be 77% lower in 12 months'...
STOCKS・7 DAYS AGO
Investor's Business Daily

With many growths stocks tumbling recently, it's important to look for strong stocks when trying to find bullish options trades. The relative strength on Microsoft stock is strong enough to justify a short-term option trade. But while the annualized returns are impressive with the short duration, consider that there is also extra risk.
STOCKS・8 DAYS AGO
MarketWatch

Shares of Zoom Video Communications Inc. sank toward its first sub-$200 close in 18 months on Tuesday in the wake of fiscal third-quarter results, as some Wall Street analysts expressed concern over customer growth even as the videoconferencing-service company extended its streak of profit and revenue beats.
STOCKS・8 DAYS AGO