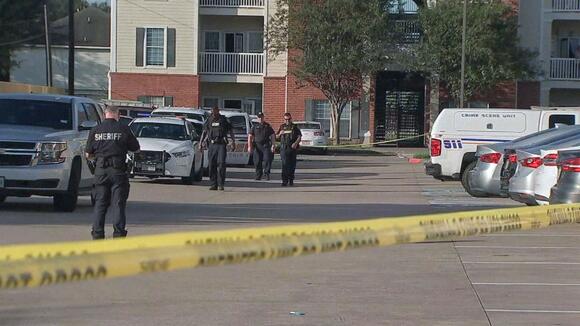 An 8-year-old boy whose skeletal remains were left in his Houston home died from "multiple blunt-force injuries," authorities said Wednesday.

The remains of the boy, who died around November 2020, were left in the apartment along with his three malnourished and abandoned siblings, ages 15, 9 and 7, the Harris County Sheriff's Office said.

The three surviving brothers were found home alone on Sunday when the 15-year-old called authorities. The teen reported that his 8-year-old brother had been dead for one year and his body was in the room next to his, the sheriff's office said.

"It seemed too horrific to be real," Gonzalez said at a news conference Wednesday.

The boyfriend of the 8-year-old's mother, 31-year-old Brian Coulter, was charged Tuesday with the boy's murder, authorities said. The boys' mother, 35-year-old Gloria Williams, was charged with injury to a child by omission and tampering with evidence, according to the sheriff's office.

The children were taken to a hospital and the Texas Department of Family and Protective services received emergency custody of them, Gonzalez said.

Authorities said Wednesday that one of the boys had a jaw injury, allegedly caused by Coulter several weeks ago, and will need surgery.

The boys all were very thin, officials added.

"The mother, we believe, was providing some food by delivery service or having food dropped off on a fairly routine basis," though it only appeared to be junk food, Gonzalez said.

The children had apparently not been in school for more than one year, the sheriff added.

"Those children [appeared] younger than their chronological age. They were very sweet children," one official said. "That blankness in the eyes, but they were as sweet as they can be."

"My prayer is that the remaining children find the love, support and protection that they so desperately need and deserve," Gonzalez said Wednesday.

Coulter did not appear at his initial court hearing Wednesday. His bond was set at $1 million, and he was ordered to have no contact with Williams or the minor witnesses in the case, according to ABC Houston station KTRK. Williams is expected to appear in court Wednesday.

This account of murder a n child abuse makes no sense. Why is this guy, accused of murder, have a bond? And the mother not charged with even more charges? I don't understand!!!

This is where the system failed children during the pandemic. They should have been checked on long ago with prior situations on record. Sorry for them and hopefully they get the counseling & love they need and deserve. Hopefully the "parents" whom the children who were abandoned by, are locked up for good and the woman should be made sterile because she's obviously a garbage "mother".... Doesn't deserve to be called a mother....

Meanwhile, hundreds, if not thousands of loving families like ours will sit in the queue for years, while undergoing the scrutiny of background checks, fingerprinting, home studies, interviews, and financial inspections annually, until the stars align enough to "match" with a child in need. The system is broken.

The shooter 'methodically and deliberately' fired at students. A timeline of a school shooting tragedy

(CNN) — Zander Cumbey had walked into his afternoon high school classroom when he heard screaming outside in the hallway. The cries were punctuated by a gunshot, he said. "My teacher, he walked into the classroom; he locked the door, and he told us to call 911. And then we heard the rest of the gunshots go off, more screams," Cumbey told CNN.
OAKLAND COUNTY, MI・42 MINUTES AGO
ABC News

A blizzard warning has been issued for Hawaii, with at least 12 inches of snow forecast this weekend.
HAWAII STATE・9 HOURS AGO
ABC News

An appeals court peppered DOJ attorneys Friday with questions over whether it's appropriate for the DOJ to defend Donald Trump against E. Jean Carroll's defamation suit.
POTUS・14 HOURS AGO
Fox News

U.S. officials believe Russia is planning a multi-front military invasion of Ukraine, involving as many as 175,000 troops, as soon as early 2022, Fox News has confirmed. A senior U.S. defense official told Fox News that details outlined in a report Friday night by The Washington Post are in line with the thinking of U.S. intelligence officials.
MILITARY・6 HOURS AGO

President Biden signed a short-term funding bill on Friday, averting a government shutdown hours before the deadline. A group of conservatives in the House and Senate had threatened the fate of the legislation over opposition to Biden’s coronavirus vaccine mandate before finally allowing the legislation to pass. The bill funds...
CONGRESS & COURTS・15 HOURS AGO
The Hill

The November jobs report gave a muddled picture of an improving economy. Overall job growth fell far short of expectations, with the U.S. adding just 210,000 of the roughly 500,000 jobs that analysts projected the economy to gain last month. Even so, the unemployment rate sunk from 4.6 percent to 4.2 percent, landing less than 1 percentage point above the pre-pandemic jobless rate.
BUSINESS・13 HOURS AGO
CBS News

South African health officials said Friday they are investigating a recent surge in cases among younger age groups not seen in previous waves of the virus, as the country battles an "unprecedented" surge of COVID-19 cases it believes is fueled by the Omicron variant. Officials in South Africa are not...
KIDS・12 HOURS AGO
The Hill

More than 65 million American women would immediately lose access to an abortion in their home states if the U.S. Supreme Court strikes down the landmark case that established the right to seek the procedure nearly half a century ago. Existing laws on the books in 20 states ban abortions...
CONGRESS & COURTS・1 DAY AGO

Oxford school shooting victim's brother: 'Never in my life will I feel this pain again'

(CNN) — Friends, family and an entire Michigan high school are grieving the loss of four students after a 15-year-old sophomore allegedly opened fire during the school day, killing four peers and shooting seven others on campus. A suspect was in custody and charged after Tuesday's shooting at Oxford High...
PUBLIC SAFETY・2 DAYS AGO
CBS News

Johannesburg — As data on real-world infections in South Africa, where the Omicron variant of the coronavirus was first identified, suggest the mutated virus has an increased ability to reinfect people who have already had COVID-19, the new strain is also highlighting inequalities in the global pandemic response. A study...
HEALTH・22 HOURS AGO