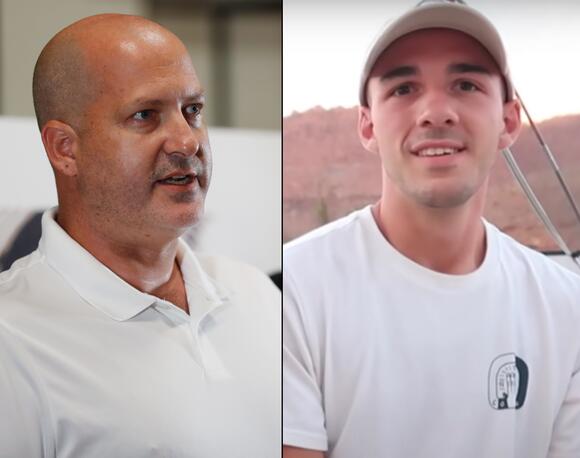 NEW YORK (1010 WINS) – Gabby Petito’s father, Joe, said he isn’t obsessing over Brian Laundrie’s recently recovered notebook and that he doesn’t expect its contents to bring him any form of closure.

Gabby Petito’s father, Joe, said the notebook that was recovered near Brian Laundrie's remains at a Florida reserve last week won’t bring closure for him if authorities are able to retrieve some of its contents.

The notebook was discovered last Wednesday not far from skeletal remains that were confirmed to be Brian’s. A backpack belonging to the 23-year-old was also discovered, though it’s unknown what may be inside.

Joe told TMZ in a report Wednesday that he’s not concerned with what’s in the notebook, as nothing Brian may have written will bring back his 22-year-old daughter.

He told the outlet it’s also unlikely anything in the notebook will explain his daughter’s death or how it may have been avoided.

Joe said any possible revelations won’t help him recover from the loss of a child and that the only reason he’d be interested in the notebook’s contents is for his own selfish gratification.

He doesn’t believe the Laundrie family has much to gain from the contents either, as it won’t bring back their son.

North Port police spokesman Josh Taylor said this week that some of the contents of the notebook “may be salvageable,” though he deferred to the FBI, which is the lead agency on the case.

Joe Petito said he’d rather focus on the issues of domestic violence and missing people than on a notebook.

He told TMZ it’s “insane” that research shows one in three women in the U.S. have experienced domestic violence. He wants to help shed more light on the issue and make more resources available for victims.

He also wants to help find other missing people so future tragedies can be avoided.

The Petito/Schmidt family is already working towards both goals with their newly launched Gabby Petito Foundation , which held its first major fundraiser this month on Long Island.

Gabby’s remains were found at a dispersed camping area in Wyoming’s Bridger-Teton National Forest on Sept. 19, with authorities later saying she was strangled to death. About a month after her remains were found, authorities discovered Brian’s remains on Oct. 20 in an area of Florida’s Carlton Reserve that was previously underwater. His remains are still in the possession of authorities.

North Port police took to Twitter to dispel rumors that the DNA of the remains found in a Florida park don't match Brian Laundrie's.

Police posted a statement from the area medical examiner, reading, "The identity of the remains found at the Carlton Reserve on October 20th were confirmed by comparison to known dental records of Brian Laundrie. No DNA analysis has yet been performed on the remains. Samples will be submitted for DNA testing once the examination of the remains by the medical examiner's office is complete."

The statement seems to be in relation to a fast-spreading, false social media post claiming that there wasn't a DNA match. The post had over 147,000 shares on Facebook on Tuesday.

JMO....I think Brian is ALIVE!! I think the "dental check" was forged or someone lied about it!! AND, I believe the parents planted the items found, and most likely the notebook was written by doting mom, making it look like Brian wrote it, stating someone ELSE killed Gabby and he was too afraid to come forward because he thought everyone would accuse HIM!! I think the parents helped him get away from the VERY beginning, and then did ALL the other things just to stall FBI, letting them search while he got away!!! 🤥🤥🥴🥴🙄😬❓❓

Very interesting what Gabbys father said… “I’d rather focus on domestic violence and missing people than a notebook!” That’s what I’m talking about. Thank you Joe! Sending all the love and strength. God Bless Gabbys Soul🙏🏻

Hmmm purdy funny they say its Brian... I dont think soo.. Immm Why hasnt this so called notebook gottrn wet/destroyed ??? as if some one had just placed it there too find it.. when Brians parents went to search?!?!

(NEW YORK) — The death of Brian Laundrie, the boyfriend of murdered travel blogger Gabby Petito, has been ruled a suicide, according to the Laundrie family attorney. Laundrie’s remains were found Oct. 21 at the Carlton Reserve in North Port, Florida, in an area that had been submerged in water during a month-long search. The Sarasota County medical examiner did not conclude a manner or cause of death, so Laundrie’s remains were brought to a forensic anthropologist for analysis.
SARASOTA COUNTY, FL・14 DAYS AGO
informnny.com

Why is the Gabby Petito case still open?

NORTH PORT, Fla. (NewsNation Now) — Two months after Gabby Petito’s remains were found in Wyoming and a month after Brian Laundrie was found dead, both cases remain open and active. The FBI has never officially connected Laundrie to Petito’s death aside from calling him a person of interest. Former...
NORTH PORT, FL・14 DAYS AGO
PennLive.com

The lawyer for Gabby Petito’s family suggested there may soon be charges filed against “additional individuals” after authorities confirmed Brian Laundrie, her fiancé and the lone person of interest in her strangulation slaying, died by suicide. Attorney Richard Stafford floated the possibility in a press release late Tuesday, which also...
PUBLIC SAFETY・11 DAYS AGO
wfla.com

TAMPA, Fla. (WFLA) — For the parents of Gabby Petito, Thursday was the first Thanksgiving that their daughter would never be able to pay a visit again. According to authorities, Gabby Petito was strangled to death while at Wyoming’s Grand Teton National Park. Her body was was found at a campsite in the park on Sept. 19, weeks after her death.
TAMPA, FL・11 DAYS AGO

ST. PETERSBURG, Fla. — This Thanksgiving was a time for family and loved ones to come together and spend time with each other. But for Gabby Petito's father, Joseph Petito, it was more time spent thinking of his daughter. "We miss you," he wrote on Twitter. "You should be with...
FAMILY RELATIONSHIPS・11 DAYS AGO
ABC7 Los Angeles

NEW YORK -- Brian Laundrie, whose remains were found in a Florida preserve more than a month after the death of his fiancée Gabby Petito, died of a self-inflicted gunshot wound to the head, family attorney Steve Bertolino said Tuesday. The cause of death came from an anthropologist who received...
PUBLIC SAFETY・14 DAYS AGO
The US Sun

BRIAN Laundrie killed himself with a bullet to the head, according to his autopsy results. The suicide revelation comes more than a month after Laundrie's skeletal remains were found in Florida's Carlton Reserve on October 20. "Chris and Roberta Laundrie have been informed that the cause of death was a...
PUBLIC SAFETY・14 DAYS AGO
The US Sun

GABBY Petito chillingly shared an Astroworld Instagram post with the caption "wish you were here" before her deadly road trip with Brian Laundrie. The 22-year-old shared a snap of her posing in a grey hoodie in a car alongside the hashtag '#Astroworld' in the same year the concert was first held.
CELEBRITIES・10 DAYS AGO

Brian Laundrie, who made headlines as a person of interest in the disappearance of his fiancée Gabby Petito, died of gunshot wound to the head, according to a statement from the Laundrie family attorney Steven Bertolino. Autopsy results confirm the manner of death is suicide, Brian Entin, a reporter for...
PUBLIC SAFETY・14 DAYS AGO
The US Sun

A PETITION is calling for an investigation into the North Port Police for their handling of the Gabby Petito-Brian Laundrie case. Launched one month ago, the petition already has nearly 5,000 signatures. Started by Gabby's Safe Haven 2.0, the petition intends to reach Florida Governor Ron DeSantis. The description reads:...
PUBLIC SAFETY・9 DAYS AGO
cbslocal.com

Brian Laundrie's cause of death have finally determined after more than a month of waiting. After influencer Gabby Petito went missing two months ago, the 23-year-old's absence spurred a nationwide search. He then became a person of interest in his fiancée's death. Brian Laundrie murdered himself, according to an autopsy...
PUBLIC SAFETY・13 DAYS AGO

Brian Laundrie, the sole person of interest in the killing of his fiancée, Gabby Petito, died by suicide, a Florida medical examiner said.
PUBLIC SAFETY・13 DAYS AGO
Outsider.com

Brian Laundrie died from a gunshot wound to the head, his family’s lawyer announced on Tuesday following an autopsy. The determination puts an end to speculation over how he died. Though police still haven’t closed the death investigation into his fiancee, Gabby Petito. “Chris and Roberta Laundrie have been informed...
PUBLIC SAFETY・13 DAYS AGO
The Independent

Brian Laundrie: Parents say they hope cause of death verdict ‘brings closure to both families’

Brian Laundrie’s parents say they hope that the result of an examination into his cause of death brings closure to both their family and that of Gabby Petito, his fiancé who was murdered in August.Family attorney Steven Bertolino announced that Mr Laundrie has died of a self-inflicted gunshot wound to the head.“Chris and Roberta Laundrie have been informed that the cause of death was a gunshot wound to the head and the manner of death was suicide,” he said.“Chris and Roberta are still mourning the loss of their son and are hopeful that these findings bring closure to both...
PUBLIC SAFETY・13 DAYS AGO
Outsider.com

The lawyer for Gabby Petito’s family suggested there may soon be charges filed against “additional individuals” after authorities confirmed Brian Laundrie, her fiancé and the lone person of interest in her strangulation slaying, died by suicide. Attorney Richard Stafford floated the possibility in a press release late Tuesday, which also...
PUBLIC SAFETY・11 DAYS AGO
Wave 3

SARASOTA, Fla. (WWSB) - Nichole Schmidt has described herself as a mom on a mission, following the tragic death of her daughter Gabby Petito. On this Thanksgiving, she tweeted in memory of her daughter, saying she was thankful to have had her in her life. “Gabby will forever remind me...
SOCIETY・12 DAYS AGO
yourbigsky.com

MOAB CITY, Utah (NewsNation Now) — Blogger Gabby Petito, who vanished while on a cross-country road trip with her boyfriend in a converted camper van, was at the center of a nationwide investigation. Investigators say Petito, 22, was last in contact with her family in late August when the couple...
BILLINGS, MT・5 DAYS AGO
Newsweek

Kirti Thore is believed to have been killed after she married a man her family disapproved of.
PUBLIC SAFETY・2 HOURS AGO