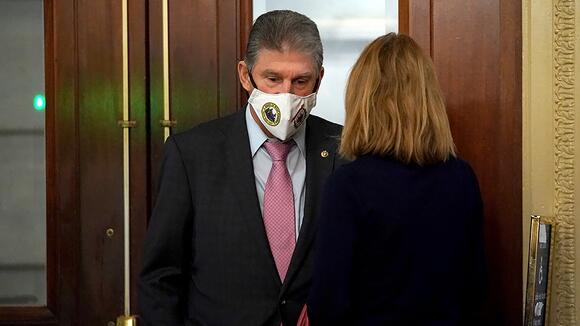 Sen. Joe Manchin (D-W.Va.) on Wednesday said he doesn’t like the idea of targeting only the 700 wealthiest Americans to pay for a big chunk of the Democrats' spending package, raising doubts over a newly proposed tax on billionaires.

“I don’t like it. I don’t like the connotation that we’re targeting different people,” Manchin told reporters when asked about the new tax proposal sponsored by Senate Finance Committee Chairman Ron Wyden (D-Ore.) that would hit billionaires and people who earned $100 million or more in three consecutive years.

Manchin argued that the ultra-wealthy “bring a lot of jobs, invest a lot of money and give a lot to philanthropic pursuits.”

Wyden’s bill runs 107 pages longs and addresses some of the most complicated sections of the tax code: the myriad loopholes that allow the super-rich to pass on wealth through trusts, gifts, annuities, life insurance policies and other vehicles.

Manchin’s criticism of the proposal prompted a frustrated response from Senate Budget Committee Chairman Bernie Sanders (I-Vt.), who lamented that a variety of Democratic tax proposals have already been pushed off the table.

Manchin predicted Wednesday morning that Democrats are likely to enact reform to spread the tax burden for the spending bill more broadly, though he didn’t specify if that means closing tax loopholes for the rich or raising taxes on people who earn below $100 million annually or have a net worth below $1 billion.

“I believe everyone’s going to pay. I believe that we will end up where everyone must participate,” he said.

Manchin floated the idea of what he called a “Patriotic Tax” that would entail a minimum 15 percent tax on individuals who otherwise would escape federal taxes thanks to various loopholes.

“Everybody in this country that has been blessed and prospered should pay a Patriotic Tax. If you’re to the point where you’re able to use all of the tax forms — if you can — to your advantage and you end up with a zero tax liability, but have had a very, very good life and have had a lot of opportunities — there should be a 15 percent Patriotic Tax,” he said.

Manchin noted that the entire Democratic caucus supports a 15 percent minimum tax on corporations and suggested a similar idea could be applied to the very wealthy.

“We’ve all agreed on a 15 percent corporate tax. People in the stratosphere, rather than trying to penalize them, we ought to be pleased this country is able to produce the wealth. But with that, there’s a patriotic duty that you should be paying something to this great country to give you the protection and the support and the opportunities,” he said. “Everyone should pay their fair share.”

Wyden said Wednesday that he read Manchin into his billionaires’ tax proposal as he was crafting it and that talks will continue.

“Sen. Manchin has always supported the principle that the very, very wealthy should pay their fair share. So we’re going to talk,” Wyden said.

“We talked to him and he’s seen some paper and apparently would like to talk some more,” he added.

Wyden said the problem with the proposal to impose a 15 percent Patriotic Tax is that many billionaires don’t report much income on an annual basis and instead borrow money against their untaxed assets to finance their lavish lifestyles.

“I’m interested of course in any of his suggestions,” he said. “Part of the issue is that [billionaires] don’t pay income taxes. And so what I’ve said is I’ve got a billionaires tax so they’re going to pay something every year.”

A vast trove of IRS information reported on by ProPublica.org in June showed that some of the nation’s richest people were able to avoid paying income taxes entirely by using the tax code their advantages.

Will President Joe Biden's $2 trillion social-spending and climate package actually get the Senate's OK this month, as that chamber's leader has promised? Two analysts from opposite ends of the political spectrum say that looks likely.
PRESIDENTIAL ELECTION・21 HOURS AGO
Markets Insider

Sen. Joe Manchin of West Virginia said on Tuesday that he would not support the one-year extension of the Child Tax Credit that is included in the $2 trillion social spending plan passed by the House. It raises the possibility that the proposed financial benefit would be altered further. He...
PRESIDENTIAL ELECTION・3 DAYS AGO
iheart.com

Texas Republican Senator Ted Cruz is accusing the Mexican government of targeting American oil and gas companies. Cruz brought up the matter this week in a Foreign Relations committee hearing. Mexican regulators recently shut down three privately owned fuel storage terminals, including one owned by Texas-based Monterra. Cruz says this action undermines the U-S-M-C-A trade agreement. He's urging the White House to do something about what he describes as Mexico's pattern of discrimination against American companies.
CONGRESS & COURTS・1 DAY AGO

WASHINGTON, DC (LOOTPRESS) – U.S. Senators Shelley Moore Capito (R-W.Va.) and Joe Manchin (D-W.Va.), members of the Senate Appropriations Committee, today announced a $1,750,000 Rebuilding Americas Infrastructure with Sustainability and Equality (RAISE) grant to support the Charleston Capital Connector Project. Specifically, the funding was made available through the U.S. Department of Transportation (DOT) and will upgrade approximately 3.5 miles of the Kanawha Boulevard East and approximately 0.25 miles of the adjacent Greenbrier Street corridors. The project will also plan and design bike lane extensions to the South Side Bridge and 35th Street Bridge.
CHARLESTON, WV・14 DAYS AGO
CBS Pittsburgh

By: KDKA-TV News Staff WASHINGTON (KDKA) – West Virginia Sen. Joe Manchin said overnight that he will support a Republican effort to overturn President Joe Biden’s vaccination requirement for larger businesses. That bill is expected to get a vote on the Senate floor next week. Senator Manchin said in a statement, “Let me be clear, I do not support any government vaccine requirement on private businesses. That’s why I have co-sponsored, and will strongly support a bill to overturn the federal government vaccine requirement for private businesses.” All 50 Senate Republicans are supporting the effort, so with support from the Democrat, it will give them enough votes to pass a resolution to end the requirement. The resolution would still need to pass the House but it would likely be vetoed by President Biden.
CONGRESS & COURTS・1 DAY AGO
WDVM 25

West Virginia senator explains why he voted to avoid shutdown

WEST VIRGINIA (WDVM) — On Thursday night, Congress voted to avoid a government shutdown by raising the debt ceiling yet again. While the vote went through, there was some tension in the chamber, as some legislatures aimed to use the government shutdown as a way to stop President Joe Biden’s nationwide vaccine mandate. While West […]
CONGRESS & COURTS・9 HOURS AGO
The Guardian

Sen. Joe Manchin is noncommittal on extending the child tax credit. On Tuesday, he told Insider "everybody's still talking and working. It's a work in progress." Millions of children are receiving the CTC, hundreds of thousands of them in Manchin's home state. On Tuesday, Sen. Joe Manchin of West Virginia...
CONGRESS & COURTS・3 DAYS AGO
drgnews.com

U.S. Sen. John Thune (R-S.D.) joined his colleagues in urging the Federal Maritime Commission to reevaluate the new fees imposed for ocean carriers at the Ports of Los Angeles and Long Beach that will be imposed starting tomorrow (Nov. 22, 2021). The members expressed concerns that these increased shipping costs will eventually be passed on to American consumers, who are already facing numerous challenges as a result of the ongoing supply chain crisis.
CONGRESS & COURTS・12 DAYS AGO
wwnytv.com

WASHINGTON, D.C. (WWNY) - North country congresswoman Elise Stefanik said Friday on Twitter that Democrats are “ramming through a multi-trillion dollar tax-and-spending spree that will drive inflation even higher.”. That, as Democrats in the House of Representatives passed a massive social and environmental bill. The bill contains changes that touch...
CONGRESS & COURTS・14 DAYS AGO
Washington Post

It’s time to say it: The conservatives on the Supreme Court lied to us all

Yes, I’m talking about the conservative justices on the Supreme Court, and the abortion rights those justices have now made clear they will eviscerate. Opinions to start the day, in your inbox. Sign up. They weren’t just evasive, or vague, or deceptive. They lied. They lied to Congress and to...
CONGRESS & COURTS・16 HOURS AGO

On the surface, Congress was able to avoid a government shutdown with relatively little drama this week. Facing an inflexible deadline, Democratic and Republican leaders gradually worked toward a solution, confident that an ill-timed crisis would be avoided when all was said and done. With this in mind, the Democratic-led...
PRESIDENTIAL ELECTION・22 HOURS AGO
The Guardian

Sparks flew on the set of ABC's "The View" Friday as co-hosts clashed over President Biden's decision to restart the Trump-era "Remain in Mexico" policy. During a segment discussing Biden's decision, co-host Ana Navarro butted heads with Sunny Hostin and guest host America Ferrera over the policy, with the latter two excoriating Biden for breaking his campaign promise to end it, and the former arguing that the policy discouraged people from attempting to make the dangerous journey to the southern U.S. border.
PRESIDENTIAL ELECTION・15 HOURS AGO
The Free Press - TFP

Sen. Ted Cruz wants to sanction a natural gas pipeline — but not because of climate change

Good morning and welcome to The Climate 202! We survived another week of congressional dysfunction. But first:. Sen. Ted Cruz (R-Tex.) is crusading against Nord Stream 2. Climate isn't his main concern. For months, Sen. Ted Cruz (R-Tex.) has been stalling the confirmation of dozens of President Biden's foreign policy...
CONGRESS & COURTS・22 HOURS AGO
Dallas News

WASHINGTON — Congress struck a deal Thursday night to keep the government open through February, after overcoming a threat from Sen. Ted Cruz and a few allies to force a shutdown unless funds for a vaccine mandate were cut off. Federal courts have blocked the mandate, which is aimed at...
CONGRESS & COURTS・1 DAY AGO
The Independent

Asked about a shocking new claim that Donald Trump tested positive for Covid-19 before a presidential debate in 2020, Joe Biden had a blunt response.“I don’t think about the former president,” he told a press conference on Wednesday – before calmly turning and walking away.Mr Biden was being asked about a story from an upcoming book by Mark Meadows, Donald Trump’s last presidential chief of staff. In The Chief’s Chief, Mr Meadows recounts that the ex-president – known as “the former guy” in the Biden White House – was departing for a Pennsylvania rally three days before the debate...
PRESIDENTIAL ELECTION・1 DAY AGO