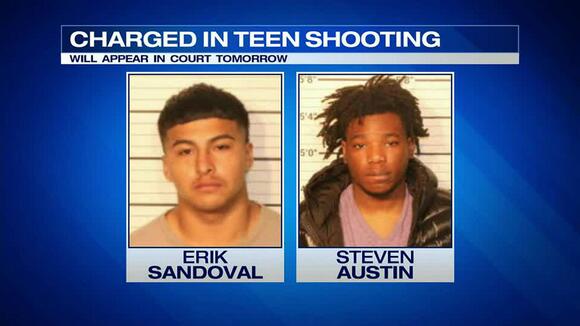 MEMPHIS, Tenn. — Multiple people are now behind bars after several teens were shot in the 1300 block of N. Graham.

The latter has now been charged. Steven Austin is now charged with 5 counts of attempted second-degree murder.

An affidavit said that Austin was shot in the left side and taken to Baptist East Hospital.

Police also confirm that a 17-year-old has now been charged. Due to his age, his name has not been released.

The shooting happened Monday around 2:45 p.m.

A witness told police a man named Erik Sandoval, 19, and his friends were selling drugs out of a vehicle parked in front of a school, records show.

At some point, people began fighting over a gun, and multiple suspects began shooting, police said.

Police recovered eight shell casings in front of the school.

MEMPHIS, Tenn. — Memphis Police are asking the public’s help to locate a missing woman. Marilyn Loy was with her husband at the Walgreens located at 8046 Macon Rd. when she walked away, a release said. When her husband Raymond Loy went back to their room she was not there,...
MEMPHIS, TN・23 HOURS AGO
FOX 13 Memphis WHBQ

HORN LAKE, Miss. — Horn Lake Police are investigating a shooting that left two people in critical condition. On Nov. 28, officers responded to the 6400 block of Sandhurst Drive for a shooting into a dwelling at 8:20 p.m. When officers arrived, they found several spent shell casings in front...
HORN LAKE, MS・17 HOURS AGO
FOX 13 Memphis WHBQ

Memphis police are searching for suspects wanted for homicide following a robbery and shooting at a southeast Memphis apartment complex. Officers responded to a shooting call at The Park at New Castle Apartments on Tuesday, November 23. According to police, Justin Flores was robbed, suffered multiple gunshot wounds, and later...
MEMPHIS, TN・1 DAY AGO
FOX 13 Memphis WHBQ

MEMPHIS, Tenn. — The Tennessee Bureau of Investigation has issued a Silver Alert after Memphis Police asked the public’s help to locate a missing woman. Marilyn Loy was with her husband at the Walgreens located at 8046 Macon Rd. when she walked away, a release said. When her husband Raymond...
MEMPHIS, TN・20 HOURS AGO

OLIVE BRANCH, Miss. — A Southaven man is facing charges after a Kentucky sheriff’s office found an ATV and car theft ring out of Mississippi. A resident of State Route 994 between Boaz and the McCracken County and Graves County line reported to the Graves County Sheriffs Office a 2021 Polaris General side by side UTV was stolen from their residence overnight.
MISSISSIPPI STATE・16 HOURS AGO
FOX 13 Memphis WHBQ

ORANGE CITY, Fla. — Police in Florida are investigating a shooting earlier this month that killed a pregnant library assistant, who witnesses said pulled a gun on a motorcyclist she purposely hit with her car. Sara Nicole Morales, 35, of Orange City, was shot multiple times Nov. 20 in a...
FLORIDA STATE・16 HOURS AGO
FOX 13 Memphis WHBQ

OGEMA TOWNSHIP, Minn. — The remains of a 33-year-old woman who disappeared in September were found in a wooded area in Hinckley, Minnesota, a couple of miles from where her car had been found partially submerged in a lake, NBC News reported. Deputies with the Pine County Sheriff’s Office confirmed...
MINNESOTA STATE・15 HOURS AGO

MEMPHIS, Tenn. — The funeral of Adolph Robert Thornton Jr., Young Dolph, was held today in Memphis. Memphis police told FOX13 they were assisting with traffic with the celebration of life. When the procession drove off, the hearse was covered in white roses as the community watched the legend travel to his final resting spot.
MEMPHIS, TN・16 HOURS AGO
FOX 13 Memphis WHBQ

Jury awards $2.1 million to woman accused of shoplifting at Walmart

MOBILE, Ala. — An Alabama woman who said she was falsely accused of shoplifting by retail giant Walmart has been awarded $2.1 million by a jury. In a lawsuit filed against Walmart, Lesleigh Nurse said she was stopped and accused of trying to steal groceries even though she had already paid, The Associated Press reported. The case against her was dismissed, but she continued to get letters threatening her with legal action if she didn’t pay $200 as a settlement.
MOBILE, AL・16 HOURS AGO
FOX 13 Memphis WHBQ

MEMPHIS, Tenn. — A group of church leaders has an action plan to combat crime in Memphis. The goal is to reach young men between the age of 11 and 21. Tuesday, members of the Southern Christian Leadership Conference said they have solutions to the problem. More than 40 pastors...
MEMPHIS, TN・9 HOURS AGO

CONNERSVILLE, Ind. — A pizza delivery driver in Indiana died after a porch collapsed on him while he was making a delivery. Police in Connersville, Indiana, said William Fields fell through the collapsed porch and was then pinned by debris, The Associated Press reported. Fields was working for Pizza King...
INDIANA STATE・18 HOURS AGO
FOX 13 Memphis WHBQ

LANCASTER, Calif. — (AP) — The Los Angeles County coroner has identified the victims in the brutal slaying of a grandmother and her four grandchildren, including a boy not yet 2 years old, in the Southern California high desert. The children's father, Germarcus Lamar David, is a security guard whose...
CALIFORNIA STATE・13 HOURS AGO
FOX 13 Memphis WHBQ

MINNEAPOLIS — (AP) — The suburban Minneapolis police officer who shot Daunte Wright will testify at her trial, her attorney said Tuesday as jury selection began with potential panelists questioned closely about their attitudes on policing, protests and the Black Lives Matter movement. Four jurors were seated in a process...
MINNEAPOLIS, MN・14 HOURS AGO
FOX 13 Memphis WHBQ

MEMPHIS, Tenn. — Families of homicide victims gathered on the University of Memphis campus for the annual Season of Remembrance event, hosted by Shelby County District Attorney Amy Weirich’s office. It’s the eleventh year of the event, but there was a change of venue this time. Sarah Carpenter was there...
MEMPHIS, TN・1 DAY AGO
FOX 13 Memphis WHBQ

NEW YORK — (AP) — Author Alice Sebold publicly apologized Tuesday to the man who was exonerated last week in the 1981 rape that was the basis for her memoir “Lucky" and said she was struggling with the role she played “within a system that sent an innocent man to jail.”
SYRACUSE, NY・14 HOURS AGO
FOX 13 Memphis WHBQ

CHICAGO — A man and his pit bull raced into action during a fire and have been credited with saving lives. Renaldo Vera told The Chicago Tribune that his dog, Chicago, wouldn’t stop barking and that was what alerted him to screaming outside and glass breaking. Without knowing who needed help, he ran into action, helping to pull two people from a burning building.
CHICAGO, IL・16 HOURS AGO