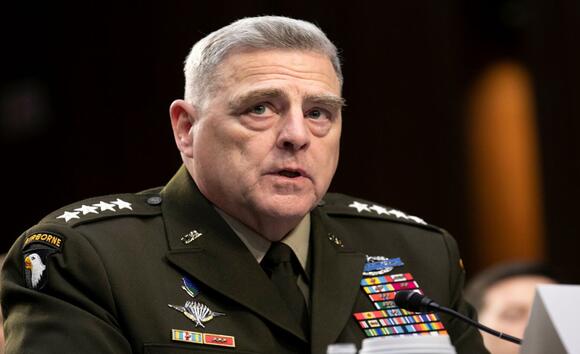 Gen. Mark Milley expressed concern about reports that China has tested a nuclear-capable hypersonic missile, comparing it to the country's own "Sputnik moment," which propelled the Soviets ahead of the United States in the space race.

“What we saw was a very significant event of a test of a hypersonic weapon system. And it is very concerning,” Milley, the chairman of the Joint Chiefs of Staff , said during a Bloomberg Television interview on Wednesday.

“I don’t know if it’s quite a Sputnik moment, but I think it’s very close to that," Milley added. "It has all of our attention.”

Earlier this month, the Financial Times reported that China had “tested a nuclear-capable hypersonic missile” that “circled the globe before speeding towards its target, demonstrating an advanced space capabilities that caught U.S. intelligence by surprise,” citing unnamed sources “briefed on the intelligence.”

China’s Ministry of Foreign Affairs spokesman Zhao Lijian rejected the report days later, saying the test, which occurred in August, was “a spacecraft, not a missile,” adding, "This test was a routine spacecraft experiment to verify the reusable technology of spacecraft, which is of great significance for reducing the cost of spacecraft use."

Milley is the highest-ranking official to speak directly on the reported hypersonic test.

“We have made clear our concerns about the military capabilities China continues to pursue, capabilities that only increase tensions in the region and beyond," Pentagon spokesman John Kirby said shortly after the original report. "That is one reason why we hold China as our No. 1 pacing challenge.”

An object exploded Saturday in the night sky near the Iranian nuclear facility in the town of Natanz, with state television saying it was a missile exercise.
MIDDLE EAST・1 DAY AGO
WashingtonExaminer

Since Deng Xiaoping changed the trajectory of Chinese economic policy in 1978, the People’s Republic of China (PRC) has amassed an impressive record of economic growth. Starting as a poverty-stricken agricultural society under rigid socialist rule, the country has grown steadily and rapidly to become the second largest economy in the world and carved out a growth path whose strength and longevity is historically unprecedented.
CHINA・2 DAYS AGO
WashingtonExaminer

The second-ranking general in the US military has sounded the alarm about China’s weapons development — warning that Beijing may soon have the capability to launch a surprise nuclear strike against America. “They look like a first-use weapon,” Gen. John Hyten, the vice chairman of the Joint Chiefs of Staff,...
MILITARY・18 DAYS AGO

‘Something will happen, I presume’ — Trump appears to predict Chinese action against Taiwan after Olympics

Former president Donald Trump appears to be predicting that China will take aggressive action against Taiwan at the close of the 2022 Winter Olympics because he is no longer in the White House.Mr Trump made the cryptic comments during an interview on GB News with host Nigel Farage.Asked about America’s place in the world under President Joe Biden, Mr Trump claimed that the US is at “the lowest point it's ever been at” because he is no longer president. “I don't think it's ever been in a position like this — we're not respected anymore,” Mr Trump said.The twice-impeached...
SPORTS・4 DAYS AGO
Business Insider

Biden winced when he learned that an ISIS-K suicide bombing had killed US troops in Kabul in late August, per the NYT. "The worst that can happen has happened," Biden said during a White House meeting, the Times reported. Days later, Biden would say that the Afghanistan withdrawal was an...
MILITARY・5 DAYS AGO
The Independent

United States’ satellites are constantly under attack, and China may become the dominant space power by the end of the decade, according to a Space Force general.“The threats are really growing and expanding every single day. And it’s really an evolution of activity that’s been happening for a long time,” General David Thompson, the Space Force’s first vice chief of space operations, told the Washington Post.“We’re really at a point now where there’s a whole host of ways that our space systems can be threatened.”The United States must deal with “reversible attacks” on satellites – those which do not...
MILITARY・3 DAYS AGO
Telegraph

An American nuclear artillery unit has been reactivated in Germany for the first time since the Cold War and is to be armed with new long-range hypersonic weapons. The US Army officially recommissioned the 56th Artillery Command in Germany this week during a ceremony in Mainz-Kastel, which hosts America’s Europe and Africa commands.
MILITARY・25 DAYS AGO

Russia has billed the Checkmate as a light fighter, but that isn't really the case. Some four months since it was officially unveiled, another glut of promotional material has been released relating to the Sukhoi Checkmate ahead of its official foreign debut at the Dubai Airshow next week. Also known as the Light Tactical Aircraft, or LTS in Russian, what we've seen now reveals a fighter that’s substantially bigger than we might have imagined, at least in comparison to the Su-57 Felon. Seeing the two planes alongside each other provides our best view so far of the enigmatic Checkmate fighter project and evidence that this is really more of a medium fighter than a true light combat jet.
AEROSPACE & DEFENSE・22 DAYS AGO
KTSA

While Biden’s military focuses on naming U.S navy ships after a gay rights leader and christened it by a transgender veteran, China’s military has built mockups in the shape of a U.S. aircraft carriers and other U.S. warships. For the last few months there has been a lot of concern about China attacking Taiwan, but are they also plotting an attack on the US? Lars talks about some disturbing new information that could mean just that, with Dr. Weifeng Zhong who is a Senior Research Fellow at the Mercatus Center at George Mason University.
FOREIGN POLICY・26 DAYS AGO
thedrive

Nov. 29 (UPI) -- Russia's defense ministry announced Monday it has carried out another successful test firing of the Zircon hypersonic missile. Defense officials said in a statement the missile was fired from the Northern Fleet frigate Admiral Gorshkov while sailing in the White Sea. The missile's flight "corresponded to...
MILITARY・6 DAYS AGO

William J. Burns confronted the heads of Russia's security and intelligence agencies in Moscow but did not blame Russia, The Washington Post reported.
U.S. POLITICS・10 DAYS AGO
Business Insider

After getting stripped of its F-35s, Turkey wants to buy other US fighter jets, but it won't give up its new Russian weapons to do it

After getting kicked out of the F-35 program, Turkey says it wants to buy more US-made fighter jets. But Turkey refuses to yield on the issue that got it booted: Its purchase of Russian-made weaponry. That dispute is one of several that have strained relations between Ankara and its NATO...
MILITARY・12 DAYS AGO
americanmilitarynews.com

Russian President Vladimir Putin threatened a Russian retaliation if the U.S. or NATO allies cross a “red line” by reinforcing Ukraine by sending certain weapons, such as hypersonic weapons, cruise missiles and missile defense systems, to which he said Russia will match. “If some kind of strike systems appear on...
MILITARY・5 DAYS AGO
albuquerqueexpress.com

Taiwan's president unveiled the country's combat wing of advanced US-made F-16 fighters in a ceremony on Thursday, showing its new Air Force capabilities against mainland China. The event, held at an air base in the southern Taiwanese city of Chiayi, saw the island commission the first combat wing of F-16...
AEROSPACE & DEFENSE・17 DAYS AGO

This MiG Super Fighter Terrified NATO. Then a Soviet Pilot Stole One.

Throughout the early 1970s, the Soviet MiG-25 streaked through the nightmares of America’s military and intelligence communities. If the Cold War were to ever turn hot, they feared, this seemingly unstoppable fighter, code-named Foxbat, appeared poised to sweep the skies of Western aircraft. The first hints of the existence of...
AEROSPACE & DEFENSE・19 DAYS AGO
New York Post

The world is becoming more dangerous under Joe Biden

We hope we’re not the only ones who’ve noticed, but the world has become a more dangerous place since Joe Biden became president. Why? Perhaps because hostile actors sense weakness — and opportunity. Russia poses the most immediate threat: It has mobilized nearly 100,000 troops at the Ukrainian-Russian border and...
PRESIDENTIAL ELECTION・1 DAY AGO
Washington Post

Biden is right that global democracy is at risk. But the threat isn’t China.

If the Biden administration has a foreign policy doctrine, it’s surely the president’s oft-stated vision that democracies are locked in a must-win historic battle with autocracies. “I predict to you your children or grandchildren are going to be doing their doctoral thesis on the issue of who succeeded, autocracy or democracy, because that is what is at stake,”Joe Biden intoned in his first news conference as president.
PRESIDENTIAL ELECTION・2 DAYS AGO
Business Insider

The US has to catch up on Russia and China's hypersonic missile technology, a Space Force general said. Gen. David Thompson said the US has some "catching up" to do. "We're not as advanced as the Chinese or the Russians in terms of hypersonic programs," he said. A Space Force...
MILITARY・14 DAYS AGO