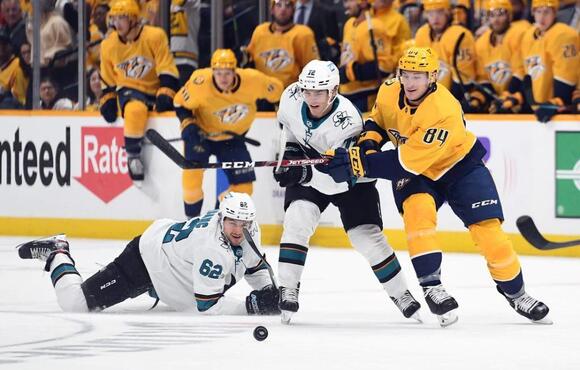 Matt Duchene, Filip Forsberg and Mikael Granlund scored for the Predators, who won their second straight game. Roman Josi had two assists, giving him six points (one goal, five assists) over his past two games.

Timo Meier scored his fourth goal of the season and James Reimer made 23 saves for the Sharks, who have lost two games in a row after winning four straight to open the season.

San Jose’s Nick Bonino was called for tripping just 61 seconds into the game, and Nashville capitalized.

Josi fed Duchene, who entered the offensive zone and beat Reimer with a wrist shot from the high slot at 1:20 of the period for his second goal of the season.

Josi picked up another assist at 12:31 of the second period when he took a pass in the right circle from Dante Fabbro and fed Forsberg in the middle as the Predators made it 2-0.

In the opening minutes of the third period, Josi’s bid for a goal was thwarted when Reimer blocked his shot from the slot.

Saros made back-to-back saves on Meier early in the third period to maintain the 2-0 lead.

Meier and the Sharks finally broke through at 11:54 of the period. Saros blocked Meier’s initial back-hand attempt, but Meier batted the rebound out of the air and past Saros.

Predators forward Ryan Johansen made a huge defensive play when he used his stick to block Jonathan Dahlen’s shot that appeared headed into the net.

Reimer kept the Sharks alive when he stopped Philip Tomasino on a breakaway with 3:50 remaining.

Reimer left for the extra attacker with 1:30 remaining, and Granlund sent a loose puck in front of the Predators net the length of the ice for the empty-net goal with 53 seconds left. 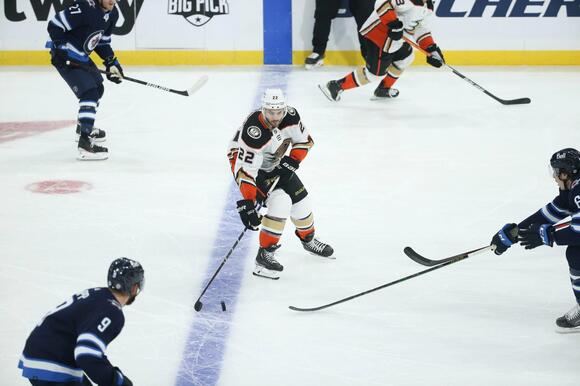 Igor Shesterkin and Alexandar Georgiev combined for 28 saves and the New York Rangers defeated the visiting San Jose Sharks 1-0 on Friday night for their season-high fifth straight win. Shesterkin started the game but was helped off the ice at 5:08 of the third period with an apparent right...
NHL・23 HOURS AGO
NESN

BOSTON — Don Sweeney did not need to say much Tuesday to indicate he is not in agreement with the punishment Brad Marchand received this week. The Boston Bruins winger on Monday was given a three-game suspension for slew-footing Oliver Ekman-Larsson in Sunday’s win over the Vancouver Canucks. Marchand has cleaned up his game in recent years, but his reputation was part of the conversation in his hearing.
NHL・4 DAYS AGO

Tristan Jarry recorded 27 saves in a 2-0 Penguins win against the Maple Leafs. "I'm just going night in and night out focusing on my game doing everything I can, and the guys are doing a great job getting blocks, getting clears when we need to," Jarry said. "I think that has been the key to our success, especially as of lately."
NHL・14 DAYS AGO
Sportsnaut

DETROIT - Jeff Blashill knows which lines and combination of players present the best chance for a win in Saturday's game against the Buffalo Sabres, but the Detroit Red Wings coach isn't ready to show his cards just yet. When asked about the possibility of slotting forward Givani Smith alongside...
NHL・7 DAYS AGO
alvareviewcourier.com

ALVA, Okla. – Northwestern Oklahoma State Rangers hosted the Thunder of Manhattan Christian last Saturday afternoon. The season has taken off; the Rangers are on a three-game winning streak as they pulled off a 96-76 win over the Thunder. The Rangers took over the game from a late second-half run to close the game strong.
BASKETBALL・9 DAYS AGO

Different building. Different opponent. Same result — in virtually a carbon copy of the last time the Tucson Roadrunners took the ice. This time, it was a 4-1 win for the Roadrunners (6-6-1-0) over the visiting Abbotsford Canucks (4-5-2-1). The victory, marking the first time this season Tucson has won back-to-back games, moves the Roadrunners back to .500 on the season. They’ll have a shot at their first true winning streak of the season Saturday in the rematch at 7 p.m. in Tucson Arena.
NHL・8 DAYS AGO
Sportsnaut

With Dustin Tokarski in COVID-19 protocols, there a good chance that newly acquired goalie Malcolm Subban will make his Sabres debut on Saturday. His last game in the NHL was for the Chicago Blackhawks back on May 3
NHL・11 HOURS AGO

The Columbus Blue Jackets placed goaltender Joonas Korpisalo on injured reserve as he remains sidelined with a non-COVID illness. The
NHL・1 DAY AGO
Sportsnaut

Blues have 'beer league' goalie on bench in tonight's game

The St. Louis Blues are really hoping they won’t have to use their backup goalie in Thursday’s game. But if needed, emergency backup goalie Kyle Konin will be dressed and ready to go.
NHL・2 DAYS AGO
Sportsnaut

Josh Norris scored on a rebound with 5:54 remaining as the Ottawa Senators broke a six-game losing streak by defeating
NHL・2 DAYS AGO
San Diego Union-Tribune

Arizona Coyotes deny reports that team is for sale

The Arizona Coyotes are denying a Forbes.com report that claims the franchise is for sale and could relocate to Houston.
NHL・2 DAYS AGO
Sportsnaut