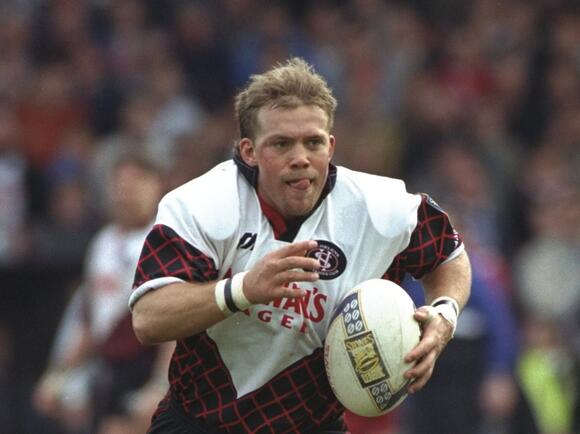 A group of former players are planning to sue the Rugby Football League (RFL) for negligence over what they say was a failure to protect them from the risks of concussion during their careers.

Bobbie Goulding, Paul Highton and Jason Roach are part of a test group of 10 ex-professionals involved in the action against the governing body. The three men have been diagnosed with early-onset dementia and probable CTE – chronic traumatic encephalopathy – which is a progressive brain condition thought to be caused by repeated blows to the head.

The players allege in a letter being sent to the RFL that, given the significant risk of serious or permanent brain damage caused by concussions, the governing body “owed them, as individual professional players, a duty to take reasonable care for their safety by establishing and implementing rules in respect of the assessment, diagnosis and treatment of actual or suspected concussive and sub-concussive injuries”.

The group is represented by Richard Boardman of Rylands Law, the firm which has also launched an action on behalf of ex-rugby union players against World Rugby , the Rugby Football Union and the Welsh Rugby Union.

Boardman is representing a wider group of more than 50 players, ranging in age from their 20s to their 50s, many of whom are showing symptoms associated with neurological complications.

Goulding, 49, played for 17 years as a professional, representing Great Britain, Wigan, Widnes, Leeds and St Helens. He was diagnosed earlier this month, having battled alcohol and drug addiction earlier in his life.

Highton, 44, played over 200 Super League games and, like Goulding, he was diagnosed earlier this month.

So too was Roach, 50, a former Scotland international who played for various top clubs in England in a career spanning more than a decade. 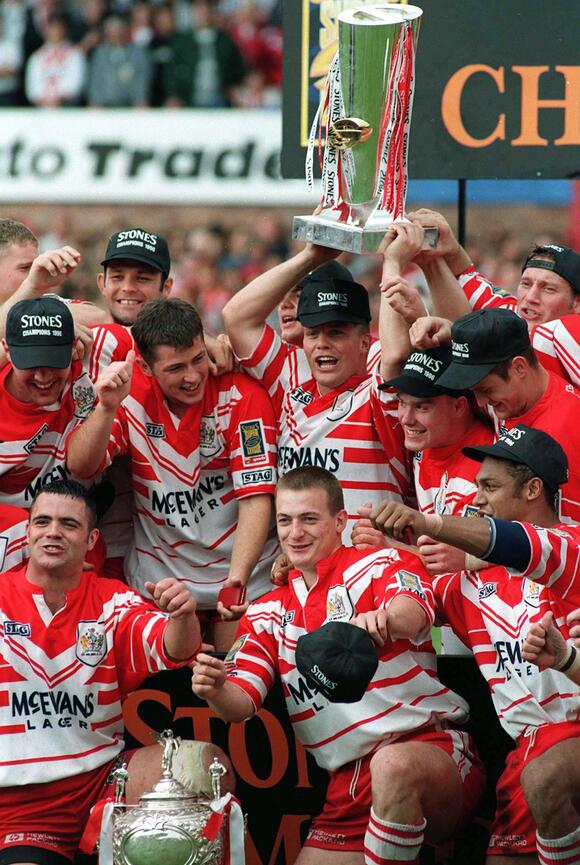 Roach said he started to notice something was amiss in his late 30s when he would repeat himself, and also had no recollection of crashing his vehicle and then acting in a threatening manner.

He said he had become “reclusive”, adding: “I used to be sociable, outgoing, Jack the lad, funny, life and soul of the party. I would go out on my own, I’d be one of the lads, probably the alpha male in a bunch of alpha males. I was the alpha alpha male.

“I’ve now gone to not wanting to do anything, frightened of situations. I now start doing things and when I come to an outcome, I don’t know how I got there.”

Another member of the group is Michael Edwards. The 48-year-old played for Oldham, Leigh and St Helens among others in the 1990s, as well as at national level for Wales. He now runs a bar with his partner in the northwest of England, but his memory is so poor he cannot fulfil any administrative work related to his business.

Edwards told the PA news agency he felt as though he had been treated “like a piece of meat” and said that the sport felt “like the Wild West” during his playing days.

He says his condition has robbed him of the memories of his playing days and he has to refer to scrapbooks or videos to remind himself.

Boardman said: “The vast majority of the former players we represent love the game and don’t want to see it harmed in any way. They just want to make it safer so current and future generations don’t end up like them.

“Younger players such as Stevie Ward and Sam Burgess have recently spoken publicly about their own brain damage, so these issues aren’t restricted to older generations.

“This is why we’re asking the RFL to make a number of immediate, relatively low-cost changes to save the sport, such as limiting contact in training and extending the return to play [following a concussion].”

Governing body the RFL follows the 2016 Berlin Consensus Statement on Concussion In Sport, which is considered best practice by many sports bodies.

All professional rugby league matches have at least one doctor in attendance who is qualified to provide immediate on-field treatment, many have two and some Super League games have four.

Two clinical groups, one of which includes representation from the Rugby League Players’ Association (RLPA), make recommendations on medical standards and best practice to the RFL.

Players are given a baseline cognitive function test at the start of each season before they engage in any contact training, and this baseline informs decisions taken as part of the graduated return-to-play (GRTP) protocols to ensure players have fully recovered from any concussion they suffer.

Players suspected of suffering a concussion in a match are taken off the pitch and assessed for 15 minutes, during which time the player can be replaced by a free interchange. The RFL’s Laws Committee regularly discusses and considers steps which seek to reduce contact with the head.

Featherstone may have been denied a place in Super League thanks to a Million Pound Game defeat to Toulouse, but the Rovers seem to have no problem attracting high profile names to the club. Last year Fa’amanu Brown starred for the Rovers and ahead of next season they’ve brought in...
RUGBY・12 DAYS AGO
The Guardian

World Rugby launched an education campaign on Wednesday to increase awareness of brain health within the sport and set up a network of free brain health clinics for former elite players. The Brain Health Initiative, supported by national unions and the International Rugby Players association, includes an educational video where...
RUGBY・9 DAYS AGO
The Guardian

Each year, there is that same old debate about which rivalry trumps which. Creating such an article and ranking the top ten rivalries in British Rugby League will always cause some controversy as fans battle for the number one spot. However, here are my rankings for the top ten. 10....
RUGBY・3 DAYS AGO
insidersport.com

Pulseroll has partnered with England Rugby League as the official muscle recovery supplier of the England Men’s, Women’s and Wheelchair teams. The British muscle recovery brand will support all three England Rugby League sides as they prepare for next year’s re-scheduled home World Cup (RLWC2021), which will now kick off at Newcastle’s St James’s Park in October 2022.
RUGBY・4 DAYS AGO
104.1 WIKY

(Reuters) – International rugby players will be allowed to switch national teams from next year subject to certain criteria, the World Rugby Council announced on Wednesday. The revised regulation will apply from Jan. 1 and a player must either be born in the country to which they wish to transfer or have a parent or grandparent born in that nation.
RUGBY・3 DAYS AGO
albuquerqueexpress.com

Durham [UK], November 24 (ANI): According to a study, professional rugby players are more likely to show signs of poor mental health, such as depression and anxiety compared to amateur ones and non-contact athletes. The research has been published in the journal 'Sports Medicine'. The retired elite rugby players in...
MENTAL HEALTH・3 DAYS AGO

South Africa and Rassie Erasmus have withdrawn their intention to appeal against the sanctions imposed on him for making an hour-long video criticizing a referee during the series against the British and Irish Lions
SAN DIEGO, CA・1 DAY AGO
The Independent

Super League champions St Helens will open and close the regular season in 2022 with a French double.Kristian Woolf’s men will launch their bid for an unprecedented fourth successive Super League title at home to Catalans Dragons in a repeat of the 2021 Grand Final on Thursday, 10 February.Seven months later, on Saturday, September 3, Saints will welcome promoted Toulouse to the Totally Wicked Stadium for their 27th and final fixture before the play-offs.Super League has retained the top-six play-off system in use for the last two years and clubs will play four loop fixtures on top of their home...
RUGBY・2 DAYS AGO
San Diego Union-Tribune

The long-awaited fan-led review of football has been published and calls for an independent regulator to be set up as well as suggesting a 10 per cent levy on transfers from overseas and between top-flight clubs. Some of the other recommendations led by former sports minister Tracey Crouch include trialling...
PREMIER LEAGUE・1 DAY AGO
seriousaboutrl.com

Super League has confirmed that ten matches will be screened live by Channel 4 over each of the next two seasons. It is the first time ever that the Super League will be shown on free-to-air TV in what is a groundbreaking, exciting new move for the sport of rugby league.
RUGBY・3 DAYS AGO
The Independent

Like so many government initiatives, it is hard to put too much faith in Tracey Crouch’s fan-led review of football governance. Most of the problems in the game detailed in the 162-page document are obvious. The solutions are more opaque.The main recommendation by the Conservative MP for Chatham and Aylesford and her 10-person panel of experts is that Parliament passes legislation to create an Independent Regulator for English Football (IREF). To do this would require strong political will.Organisations like the Football Supporters’ Association (FSA) have come out strongly in favour of the ideas expressed in the report. The English Football...
PREMIER LEAGUE・2 DAYS AGO
The Independent

The UK’s football policing lead says it is “bizarre” that the fan-led review has called for a pilot allowing the consumption of alcohol in sight of the pitch just months after the disorder at the Euro 2020 final.Chief Constable Mark Roberts of Cheshire Police also accused the review panel of failing to consult with the police before making its recommendations.The review has called for a small-scale pilot in the Vanarama National League and Sky Bet League Two and for the Department of Digital, Culture, Media and Sport, the Home Office and the UK Football Policing Unit to work closely together...
SPORTS・2 DAYS AGO
The Guardian

Weekend football countdown: Get the latest from David Tindall as the 12-team draw for the European qualifying play-offs takes place
PREMIER LEAGUE・21 HOURS AGO
The Independent

Michael Vaughan has apologised for the pain Azeem Rafiq has experienced amid his former Yorkshire team-mate’s allegations of racism.Rafiq told MPs earlier this month of the “inhuman” treatment he suffered during his time at Yorkshire, with Vaughan among a number of figures implicated in the case.Former England captain Vaughan denied claims he said “too many of you lot, we need to do something about it” to Rafiq and three other Asian players before a Yorkshire match in 2009.He has been left off the BBC team for the upcoming Ashes tour of Australia due to a potential “conflict of interest”.And in...
SOCIETY・4 HOURS AGO
The Independent

Premier League chief executive Richard Masters says Newcastle’s owners can be removed should the Saudi state be found to control the club.Newcastle were taken over by a consortium led by Saudi Arabia’s Public Investment Fund – who the country’s Crown Prince is chairman of – last month.Masters said the Premier League had received “legally binding assurances” that the Saudi state would not control the club.“The issue is about control and we resolved the issue of control,” Masters told the BBC.“There are legally-binding assurances that the state will not be in control of the club.“If we find evidence to the contrary...
PREMIER LEAGUE・3 HOURS AGO
The Independent

Crystal Palace’s official LGBTQ+ supporters’ group have called on those at the top of the game to “put action behind your words” ahead of the start of this year’s Rainbow Laces campaign.Stonewall’s initiative, now in its sixth year, launched on Thursday and will culminate on December 8 when the Rainbow Laces’ new look will be displayed across Wembley Stadium in a show of support from the Football Association.Premier League clubs will raise awareness on the issue of inclusion during the next three matchdays but Proud and Palace have urged the governing body and FA to become better allies.The theme of...
PREMIER LEAGUE・1 HOUR AGO