10 Things in Politics: Inside the Kamala Harris campaign diaspora 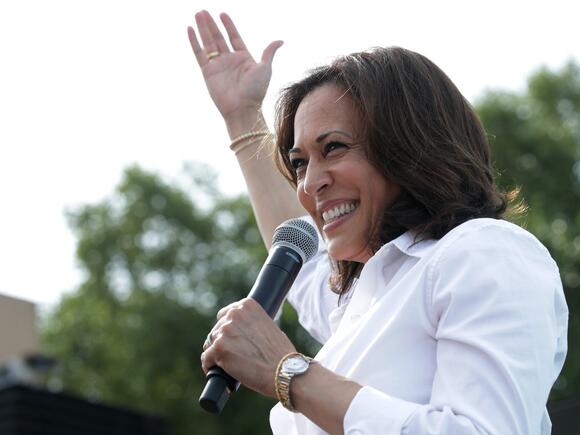 Welcome back to 10 Things in Politics . Sign up here to receive this newsletter . Plus, download Insider's app for news on the go - click here for iOS and here for Android . Send tips to bgriffiths@insider.com .

Here's what we're talking about:

1. THE WHITE HOUSE: Only three of Vice President Kamala Harris' campaign staffers are working on her White House team. But the key people who helped position Harris for her historic election are not far away either. Many former campaign staffers now have top administration jobs.

Here's a look at where some of the top Harris alums have landed:

Check out Insider's entire list of where 52 former Kamala Harris staffers are now.

2. Elon Musk slams Democrats' possible billionaire tax: Musk ripped the idea, arguing it was the start of a new campaign from Democrats to redistribute wealth from the richest Americans. "Eventually, they run out of other people's money and then they come for you," he wrote on Twitter. Democrats are considering a plan that would impose taxes on tradable assets like stocks held by about 700 billionaires to fund an expansion of healthcare and childcare and to renew President Joe Biden's beefed-up child tax credit. Here's what else you need to know about the billionaire tax .

3. These five decisions could shake up crypto: Lobbyists tell Insider they're paying particularly close attention to Congress, the Treasury Department, and White House executive orders regarding digital assets. One of the issues they are closely tracking is whether Biden will issue an executive order requiring more regulation and oversight of cryptocurrencies. Read more about what crypto lobbyists are closely tracking in Washington .

4. FDA moves closer to OKing a COVID-19 vaccine for younger kids: A coronavirus vaccine for elementary-school-age children is closer than ever to reality after a Food and Drug Administration expert panel voted in support of offering Pfizer-BioNTech's shot to 5- to 11-year-old children. The vaccine would be the first authorized for younger children, though the Centers for Disease Control and Prevention still has to sign off too. Experts disagreed on whether every child should get the shot or whether it should be targeted to more at-risk kids .

6. UN trashes lackluster global climate efforts: UN Secretary-General António Guterres said in a speech that countries were "utterly failing" to address the climate crisis. Guterres based his dismal view on a UN report that found countries' pledges to reduce carbon emissions were falling significantly short of targets. "The emissions gap is the result of a leadership gap," Guterres told reporters. World leaders are set to meet in a highly anticipated UN climate summit in Glasgow, Scotland, next week .

7. Lawmakers are expected to subpoena the lawyer who told Pence he could overturn the election: Rep. Bennie Thompson, the chair of the House select committee investigating the insurrection, said his panel would subpoena the conservative lawyer John Eastman, The Washington Post reports. Eastman, in now-infamous memos, made the case that Pence had the power to unilaterally overturn the election results when Congress met to certify them on January 6, a position Pence ultimately rejected. More on the news .

8. America is in store for an expensive Thanksgiving: "Nearly every component of the traditional American Thanksgiving dinner, from the disposable aluminum turkey roasting pan to the coffee and pie, will cost more this year, according to agricultural economists, farmers and grocery executives," The New York Times reports. There's no single reason to blame for turkey day gobbling up more of your wallet, though supply-chain issues and inflation are part of the problem .

9. Trump endorses Brazilian President Jair Bolsonaro: Trump announced his endorsement of Bolsonaro just hours after the incumbent had criminal charges recommended against him by a Brazilian Senate committee for his pandemic response. A six-month inquiry into Bolsonaro's response found he had repeatedly promoted dangerous, false claims about COVID-19 and had tried to stop the nation's Congress from introducing public-health mandates around masks. "Brazil is lucky to have a man such as Jair Bolsonaro working for them," Trump said .

10. Astronomers may have found a planet beyond the Milky Way: If true, this would be the first planet discovered in another galaxy. A global team of astronomers used NASA's Chandra X-ray telescope to study what is either a black hole or a neutron star in a distant galaxy. Something appeared to pass in front of that object, suggesting a planet might be orbiting it. The breakthrough offers early evidence that this X-ray technique could be used to find planets in other galaxies .

Today's trivia question: The Atlanta Braves took a one-game lead in the World Series with a 6-2 opening win against the Houston Astros . Speaking of the Fall Classic, who was the first president to attend a World Series game? Email your answer and a suggested question to me at bgriffiths@insider.com .

What on earth is that idiotic smile about? Self satisfaction? She's obviously very pleased with herself. Well, that make 1! Absolutely nobody else is.Yes, I voted for her and Biden, but little did I know she is the lowest common denominator. Biden has his Palin and we need to worry.

Wipe that smile off her faces Nothing in this world is so funny right now. What is wrong with her? She’s not helping the polls for our President, we voted for her? Fire her and get a strong man in there.

She only cares about herself and moving her friends into jobs where they can be hateful to those who work for them. Worst vp ever. Such a sad administration ruining our country try one day at a time.

Hours before the deadly attack on the US Capitol this year, Donald Trump made several calls from the White House to top lieutenants at the Willard hotel in Washington and talked about ways to stop the certification of Joe Biden’s election win from taking place on 6 January. The former...
PRESIDENTIAL ELECTION・21 HOURS AGO
Fox News

As Christine Pelosi's potential political future again hit the news, the daughter of House Speaker Nancy Pelosi devoted some of the last week to dwelling on 2016, the year she stepped into the national spotlight in her own right. . Days after Politico reported buzz is building that the younger Pelosi...
PRESIDENTIAL ELECTION・11 HOURS AGO
Newsweek

The president has repeatedly spoken of his desire to unite the nation, but the polling results suggested divides remain.
PRESIDENTIAL ELECTION・18 HOURS AGO
Washington Post

Panicked Democrats are ready to shove Biden aside. Again.

Ten months into President Biden’s term, panicky Democrats have already begun to speculate on who might take his place on the ticket in 2024, despite Biden’s assurances that he intends to stand for reelection. Opinions to start the day, in your inbox. Sign up. A Post story last weekend contained...
PRESIDENTIAL ELECTION・1 DAY AGO

"It will be a ratings bonanza for television," said the former president in a statement.
PRESIDENTIAL ELECTION・1 DAY AGO
TIME

This article is part of the The DC Brief, TIME’s politics newsletter. Sign up here to get stories like this sent to your inbox every weekday. It’s not hyperbole to say Joe Biden’s childhood home state of Pennsylvania put him in the White House. It was The Associated Press’ call of that state’s outcome at 11:25 a.m. on Saturday, Nov. 7, of last year that made it official that the son of Scranton would be heading back to Washington and into a job he’s coveted since his 20s. The counting in Pennsylvania took four days and it was closer than anyone in the Biden campaign wanted. But the Keystone State came through for Biden, who had early on recognized the state as a lynchpin for his strategy and even headquartered his campaign near Philadelphia’s City Hall. (Well, at least until COVID-19 mothballed that operation and sent everyone working from kitchen stools and basement couches.)
PENNSYLVANIA STATE・9 HOURS AGO
Washington Examiner

Why Biden’s approval ratings have sunk

By Clodagh Harrington, De Montfort University Ten months into his presidency, Joe Biden’s poll numbers are, by any measure, lukewarm. According to the latest figures, taken on Nov. 24, only 43 percent of Americans approve of his performance in office, while a majority think he is not doing a good job. In a week when […] The post Why Biden’s approval ratings have sunk appeared first on Virginia Mercury.
PRESIDENTIAL ELECTION・22 HOURS AGO

A Hill-HarrisX poll recently named some of their presidential bets in the 2024 election if Joe Biden won't run for POTUS again. According to reports, the group's presidential bets include Michelle Obama, Kamala Harris, Pete Buttigieg, Bernie Sanders, and Michael Bloomberg. Out of the five, the incumbent Vice President has the most support. Lagging closely behind her is ex-FLOTUS, Obama.
PRESIDENTIAL ELECTION・2 DAYS AGO
Washington Post

It used to be standard practice for the leaders of the opposition to say, upon the inauguration of a new president, that they hoped he would succeed. It may not have been sincere, but it was considered good form to publicly wish for peace and prosperity even if the other party would get the credit.
PRESIDENTIAL ELECTION・10 HOURS AGO
Business Insider

Former President Donald Trump said he'll win the GOP nomination "very easily" if he were to run in the 2024 election. "Most people have said if I run, they won't run against me so I think that's good," Trump said. An October poll found strong support among Republicans for a...
PRESIDENTIAL ELECTION・2 DAYS AGO

How Biden and Trump actually compare on coronavirus deaths

The United States passed yet another grim coronavirus milestone n November: We have now seen more deaths from the virus in 2021 than we did in all of 2020 — despite the advent of vaccines. Naturally, this has led to plenty of partisan politicking, with conservatives and Republicans using it...
PRESIDENTIAL ELECTION・11 HOURS AGO
Vanity Fair

Ahead of his likely reelection run in 2024, Donald Trump is building an infrastructure for insurrection. The “fraud” cries on social media, the desperate begging of administrators to “find” votes for him, the blustery calls for his supporters to “fight” for him—all that may be so last year. Now, he and his allies are trying to lay the foundation to allow him to undermine democracy without resorting to such overt measures.
PRESIDENTIAL ELECTION・1 DAY AGO
Washington Examiner

One of Joe Biden’s greatest political vulnerabilities going into next year is a mutating virus . Voters do not seem to be rewarding President Biden for his big-dollar legislative accomplishments. He’s getting declining marks in polls for his handling of the pandemic, despite having signed into law trillions of dollars in pandemic funding and ensuring there are enough vaccines to protect those willing to get them. His approval rating has dropped to the low 40s.
PRESIDENTIAL ELECTION・23 HOURS AGO

Dems want Biden to start swinging at Republicans. Allies aren’t sure he can.

Inside the White House a debate rages over how hard the president should attack Republicans heading into the midterms.
PRESIDENTIAL ELECTION・1 DAY AGO
Business Insider

Insider asked Republicans poised to take charge what they'd do if American voters decide to put them back in the majority in Congress.
U.S. POLITICS・5 HOURS AGO
BIN: Black Information Network

10 Things in Politics: Inside Buttigieg's emails to staffers

And the CDC urges all adults to get boosters amid Omicron concerns.
CONGRESS & COURTS・17 HOURS AGO