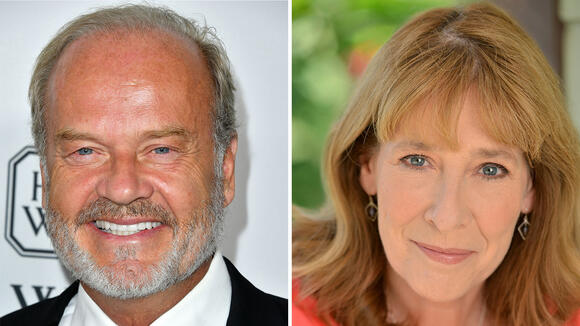 Frasier star Kelsey Grammer and Downton Abbey ‘s Phyllis Logan are uniting for high concept thriller No Way Up , being introduced to buyers at next week’s American Film Market by Altitude Film Entertainment.

Described by the filmmakers as a “rollercoaster combination of disaster movie and survival thriller,” No Way Up follows two characters from very different backgrounds that are thrown together when the plane they are traveling on crashes into the Pacific Ocean. The stricken airliner comes to rest perilously close to the edge of a bottomless ravine with the surviving passengers and crew trapped in an air pocket. With their air supply rapidly running out, a nightmare fight for survival ensues as dangers from all sides hone in on them.

The film will be directed by Claudio Fäh from a screenplay by Andy Mayson, with further casting set to be announced. A spring 2022 shoot is planned in Malta.

Fäh, whose credits include Northmen — A Viking Saga as well as two entries in the Sniper franchise for Sony, just wrapped production on the fourth season of Swiss hit crime series Wilder .

Will Clarke, Andy Mayson and Mike Runagall will produce for Altitude, which is currently in production on Butcher’s Crossing starring Nicolas Cage. Other producers include BAFTA winner Annalise Davis ( Up There , The Railway Man ) and Molly Conners ( Birdman , Frozen River , Butcher’s Crossing ).

“ No Way Up is a gripping story of survival in the extreme,” said Fäh. “A rollercoaster ride filled with suspense and thrills, with a group of wonderfully crafted characters who are driving this story, overcoming seemingly insurmountable obstacles. To bring them to life with a cast of this calibre is a wonderful opportunity.”

Runagall added: “As we continue to further our own production ambitions, we’re thrilled to bring this arresting and highly commercial project to worldwide buyers.”

Grammer is represented by UTA and Vault Entertainment, while Logan is represented by Conway Van Gelder Grant and SMS Talent. Fäh is repped by David Saunders at APA, Jon Huddle at Fourth Wall Management and Eric Feig.

Netflix’s The Lost Daughter, directed by Maggie Gyllenhaal, dominated the 2021 Gotham Awards in New York on Monday night. The film, which went into the event as a five-time nominee, won four awards, including the top prize of best feature. After a quick speech thanking her loved ones and collaborators for best screenplay, Gyllenhaal declared she’d deliver a “real speech” for her second win of the evening, for breakthrough director. “It’s expensive to make movies,” said Gyllenhaal in her second acceptance speech. “Movies cost a lot of money. you can write them, but someone’s got to make them. So then the question becomes,...
MOVIES・2 DAYS AGO
The Hollywood Reporter

Toward the beginning of the new HBO documentary Adrienne, director Andy Ostroy walks up and down the line at a Broadway theater asking people if they’d heard of Adrienne Shelly. One after another, potential attendees of the musical Waitress sheepishly admit that they have not, before finally one guy looks up at the marquee and notices “Based Upon the Motion Picture Written By Adrienne Shelly.” This captures the strange and specific and tragic nature of Shelly’s fame. Movie nerds know her as the star of several pivotal Hal Hartley films, but Waitress has been a theatrical blockbuster in New York, London and...
MOVIES・19 HOURS AGO
Popculture

Nicolas Cage has taken on some dark and intense roles over the past several years, and now the actor is set to play an iconic horror character. According to The Hollywood Reporter, Cage has been cast as Dracula in Renfield, a film about Dracula's often-misunderstood right-hand man. Nicholas Holt (The Great, X-Men: First Class) has been cast as the titular character and will face off against Cage's father of the bloodthirsty undead.
MOVIES・1 DAY AGO

Don't be surprised if Doctor Frasier Crane shows up behind your local bar pouring you an ice cold beer! Of course, I'm actually referring to esteemed actor Kelsey Grammer. He was proudly tending bar at Ellery's in Middlesex this week, to promote beer from his Castkills brewery, Faith American Brewing Company and this is not his last stop in New Jersey...
MUSIC・13 DAYS AGO
Outsider.com

He has been acting for more than 40 years, and now Cheers star Kelsey Grammer is opening up about the advice he gave to his daughters, Greer and Spencer, about show business. During a September 2021 interview with Fox News, Kelsey Grammer stated that he gave his daughters, who are also in show business, advice about how to approach life. “Once in a while, they’ve asked me a specific question about a character or something like that. And I try to just impart them what I think is the best way to go about working on a role.”
CELEBRITIES・14 DAYS AGO
Collider

Jane Campion and Jonny Greenwood Discuss the Dark, Complicated Score in ‘The Power of the Dog’

Jonny Greenwood’s score for Jane Campion’s “The Power of the Dog” is dark and complicated, just like its characters. Campion’s latest film has garnered critical acclaim and could land her a historic best director nomination at the Academy Awards. Benedict Cumberbatch stars as Phil Burbank, a complex cowboy living on the family ranch and whose life is disrupted when his brother brings home a new wife, Rose (Kristen Dunst), and son, Peter, played by Kodi-Smit McPhee. In a new video from the Netflix Playlist Series, Campion and Greenwood discuss the score and their collaborative process. While Campion trusted the composer entirely, she calls...
MOVIES・2 DAYS AGO

Nicolas Cage is set to play Dracula in Universal’s “Renfield,” a monster movie centering not on the infamous vampire, but rather his notorious lackey. The call sheet may be confusing. That’s because Cage is starring alongside another Nic, Nicholas Hoult, who is portraying the unhinged henchman known as Renfield. An origin story, the upcoming film is expected to take place in the present day. It’s not clear how much it will stick to the source material, Bram Stoker’s 1897 horror novel “Dracula.” In the literary thriller, R.M. Renfield was an inmate at a lunatic asylum. He was thought to be suffering from...
MOVIES・1 DAY AGO
The Hollywood Reporter

Awkwafina, coming off a leading turn in Marvel’s Shang-Chi and the Legend of the Ten Rings, is joining Nicholas Hoult and Nicolas Cage in Universal Pictures’ monster movie Renfield. Chris McKay, the helmer behind Amazon’s The Tomorrow War and The Lego Batman Movie, is directing the feature project, which is due to begin shooting early next year in New Orleans. Hoult is starring as the titular character, the infamous acolyte and henchman of Count Dracula, who will be played by Cage. Renfield first appeared in Bram Stoker’s 1897 novel Dracula as a patient in an asylum obsessed with drinking blood, deluded into thinking he will find immortality...
MOVIES・19 HOURS AGO
Variety

Apple has ordered a thriller series that hails from Alfonso Cuarón with Cate Blanchett and Kevin Kline set to star, Variety has learned. The show is titled “Disclaimer” and is based on the novel of the same name by Renee Knight. Blanchett stars as Catherine Ravenscroft, a successful and respected television documentary journalist whose work has been built on revealing the concealed transgressions of long-respected institutions. When an intriguing novel written by a widower (Kline) appears on her bedside table, she is horrified to realize she is a key character in a story that she had hoped was long buried in the...
MOVIES・22 HOURS AGO
Deadline

Cult and controversial actor-director Vincent Gallo is returning to acting after a near decade-long absence from features. Quietly, Gallo took on one of the lead roles in D.J. Caruso’s (xXx: Return Of Xander Cage, Disturbia) movie thriller Shut In, which is the first original movie from conservative media outlet-turned film producer The Daily Wire. The project marks Gallo’s first feature acting role since 2013 film The Human Trust. The actor-filmmaker, now 60, is best known for directing controversial indie movie The Brown Bunny (2003) with Chloe Sevigny and Christina Ricci starrer Buffalo 66 (1998), and for leading cast in Francis Ford Coppola’s 2009 film...
MOVIES・15 HOURS AGO

Alan Ruck gets one question more than any other about Ferris Bueller’s Day Off — and yes, it is about that gorgeous 1961 Ferrari 250 GT California Spyder. The Succession star on Monday dropped by Jimmy Kimmel Live! to mostly discuss the hit HBO series. But, of course, his 1986 John Hughes comedy classic was mentioned. Always a good sport about the topic, Ruck revealed how much he got paid to play Cameron Frye, Ferris’ best friend, and what he gets asked most by Bueller fans on the street. “I made $40,000,” Ruck told Kimmel. “It was my first big part in a...
CELEBRITIES・1 DAY AGO
The Hollywood Reporter

The observation that men are the real monsters in Guillermo del Toro movies has become so vividly self-evident that it now offers all the same insight of noting that Quentin Tarantino loves feet, or that the old guy who popped up in the first two dozen MCU films had something to do with the comics that inspired them. “The Shape of Water” may have been a bold choice for Best Picture, but that Oscar-winning fable about a mute cleaning lady who falls in love with an imprisoned fishman stretched del Toro’s lifelong obsession with poignant genre stories to a fairy-tale ending....
MOVIES・9 HOURS AGO
Collider

Blumhouse has released the trailer for one of their latest films, American Refugee, created in a collaboration between Blumhouse Television and Epix. The two companies have teamed up for a whole slate of horror/thriller films to be premiered on Epix. American Refugee is a new thriller film that follows a...
MOVIES・12 DAYS AGO
Daily Mail

Keeley Hawes is set to star in new BBC One drama Crossfire. The actress, 45, will lead the cast of the three-part series that has been created and written by Louise Doughty in her first original series for television in association with Buddy Club Productions. Set on a luxury resort...
CELEBRITIES・10 DAYS AGO
Deadline

EXCLUSIVE: The shocking success of Squid Game has created an appetite for survival projects. Tristar Pictures just preemptively acquired Ultra, a survival thriller spec script by Colin Bannon. Sugar 23’s Sukee Chew is producing. They are keeping the details under wraps, and Bannon wrote this well before Squid Game. But sources tell me that the protagonist is an ultra marathon runner involved in a deadly race. Bannon is fast becoming the go-to writer for survival thriller/horror projects, having previously sold his Black List script First Ascent to Netflix in a frenzied bidding war. Jake Scott is directing. The plan is to put Ultra into production by the middle of next year. Chew most recently joined Sugar23 and before that she founded Hopscotch Pictures. Her other projects include the Helen Keller drama Helen & Teacher written by Laetitia Mikles and Wash Westmoreland with Millie Simmonds and Rachel Brosnahan starring, and Westmoreland set to direct. She also set the thrillers Dead of Winter, by Sarah Conradt, set up at Netflix, with Mike Gan directing, and Lost Sun,  a spec by Peter Barnes she set up at MGM. Ultra will be shepherded by TriStar’s Caellum Allan. Bannon is repped by Verve, Sugar23, and Leslie Abell APC.
MOVIES・13 DAYS AGO