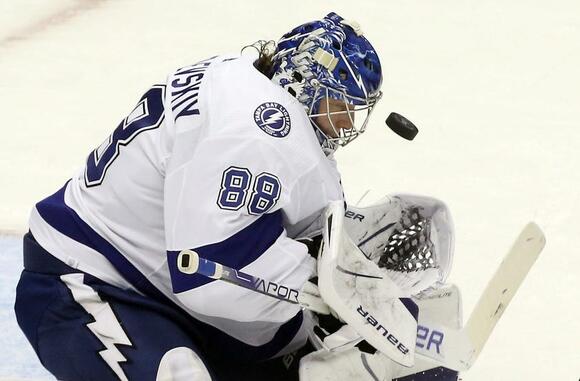 PITTSBURGH (93.7 The Fan) – It may have cost the Pens the game, but in today’s age of vitriol how refreshing that not only did a ref admit to making a mistake. The coach forgave him.

It was just over five minutes left in a scoreless first period in what ended up a 5-1 Tampa Bay win.  Brock McGinn’s high shot initially stopped by Tampa Bay goalie Andrei Vasilevskiy.  The puck would climb over his back and tapped in by McGinn, who had headed to the net in what appeared to be a 1-0 Pens lead.

However the play was whistled dead.  What happened next is something we don’t see enough.  Accountability.

“The referee came over and said he made a mistake,” said Pens head coach Mike Sullivan.  “He lost sight of the puck.  He was on the backside of the goaltender.  He didn’t see it.  It was a quick whistle.”

Then what else was good to see.  Instead of a coach using it as an excuse or ranting about needing replay.

“I was appreciative of his honesty.” Sullivan said.  “That’s hockey.  There is a human element sometimes to it.  Obviously it would have been a big goal for us from a momentum standpoint.”

Accountability and forgiveness, good to see those qualities.

Along with the disallowed goal, it was a feisty first period with seven penalties totaling 20 minutes, much of the fighting stemmed from what the Lightning thought was a boarding by Sam Lafferty against Ryan McDonagh.  McDonagh went after Lafferty and on his first shift back, Tampa’s Corey Perry sought out and fought Lafferty.

“Sam made an impact on the game,” Sullivan said.  “Sam gets in on the forecheck and gets a big hit.  It kind of got our guys into the hockey game a little bit.  That’s the type of impact Sam can have.”

Brayden Point got a 150-foot pass from Mikhail Sergachev for a 2-on-1 and Point buried the backhand for the first goal just as the second period began.  After a flurry by the Pens at the Tampa Bay net for around a minute, Ondrej Palat got a breakaway to make it 2-0.

“We had plenty of chances to score in those couple of shifts,” said forward Jason Zucker.  “I think we passed up too many shots in the grand scheme of the game.  We were looking for one extra play multiple times.  That was a tough turn when I thought we were playing pretty well.”

McDonagh stepped into a slapper for the 3-0 lead seconds later.

Sergachev would make it 4-0 on an empty netter in the third period.  Zucker took advantage of a late penalty, stuffing home a Jake Guentzel rebound to make it 4-1.  Another unassisted goal as Alex Killorn scored into another empty net for the 5-1 final.

While taking part in an optional morning skate Tuesday, Sidney Crosby did not return.  Pens are scheduled to practice on Wednesday, it appears Crosby’s return could happen this week.

Quote of the Night

Asked if some of the young Pens players could find themselves winning jobs by their play even as other players return.

“I’m pretty confident Sid is going to get a spot in the lineup, if that’s what you are asking,” Sullivan said with a smile.

Pens host Calgary Thursday at 7p.  The Flames are 4-1-1 and coming off a win in New Jersey.

Penguins announce deal with FSG, Lemieux and Burkle to stay on

The Pittsburgh Penguins are one step close to being sold to the Fenway Sports Group with former majority co-owners Mario Lemieux and Ron Burkle both staying part of the ownership group.
NHL・4 DAYS AGO
NHL

Center had disk replacement Nov. 12 following trade from Sabres. Jack Eichel is skating less than three weeks after having neck surgery, according to an Instagram post by Brandon Wong Hockey on Thursday. The Vegas Golden Knights center had an artificial disk replacement (ADR) surgery Nov. 12, a procedure that...
NHL・1 DAY AGO
Sportsnaut

The Seattle Kraken placed goaltender Chris Driedger and forward Calle Jarnkrok on injured reserve prior to Wednesday’s road game against
NHL・2 DAYS AGO
93.7 The Fan

Not long after losing the pesky Branden Tanev to Seattle in the expansion draft, the Penguins signed veteran winger Brock McGinn in free agency with the idea that he could, maybe not replace Tanev, but serve as a reasonable facsimile.
NHL・9 DAYS AGO

Tristan Jarry and the Pittsburgh Penguins continued their dominance against Canadian teams on the eve of American Thanksgiving as they pick up a victory against the Vancouver Canucks. With the 4-1 victory
NHL・9 DAYS AGO
Yardbarker

The LA Kings fell 6-2 to the Maple Leafs on Wednesday, but defenseman Sean Durzi scored his first NHL goal. While the LA Kings were blown out on Wednesday against the Toronto Maple Leafs, extending their losing streak to five games, defenseman Sean Durzi recorded both his first NHL point and goal. The 23-year-old assisted on Viktor Arvidsson‘s goal early in the second period, tying the game at one apiece.
NHL・8 DAYS AGO
93.7 The Fan

The New York Islanders’ UBS Arena wasn’t having a Black Friday sale on goals, but the Pittsburgh Penguins managed to collect another victory on Long Island. The Penguins win 1-0 over the Islanders
NHL・6 DAYS AGO
93.7 The Fan

Sometimes you just can’t win them all. The Pittsburgh Penguins saw their five-game win streak come to an end on Saturday night against the Montreal Canadiens
NHL・6 DAYS AGO

Pens goalie Tristan Jarry has been mostly spectacular in the last couple of weeks and most of the season, today honored as the NHL’s 2nd star
NHL・4 DAYS AGO
Sportsnaut

The Columbus Blue Jackets placed goaltender Joonas Korpisalo on injured reserve as he remains sidelined with a non-COVID illness. The
NHL・18 HOURS AGO
Chicago Tribune

Making his weekly appearance on Merloni & Fauria, NESN Bruins play-by-play voice Jack Edwards ranted about Brad Marchand’s suspension for slew-footing and the NHL’s inconsistency in its punishments.
NHL・1 DAY AGO

The Panthers on The Winning Prowl

Florida Panthers had a miraculous comeback last night agianst The Capitals and Randy Moller was there for all the action and insight plus what the future holds.
NHL・2 DAYS AGO
FOX31 Denver

Connor McDavid had a goal and three assists, Zach Hyman scored twice and the Edmonton Oilers defeated the Pittsburgh Penguins 5-2
NHL・2 DAYS AGO
97.1 The Ticket

Raymond, Seider go back to back for Rookie of the Month. Nedeljkovic next?

Raymond leads all rookies with 21 points in 23 games on the season. Seider’s 14 points are tied for second. Hey, these guys are pretty good.
NHL・2 DAYS AGO
Sportsnaut

Auston Matthews scored three goals, John Tavares had a goal and two assists and the Toronto Maple Leafs defeated the
NHL・2 DAYS AGO
105.3 The Fan

Spits and Suds: Why the Dallas Stars are the hottest team in the NHL

Auston Matthews scored three goals, John Tavares had a goal and two assists and the Toronto Maple Leafs defeated the
NHL・2 DAYS AGO
93.7 The Fan

Panthers led by 8 midway through the second half and kept that until an offensive rebounds gave Minnesota the lead with 2.4 seconds left & eventual win
MINNESOTA STATE・3 DAYS AGO