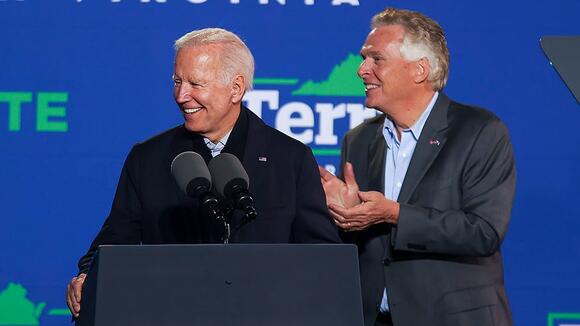 Biden used the speech, which lasted more than 15 minutes, to urge voters to head to the polls, warning that a victory for Republican Glenn Youngkin would be a victory for former President Trump .

“[Youngkin] doesn’t like to talk about it very much now, but to win the Republican nomination, he embraced Donald Trump,” he continued.

A source familiar with the planning of the event said 2,500 people were in attendance.

The former president went on to question why Youngkin and Trump have not appeared together on the campaign trailing, asking, “Is he embarrassed?”

Biden called both of the Republicans extreme but took a particular shot at Youngkin, saying extremism “can come in a smile and a fleece vest.”

Biden also commented on a recent ad from Youngkin that featured a Fairfax County mother who pushed to have the 1987 novel "Beloved" banned from her son's English curriculum in Fairfax County roughly eight years ago.

McAuliffe and his Democratic allies have gone on the offensive on the ad since it was aired on Tuesday. The Democrat’s campaign staff handed out copies of the book to press at the rally.

Biden’s visit comes ahead of one of the most critical weeks in his presidency to date. The president is working to pass a bipartisan infrastructure bill and a massive social spending package through Capitol Hill while preparing to meet with world leaders at the Group of 20 summit in Rome later this week and at next week’s United Nations Climate Conference in Glasgow, Scotland.

Polls between McAuliffe and Youngkin have tightened, which has caused some Democrats to worry. Most polls show the two neck-and-neck, or with McAuliffe leading within the margin of error.

Asked about a shocking new claim that Donald Trump tested positive for Covid-19 before a presidential debate in 2020, Joe Biden had a blunt response.“I don’t think about the former president,” he told a press conference on Wednesday – before calmly turning and walking away.Mr Biden was being asked about a story from an upcoming book by Mark Meadows, Donald Trump’s last presidential chief of staff. In The Chief’s Chief, Mr Meadows recounts that the ex-president – known as “the former guy” in the Biden White House – was departing for a Pennsylvania rally three days before the debate...
PRESIDENTIAL ELECTION・1 DAY AGO
Washington Examiner

Stacey Abrams is a liar

The two-time Democratic Georgia gubernatorial candidate claimed this week she has not challenged the outcome of the 2018 Georgia governor's race. This is a bald-faced lie. She challenged and undermined the election's legitimacy even before state authorities certified Republican Gov. Brian Kemp's victory. "I did not challenge the outcome of...
POLITICS・12 HOURS AGO
Fox News

The now-former spokesman for District of Columbia Democratic Mayor Muriel Bowser told Fox News on Wednesday that President Biden's tenure in office has led him to change party affiliation and also to vote for GOP businessman Glenn Youngkin in the off-year gubernatorial election in Virginia, where he resides. Victor Jimenez...
PRESIDENTIAL ELECTION・2 DAYS AGO
The Independent

An earlier version of this article misidentified Rep. Bennie G. Thompson as Bernie. The article has been corrected. It’s rare when lawyers — as opposed to their clients — take the Fifth Amendment. But Jeffrey Clark, the former Justice Department lawyer who reportedly tried to help Donald Trump overturn the 2020 presidential election, is now claiming the privilege against self-incrimination to avoid testifying before the House committee investigating the Jan. 6 attack on the Capitol. He has just been joined in that posture by one of Trump’s main outside legal advisers, John Eastman.
POTUS・12 HOURS AGO
Business Insider

John Eastman is the second witness who has invoked or plans to invoke the Fifth Amendment in response to a January 6 committee subpoena.
PRESIDENTIAL ELECTION・16 HOURS AGO
US News and World Report

Transportation Secretary Pete Buttigieg, in North Carolina on Thursday for an event promoting the new infrastructure law, had nothing but gushing praise for Vice President Kamala Harris, who in turn lauded the agenda of the man who beat both of them in the 2020 Democratic presidential primary: President Joe Biden.
PRESIDENTIAL ELECTION・23 HOURS AGO
Business Insider

Over four years in the White House, President Donald Trump proved exceptionally adept at using his office to manipulate the legal system. But the Constitution gives no role — or powers — to ex-presidents. The result is that Trump’s run of evading accountability may finally be ending, as most recently shown by an appellate court’s skepticism Tuesday toward his attempt to block the House Jan. 6 Committee investigation.
PRESIDENTIAL ELECTION・2 DAYS AGO
Newsweek

Trump called it "not true" that Melania is enjoying private life and isn't interested in returning to Washington, D.C.,
PRESIDENTIAL ELECTION・1 DAY AGO
dallassun.com

Can Michelle Obama lead the Democrats to victory in 2024

At a time when people are asking how long Joe Biden can survive as president, who's best qualified to take on the Republicans in 2024? With VP Kamala Harris? poll numbers in the basement, Michelle Obama could be one to watch. Earlier this week, Business Insider proclaimed, with all the...
PRESIDENTIAL ELECTION・2 DAYS AGO
MarketWatch

New book by Trump's fourth and final chief of staff says the then-president tested positive for the coronavirus days before he was hospitalized at Walter Reed.
CLEVELAND, OH・2 DAYS AGO

(CNN) — Then-President Donald Trump tested positive for Covid-19 three days ahead of his first 2020 presidential debate with Joe Biden -- though he also had a negative result in that same timeframe, according to excerpts from a forthcoming book from the former Republican president's chief of staff reported by The Guardian.
PRESIDENTIAL ELECTION・2 DAYS AGO
WashingtonExaminer

Republicans seeking their party’s nomination for Senate in Ohio are training their sites on J.D. Vance as the conservative populist makes inroads with GOP primary voters.
U.S. POLITICS・2 DAYS AGO
NBC News

WASHINGTON — President Biden on Wednesday knocked his predecessor Donald Trump in a World AIDS Day speech and claimed House Speaker Nancy Pelosi got “even” President George W. Bush to care about HIV/AIDS. Biden jabbed at Trump despite the former president setting a 2030 goal to end HIV transmission and...
PRESIDENTIAL ELECTION・2 DAYS AGO

The Missouri auctioneer bidding it all for Trump's backing

Rep. Billy Long's been ride-or-die for the ex-president who can put him over the top in the Senate GOP primary. But he's got colorful competition.
MISSOURI STATE・5 DAYS AGO
Newsweek

As I read the frequent articles in our Daily Local News concerning the 2021 election and the challenge to get the results certified, I am dismayed by the lack of trust in our election process that now exists here in Chester County, and all across the country. After the unprecedented attacks and misinformation spread before, during and after the 2020 election, there are a significant number of people who won’t accept the results, as evidenced by the vocal critics of the Chester County Commissioners who voted 2 to 1 to certify the results of the 2021 election.
CHESTER COUNTY, PA・9 DAYS AGO
Greater Milwaukee Today

Biden will run for re-election

WASHINGTON — White House Press Secretary Jen Psaki confirmed that President Joe Biden will run for re-election in 2024, but critics have been quick to point out economic difficulties during his presidency. Psaki addressed reporters’ questions about previous reporting that Biden would run for the White House again in 2024,...
PRESIDENTIAL ELECTION・9 DAYS AGO