While walking his daughter down the aisle, dad pulls her stepdad from the crowd to join them 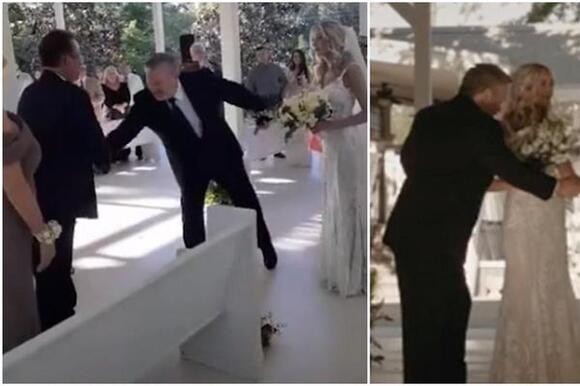 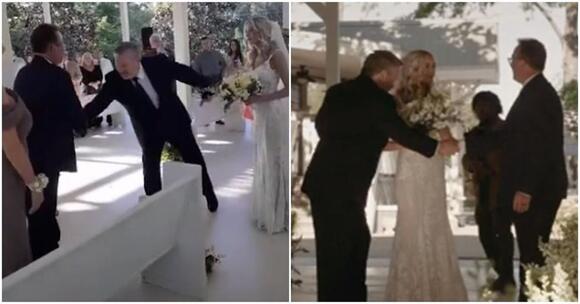 A touching video is going viral on TikTok because it shows an amazing act of gratitude and selflessness. Photographer Kelsey Griffith posted a video from her wedding that has a twist. As her and her father approach the altar, her dad holds out his hand and invites her stepfather to join them the rest of the way.

Kelsey captioned her video: "My dad surprised my stepdad by including him in our walk down the aisle."

It's pretty clear from the video the stepfather didn't know about the surprise. It appears as though he thinks the father is extending his arm for a handshake before he pulls him towards the aisle.

Here's a video of the moment taken from behind.

Here's what it looked like from the altar. If you listen carefully you can hear someone mutter, "That's very sweet," in the background.

Reply to @meaganbylski a different perspective from our amazing videographer @maxbernardweddingvideos

"This is what happens when a parent loves his child with complete unselfishness," one person wrote in the comments, and it's true. Fathers wait their entire lives for the moment they get to walk their daughters down the aisle. To share that moment with another man shows that he put his daughter above everything.

It can't be easy to watch your child being raised by another man, but instead of being selfish, he showed how grateful he was to have him in their lives.

Another commenter thought it was a great example for all divorced parents to follow. "If this doesn't serve as a lesson to all divorced and or additional parents, I don't know what does," they wrote. "Congrats to all of you. More parents could learn!"

The story is reminiscent of one that Upworthy covered six years ago. In 2015, father-of-the-bride Todd Bachmann was walking his daughter down the aisle when he grabbed his daughter's stepdad, Todd Cendrosky, and the three walked down the aisle together.

The moment was powerful for Cendrosky who immediately broke into tears.

"[Brittany's biological father] came and grabbed my hand, and said: 'You worked as hard as I have. You'll help us walk our daughter down the aisle,'" Cendrosky said according to USA Today. "I got weak in the knees and lost it. Nothing better in my life, the most impactful moment in my life."

Bachmann posted a beautiful photo of him taking Cendrosky by the hand and it went viral on Facebook with over 12 million views. 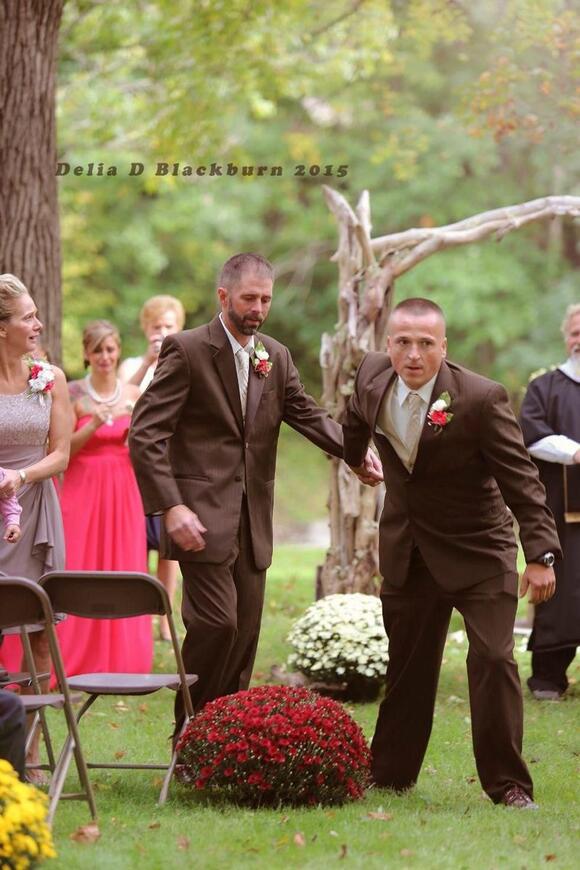 "It hasn't always been peaches and cream, by any stretch of the imagination," Bachmann later said. "There's no better way to thank somebody than to assist me walking my — walking OUR daughter — down the aisle."

This is the most beautiful thing , such class, style and definitely two gentlemen walking their daughter down the aisle. This is so beautiful !!

My beautiful wife and Myself, moved in with my ex to take care of her after she broke her leg. Tons of people thought we were crazy, but we knew that we would be just fine. We (the 3 of us) are now seeking permanent joint custody of our grandchild from our murdered son. So even though our kids are grown-up, we still all continue to co-parent together, always.

That was the case for 21-year-old Kallayah Jones, and her optimism paid off exponentially. Jones had been unemployed for months, not to mention homeless for two years, jumping from friend's houses to her grandparents' home. Add onto that: having to search for jobs during the COVID-19 pandemic, which I don't need to tell you is no easy feat. So when she had her interview for a serving position at The Spot Sports Bar and Grill in Georgia, it's understandable that Jones felt intense anxiety.
THEATER & DANCE・20 DAYS AGO
Whiskey Riff

I gotta say, being a parent can be a rewarding, and brutally difficult, job sometimes. And when I say brutally difficult, a part of it is includes their kid buying absolutely ridiculous things for no apparent reason. I remember my friend’s older brother went online one time when he was eight-years-old, and had the bright idea to buy 1,000 orange golf tees using his dad’s credit card, simply because his favorite color was orange. I can’t remember what the exact […] The post Dad Loses His Mind After Daughter Tells Him She Paid $150 For Premium Air In Her Tires first appeared on Whiskey Riff.
RELATIONSHIPS・6 DAYS AGO
Upworthy

A FaceTime from her daughter is the best surprise this mom could ask for. Why? Because unbeknown to her, the daughter arrived back home from college in secret. And she shared this touching impromptu reunion with TikTok for everyone to enjoy.
FAMILY RELATIONSHIPS・13 DAYS AGO
Upworthy

Husband brilliantly sneaks his dog into the hospital to say goodbye to his wife.

Anyone who owns a dog can attest to the amazing comfort they provide during times of stress or discomfort. Research shows that dogs have a biological effect on us that elevates our levels of oxytocin, which is known as the “love hormone."
PETS・5 DAYS AGO

Mom of trans 5-year-old shares her unexpected parenthood story: 'Exactly who he was meant to be'

A young mom is sharing her experience of raising a trans five-year-old in the hopes of spreading awareness among other parents who might be scared to let their children be their truest selves. Speaking to Asbury Park Press, Emily Torrisi of Howell, New Jersey, explained that the kindergartener was assigned female at birth but identifies as male—something she and her husband, Alfio Torrisi, realized was completely natural after watching him develop over the last few years. While he loved playing with toy trucks as a one-year-old, by age two, EJ "started picking out boys' clothes." By the time he'd turned four years old, the youngster was telling sisters Saige and Cecelia, "I'm your brother."
HOWELL, NJ・5 DAYS AGO
Upworthy

A 23-year-old from southeast Michigan went viral on social media last year after sharing how his crafty mom made the most of her investment in the braces he had as a teen. Austin, who goes by @austin9943 on TikTok, left netizens quite impressed with his mom's resourcefulness and creativity. He revealed that she'd turned the old metal brackets into Christmas ornaments in memory of him finally removing it and—most importantly—the $6000 she spent on them. In a video that has been viewed over 1.9 million times since the time it was posted, Austin shared the embarrassing story behind the now-family heirloom.
BEHIND VIRAL VIDEOS・5 DAYS AGO
Upworthy

A sweet, beautiful little girl sees her reflection as she gets her hair done by her loving mom. And then she utters three little words that would break any mother’s heart:. Her mom gasps, instincts kicking in. “Don’t say that!” But by then the daughter has already broken into tears. It’s hard to watch this innocent child’s self-esteem so devastated.
RELATIONSHIPS・2 DAYS AGO
Upworthy

This son sent his mom a life-size cutout of himself. She got the last laugh.

A dad has been described as “iconic” for his shenanigans after rocking up to a nightclub with his daughter. TikToker Taila (@taliasc) was in Madrid, Spain on a family holiday when she decided she wanted to check out the city’s nightlife, and her dad was just as keen to paint the town red and get on his dancing shoes.
BEHIND VIRAL VIDEOS・3 DAYS AGO
Upworthy

She got all four of her grandparents to draw a flower. Then surprised them with a tattoo.

Emily McNeill, a content creator in Ireland, had a brilliant idea for keeping the memory of her four cherished grandparents with her forever: with a tattoo. Not just any tattoo, either. This one would be designed by the grandparents themselves. All four of them. They just wouldn’t know it.
LIFESTYLE・5 DAYS AGO
Sand Hills Express

Chelsie Hill has used a wheelchair since she was a teenager, but dreamed of walking down the aisle one day at her wedding. So, she found a way to make it happen. Hill, a passenger in a drunk driving accident as a high school senior, is paralyzed from the waist down. And she’s forged ahead — she founded an all-women wheelchair dance team, The Rollettes, which runs a women’s empowerment weekend in Los Angeles for women and children with disabilities.
RELATIONSHIPS・3 DAYS AGO
Upworthy

In 2016, Wanda Dench texted her 24-year-old grandson to tell him that Thanksgiving dinner would be at her house at 3:00 p.m. She received a text back that said, "Who is this?" Dench responded, "Your grandma," but the recipient of the text was not, in fact, Dench's grandson. It was a 17-year-old high schooler named Jamal Hinton. After the two exchanged selfies and established that Dench had the wrong number, Hinton joked, "Can I still get a plate tho?"
ACCIDENTS・19 DAYS AGO
Upworthy

My Husband Went on a Date With His Ex-Girlfriend

On this week’s second episode, exclusively for Slate Plus members, Stoya and Rich discuss a letter from a woman whose experiment with “ethical non-monogamy” isn’t going the way she expected. Read the How to Do It column on Slate here. If you’re in need of sex advice from Stoya and...
RELATIONSHIP ADVICE・4 HOURS AGO
Upworthy

One dad who decided to go clubbing with his daughter is making our day while having the night out of his life. Talia Schulhof (aka @taliasc) had to know she had all the makings of a viral-worthy TikTok when she posted:
BEHIND VIRAL VIDEOS・21 HOURS AGO
Amy Christie

Bride’s dad invites stepfather to join walk down the aisle: “Honored to be included”

A father had an original idea to make his daughter’s wedding day special. He invited her stepfather to join them as they were walking down the aisle. Both men had played an essential part in her life, so this made everyone smile as love connected all taking part in the celebration.
21 HOURS AGO
Upworthy

Cardi B is calling out people who still get riled up over ridiculous notions about traditional gender roles. On Thursday, the 29-year-old rapper put an end to an online debate about what kind of toys are appropriate for boys when she clapped back at folks who took issue with a young boy playing with a kitchen set. The issue came to Cardi's attention when Twitter user @SheerOpulence2 posted a picture of the child playing with a toy pot, writing: "People on Facebook are having a full-blown gender war about this photo."
RELATIONSHIPS・2 HOURS AGO
Upworthy

Cherie Garcia managed to score some major mom points from her response to her child's creative—yet slightly flawed—coming out letter. Using colorful cut-out letters, Garcia's son Crow made a short letter coming out as transgender, which looked something like a ransom note. The message was meant to be: Congratulations! You are now the proud owner of your very own son.
SOCIETY・18 DAYS AGO
InspireMore

It was a scene that strikes fear into the heart of every driver: A man was driving down a street in Brazil when a 10-year-old girl dashed in front of his car while chasing a ball. He slammed on the brakes but couldn’t avoid an impact. Thankfully, the child, Haghatta, was not gravely injured, but she was rushed to the hospital nevertheless. The driver watched helplessly as her small body was loaded into the ambulance, and he broke down in tears of anguish and worry. That’s when he received comfort from a very unlikely source!
ACCIDENTS・10 DAYS AGO
Upworthy

Her son came out. She called a gay bar for advice. The delightful convo went viral.