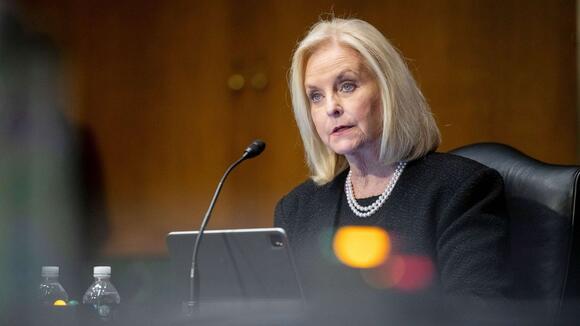 Three of President Joe Biden’s major nominees were confirmed to ambassadorships by the Senate on Tuesday.

MORE: Sen. Jeff Flake bids farewell to Congress, warns the country is not 'immune' to authoritarianism

Cindy McCain, the wife of late GOP Sen. John McCain, was confirmed to the rank of ambassador during her tenure of service as U.S. Representative to the United Nations Agencies for Food and Agriculture.

All three nominees were confirmed unanimously.

Arizona Sen. Mark Kelly, a Democrat, asked for unanimous consent to confirm Cindy McCain. Kelly was mentored by John McCain prior to his death in 2018 and won his Senate seat last year. Democratic Sen. Kyrsten Sinema, also of Arizona, was presiding over the Senate when the nomination was confirmed and was visibly excited.

Flake and McCain were some of Biden’s most ardent Republican supporters during the 2020 presidential election. They were censured by the Arizona Republican Party in January for their staunch criticism of former President Donald Trump.

"I truly hope that as things progress on, and we get further away from this mess that occurred, that we can do just that," she added. "We can get back on track and remind everyone that we are here for the country and not our party."

GOOD ! THESE are good respectful Republicans. Thank YOU President Biden for recognizing that fact. Welcome aboard Cindy McCain and Jeff Flake. It gives ME hope that there are some good Republicans on the Democratic team. And I am an Independent Registered Voter.

Correct. The country always comes first. Unfortunately, the GOP is not the bad guy here. Take a good look at the past year, then say this again. Talk is cheap.

In order for the CPA..COMMUNIST PARTY OF AMERICA..i.e...the Republican GOP, to do that which they have never done becore.. is to clean house...they have too many old career senators that are lifers and have gone ROAD..they are doing nothing but creating havoc in this country and collecting a welfare check they truly do not deserve.

WASHINGTON, Nov 30 (Reuters) - A new fault line opened between Republicans in the U.S. House of Representatives on Tuesday, as lawmakers squabbled publicly over accusations of religious bigotry and racism among party conservatives. In a fight that could further complicate Republican efforts to forge unity ahead of next year's...
CONGRESS & COURTS・2 DAYS AGO
Fox News

EXCLUSIVE: Ohio Senate candidate Bernie Moreno is spending more than $4 million to go up starting Thursday with a six-week-long ad blitz in the crowded and competitive Republican nomination battle in the 2022 race to succeed retiring GOP Sen. Rob Portman. In the spot, which was shared first with Fox...
OHIO STATE・1 DAY AGO
Star-Herald

The reason for censuring U.S. Senator Debra Fischer was simple, said Tony Storbeck, co-chair of the Dawes County GOP. “Our opinion was that our representatives need to know they represent us, not themselves,” he said. Censuring is an informal and largely symbolic action used to express displeasure with the political...
SCOTTS BLUFF COUNTY, NE・2 DAYS AGO
NBC News

The Senate GOP primary in Pennsylvania might get even more crowded. Former Rep. Keith Rothfus, R-Pa., told NBC News on Tuesday that he's considering launching a Senate bid, a move that would further expand the Republican field for a seat that's crucial to both parties in their fight to win control of the chamber in next year's midterm elections.
PENNSYLVANIA STATE・2 DAYS AGO

Behind the scenes, some Republicans worry that if Trump runs, he may potentially harm moderate Republican candidates.
PRESIDENTIAL ELECTION・12 DAYS AGO
restorationnewsmedia.com

Senate confirms Easley as US attorney

The Eastern District of North Carolina has a new chief federal prosecutor after the U.S. Senate unanimously confirmed Michael Easley Jr. to the post on Friday. Senators approved all three of President Joe Biden’s nominees for U.S. attorneys in North Carolina — Easley in the state’s Eastern District, Sandra Hairston in the Middle District and Dena King in the Western District.
CONGRESS & COURTS・12 DAYS AGO
POLITICO

Josh Hawley is releasing his hold on a top foreign policy nomination: the NATO ambassador. The Senate confirmed her later Thursday.

Hawley said the pick, Julianne Smith, committed to pushing for more defense spending. Here's what's happening: Republican Sen. Josh Hawley has dropped his blockade of Julianne Smith, President Joe Biden’s pick to represent the U.S. at NATO. It comes after he sought assurances that she would press European allies to boost their goal of spending two percent of their gross domestic product on their defense by 2024.
CONGRESS & COURTS・14 DAYS AGO

Republican senators are expressing shock and disbelief that conservative allies of former President Donald Trump in the House threatened to strip colleagues who voted for the $1 trillion infrastructure bill of their committee assignments.
CONGRESS & COURTS・14 DAYS AGO
Navy Times

WASHINGTON ― The Senate confirmed President Joe Biden’s pick for ambassador to NATO, Julianne Smith, by a voice vote Thursday after Sen. Josh Hawley removed his objection to the nomination. Hawley, R-Mo., said he had lifted his procedural hold on Smith after she sent him a letter agreeing to seek...
CONGRESS & COURTS・14 DAYS AGO
Reuters

WASHINGTON (Reuters) -U.S. Senator Lisa Murkowski of Alaska, a three-term Republican who voted to convict President Donald Trump in his second impeachment trial, announced her bid for re-election on Friday with a nod to bipartisanship. “I will work with anyone from either party to advance Alaska’s priorities and I will...
CONGRESS & COURTS・20 DAYS AGO
WashingtonExaminer

Former Vice President Mike Pence shrugged off the anger of Trump supporters who are upset he did not attempt to challenge the results of the 2020 election while presiding over Congress in January as lawmakers tallied the electoral votes in President Joe Biden's victory despite pressure by his boss at the time.
PRESIDENTIAL ELECTION・1 DAY AGO

As Christine Pelosi's potential political future again hit the news, the daughter of House Speaker Nancy Pelosi devoted some of the last week to dwelling on 2016, the year she stepped into the national spotlight in her own right. . Days after Politico reported buzz is building that the younger Pelosi...
PRESIDENTIAL ELECTION・2 DAYS AGO
Florida Phoenix

Quality Journalism for Critical Times WASHINGTON—U.S. House Majority Leader Steny Hoyer said Tuesday that Democrats are weighing what to do about Republican Rep. Lauren Boebert of Colorado in connection with anti-Muslim comments she made about a colleague in the House. “We’re considering what action ought to be taken,” said Hoyer, a Maryland Democrat, at a briefing with reporters. Hoyer would […] The post U.S. House Dems mull how to address Rep. Lauren Boebert’s anti-Muslim remarks appeared first on Florida Phoenix.
CONGRESS & COURTS・2 DAYS AGO
MSNBC

Kevin McCarthy delivers an incomplete message to his GOP members

It hasn't been a great week for Republican unity on Capitol Hill. Most notably, two first-year GOP House members — Georgia's Marjorie Taylor Greene and South Carolina's Nancy Mace — have feuded in ways that turned quite ugly in recent days. The conflict started in earnest when Republican Rep. Lauren...
CONGRESS & COURTS・15 HOURS AGO
WashingtonExaminer

A growing chorus of conservatives is demanding that Senate Republicans shut down the government if President Joe Biden refuses to scrap the federal coronavirus vaccine mandate.
CONGRESS & COURTS・2 DAYS AGO

Idaho Sen. Jim Risch, the top Republican on the Senate Foreign Relations Committee, on Saturday criticized a blockade by some in his party of President Biden's top diplomatic picks, Politico reports. Driving the news: Biden has more than 50 foreign policy nominations stalling in the Senate, per Politico. Republican Sens....
PRESIDENTIAL ELECTION・11 DAYS AGO
Fox News

The now-former spokesman for District of Columbia Democratic Mayor Muriel Bowser told Fox News on Wednesday that President Biden's tenure in office has led him to change party affiliation and also to vote for GOP businessman Glenn Youngkin in the off-year gubernatorial election in Virginia, where he resides. Victor Jimenez...
PRESIDENTIAL ELECTION・1 DAY AGO
Markets Insider

Democrats want to raise the debt ceiling, avoid a government shutdown, and pass Biden's agenda all before Christmas. The GOP has other plans.
CONGRESS & COURTS・2 DAYS AGO
WAVY News 10

The House on Thursday voted to pass a short-term spending bill to fund the government through mid-February, as lawmakers work quickly to avert a shutdown on Friday.
CONGRESS & COURTS・5 HOURS AGO