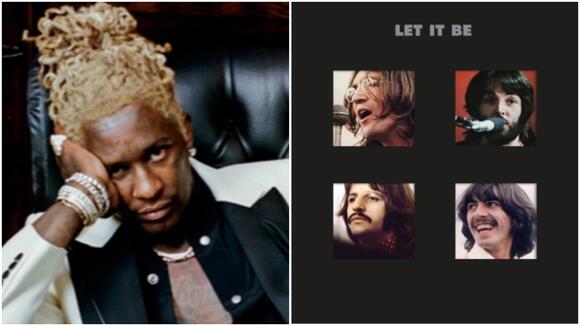 It was an eclectic mix of material invading the top 5 on the album chart this week, as Young Thug and Mac Miller entered at Nos. 1-2, but then a new Coldplay album and a new version of a very old Beatles album popped in at Nos. 3-4.

Meanwhile, on the song chart, Adele releasing her first new music in six years, “Easy on Me,” made for an easy No. 1 bow.

Young Thug’s “Punk” premiered at No. 1 on the Rolling Stone album chart with 88,900 album-equivalent units, somewhere in the mid-range of where albums have been debuting lately. It scored a decent 10,100 units in full-album sales but, of course, found most of its success in streaming, with 96.9 million streams registered.

Drake’s “Certified Lover Boy” fell to No. 3 in its seventh week, with a still-strong 82,600 album-equivalent units.

In fourth place was the debut of Coldplay’s “Music of the Spheres,” with 57,900 units. Album sales stood at 31,500, individual song sales added up to 33,100 and individual streams amounted to 18.7 million. These are higher numbers than what Coldplay managed when their previous album, “Everyday Life,” came out in 2017, and there may be a good reason for that: the added interest of BTS fans, due to the inclusion of the two group’s collaborative single, “My Universe,” on the album.

Fifth place went to an album that is new to the Rolling Stone chart but not necessarily new to you: the Beatles’ “Let It Be.” Different versions of the album, from a basic single-disc remix to an elaborate five-CD set, are counted together in the 43,000 album-equivalent unit total. Most of the tally can be attributed to 21,600 full-album sales, although streaming amounted to 9.2 million listens.

On the Rolling Stone songs chart, Adele’s “Easy on Me,” which broke multiple streaming and radio records in its first week, premiered on top with 454,000 song units and 44.7 million song streams.

Taylor Swift Has Twin No. 1 Chart Debuts With ‘All Too Well’ Single, ‘Red (Taylor’s Version)’ Album

Taylor Swift has topped both the Billboard 200 album chart and the Hot 100 singles chart with “Red (Taylor’s Version)” and “All Too Well,” respectively. The “Red” remake has the distinction of topping the albums tally with the second-biggest figure of the year so far, trailing only the first week for Drake’s “Certified Love Boy,” and coming within spitting distance at that. Swift’s album debuts with a better-than-anticipated 605,000 equivalent album units; Drake’s album bowed in September with 613,000. The 605K figure for “Red (Taylor’s Version)” is surprising because it more than doubles the number that “Fearless (Taylor’s Version)” debuted with in...
CELEBRITIES・6 DAYS AGO
Variety

Adele’s “30” enjoyed the biggest opening numbers of any blockbuster album in 2021, as expected, with 839,000 album-equivalent units, according to an announcement by Billboard Sunday night. Adele’s big premiere beats the previous mark set by Drake’s “Certifiable Lover Boy” when it bowed with 613,000 back in September. It also comes in ahead of Taylor Swift’s “Red (Taylor’s Version),” which just a week ago had the second-biggest debut of the year, with 905,000 album units, and now is bumped to the third most sizable of 2021. The biggest part of Adele’s tally came in full-album sales, as was true of Swift’s massive...
ENTERTAINMENT・8 HOURS AGO
Variety

Four-time Grammy winning singer-songwriter-producer Missy Elliott was honored Monday with a star on the Hollywood Walk of Fame. Ciara and Lizzo (pictured below, filming Elliott’s acceptance speech on their phones) were among those to introduce Elliott at the Hollywood Chamber of Commerce ceremony — fittingly, Elliott’s star was placed outside the new location of the giant Amoeba Music record store on Hollywood Boulevard, which will also be a location for stars for other music honorees, Ana Martinez, said. Elliott — who gave a career-spanning interview to Variety to mark the occasion — teared up as she thanked all the people who helped along...
CELEBRITIES・19 DAYS AGO
buzzfeednews.com

The Grammys have denied that Taylor Swift and Kanye West were nominated at the last-minute because of their feud and "appeal" after it was reported that they were added to the list of potential winners the day before they were announced. Earlier this week, the Grammys unveiled the list of...
MUSIC・2 DAYS AGO

The late Malcolm James McCormick (1992-2018) — best known as the rapper Mac Miller — touched millions in his Pittsburgh hometown and beyond. For Philadelphia-based hip-hop writer Donna-Claire Chesman, who wrote “The Book of Mac: Remembering Mac Miller,” his music was a flicker of light shining in an encroaching darkness, and the inspiration to accept herself as a queer Jewish woman struggling with anxiety and depression.
PITTSBURGH, PA・5 DAYS AGO
Billboard

Pop superstar Adele adds another genre to her Billboard chart résumé, as “Easy on Me,” with Chris Stapleton, enters the Country Airplay ranking (dated Nov. 27). The song starts at No. 25 with 5.4 million audience impressions, according to MRC Data. With the debut, Adele logs her first appearance on...
MUSIC・4 DAYS AGO
The Independent

Adele has finally released her new album 30 , and fans are celebrating with a bottle of wine and a good cry. The album comes six years after the 33-year-old singer’s last album 25. Critics are calling the record a “gripping act of big budget vulnerability.” In her four-star review for The Independent , critic Annabel Nugent wrote: “Lyrically, 30 is candid. Adele has always been forthright – every bad feeling you’ve felt, she has confessed to feeling too – but there is a new immediacy here.” “Earlier songs spoke in platitudes and broad strokes. They projected human emotions...
CELEBRITIES・10 DAYS AGO
The Ringer

Charles Holmes and Grace Spelman give their reviews of the most anticipated album of 2021, Adele’s 30 (0:00). They break down what worked, what didn’t, and whether the album deserves the immediate praise and accolades that it’s receiving. Then, Charles and producer Justin Sayles remember the South Memphis rapper Young Dolph after his tragic passing (36:00).
MUSIC・9 DAYS AGO

Reviewers across the media have shared their verdicts for 30, the latest album by Adele – and it’s good news for the “Hello” singer-songwriter.The album, which is Adele’s first in six years, has been heralded as the singer’s best work by several outlets, with many praising the songwriting craft and musicianship.In a four-star review from The Independent, Annabel Nugent wrote: “Lyrically, 30 is candid. Adele has always been forthright – every bad feeling you’ve felt, she has confessed to feeling too – but there is a new immediacy here. “Earlier songs spoke in platitudes and broad strokes. They projected...
MUSIC・12 DAYS AGO
Rolling Stone

Summer Walker's 'Still Over It' tops the U.S. album chart

Nov. 20 (UPI) -- Singer-songwriter Summer Walker's Still Over It is the No. 1 album in the United States this weekend. Coming in at No. 2 on the Billboard 200 chart dated Saturday is ABBA's Voyage, followed by Drake's Certified Lover Boy at No. 3, Ed Sheeran's = at No. 4 and Morgan Wallen's Dangerous: The Double Album at No. 5.
ENTERTAINMENT・8 DAYS AGO
energy941.com

Is Adele's New Album '30' Any Good? The First Reviews Are In

Adele's latest album "30" was always going to be scrutinized to nth degree, given critics loved her earlier work, but now the first reviews are in.
MUSIC・11 DAYS AGO
Billboard

Adele on Track For Rare Trifecta on U.K. Singles Chart

Adele is setting fire to the U.K singles chart. Based on sales and streaming data from the first 48 hours in the chart cycle, Adele is in a three-way battle with herself for the title. “Easy On Me,” the leader for the past five weeks, remains on top of the...
MUSIC・6 DAYS AGO
The New Yorker

When Adele set out to finish her new album, “30,” her record label wondered how to make it resonate with a younger crowd. Adele is a vocal powerhouse with an out-of-time sensibility, and she takes long hiatuses between albums. It has been six years since her previous record, “25,” and much has changed in the world of popular music, whose pace Adele has long been proudly out of synch with. “The conversation of TikTok came up a lot,” the singer told the radio personality Zane Lowe, in a recent interview. “They were, like, ‘We’ve really gotta make sure that these fourteen-year-olds know who you are.’ ” Adele is one of the few figures in entertainment with the authority and the gravitas to brush off such misguided suggestions, and her solution was defiantly simple. “They’ve all got moms, and they’ve definitely been listening to my music, these fourteen-year-olds,” she told the label.
TROUBLE RELATIONSHIP・5 DAYS AGO
Billboard

TWICE collects its second top 10 album on Billboard’s Top Album Sales chart, and largest sales week yet, as Formula of Love: O+T=<3 debuts at No. 2 on the Nov. 27-dated chart. It sold 58,000 copies in the U.S. in the week ending Nov. 18, marking the biggest sales frame for the South Korean girl group yet, surpassing the 43,000-sales launch of Taste of Love in June (No. 1 debut).
ENTERTAINMENT・4 DAYS AGO
officialcharts.com

As Adele celebrates landing the Official Irish Chart Double this week, Easy On Me reclaims the Number 1 spot for a fifth total week at the summit. Two more songs from 30 also land in the Top 5 – Oh My God at Number 3, and I Drink Wine at Number 5.
THEATER & DANCE・3 DAYS AGO
UPI News

Nov. 27 (UPI) -- Pop star Taylor Swift's Red (Taylor's Version) is the No. 1 album in the United States this week. Coming in at No. 2 on the Billboard 200 chart dated Saturday is Bruno Mars & Anderson .Paak's An Evening with Silk Sonic, followed by Twice's Formula of Love: O+T =<3 at No. 3, Summer Walker's Still Over It at No. 4 and Drake's Certified Lover Boy at No. 5.
ENTERTAINMENT・1 DAY AGO
nnhsnorthstar.com

A review and analysis of Adele’s comeback album, “30”

I have spent a long time searching for my no-skip album. A no-skip album, according to Urban Dictionary, is “an album… that has no bad songs, therefore you don’t need to skip any when listening to it.” To me, “30” by Adele fits the definition. Every single song on Adele’s comeback album has songwriting craft and technique that creates a cohesive, beautiful experience. After six years without releasing music, Adele proved she still has what it takes to take over the music industry.
MUSIC・1 DAY AGO
officialcharts.com

Adele is currently in a three-way battle with herself for Number 1 on the Official Singles Chart. Following the blockbuster release of her fourth album 30 on Friday, a trio of tracks from the record are currently taking up all three top spots of the chart. As it stands, current...
MUSIC・8 DAYS AGO