Minnesota’s soccer community is excited for what will be a big moment.

Amanda Pieper will be going to the game with her daughter and friends.

“I am a little bit fan-girling right now,” Pieper said. “I’m super excited, and I’m so happy that they’re in Minnesota for this game.”

Andrea Yoch, the co-founder of the new women’s soccer team that’s starting in Minnesota early next year, is one of many dedicated soccer fans in Minnesota. 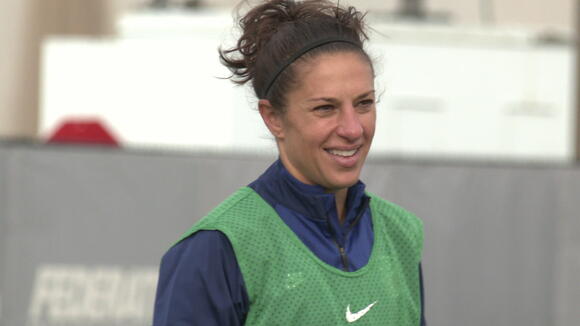 “It’s gonna be awesome. The stadium’s gonna be packed. We’re loud, we’re excited, it’s gonna be great” Yoch said. “I flew back from Nashville at 6 a.m. this morning. Cut a trip short in order to be here tonight, so as soon as that date came out, I was like, ‘Yep, I’m coming home.'”

She’s one of many fans anxiously anticipating Tuesday night’s match.

“It’s been on the whiteboard in our hallway for months. And the friends that we’re going with, we’re all, it’s kind of our childhood dream to see them play,” Pieper said. “With everybody in the crowd tonight, I know it’s going to be awesome and I hope she feels all the love from Minnesota.”

Minnesotans get to witness Lloyd’s final match — a moment fans worldwide will be watching.

“Like for me, really special was when they were here last time they had just won the World Cup and Carli Lloyd was the one that came out onto the field and lifted the trophy above her head and the crowd went nuts,” Yoch said. “So that fact that she’s coming back tonight to say goodbye, and that she has represented everything that’s great about sports and that we get to honor that, means a ton.”

GARDEN GROVE (CBSLA) – New reports indicate that a teenager involved in a violent incident during a girl’s basketball tournament last week has committed a similar offense on at least one other occasion. The girl, who cannot be named as she is a minor, can be seen charging and hitting...
LOS ANGELES, CA・17 DAYS AGO
247Sports

Alabama quarterback and likely Heisman frontrunner Bryce Young had several moments to remember during Saturday's 24-22 win at Auburn, leading a game-tying 97-yard touchdown drive in the closing minutes before delivering a handful of on-target strikes in overtime to help the Crimson Tide to victory. Alabama trailed by 10 points...
ALABAMA STATE・15 HOURS AGO
CBS Minnesota

MINNEAPOLIS (WCCO) — As we approach the holiday season of giving, Minnesota’s largest city has been ranked the most generous city in the country. A recent study from LawnStarter compared 130 of the biggest cities in the United States, with key indicators including philanthropic behavior, share of donors, number of homeless shelters, and “even the number of locals who converted their Little Free Library into a food sharing box for hungry neighbors.” Minneapolis topped the list, just ahead of Seattle, Washington and Portland, Oregon. St. Paul also fared well on the list, ranked No.7. Minneapolis stood out when looking at individual generosity rank (No. 1) and was among the top 25 cities when looking at community generosity (No. 22). Additionally, Minneapolis and St. Paul were tied for the largest share of residents who volunteer. Minneapolis also has the third-most amount of Free Little Library sharing boxes, according to the study. Read more about the study, and its methodology, here.   More On WCCO.com: Group Of 20-30 Robbers Swarm Burnsville Best Buy On Black Friday 6-Year-Old Boy Run Over By Trailer At Tree Farm, Suffers Injuries Historic Wabasha Street Caves In St. Paul Begins New Chapter Remains Of Missing Woman Found Near Hinckley
MINNEAPOLIS, MN・5 DAYS AGO
CBS Minnesota

Vikings: Everson Griffen Came Out Of His Home And Is Getting The Care He Needs

MINNETRISTA, Minn. (WCCO) — The Minnesota Vikings said Wednesday afternoon that law enforcement officials notified them that Everson Griffen came out of his Minnetrista home without incident and is getting the care he needs. In a statement, the team said that it’s thankful for the local law enforcement for ensuring that the situation ended peacefully. Minnetrista police said that the defensive end left his home around 1:30 p.m. and that an ambulance brought him to a health care facility where he is getting help. “Our focus remains on Everson’s health and safety and providing the proper resources for him...
NFL・4 DAYS AGO

The U.S. women’s national team used an early goal by Ashley Hatch to defeat Australia 3-0 in Sydney, Australia, on
SOCCER・2 DAYS AGO
Yardbarker

All good things must come to an end. In the latest episode of Whistle's LEGO Super Mario real-world challenge, Boban and Katelyn Ohashi face off against Carli Lloyd and Jordan Burroughs for their third and final match. The stage is set for a trilogy finale!. In the first course, "Team...
COMBAT SPORTS・10 DAYS AGO
CBS Minnesota

ROGERS, Minn. (WCCO) — A nonprofit is raising mental health awareness for youth athletes here in Minnesota, inspired by a young hockey player gone too soon. Friday was opening night of the high school hockey season. But it was about so much more than hockey. “We’ve been working with many organizations and trying to put this all together to raise awareness for something that’s very important to all of us,” said Olivia Wlasching, a Centennial High School hockey player and member of Sophie’s Squad. The organization Sophie’s Squad took over the Roger’s ice rink for mental health awareness, in honor of it’s namesake,...
MINNESOTA STATE・2 DAYS AGO
Mitchellrepublic.com

If this was Aaron Rodgers' final game in Minnesota, Vikings fans (and Packers fans) have seen plenty

MINNEAPOLIS -- There were still plenty of green jerseys with number 12 on them headed into U.S. Bank Stadium on a sunny, chilly, windy Sunday morning. The horde of transplants from the east who have taken up residence in Minnesota, like an invading army, is still fiercely loyal to all things Green Bay Packers.
NFL・7 DAYS AGO

Originally published Nov. 22, 2021 MINNEAPOLIS (WCCO) — Some passionate Minnesota Vikings fans were pleasantly surprised while traveling home following the team’s victory over the Green Bay Packers. On Sunday afternoon, Cousins posted a video on Instagram, captioned “saw this sweet ride on the way home from the game and had to say hello.” RELATED: Greg Joseph Hits Last-Second Field Goal To Give Vikings 34-31 Win Over Packers The video shows Cousins driving up to a bus with “Vikings Nation” written on it, honking and giving those in the bus a thumbs up. The bus honks back. Watch below: View this post on Instagram A post shared by Kirk Cousins (@kirkcousins) Vikings’ kicker Greg Joseph made a 29-yard field goal to beat the Packers as time expired on Sunday, sealing the team’s 34-31 win over the Packers. Cousins passed for 341 yards and notched three touchdowns.   More On WCCO.com: Group Of 20-30 Robbers Swarm Burnsville Best Buy On Black Friday Family Of 5 Without Home After House Burns Down On Thanksgiving Historic Wabasha Street Caves In St. Paul Begins New Chapter 'A Very Unfortunate Accident': 5-Year-Old Boy Killed In Brooklyn Park Shooting Thanksgiving Evening
NFL・6 DAYS AGO
The Spun

The Minnesota Vikings star quarterback had one of the most-embarrassing moments of the season on Sunday afternoon. Minnesota, trailing San Francisco late on Sunday, had to call a timeout when Cousins lined up under the wrong offensive lineman on a fourth down play. Seriously. Welp. It’s been a pretty tough...
NFL・17 HOURS AGO
CBS Minnesota

ST. PAUL (WCCO) — A critical World Cup qualifier will be hosted by Allianz Field in St. Paul during one of Minnesota’s coldest months. On Wednesday, Minnesota United and U.S. Soccer announced that the venue will host the U.S. men’s national soccer team’s game against Honduras on Feb. 2. It’ll cap a three-game stretch of frigid games for the USMNT. On Jan. 27 USMNT will face El Salvador in Lower.com Field in Columbus, Ohio and will then play in an away match against Canada. Then, the team heads to St. Paul’s open air soccer stadium. “World. Cup. Qualifier,” Minnesota...
MLS・5 DAYS AGO
CBS Minnesota

‘It’s Time To Roll’: RB Mo Ibrahim Will Return To Gophers For 2022 Season

MINNEAPOLIS (WCCO) — Gophers running back Mo Ibrahim, who is out for the season after an injury in the first game, has announced he’ll back with the team in 2022. Ibrahim, a redshirt senior, made his announcement via a video on Twitter. pic.twitter.com/Ch8vVxNUaa — Mohamed Ibrahim (@_MoIbrahim) November 24, 2021 “I can’t wait to be back with my brothers, my teammates, this culture, the University of Minnesota and the state,” Ibrahim said. “Minnesota, it’s time to roll.” Before his season-ending injury, Ibrahim totaled 163 yards and two touchdowns on 30 carries against Ohio State. “I felt like I was living a nightmare,” he said. “The season...
MINNEAPOLIS, MN・5 DAYS AGO

Maryland volleyball drops final match of the season to No. 10 Minnesota, 3-1

Nothing separated the Union and Nashville SC in the final MLS standings. Meetings at each team’s home stadium ended in 1-0 results, early goals giving way to defensive stalemates. The similarities between the clubs added import to the quest for home-field advantage in the MLS Cup playoffs. And the payoff...
MLS・1 DAY AGO
Argus Observer Online

Minnesota Fans 'Jump Around' On Field After Upset Win against Wisconsin

The Golden Gophers upset the Badgers and fans rushed the field.
MINNESOTA STATE・1 DAY AGO

ST. PAUL, Minn. (WCCO) — When the Minnesota Wild warmed up on the ice Friday, they traded their green for something blue: a special jersey to celebrate Minnesota’s Indigenous communities. The gear was designed in honor of National American Heritage Day. The reimagined logo includes four tipis along the Mississippi River to represent Dakota homesteads on the shoreline, and they are adorned with Mni Sota Makoce, Minnesota’s name in Dakota language meaning “the land where the waters reflect the skies.” “My ancestors would’ve never imagined this so to see these things and know what they represent for me and my people –...
NHL・2 DAYS AGO
AllHuskers

Nebraska Ends Season with Predictable Loss to No. 16 Iowa

The Huskers will miss a bowl for the fifth straight year after one of the worst seasons in more than 60 years.
IOWA STATE・2 DAYS AGO
CBS Minnesota

After Being Taken To Mental Health Facility, Everson Griffen Placed On Reserve List

MINNEAPOLIS (WCCO) — The Minnesota Vikings placed Everson Griffen on reserve Friday following an incident earlier this week where police and mental health professionals responded to his home. The 33-year-old will not play in Sunday’s game against the San Francisco 49ers. However, it’s unclear how long he’ll be absent from the team. Coach Mike Zimmer has not given an update on Griffen’s immediate future other than to say that the top priority is Griffen’s health and resources for his family. Early Wednesday morning, Griffen posted a concerning video on his Instagram account. The video showed him with a gun saying...
NFL・2 DAYS AGO