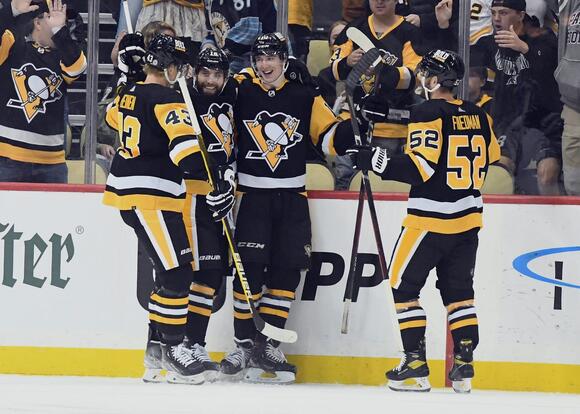 The Penguins will still be shorthanded when they go for their second early-season win over Tampa Bay, this time at PPG Paint Arena.

Mike Sullivan says that although Sid Crosby has started skating with the team, and was on the ice in the morning, he will not play tonight. Furthermore, Kris Letang is showing Covid symptoms and will be out longer term and even though Jeff Carter is asymptomatic he is not expected to clear the protocol until later this week.

Meanwhile, maybe the Pens will continue to score goals, anyway. It’s never much of a surprise when they are among the highest scoring teams in the NHL. But it is a surprise that they’re doing it without so many high-profile players.

Despite the absence of four likely Hall of Famers – Crosby, Malkin, Carter and Letang – plus Bryan Rust, the Penguins put up 7 goals against Toronto and have scored 23 goals in 5 games. With 25 goals in 5 games, only St. Louis is scoring at a higher pace.

What’s different, though, the Pens don’t really have one or two prolific goal-scorers. Danton Heinen, Evan Rodrigues and Drew O’Conner have 3 goals. 26 players on other teams have more. However, the Penguins have 14 different players who have scored at least once; the next closest teams have 12.

Really, the only Pittsburgh forward without a goal that you might expect to have one by now is Kasperi Kapanen but Mike Sullivan figures it’s only a matter of time. “I think it is,” he says, “he has good offensive instincts, he’s had a number of chances, the puck just hasn’t gone in yet.”

“We’re more concerned when players don’t get chances,” Sullivan continues, “then we try to be very proactive to try to help players figure out why. We’re confident he’s going to score.”

Kapanen does have 4 assists. The other forwards without a goal are Sam Lafferty and Zach Aston-Reese who have only played three games; Aston-Reese missed two games due to Covid.

Tristan Jarry was credited with the win during the Penguins’ 2-0 road victory against the Toronto Maple Leafs on Saturday. His 26 saves earned him that triumph. And Jake Guentzel scored the winning goal. An insurance tally by Jeff Carter helped secure the result. But in many ways, the Penguins...
NHL・11 DAYS AGO
Pittsburgh Post-Gazette

Looking back at the best bargains of the Penguins' quiet offseason

ELMONT, New York — For a second, think back to this summer. The Penguins entered free agency with just more than $7 million in salary cap space, several glaring holes on the depth chart and a strong desire to hang on to as many future assets as possible. “It means...
NHL・7 DAYS AGO
93.7 The Fan

The New York Islanders’ UBS Arena wasn’t having a Black Friday sale on goals, but the Pittsburgh Penguins managed to collect another victory on Long Island. The Penguins win 1-0 over the Islanders
NHL・6 DAYS AGO
letsgohawks.net

The Chicago Blackhawks and general manager Kyle Davidson announced a trade on Thursday. Davidson has shipped goalie Malcolm Subban off to the Buffalo Sabres. The Sabres have been in huge need of goaltending help so Subban will give them a huge boost. In return the Blackhawks will get “future considerations”.
NHL・1 DAY AGO

The Sabres needed help in goal and have added Malcolm Subban to the mix following a Thursday trade with the Blackhawks for future considerations. Subban, a pending unrestricted free agent can be looked at as a short-term upgrade over Dell, with Subban and Tokarski handling the crease duties until Anderson is healthy. This also means that Sabres prospect Ukko-Pekka Luukkonen can remain in AHL Rochester and get regular playing time.
NHL・1 DAY AGO
Pgh Hockey Now

PHN Live Chat & Postgame: Penguins Sale, Win and Everything Else

The Pittsburgh Penguins climbed back to .500 with a no-contest win over the Montreal Canadiens on Thursday night. Sidney Crosby scored his first goal of the season and Teddy Blueger potted two as the Penguins rolled, 6-0. Tristan Jarry was also solid, despite facing only 24 shots, many of them...
NHL・14 DAYS AGO
FanSided

Pittsburgh Penguins win every time when they do this

As you know by now, the Pittsburgh Penguins are struggling to remain relevant in the Metropolitan Division. As you also know, the Penguins are entering a pivotal stretch of games coming up. From Nov 18th until Dec 04th, the Penguins will be playing against the Canadian Teams. The Penguins need Wins. So, the question begs…How? How do the Pens get these must needed wins? Knowledge is Power.
NHL・15 DAYS AGO
PITTSBURGH TRIBUNE-REVIEW

Fenway Sports Group is buying the Pittsburgh Penguins, with a price tag some are putting at around $900 million. The Boston-based company announced Monday that, yes, the rumors are true and the Penguins will be added to its stable of teams that spans sports such as baseball, auto racing and soccer in the U.S. and Europe.
NHL・2 DAYS AGO

Penguins Carry Over Strong Third to Get Big Win Over Montreal

The Penguins snapped their three-game losing streak in emphatic fashion with a 6-0 win over the Montreal Canadiens on Thursday at Bell Centre. When a team goes through a stretch where they're not getting the results, it's human nature to have doubt creep in. But instead of letting it continue to snowball and become a mentally fragile group, the Penguins kept their heads up and made sure they played with the urgency and the swagger that head coach Mike Sullivan told them to bring to Montreal.'
NHL・14 DAYS AGO
NHL

MONTREAL -- Sidney Crosby scored his first goal of the season, and the Pittsburgh Penguins defeated the Montreal Canadiens 6-0 at Bell Centre on Thursday. Tristan Jarry made 24 saves for his first shutout of the season, Teddy Blueger had two goals and an assist, and Jake Guentzel had a goal and an assist for Pittsburgh (6-6-4), which ended a three-game losing streak.
NHL・14 DAYS AGO
PITTSBURGH TRIBUNE-REVIEW

An overtime goal by forward Filip Hallander gave the Wilkes-Barre/Scranton Penguins a 3-2 road win against the Charlotte Checkers at Bojangles’ Coliseum in Charlotte, N.C. on Tuesday. Forward Michael Chaput had a goal and an assist for Wilkes-Barre/Scranton (8-6-0-2) while forward Kyle Olson also scored a goal. Goaltender Louis Domingue...
NHL・9 DAYS AGO
WEEI Sports Radio

We’re starting to get an idea of who some of the teams are that might be interested in Boston Bruins forward Jake DeBrusk now that his trade request has gone public.
NHL・2 DAYS AGO

Pittsburgh Penguins goalie Tristan Jarry elicited a question about making Team Canada after his second-consecutive shutout of a popular Canadian team. After blanking Montreal on Thursday, Jarry was again unbeatable in the Penguins’ 2-0 win over the Toronto Maple Leafs. Join PHN Editor-in-Chief Dan Kingerski as he breaks down what...
NHL・12 DAYS AGO
97.1 The Ticket

Holland said he made good decisions and bad decisions during his tenure as GM, “probably lots” of both. By the end, he said “it was time for change.”
NHL・24 DAYS AGO
The Herald

PITTSBURGH (AP) — Tristan Jarry stopped 36 shots to win his fourth straight start and the Pittsburgh Penguins cruised past the reeling Vancouver Canucks 4-1 on Wednesday night. Evan Rodrigues, Bryan Rust, Zach Aston-Reese and Brock McGinn scored for Pittsburgh, which has outscored opponents 15-2 during its winning streak. The...
NHL・8 DAYS AGO
beavercountyradio.com

The Pittsburgh Penguins are slowly gelling, and are on the verge of taking care of business in Canada. Pittsburgh (7-6-4) has won consecutive games for the first time in the 2021-22 campaign, with goaltender Tristan Jarry posting back-to-back shutouts against Montreal on Thursday and Toronto this past Saturday. Jake Guentzel has scored in 4 consecutive games for the Penguins heading into Monday’s game.
NHL・11 DAYS AGO
93.7 The Fan

Tristan Jarry and the Pittsburgh Penguins continued their dominance against Canadian teams on the eve of American Thanksgiving as they pick up a victory against the Vancouver Canucks. With the 4-1 victory
NHL・8 DAYS AGO
WFMJ.com

The Youngstown State men's basketball win over St. Thomas, Minnesota could be a costly win. Garrett Covington went down with a leg injury in the first half and needed help off the court. "They didn't think it was good, possible achilles, " said Coach Jerrod Calhoun. 'I watched the play...
YOUNGSTOWN, OH・14 DAYS AGO
yourokmulgee.com

The Dewar Dragons continued their winning ways last Friday with a 58-8 thrashing of the Garber Wolverines. The Dragons’ current winning streak was extended to 27 games following their second-round mercy-rule win at Dr. Ted Lewis Stadium in Dewar. Senior quarterback Jameson Ross was the offensive leader for the Dragons in the second-round win, using both his legs and his right arm to account for…
DEWAR, OK・9 DAYS AGO
FanSided

Pittsburgh Penguins Thank You for Giving us Wins

The Pittsburgh Penguins have lots to be thankful for this Thanksgiving. As we pass this landmark holiday, it is time to remember the past, enjoy the company of our family, and look forward to the future. It is a time to say, thank you, for all that you have and for all that you have done, up until now. How does this relate to hockey and the Pittsburgh Penguins?
NHL・6 DAYS AGO