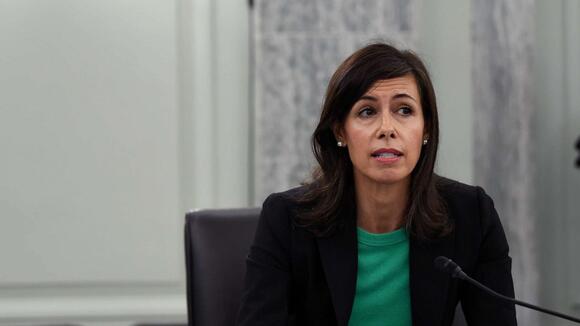 Jessica Rosenworcel is in line to make history as the first woman to head the Federal Communications Commission, after President Joe Biden announced on Tuesday his intent to officially nominate her as a commissioner and designate her as chair of the agency tasked with regulating telecommunications technology.

Rosenworcel has served as acting chair of the FCC since January, but would need to be confirmed by the Senate to assume her new role as chair in an official capacity. She has been a commissioner since 2012.

Her nomination could also mean the end to Trump-era clampdowns on net neutrality, as Rosenworcel has been a fierce advocate for an internet that is "open and available for all."

"The internet should be open and available for all. That’s what net neutrality is about," Rosenworcel said in an October 2020 statement . "It’s why people from across this country rose up to voice their frustration and anger with the Federal Communications Commission when it decided to ignore their wishes and roll back net neutrality."

MORE: Lawmakers say Amazon reps, including Jeff Bezos, misled or 'may have lied to Congress'

She added that she views the rollbacks to net neutrality as a way to "make it easier for broadband companies to block websites, slow speeds, and dictate what we can do and where we can go online."

During her brief stint as acting chair, Rosenworcel has focused on closing the digital divide at a time when the COVID-19 pandemic resulted in an abrupt dependence on internet access for millions of Americans in order to go to school or do their jobs.

Rosenworcel's policy approach and the historic nature of her nomination has also been lauded for representing the needs of women in a sector where they remain underrepresented in leadership positions.

"Every issue is a gender issue, even broadband access," Rosenworcel wrote in a July op-ed she co-authored with Valerie Jarrett, a former senior adviser to President Barack Obama.

The op-ed cited how 31% of women have worried about paying their broadband bill during the pandemic, and delved into the issues working mothers especially faced when schools shuttered for in-person learning. The piece promoted the Emergency Connectivity Fund, which aims to support students who need internet access at home in order to participate in virtual schooling during the health crisis.

The White House also recognized her inclusive approach to telecommunications policy, especially for low-income communities, in a statement Tuesday.

"During her time at the agency, she has worked to promote greater opportunity, accessibility, and affordability in our communications services in order to ensure that all Americans get a fair shot at 21st century success," a statement from the White House announcing her nomination Tuesday said. "From fighting to protect an open internet, to ensuring broadband access for students caught in the Homework Gap through the FCC’s Emergency Connectivity Fund, to making sure that households struggling to afford internet service stay connected through the Emergency Broadband Benefit program, she has been a champion for connectivity for all."

She has also led a fight against illegal robocalls, the statement added, and worked to enhance consumer protections.

Rosenworcel previously worked as a senior communications counsel for the Senate Committee on Commerce, Science, and Transportation, and before that practiced communications law after graduating from the New York University School of Law.

The mother of two is originally from Hartford, Connecticut, but currently lives in Washington, D.C., with her husband.

In addition to announcing Rosenworcel's nomination, the Biden administration said Tuesday that it plans to nominate fellow net neutrality advocate Gigi Sohn as an FCC commissioner. If both the new nominees are confirmed, it would give the FCC a Democratic majority. If their confirmations are delayed until Rosenworcel's term expires at the end of the year, Republicans would hold a majority on the commission -- setting up a potential political showdown over their confirmations.

The Senate Commerce Committee advanced two of U.S. President Joe Biden's picks for the Federal Communications Commission and the Federal Trade Commission to a full Senate vote, but an even split on one nominee signals that confirmation is uncertain. Senators voted in a vast majority Dec. 1 to push acting...
CONGRESS & COURTS・1 DAY AGO
tvtechnology.com

10 Things in Politics: Inside Buttigieg's emails to staffers

And the CDC urges all adults to get boosters amid Omicron concerns.
CONGRESS & COURTS・2 DAYS AGO
tvtechnology.com

WASHINGTON, D.C.—In advance of the Senate hearing scheduled for December 1 on the nomination of Gigi Sohn to the Federal Communications Commission (FCC), National Association of Broadcasters (NAB) president and CEO Gordon Smith has expressed “serious concerns” about her previous involvement as a director in the streaming service Locast. After...
U.S. POLITICS・3 DAYS AGO

Information integrity and intellectual property rights (IPR) are emerging as front lines in the increasingly diverse and complex national security threats confronting America — and both fall under the authority of the Federal Communication Commission (FCC). This new reality makes the Biden administration’s nomination of Gigi Sohn to the FCC...
PRESIDENTIAL ELECTION・5 DAYS AGO
KTLA

President Joe Biden announced plans Friday to nominate two new members to the U.S. Postal Service Board of Governors, a potential first step in removing Postmaster General Louis DeJoy. A Trump-era appointee, DeJoy became a political lightning rod during the 2020 elections as changes he made to the Postal Service slowed delivery times during a […]
PRESIDENTIAL ELECTION・13 DAYS AGO
Business Insider

Fauci seemingly suggested that the Texas Republican should be prosecuted over his role in lending legitimacy to the mob that stormed the US Capitol.
CONGRESS & COURTS・3 DAYS AGO
The Guardian

Democrats took a drubbing in elections last month, in part, for simply failing to govern. Endless bickering within their congressional caucus squandered chances to pass major reforms in infrastructure, climate and social policies. So why are Republicans rushing to make the same mistake? ...
U.S. POLITICS・1 DAY AGO
Reuters

WASHINGTON (Reuters) -U.S. Senator Lisa Murkowski of Alaska, a three-term Republican who voted to convict President Donald Trump in his second impeachment trial, announced her bid for re-election on Friday with a nod to bipartisanship. “I will work with anyone from either party to advance Alaska’s priorities and I will...
CONGRESS & COURTS・20 DAYS AGO
WashingtonExaminer

Wyoming Republican Rep. Liz Cheney, vice chairwoman of the House select committee tasked with investigating the Jan. 6 attack on the U.S. Capitol, issued a warning to former President Donald Trump amid his posturing that he wanted to debate members of the committee: Lie, and there will be criminal penalties.
CONGRESS & COURTS・18 HOURS AGO
AOL Corp

By the time the FBI showed up to his mom’s house in Southern California to arrest him in late March, 38-year-old Donald Trump supporter Danny Rodriguez knew he was in trouble. You’d be hard-pressed to find a bigger Trump fan than Rodriguez: He even tried to join the Army when Trump became president, showing up to a recruiting office with a Trump shirt on. So when Trump said that the election had been stolen, Rodriguez actually believed him, and when the president tweeted “Be there, will be wild!” about a protest in D.C. on Jan. 6, Rodriguez started making plans.
PUBLIC SAFETY・23 HOURS AGO

The now-former spokesman for District of Columbia Democratic Mayor Muriel Bowser told Fox News on Wednesday that President Biden's tenure in office has led him to change party affiliation and also to vote for GOP businessman Glenn Youngkin in the off-year gubernatorial election in Virginia, where he resides. Victor Jimenez...
PRESIDENTIAL ELECTION・17 HOURS AGO
wrbl.com

ATLANTA (WSAV) — Gov. Brian Kemp released a flurry of tweets Wednesday afternoon attacking Democrat Stacey Abrams after she announced her bid to replace him as governor in 2022. The two are prepping for a rematch of the 2018 gubernatorial race where Kemp narrowly defeated Abrams. Kemp garnered 50.2% of...
POLITICS・22 HOURS AGO
Fortune

Subscribe to Fortune Daily to get essential business stories straight to your inbox each morning. President Joe Biden is using every tool in his arsenal to send a clear message to Americans this holiday season: Don’t pin inflation on me. Republicans have been working to blame the president and Democrats...
PRESIDENTIAL ELECTION・21 HOURS AGO
WashingtonExaminer

Former President Donald Trump says he plans to sue a woman who accused him of alleged raping her two decades ago.
PUBLIC SAFETY・16 HOURS AGO
Complex

Debt Collectors Can Legally Slide Into Your DMs Now

U.S. debt collectors have a new tool at their disposal: social media. Under financial regulations that went into effect Tuesday, debt collection agencies can now contact people via text or direct messages on social media. The rule was added to the Fair Debt Collection Practices Act, a 44-year-old piece of legislation that controls how debt collectors can communicate with borrowers. According to the Washington Post, the Consumer Financial Protection Bureau announced the change in autumn 2020, citing rapid developments in technology and transforming methods of communication.
PERSONAL FINANCE・21 HOURS AGO
Business Insider

These three Democrats told us why they're the right leader to defeat DeSantis, who's a rising GOP star and 2024 presidential contender.
FLORIDA STATE・1 DAY AGO
theeastcountygazette.com

Stimulus Checks: Possible Bonus Payments Could Be Coming Near Christmas

A new Stimulus Checks update reveals that possible bonus payments could be coming around Christmas for those living in the Prairie State. According to the Sun, a proposal about the stimulus checks was made by Republicans in Illinois’ House of Representatives. Should the proposal pass, single taxpayers who are earning...
POLITICS・17 HOURS AGO