Tuesday is Election Day. What’s on the ballot? 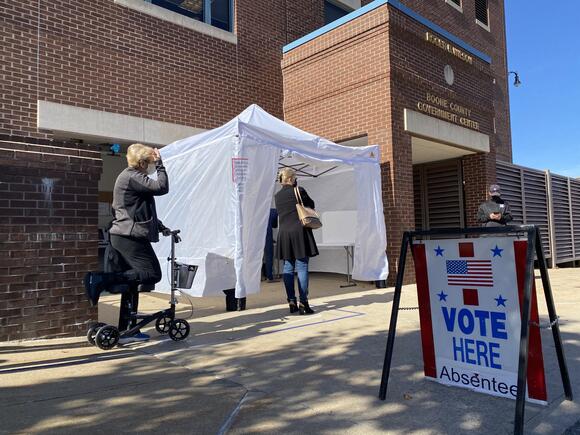 It may be a small one, but there is an election on Nov. 2.

In Mid-Missouri, voters in just a few areas will see issues on their ballots. Each issue is a question about whether to keep or raise taxes.

Only one issue will appear on ballots in Boone County, and only in the City of Columbia.

The city is asking voters to extend an eighth-cent portion of a sales tax that pays for parks operations and projects. A "yes" vote would approve the tax for 10 more years. City leaders plan to use the money for several large projects, including expansion of the city parks' fieldhouse, improvements at the Activity and Recreation Center and Stephens Lake Park and money for the Lake of the Woods Recreation Area.

Columbia's sales tax rate is 7.975% . The rate is higher in certain transportation districts within the city.

Only Jefferson City voters will get ballots in Cole County. They'll decide on whether to implement a quarter-cent sales tax that will pay for public safety expenditures.

The tax will go toward salaries and equipment for the police and fire departments.

Some voters in these Lake-area counties will see the same two questions on their ballots.

Voters in the Osage Beach Fire Protection District, which goes across the county line, will decide on approving $13 million in bonds and a 30-cent-per-$100 property tax to pay for them. The bonds would pay for a new fire station, renovation of current buildings and new equipment, including trucks.

The Orearville R-IV School District wants to make permanent its property tax levy level of about 35 cents per $100 of value.

A "yes" vote would keep the tax rate the same. However, taxes won't go down because the current, temporary levy will be made permanent.

The post Tuesday is Election Day. What’s on the ballot? appeared first on ABC17NEWS .

QUESTION OF THE DAY: Should non-elected officials be able to issue health orders?

The Missouri Department of Health and Senior Services reported 1,272 hospitalized COVID-19 patients and 34% of inpatient and outpatient bed capacity left as of Saturday, the most recent data available. Intensive care units have 24% of capacity remaining, with 309 COVID-19 patients being treated in ICUs statewide. The post More Missourians in hospitals with COVID-19 as state begins monitoring for omicron appeared first on ABC17NEWS.
MISSOURI STATE・20 HOURS AGO
KMIZ ABC 17 News

Check back for updates related to the coronavirus pandemic in Missouri. The post TUESDAY UPDATES: Hospitalizations trending up as Missouri monitors for omicron variant appeared first on ABC17NEWS.
MISSOURI STATE・22 HOURS AGO
KMIZ ABC 17 News

COLUMBIA, Mo. (KMIZ) Giving Tuesday marks the start of CoMoGives, a nearly decade long program dedicated to raising funds for non-profits across Mid-Missouri. This year marks the ninth campaign of CoMoGives and the program that started with 30 organizations and raising $62,400 has now turned into 148 organizations and last year raised $1.6 million. John The post Giving Tuesday marks the start of CoMoGives to support non-profits across Mid-Missouri appeared first on ABC17NEWS.
COLUMBIA, MO・14 HOURS AGO

JEFFERSON CITY, Mo. (KMIZ) Due to staffing shortages and COVID-19, the Jefferson City Animal Shelter announced a temporary closure. The shelter will be closed to the public Monday through Friday. The shelter says this is to allow the limited staff to focus on their core public safety duties and the care for the animal population The post Jefferson City animal shelter announces temporary closure appeared first on ABC17NEWS.
JEFFERSON CITY, MO・3 DAYS AGO
KMIZ ABC 17 News

The City of Columbia Solid Waste Utility wants to get some public feedback from anyone interested in the proposed recycling drop-off center at the intersection of Oakland Gravel Road and Vandiver Drive. The post Public gives feedback for proposed Oakland Gravel Road recycling drop-off center appeared first on ABC17NEWS.
COLUMBIA, MO・7 DAYS AGO
KMIZ ABC 17 News

COLUMBIA, Mo. (KMIZ) Thanksgiving breaks began for some schools across Mid-Missouri Monday after some districts decided to extend the holiday break this year to provide some relief to staff and students. Jefferson City and Southern Boone are two of many that extended their break, saying that the demands of the past 18 months have worn The post Some Missouri teachers are getting an extended Thanksgiving break while others are left frustrated appeared first on ABC17NEWS.
MISSOURI STATE・8 DAYS AGO
KMIZ ABC 17 News

Controversial murals to be relocated to Columbia College