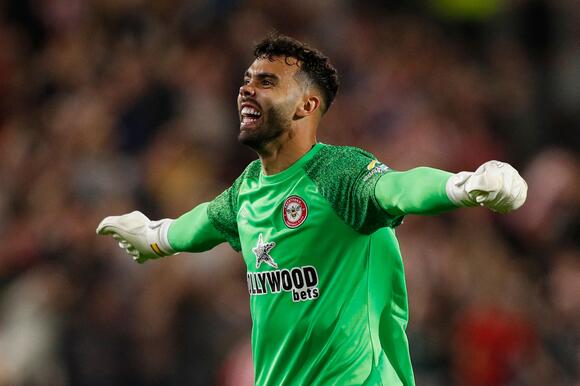 Brentford have suffered a huge injury setback with goalkeeper David Raya ruled out for up to five months with a knee ligament injury.

The Spaniard was hurt in a collision with Leicester’s Ayoze Perez late in the Bees’ 2-1 home defeat in the Premier League on Sunday.

The club said the 26-year-old, who has been Brentford’s first-choice keeper since joining from Blackburn in 2019, has suffered an injury to his posterior cruciate ligament.

Brentford’s head of medical Neil Greig said: “Positively, this type of injury usually heals well without the need for surgery.

“David has already begun using a brace specifically designed to aid this process.

“We anticipate the recovery period for an injury like this to be somewhere between four and five months, which will enable David to be back to his previous high levels well before the end of the season.”

Thomas Frank is now likely to turn to summer signing Alvaro Hernandez, the 23-year-old who has made two appearances in the Carabao Cup since joining on loan from Huesca in August.

Bryan Mbeumo and Ethan Pinnock also picked up injuries against Leicester which will rule them out of Wednesday’s Carabao Cup clash with Stoke.

Paris Saint-Germain are “furious” that Hakim Ziyech's loan move fell through after Chelsea failed to file the necessary paperwork in time.It has been claimed to the Independent that the wrong documentation or incorrectly filled-out forms were sent four times, as one source raged about the Premier League club being overly focused “with trying to do the Enzo Fernandez deal”.Chelsea have been contacted for comment.Ziyech was left stranded in Paris after travelling to complete the move, although French football's governing body had to meet on Wednesday morning to consider the approval of the deal, since the forms were eventually sent....
1 HOUR AGO
The Independent

Chelsea have confirmed World Cup-winner Enzo Fernandez has completed his British record £106.8million transfer from Benifica after negotiations went to the final hours of a dramatic transfer deadline day.Benfica were first to announce the signing overnight and Chelsea hailed Fernandez’s capture on Wednesday morning.“The Argentinian midfielder has completed his transfer from Benfica to Chelsea,” said a statement on the club’s website.The Argentinian midfielder has completed his transfer from Benfica to ChelseaChelsea statementThe PA news agency understands that the 22-year-old undertook a medical in Lisbon on Tuesday evening as the clubs worked towards an agreement, with disagreements relating to the instalments...
1 HOUR AGO
The Independent

Liverpool fans were left watching on during the transfer deadline day activities, with the Reds playing no part in the late rush for additional signatures and squad additions.Despite floundering in mid-table after a dismal run of results over the past few months - before and since the World Cup - Jurgen Klopp’s team only added a single additional forward to their ranks.That came despite cries for - and plenty of links with - central midfielders, an area where Liverpool have struggled this term for both performance level and cohesion, amid injuries and the loss of form from previously key...
2 HOURS AGO
The Independent

Leicester City have announced chairman Aiyawatt Srivaddhanaprabha has relieved the club of the outstanding £194million debt which was owed to parent company King Power International.The Premier League club said over £194m in loans and related interest had been capitalised into equity issued to KPI, which is wholly owned by the Srivaddhanaprabha family.Leicester said in a statement: “These loans have been provided by KPI to the club over the last four years to fund the construction of the club’s world-class new training ground at Seagrave and to continue to support the club’s investments into its squad and women’s football during the...
1 HOUR AGO
The Independent

Surrey all-rounder Tom Curran is taking an indefinite break from red-ball cricket to focus on his physical and mental health.Curran, who has played two Test matches and 28 one-day internationals for England, had recently been playing for the Desert Vipers in the ILT20 and will soon be joining up with Islamabad United in the Pakistan Super League.The 27-year-old, who has endured injury problems in recent years, said: “The last couple of years have not been easy for me. I have had a lot of time and this isn’t a decision that I’ve taken lightly.Where I find myself at this exact...
2 HOURS AGO