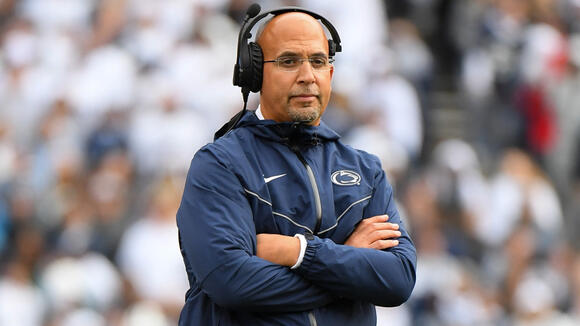 With rumors swirling about his candidacy for the vacant USC job and his team coming off back-to-back losses, Penn State head coach James Franklin thrice referred to Ohio State as “Illinois” during his press conference on Tuesday.

“My focus is completely on Illinois and this team and this program,” Franklin said when asked if he’s committed to being the Nittany Lions’ coach next season. “I think I’ve shown over my eight years my commitment to this university and this community, and that’s kind of my statement.

“We’re trying to be focused on Illinois and talking about Illinois as much as we can.”

Penn State (5-2 overall, 2-2 in the Big Ten) is coming off a nine-overtime loss to the Illini on Saturday afternoon, but will travel to Ohio State this weekend (7:30 p.m. on ABC) for a game that will have a significant impact on the Big Ten East Division race.

“(It’s a) tremendous challenge going on the road to The Big House,” Franklin said, mistaking Michigan Stadium for Ohio Stadium. “We’ve got to get healthy, we’ve got to play smart and, obviously, we have to limit explosive plays. This team has the ability to put points on the board, so it’s a tremendous challenge.”

It wasn't the best performance for veteran guard Jamari Wheeler but, considering all of the circumstances, Buckeye fans should certainly appreciate his effort in the team's road win Sunday night to launch Big Ten play. Wheeler, a graduate transfer from Penn State, helped lead Ohio State to a 76-64 triumph...
COLLEGE SPORTS・23 HOURS AGO
BuckeyesNow

After falling behind early, the Buckeyes fought back to regain the lead (and then some) in their first Big Ten game of the season. Ohio State currently leads 41-30 at the break. Here are some key observations and takeaways from the first half:. * Not sure why Penn State fans...
OHIO STATE・1 DAY AGO
BuckeyesNow

Ohio State Moves Up To No. 6 In Final College Football Playoff Rankings

For the first time since the 2018 season, Ohio State won’t be one of the four teams competing for a national title as the Buckeyes came in at No. 6 in the final College Football Playoff rankings of the season. After losing to eventual Big Ten champion Michigan on Nov....
OHIO STATE・1 DAY AGO
BuckeyesNow

Ohio State men’s basketball coach Chris Holtmann is “feeling fine” and with the team for tonight’s game at Penn State, per confirmation from the Athletics Communications Department. A few days ago, lead assistant coach Ryan Pedon filled in for a sick Holtmann to help preview the Big Ten opener for...
OHIO STATE・1 DAY AGO

Two weeks after it fell out of the rankings, the Ohio State men’s basketball team moved back into the Associated Press Top 25 at No. 21 following wins against previously top-ranked Duke and at Penn State. The Buckeyes started the season at No. 17 in the AP Poll but fell...
OHIO STATE・8 HOURS AGO
BuckeyesNow

Ohio State quarterback C.J. Stroud was named on Monday evening as one of four finalists for the Heisman Trophy, which is presented annually to the nation’s most outstanding player and is widely regarded as the most prestigious individual award in college football. A redshirt freshman from Rancho Cucamonga, Calif., Stroud...
OHIO STATE・2 HOURS AGO
BuckeyesNow

Ohio State Stays At No. 7 In Associated Press Top 25 Poll After Conference Championships

Ohio State stayed at No. 7 in the Associated Press Top 25 Poll after not playing in the Big Ten Championship Game on Saturday evening. It snapped a streak of four straight seasons in which the Buckeyes won the conference title and will likely end their streak of consecutive appearances in the College Football Playoff at two.
OHIO STATE・1 DAY AGO
BuckeyesNow

As the higher-ranked team in the final College Football Playoff rankings of the season, Ohio State will wear its standard home uniform in the Rose Bowl against Utah. The Buckeyes are 8-7 in 15 appearances in “The Granddaddy of Them All,” including 3-3 in games while wearing scarlet jerseys. That includes the 1921 game against Cal – which was color-vs-color – and the 2019 victory over Washington.
OHIO STATE・1 DAY AGO

Ohio State is officially Rose Bowl-bound by virtue of being the highest-ranked, non-playoff team in the Big Ten and will take on Pac-12 champion Utah in Pasadena on New Year’s Day. It will be just the second meeting all time between the Buckeyes and Utes, who traveled to Columbus in...
OHIO STATE・1 DAY AGO
BuckeyesNow

As first reported by Lettermen Row’s Jeremy Birmingham and subsequently confirmed BuckeyesNow, Ohio State redshirt junior quarterback Jagger LaRoe has entered his name into the transfer portal. The 6-foot-3 and 225-pound LaRoe joined the Buckeyes as a preferred walk-on after transferring from Texas A&M, where he redshirted during the 2018...
OHIO STATE・1 DAY AGO
BuckeyesNow

Unlike the last four seasons when Ohio State was playing in the Big Ten Championship Game, the Buckeyes are watching from home this weekend as Michigan and Iowa battle for the conference title. That not only means Ohio State’s streak of four straight Big Ten championships will come to an...
OHIO STATE・2 DAYS AGO
BuckeyesNow

On Friday, less than four months after he arrived at Ohio State, freshman quarterback Quinn Ewers entered his name into the transfer portal. It was an unsurprising end to an experiment that saw Ewers, the top-rated prospect in the country, reclassify from the 2022 recruiting cycle and enroll early in order to profit from his name, image and likeness.
OHIO STATE・1 DAY AGO

As first reported by Bucknuts’ Patrick Murphy and subsequently confirmed by BuckeyesNow, Ohio State redshirt sophomore linebacker/safety Craig Young has entered his name into the transfer portal. The 6-foot-3 and 223-pound Young was expected to play a significant role for the Buckeyes this season at the Bullet position, a hybrid...
OHIO STATE・2 DAYS AGO
BuckeyesNow

MICHIGAN vs. IOWA – Saturday, 8 p.m. on FOX. I really wish I had more faith and Iowa’s offense. Their defense is certainly good enough to give Michigan a really good game. But it’s hard for me to pick Iowa when they have consistently underwhelmed offensively all year. I think...
OHIO STATE・3 DAYS AGO
BuckeyesNow

Notre Dame officially promoted former Ohio State linebacker Marcus Freeman from defensive coordinator to head coach on Friday morning. It’s been a rapid ascension through the coaching ranks for Freeman, who played for the Buckeyes from 2004-08 and was a graduate assistant with the program in 2010. He also spent...
OHIO STATE・3 DAYS AGO
BuckeyesNow

Oklahoma State has a chance to make it to the College Football Playoff with a convincing win over Baylor, though that also depends on what happens with Georgia, Michigan, Alabama and Cincinnati on Saturday. The Bears, meanwhile, can capture their first conference title since 2014 with a win. They’ll likely...
OKLAHOMA STATE・3 DAYS AGO
BuckeyesNow

Once Quinn Ewers reclassified in August, it was only a matter of time before Ohio State found another quarterback to take his place in the 2022 recruiting cycle. Most figured it would be Medina, Ohio, four-star Drew Allar, who is not only the top-rated signal-caller in the state but also one of the fastest-rising prospects in the nation following his stellar season.
OHIO STATE・4 DAYS AGO
BuckeyesNow

According to a report from On3’s Matt Zenitz, Notre Dame is expected to promote former Ohio State linebacker Marcus Freeman from defensive coordinator to head coach in the coming days. The 35-year-old Freeman would replace Brian Kelly, who left the Fighting Irish earlier this week to be the new head...
OHIO STATE・5 DAYS AGO
BuckeyesNow

Ohio State quarterback C.J. Stroud, running back TreVeyon Henderson and cornerback Denzel Burke were named on Thursday as semifinalists for the Shaun Alexander Freshman of the Year Award, which is presented annually to the most outstanding freshman in college football. Stroud, a redshirt freshman from Rancho Cucamonga, Calif., has thrown...
OHIO STATE・4 DAYS AGO
BuckeyesNow

According to a report from Pete Sampson of The Athletic, Ohio State running backs coach Tony Alford turned down the opportunity this week to join Brian Kelly’s new staff at LSU. Alford, who is in his seventh season with the Buckeyes, served as the wide receivers and running backs coach...
OHIO STATE・5 DAYS AGO