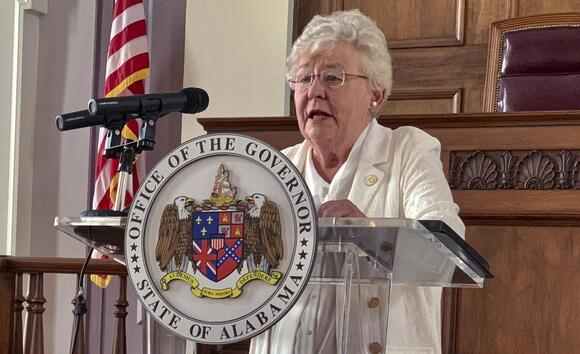 A labama Gov. Kay Ivey told state agencies Monday not to cooperate with the federal vaccine mandate and instead put their efforts into filing a lawsuit against the vaccine requirements.

Ivey signed an executive order prohibiting penalties from state employers on employees or businesses that decide not to receive the vaccine. If federal law requires a penalty, agencies are to notify the employee or business and say that the state does not condone the penalty.

“The federal government’s outrageous overreach has simply given us no other option but to begin taking action, which is why I am issuing this executive order to fight these egregious COVID-19 vaccine mandates,” Ivey said in a statement.

The news comes days after universities in the Alabama State school system have told professors and employees they must get vaccinated. Ivey's order does not affect the school system's requirement because the campuses are federal contractors and thereby under federal jurisdiction.

Biden's mandate states all federal employers with over 100 employees must require their staff to be vaccinated or have weekly tests for the coronavirus. Biden's mandate also requires vaccinations of all employees of the executive branch.

The federal mandate has been met with some hostility from conservatives, with members of the Republican Party calling the mandates an "overreach." Several states, including Arkansas, Texas, Kansas, and Wyoming, have discussed ways to counter the mandates. GOP attorneys general have also said they will sue the Biden administration over the federal mandate.

The Alabama Democratic Party on Monday asserted mandates are not new and cited seatbelts and other vaccines that are required to go to public schools as justification of the mandates.

“What’s wrong with a mandate that protects public health and keeps our hospitals from overcrowding?” the party asked the Associated Press in its statement.

Ivey said she is working with Alabama's attorney general to file a lawsuit blocking the mandate soon.

Four states with Republican legislatures have changed their laws to permit those who lose their jobs over vaccine mandates to still collect unemployment benefits.
HEALTH・12 HOURS AGO
WashingtonExaminer

Disgraced former New York Gov. Andrew Cuomo stepped back into his chief executive's shoes to offer unsolicited guidance to New Yorkers on how to deal with the omicron coronavirus variant.
PUBLIC HEALTH・16 HOURS AGO
Business Insider

GOP-controlled legislatures are seeking to undermine President Joe Biden's vaccine mandate. Four states have passed bills that would provide unemployment benefits to those fired for refusing the vaccine. Vaccine mandates have become an issue of fierce partisan controversy. Republican-controlled legislatures in four states are changing their unemployment laws so that...
U.S. POLITICS・18 HOURS AGO

JEFFERSON CITY, Mo. (AP) — A federal judge on Monday blocked President Joe Biden’s administration from enforcing a coronavirus vaccine mandate on thousands of health care workers in 10 states that had brought the first legal challenge against the requirement. The court order said that the federal Centers for Medicare & Medicaid had no clear authority from Congress […]
IOWA STATE・10 HOURS AGO
county10.com

(Cheyenne, WY) – Governor Mark Gordon welcomed a preliminary injunction issued today, November 29th, by the United States District Court, Eastern District of Missouri that halts implementation and enforcement of a rule from the Centers for Medicare and Medicaid Services (CMS) that would impose a vaccine mandate on healthcare workers. Governor Gordon and Attorney General Bridget Hill entered Wyoming in this lawsuit, challenging the federal mandate.
CHEYENNE, WY・12 HOURS AGO
ingrams.com

House Bill No. 2001 was signed into law by Kansas Governor Laura Kelly this week. The new piece of legislation in part eases the vaccine exemption process for Kansas employees on the basis of health and religious beliefs. In a 2021 Special Session this past Tuesday, Kansas Gov. Laura Kelly...
KANSAS STATE・5 DAYS AGO
The Citizens Voice

A federal judge has denied a petition by more than 100 unvaccinated employees to block the Geisinger Health System’s vaccine mandate for religious reasons, opining in a decision Tuesday that the employees’ claims “fail across the board” in part because the state and federal constitutions “do not give the employees the rights that they think they do.”
U.S. POLITICS・5 DAYS AGO

VERIFY: Mandate that federal workers get the COVID-19 vaccine does not apply to welfare recipients

HOUSTON — President Joe Biden signed two executive orders requiring that federal workers and contractors get the COVID-19 vaccine. Someone asked the VERIFY team whether that also applies to people on Medicare and food stamps. President Biden made the announcement during a speech from the White House on Sept 9,...
U.S. POLITICS・7 DAYS AGO
12news.com

WASHINGTON — Monday marks a key deadline for part of President Joe Biden's federal COVID-19 vaccine mandate. Back in September, Biden signed Executive Order 14043, requiring 3.5 million federal employees to show they are fully vaccinated by Nov. 22, in order to be considered compliant. According to one U.S. official, "more than 90% of federal workers" have had at least one shot by today's deadline.
U.S. POLITICS・7 DAYS AGO
WJBF

As the deadline arrives for the federal vaccine mandate, its effect on the traveling public is still unknown.
U.S. POLITICS・7 DAYS AGO
WLOX

GULFPORT, Miss. (WLOX) - Health care workers are latest focus of anti vaccine mandate activists. Gulf Coast Against Mandates has called for a rally for health care workers on December 4, two days before workers nationwide would have to get their first COVID shots in order to be fully vaccinated by the January deadline.
GULFPORT, MS・7 DAYS AGO

TOPEKA, Kansas— Republican lawmakers look determined to take on the Biden administration’s insistence that employers pressure their workers to get vaccinated against COVID-19. The Legislature meets in a special session next week to engage in battle with the federal government over the vaccine mandates. But courts will likely have the...
KANSAS STATE・7 DAYS AGO
News4Jax.com

TALLAHASSEE, Fla. – The state of Florida has been dealt an initial blow in its battle to block a federal rule requiring health care workers to get vaccinated. The federal policy conflicts with the state law banning vaccine mandates and could result in facilities facing stiff fines, but health care groups are most concerned about how the mandate will affect staffing levels.
FLORIDA STATE・7 DAYS AGO
buckrail.com

WYOMING — This morning, Wyoming Superintendent Jillian Balow addressed the Biden Administration’s federal vaccine mandates in a statement sent to superintendents of school districts across the state. “I am opposed to the federal government imposing these mandates and am happy to see that not only did the federal 5th Circuit...
HEALTH・7 DAYS AGO
KMBC.com

The Occupational Safety and Health Administration said it "suspended activities related to the implementation and enforcement" of the requirements "pending further developments in the litigation." The U.S. Court of Appeals for the Fifth Circuit, considered one of the most conservative in the country, ordered OSHA last week to "take no...
LABOR ISSUES・11 DAYS AGO
snntv.com

Private businesses in Florida will be forced to let workers opt out of coronavirus vaccine mandates after Gov. Ron DeSantis signed a sweeping legislative package Thursday to combat White House virus rules. DeSantis, a Republican, signed the bills into law at a ceremony alongside leaders of the GOP-controlled statehouse and...
FLORIDA STATE・10 DAYS AGO