Manchin open to raising debt ceiling with only Democratic votes 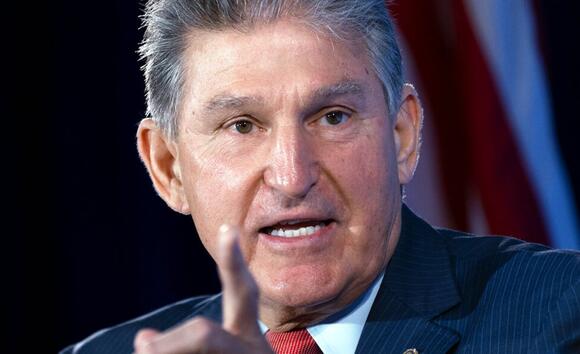 D emocratic Sen. Joe Manchin said that his party has “a responsibility” to raise the debt ceiling by itself should an agreement fail to be made with Republicans.

The West Virginia senator on Tuesday endorsed the idea of Democrats raising the federal debt ceiling through the budget reconciliation process, which allows for the passage of fiscal legislation with only a simple majority, bypassing any filibuster.

He also said that he thinks that the debt ceiling should be raised using the 14th Amendment, which some constitutional scholars argue may authorize the president to continue borrowing money without congressional approval.

“The debt limit should be the 14th Amendment. The president has the right to make that decision. We have the right to override if we think he went too far. That to me is the simplest — it takes all of the politicians out of making a deal,” Manchin said during an event before the Economic Club of Washington, D.C.

Manchin lamented the current state of partisan politics and said it is “absolutely insane” that raising the debt limit is being used as a “political weapon.” He said that both sides should “call a truce” and work together on an agreement.

The three-term senator said that if the Republicans can’t come to an agreement with his party over raising the debt limit, because they are in the majority, Democrats “have the responsibility” to raise it through reconciliation.

“That’s our responsibility, and I will take that and do it,” he said.

Congress kicked raising the debt ceiling down the road when it voted earlier this month on a short-term fix to extend the nation’s borrowing limit until early December.

Republicans want Democrats to tie a long-term extension to their partisan infrastructure and social spending package, while Democrats have balked at that notion and are insisting Republicans join with them to raise the borrowing limit. Ten Republicans would have to join all the Senate Democrats in order for a bipartisan extension to pass.

A growing chorus of conservatives is demanding that Senate Republicans shut down the government if President Joe Biden refuses to scrap the federal coronavirus vaccine mandate.
CONGRESS & COURTS・18 HOURS AGO
WashingtonExaminer

Minority Leader Mitch McConnell has grown increasingly fond of the Senate’s most centrist Democrat, West Virginia’s Joe Manchin, who is about the only person capable of blocking passage of President Joe Biden’s multitrillion-dollar social welfare and green energy legislation, known as "Build Back Better."
CONGRESS & COURTS・16 HOURS AGO
WashingtonExaminer

Eighteen House Democrats are taking a hike come January 2023, and House Speaker Nancy Pelosi’s spot up top may be available for another Democrat if the party holds onto their razor-thin majority. Pelosi, D-Calif., has yet to officially announce her decision for 2022 and beyond. Last year, she implicitly reaffirmed...
CONGRESS & COURTS・23 HOURS AGO

Sen. Joe Manchin is noncommittal on extending the child tax credit. On Tuesday, he told Insider "everybody's still talking and working. It's a work in progress." Millions of children are receiving the CTC, hundreds of thousands of them in Manchin's home state. On Tuesday, Sen. Joe Manchin of West Virginia...
CONGRESS & COURTS・18 HOURS AGO
FiveThirtyEight

In today’s hyperpartisan political climate, members of Congress risk losing support when they deviate from their party’s position on important votes. In fact, over the past year, we’ve already seen this play out twice for Republicans in the House of Representatives. First, 10 House Republicans infuriated their colleagues and the...
NEW YORK CITY, NY・1 DAY AGO
POLITICO

House Majority Leader Steny Hoyer argued during a closed-door meeting late Tuesday that House Democrats need to bring a funding patch to the floor on Wednesday, with or without the bipartisan blessing of their Senate counterparts.
CONGRESS & COURTS・12 HOURS AGO
Newsweek

(CNN) — On Monday, New York Democratic Rep. Tom Suozzi announced he plans to leave his 3rd District seat behind to run for governor in 2022. Asked about whether control of his seat -- or the House more generally -- mattered much in his decision, Suozzi said it "wasn't a big factor."
CONGRESS & COURTS・1 DAY AGO
Washington Examiner

President Joe Biden’s "Build Back Better" legislation is on the docket for the Senate. All eyes are on Democratic Sens. Joe Manchin and Kyrsten Sinema. However, after the sweeping wins for Republicans in Virginia and elsewhere this November, other Democrats up for reelection in 2022 should evaluate if voting for the $1.75 trillion bill is in their best interest.
CONGRESS & COURTS・3 HOURS AGO
brproud.com

WASHINGTON D.C. (BRPROUD) – Once again, the United States government faces a partial shutdown at the end of the week if a temporary budget is not approved. The country also faces potentially defaulting on its debts by Dec. 15. To avoid this the debt ceiling would need to be raised but Republicans are demanding Democrats share just how much they want to borrow.
CONGRESS & COURTS・15 HOURS AGO
Washington Post

Is McConnell going soft on the debt limit? There’s a lesson here for Democrats.

Within the next few weeks, we could face a default on America’s debts, triggering an economic crisis with global implications. But whether that comes to pass is in the hands of Senate Minority Leader Mitch McConnell (R-Ky.) — and he seems to be hesitating on pushing us to the brink.
CONGRESS & COURTS・17 HOURS AGO

The immigration measures face an uphill battle in the Senate, which is expected to take up the legislation next month, and they could be stripped by the Senate parliamentarian well before that.
LOS ANGELES, CA・2 HOURS AGO
WashingtonExaminer

Despite his public opposition to expansive, taxpayer-funded paid family and medical leave, proponents believe they can get West Virginia Sen. Joe Manchin on board in a compromise deal for President Joe Biden’s costly “Build Back Better” agenda.
CONGRESS & COURTS・19 HOURS AGO
NBC News

WASHINGTON — Democratic Sen. Joe Manchin of West Virginia on Monday suggested there was a path forward to vote on the debt ceiling and avoid what would be the nation's first ever default. "I understand there was an agreement from the Republicans to do a very quick reconciliation by itself...
CONGRESS & COURTS・1 DAY AGO
Markets Insider

Democrats are gambling on a Christmas rush to pass Biden's economic agenda, keep the government from shutting down, and continue paying the country's bills to avoid economic catastrophe

"It will likely take some long nights and weekends," Chuck Schumer said, referring to major bills his party is hoping to pass before the year ends.
PRESIDENTIAL ELECTION・1 DAY AGO
@JohnLocke

Christopher Jacobs of the Federalist wonders why Senate Republicans are playing nice with Democratic colleagues on the federal debt limit. A dozen years ago, I sat in a strategy meeting in an ornate suite in the U.S. Capitol. House Democrats were about to bring to the floor a bill that would raise the deficit by hundreds of billions of dollars, one element of their plan to ram through Obamacare.
CONGRESS & COURTS・1 DAY AGO