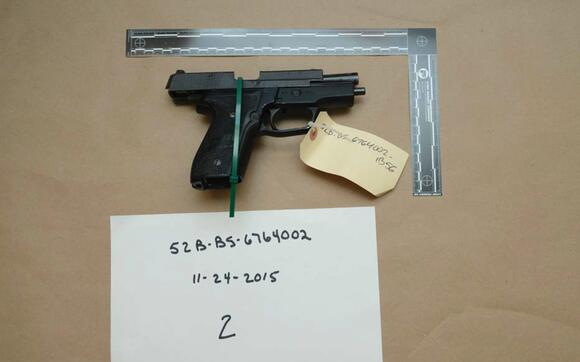 Congress is set to force America’s armed services to keep better track of their guns and explosives, imposing new rules in response to an Associated Press investigation that showed firearms stolen from U.S. bases have resurfaced in violent crimes.

Under the proposals, the Department of Defense would tell both lawmakers and civilian law enforcement authorities more about guns that vanish from military armories, shipments and warehouses.

Overall, AP has found that at least 2,000 firearms from the Army Marines, Navy or Air Force were lost or stolen during the 2010s.

Even as guns kept disappearing, the Department of Defense in recent years stopped advising Congress of most losses or thefts. That was one finding of an investigation which showed how assault rifles, pistols, armor-piercing grenades and other weapons have made their way onto the nation’s streets.

Lawmakers in both the House and Senate responded by writing stricter accountability into each chamber’s version of the National Defense Authorization Act. That bipartisan, must-pass legislation sets policy priorities for the Pentagon.

In coming weeks, lawmakers will hammer out differences between the two defense authorization act versions as the legislation marches toward the president’s desk. For example, the Senate envisions more reporting to the FBI while the House focuses on the Bureau of Alcohol, Tobacco, Firearms and Explosives.

In interviews, military officials have acknowledged numerous problems with how they keep track of weapons through the military’s vast supply chains.

The chairman of the Joint Chiefs of Staff, Gen. Mark Milley told senators in June that he would seek a “systematic fix” within the Department of Defense -- regardless of what Congress did. Spokespeople for the Army and Marines have said their service branches are making changes to how they account for weapons.

Those internal efforts have not persuaded some lawmakers.

“We are concerned that DOD has seemingly not yet developed a coherent strategy to improve its ability to account for military weapons and equipment,” Democratic leaders on the House Committee on Oversight and Reform wrote Defense Secretary Lloyd Austin and the leaders of the service branches in a letter dated Monday.

The lawmakers requested a progress briefing by Nov. 19. Spokespeople for the Army, Marines and Air Force said the branches would respond directly to the committee. The Navy did not comment.

The letter also focused on a technology that some units of the Air Force and Army have used to track guns, but that could let even low-tech enemies detect U.S. troops.

When embedded in military guns, thin radio frequency identification tags — RFID, as the technology is known — can streamline weapon counts and distribution. But field testing for AP showed that, outside armories, the electronic signals the tags emit could become an unwanted tracking beacon from distances greater than some armed services seemed to realize.

The Office of the Secretary of Defense called the tracking potential for enemies a significant security problem, and under questioning the Navy told AP it would abandon the technology in weapons. Still, RFID tags are used in many aspects of military logistics and lawmakers on the committee asked the Pentagon to detail how widely the technology is deployed and to explain the security risks those uses bring.

A former D.C. National Guard official has accused two generals of lying to Congress and attempting to cover up their lack of action in response to the insurrection on Jan. 6, Politico reported on Monday. Col. Earl Matthews, who served in the Trump administration on the National Security Council and in the Pentagon, wrote in a 36-page memo that the Pentagon’s inspector general authored a report with “glaring errors” that paints ” a false narrative” of what happened on Jan. 6. That report, Matthews claimed, was written to protect a leading Army official who postponed the National Guard’s response to the...
CONGRESS & COURTS・12 HOURS AGO
News 8 WROC

The weapons system is clearly designed to evade U.S. missile defenses, although China said it was testing a space vehicle, not a missile.
MILITARY・4 DAYS AGO
Newsweek

'We Are On the Way to a Right-wing Coup,' the CIA Director Privately Warned

In this daily series, Newsweek explores the steps that led to the January 6 Capitol Riot. It was the president's first public appearance since the election—apart from his golf outings. On Veterans Day, November 11, Donald Trump and Vice President Mike Pence attended a wreath-laying ceremony at the Tomb of the Unknown Soldier at Arlington National Ceremony. It was a somber occasion amid a steady rain, shadowed by the president's refusal to concede the election and by his firing of Secretary of Defense Mark Esper so close to a transition.
POTUS・25 DAYS AGO
Business Insider

The projectile, possibly a missile or countermeasure, was reportedly launched midflight inside the atmosphere somewhere over the South China Sea.
MILITARY・14 DAYS AGO

KYIV, Dec 6 (Reuters) - Ukraine's President Volodymyr Zelenskiy on Monday said his armed forces were capable of fighting off any Russian attack, as the country marked its national army day with a display of U.S. armoured vehicles and patrol boats. U.S. President Joe Biden has pledged his "unwavering support"...
MILITARY・8 HOURS AGO
floridianpress.com

Americans were outraged when President Joe Biden called for the hasty retreat of American Military forces out of Afghanistan last August, a move that left 13 American servicemen and women dead, and billions of dollars in military equipment behind. Military leaders and former military members of the U.S. Congress, including...
MILITARY・1 DAY AGO
Nevada Current

Policy, politics and progressive commentary WASHINGTON — As the Senate works to finalize a major annual defense measure, there is a bipartisan push to include a requirement that all young Americans — including women — for the first time register for the military draft. The $777.9 billion measure, the National Defense Authorization Act of 2022, also would allocate millions to cleaning […] The post Women would sign up for the military draft under defense bill in Congress appeared first on Nevada Current.
CONGRESS & COURTS・13 HOURS AGO
Chicago Sun-Times

WASHINGTON — President Joe Biden pledged Friday to make it “very, very difficult” for Russia’s Vladimir Putin to take military action in Ukraine as U.S. intelligence officials determined that Russian planning is underway for a possible military offensive that could begin as soon as early 2022. The new intelligence finding...
MILITARY・2 DAYS AGO

Russian President Vladimir Putin threatened a Russian retaliation if the U.S. or NATO allies cross a “red line” by reinforcing Ukraine by sending certain weapons, such as hypersonic weapons, cruise missiles and missile defense systems, to which he said Russia will match. “If some kind of strike systems appear on...
MILITARY・6 DAYS AGO
New York Post

The second-ranking general in the US military has sounded the alarm about China’s weapons development — warning that Beijing may soon have the capability to launch a surprise nuclear strike against America. “They look like a first-use weapon,” Gen. John Hyten, the vice chairman of the Joint Chiefs of Staff,...
MILITARY・19 DAYS AGO
albuquerqueexpress.com

The US has been reportedly testing the Israeli-made Iron Dome air defense system on the Pacific island of Guam, which hosts the closest American military bases to China. The ongoing tests in Guam are scheduled to continue until December, the Wall Street Journal has reported, without expanding on how successful they've been.
AEROSPACE & DEFENSE・26 DAYS AGO
Washington Post

Benjamin Ginsberg, a veteran Republican election lawyer, just issued a stark warning to lawmakers in his own party: If you don’t act now to protect our system, the losing candidate in the 2024 presidential election might seek to overturn the will of the people — and succeed. Opinions to start...
PRESIDENTIAL ELECTION・11 HOURS AGO

A photo of a billboard insulting the President and Vice President has left the internet divided.
PRESIDENTIAL ELECTION・13 HOURS AGO
thedrive

An Iranian corvette under construction in Bandar Abbas had a major accident, video and satellite imagery confirm. Joseph Trevithick View Joseph Trevithick's Articles. A satellite image confirms that an Iranian naval vessel known as the Talayieh has rolled over in a dry dock in the port of Bandar Abbas on the Persian Gulf. Video had earlier emerged on social media showing this ship lying on its port side in a partially flooded dry dock. Prior to this incident, the Talayieh, seemingly a derivative of the Moudge class corvette design about which there is little publicly available information, was reportedly either in the final stages of construction or fitting out and had been expected to enter service next year.
AEROSPACE & DEFENSE・5 HOURS AGO
WashingtonExaminer

Sen. Amy Klobuchar said 'some pro-choice Republicans' might get on board with codifying Roe v. Wade into law

Sen. Amy Klobuchar suggested codifying abortion rights into law could be the solution to protecting abortion access. Klobuchar said some "pro-choice Republicans" have signaled support for the idea. Her comments come as the US Supreme Court heard arguments last week in a case that could gut Roe v. Wade. Sen....
CONGRESS & COURTS・1 DAY AGO
Newsweek

Mysterious Lights Spotted Over Pittsburgh Have Been Identified

Several residents asked if it was possibly a UFO or even Santa Claus visiting several weeks early.
ASTRONOMY・6 HOURS AGO
realcleardefense.com

Russia has deployed its first regular unit of Terminator combat support tanks. The first Terminator company – equipped with nine BMPT-72s – was assigned to the 90th Guards Tank Division, which is stationed in the Sverdlovsk and Chelyabinsk areas of the Urals region in Central Russia, according to Russian news agency TASS.
MILITARY・2 DAYS AGO
POLITICO

The lawmaker is a prolific fundraiser whose war chest contained nearly $12 million as of the end of September.
CONGRESS & COURTS・2 HOURS AGO