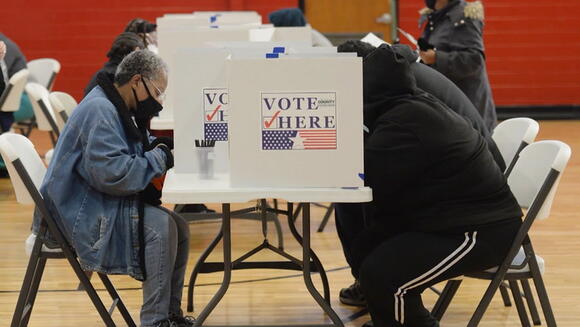 President Joe Biden may be looking to a Republican to head the US government’s future election security efforts, multiple news outlets have reported.

According to the Associated Press, Mr Biden is considering the only GOP official to win a statewide election on the US west coast – Washington Secretary of State Kim Wyman – to lead election security at the Cybersecurity and Infrastructure Security Agency, a division of the Department of Homeland Security .

After Mr Krebs issued a joint statement with members of the US Election Infrastructure Government Coordinating Council (GCC) Executive Committee which called the 2020 election “the most secure in American history” and stated that there was “no evidence that any voting system deleted or lost votes, changed votes, or was in any way compromised,” Mr Trump fired him by way of a tweet.

If chosen for the Cisa elections role, Ms Wyman – who is currently in her third term as Washington state’s top elections official – would report to Cisa Director Jen Easterly and be charged with serving as the Biden administration’s liaison to state governments.

The role would put her squarely in the crosshairs of Mr Trump and his allies, who frequently repeat lies about the election he lost. Since being forced from office when Mr Biden was sworn in on 20 January, the twice-impeached former president has embarked on an effort to replace GOP state election officials who refused to go along with his demand to not certify 2020 election results.

One such state official, Georgia Secretary of State Brad Raffensperger, is now facing a primary challenge from Representative Jody Hice, one of the House members who objected to election results on 6 January, the day a pro-Trump mob stormed the Capitol in hopes of preventing Congress from certifying Mr Biden’s electoral college victory.

In an interview with the Associated Press conducted shortly before the 2020 election, Ms Wyman called herself ““an elections administrator first and foremost,” and contradicted false claims about postal ballots which Mr Trump was making at the time.

“If the president wants to rant and rave about how insecure vote by mail is or how our elections are going to be rigged, then I’m going to talk about the security measures that Washington state put in place and I’m going to spend my time talking about the facts,” she said. “I’m not going to get mired down in some sort of political debate and posturing”.

of course he does. reach across party lines only when it's good for him. doesn't do this voter any good. reach all you want..your a disgrace to this country so why don't you admit it and step down?

Perdue, a former senator who was on the ballot in Georgia with Trump, is running against Republican Gov. Brian Kemp in 2022.
GEORGIA STATE・5 HOURS AGO
CBS 42

The order came in response to a lawsuit from several contractors and seven states.
AUGUSTA, GA・13 HOURS AGO
WKRG News 5

Most Utah voters say Trump should not run again in 2024: poll

A majority of voters in Utah believe that former President Donald Trump should not run again, according to a new poll released on Wednesday.
UTAH STATE・10 HOURS AGO
San Diego Union-Tribune

Colorado's top elections official is asking lawmakers for $200,000 annually for guards and other security-related measures after receiving escalating threats over her advocacy of elections security
PRESIDENTIAL ELECTION・7 HOURS AGO

The big, ugly truth that Biden cannot conceal from the world about the U.S.

When President Biden addresses the international summit on democracy this week, he will face a vexing problem: How can he rally the world’s democracies with our own in such an ailing state?. Biden’s advisers are grappling with this problem. But judging by an illuminating new Politico report on Biden’s...
PRESIDENTIAL ELECTION・9 HOURS AGO
KREX

More voters would back former President Donald Trump than President Joe Biden in a hypothetical match-up if the 2024 election were held today, according to a new Harvard CAPS-Harris Poll survey released exclusively to The Hill.
PRESIDENTIAL ELECTION・1 DAY AGO
Business Insider

Mark Meadows baselessly claimed in his memoir that Biden's 81 million votes in the 2020 election don't constitute "a real number." He parroted Trump's broad and unspecified claims that the election was rigged and stolen. Meadows repeatedly pressured state and national officials to investigate conspiracy theories after the election. Former...
PRESIDENTIAL ELECTION・1 DAY AGO
FOX 23 Tulsa KOKI

WASHINGTON — (AP) — The Senate narrowly approved a resolution Wednesday to nullify the Biden administration's requirement that businesses with 100 or more workers have their employees be vaccinated against the coronavirus or submit to weekly testing. The vote was 52-48. The Democratic-led House is unlikely to take...
CONGRESS & COURTS・17 MINUTES AGO

Disagreeing with Trump, Vernon Jones says he's 'the only candidate' who can defeat Stacey Abrams in Georgia

Georgia gubernatorial candidate Vernon Jones argues that he’s "the future of the Republican Party." Jones is a former Democratic state representative who switched to the GOP last year after serving as a leading Black surrogate and supporter in Georgia of former President Trump’s reelection campaign. In April, he launched what pundits consider a long-shot primary challenge against GOP Gov. Brian Kemp.
GEORGIA STATE・1 DAY AGO
Newsweek

Pence's former chief of staff Marc Short, who was with Pence as he fled while insurrectionists were invading the Capitol, will speak to the House panel.
POTUS・1 DAY AGO
Washington Post

Welcome to The Daily 202! Tell your friends to sign up here. On this day in 1941, wave after wave of Japanese warplanes bombed and strafed American Navy ships and installations at Pearl Harbor in an attack that drew the United States into World War II. President Franklin D. Roosevelt memorably declared it “a date which will live in infamy” as he successfully urged Congress to declare war.
GEORGIA STATE・1 DAY AGO
The Independent

What Joe Biden has said about running in 2024

Joe Biden has repeatedly said he intends to run for re-election when his first term is up in 2024 – but that doesn’t mean a second campaign is guaranteed.To be clear, the president and his team have never equivocated about the chances he will try for a second term. In March, he was asked and gave a straightforward answer: “The answer is yes, my plan is to run for re-election. That’s my expectation.”There was, he conceded, room for other scenarios: “I’m a great respecter of fate. I’ve never been able to plan three-and-a-half years ahead for certain.” But since...
PRESIDENTIAL ELECTION・1 DAY AGO

The Wisconsin Institute for Law & Liberty released the results of their investigation, concluding that there is no evidence of widespread voter fraud.
WISCONSIN STATE・18 HOURS AGO
mediaite.com

Right-wing lawyer John Eastman, who falsely claimed that Congress did not have to certify Joe Biden’s presidential electoral victory, said on Monday that he had to abide by the subpoena he received from Congress. Eastman, according to a recent book by The Washington Post’s Bob Woodward and Robert Costa, wrote...
PRESIDENTIAL ELECTION・1 DAY AGO
AOL Corp

Two high-profile Republican candidates for the U.S. Senate, both of them close to tech entrepreneur Peter Thiel, are supporting an effort to merge former President Donald Trump’s lies about a stolen 2020 election with accusations of meddling against Facebook CEO Mark Zuckerberg. In Arizona, Senate candidate Blake Masters said...
PRESIDENTIAL ELECTION・12 HOURS AGO

Fox News Contributor Lara Trump joins Fox Across America With Jimmy Failla to weigh in on the turmoil in Vice President Kamala Harris’ office and the VP’s treatment of her former employees. Lara discusses why she thinks so many staffers have recently left Harris’ office. She also shares her thoughts...
PRESIDENTIAL ELECTION・1 DAY AGO
Gazette

(Reuters) -A federal judge on Tuesday blocked the last of the Biden administration's COVID-19 vaccine mandates for businesses, saying the government exceeded its authority with a requirement that millions of employees of federal contractors be inoculated. The ruling was the latest setback for President Joe Biden, a Democrat, who announced...
CONGRESS & COURTS・1 DAY AGO
Washington Examiner

Former President Donald Trump wants to burn down the Georgia GOP. Former Sen. David Perdue has decided that he wants to be the tool to do it. Perdue is now challenging Gov. Brian Kemp in the Republican primary for governor. There is no policy question or political difference up for debate here: Perdue’s big selling point is that Trump likes him. He blames Secretary of State Brian Kemp for dividing Georgia and accuses Kemp of fighting Trump by refusing to rig the election in Trump’s favor.
GEORGIA STATE・1 DAY AGO
AFP

President Joe Biden blasted a series of blistering "inappropriate personal attacks" by Republicans targeting his pick to serve as a top banking regulator, as he accepted her withdrawal Tuesday from consideration for the job. Soviet-born Cornell University law professor Saule Omarova had been nominated as comptroller of the currency, a role overseeing two thirds of the US banking system -- or some 1,200 institutions with a combined $14 trillion in assets. She pulled herself from consideration after her nomination was derailed by several Republican senators falsely implying she was a communist, as well as legitimate cross-party concerns about her past pronouncements on banking reform. "As a strong advocate for consumers and a staunch defender of the safety and soundness of our financial system, Saule would have brought invaluable insight and perspective to our important work on behalf of the American people," Biden said in a statement.
PRESIDENTIAL ELECTION・1 DAY AGO