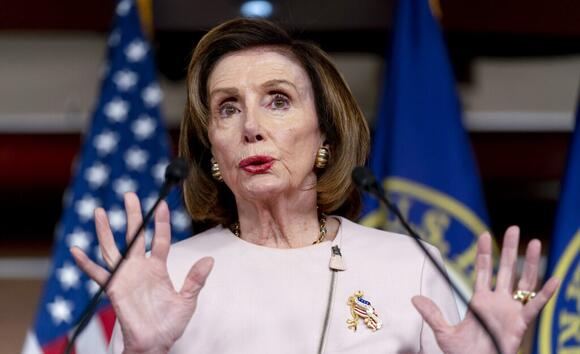 H ouse Democrats say they are "hours" away from agreeing on the framework of a massive social welfare spending deal that has stalled for weeks due to intraparty differences. Speaker Nancy Pelosi and Majority Leader Steny Hoyer told reporters Tuesday an agreement is likely to come later Tuesday or early Wednesday.

The imminent deal comes after weeks of intense negotiations between House and Senate Democrats, party leaders, and the White House — all eager to reach an accord that will allow both bills to pass in the next few weeks.

The spending bill is informally tied to a bipartisan infrastructure package that liberal Democrats have blocked until the social welfare package is secured.

Democrats want a spending framework that would cost less than $2 trillion and be paid for in part with a tax hike impacting billionaires.

The tax hike was modified after centrist Sen. Kyrsten Sinema of Arizona said she would not back hiking corporate taxes from 21% to 26.5%, and fellow centrist Sen. Joe Manchin of West Virginia signaled that a plan to allow the IRS to examine bank accounts could also be scrapped.

Democrats have yet to reach an agreement on what to include in the bill, and there is still no written language on the tax hikes.

For example, an initial plan to provide paid family and medical leave has divided Democrats and could be scrapped, or at least shortened from the 12 weeks some lawmakers hoped the bill would provide.

House Democrats met privately on Tuesday morning to talk in more detail about the emerging deal.

“These bills are coming very close to being realized as the policies of the United States of America that the president can sign into law,” said Hoyer, a Maryland Democrat, on Tuesday.

Pelosi, a California Democrat, told reporters “90%” of the legislation is already written.

“There's not that much more time,” Pelosi told reporters. “We have to have decisions largely today or a little bit into tomorrow, so we can proceed.”

The House is racing against an Oct. 31 deadline, when a stopgap provision funding highway projects will expire.

Hoyer said the House aimed to take up the infrastructure package, which includes the highway funding, and he anticipates liberal Democrats will support the plan even if it means waiting to pass the social welfare spending deal.

On Nov. 19, the House passed the 1,664-page Build Back Better Act with a 220-213 vote. One of the most extensive social spending bills in history, the administration and Democrats say it has a price tag totaling $1.7 trillion. Other estimates put the figure anywhere between $2.2 trillion and $2.5 trillion.
CONGRESS & COURTS・19 HOURS AGO
WashingtonExaminer

The House on Thursday voted to pass a short-term spending bill to fund the government through mid-February, as lawmakers work quickly to avert a shutdown on Friday.
CONGRESS & COURTS・23 HOURS AGO

This article is part of the The DC Brief, TIME’s politics newsletter. Sign up here to get stories like this sent to your inbox every weekday. Welcome to Washington, currently home to an octogenarian staring contest that will determine whether the military will stand ready, inspectors will check the food heading to holiday tables and families shuffle through busy airports with TSA screeners working with pay—or not.
CONGRESS & COURTS・2 DAYS AGO
POLITICO

House Majority Leader Steny Hoyer argued during a closed-door meeting late Tuesday that House Democrats need to bring a funding patch to the floor on Wednesday, with or without the bipartisan blessing of their Senate counterparts.
CONGRESS & COURTS・2 DAYS AGO
Fox News

Rep. Eddie Bernice Johnson, the 85-year-old Texas Democrat, who recently announced that she will not seek reelection, said in an interview that party infighting over President Biden’s social spending bill contributed to her decision. Johnson told CBS DFW on Tuesday that the decision was not easy and some leaders were...
TEXAS STATE・7 DAYS AGO
The Northeast Mississippi Daily Journal

Eight months after triggering inflation with his $1.9 trillion stimulus bill, President Biden is now ordering up round two with his reckless tax-and-spending proposal. The 2,135-page proposal would raise taxes on millions of Americans, inject our economy with $200 billion of inflationary spending next year and add $800 billion to the national debt by 2026. Although it is being advertised as costing $1.7 trillion, more honest estimates put the price tag near $4 trillion — two-thirds the size of the entire federal budget.
BUSINESS・11 DAYS AGO

Instead of giving the American people gifts for Christmas this year, House Democrats are giving us a bill for all of their reckless spending. The House is poised to vote on Biden’s $1.75 trillion Build Back Better Agenda in the next week. As the pork-filled bipartisan infrastructure bill passed through...
CONGRESS & COURTS・11 DAYS AGO
The Fiscal Times

President Joe Biden and his fellow Democrats took a big step toward enacting their economic agenda on Friday morning as the House narrowly approved the $1.7 trillion Build Back Better Act, the party’s sweeping package of climate, education and health care programs financed by higher taxes on some corporations and top-earning individuals.
PRESIDENTIAL ELECTION・13 DAYS AGO
Times-Herald

Earlier this month, Rep. Tom Reed was subjected to partisan anger and even threats after he joined a handful of House Republicans to vote for the Democrats’ $1.2 trillion infrastructure bill. On Friday Reed, the Corning congressman who will not seek re-election in 2022, voted against President Joe Biden’s roughly...
PRESIDENTIAL ELECTION・13 DAYS AGO
wearebreakingnews.com

(CNN) – House Democrats are about to pass President Joe Biden’s comprehensive social spending and climate change bill after months of bickering. But Friday’s likely victory will only raise new questions about whether the $ 1.9 trillion measure can outlive the Senate and then deliver the short-term jolt of political energy that Biden’s reeling presidency needs.
CONGRESS & COURTS・14 DAYS AGO

WASHINGTON (SBG) - The House passed President Joe Biden’s $1.9 trillion Build Back Better Act in a vote of 220 to 231 Friday morning. The bill must now go to the Senate, where all 50 members of the Senate Democratic caucus must support it to pass. “There's very little that...
CONGRESS & COURTS・14 DAYS AGO
WashingtonExaminer

The Congressional Budget Office said on Thursday that the House Democratic version of President Joe Biden's climate and social spending legislation would increase federal deficits by $367 billion over the next decade.
CONGRESS & COURTS・15 DAYS AGO
MSNBC

On the surface, Congress was able to avoid a government shutdown with relatively little drama this week. Facing an inflexible deadline, Democratic and Republican leaders gradually worked toward a solution, confident that an ill-timed crisis would be avoided when all was said and done. With this in mind, the Democratic-led...
PRESIDENTIAL ELECTION・10 HOURS AGO
Dallas News

WASHINGTON — Congress struck a deal Thursday night to keep the government open through February, after overcoming a threat from Sen. Ted Cruz and a few allies to force a shutdown unless funds for a vaccine mandate were cut off. Federal courts have blocked the mandate, which is aimed at...
CONGRESS & COURTS・21 HOURS AGO

Sen. Rand Paul, R-Ky., told "Mornings with Maria" Thursday that the Democrats’ spending bill is "bankrupting" our country, after Republicans threatened a government shutdown over the party’s vaccine mandates if the legislation doesn’t pass. RAND PAUL: When we passed the last spending bill in September, we knew this date was...
CONGRESS & COURTS・1 DAY AGO
@JohnLocke

Christian Datoc of the Washington Examiner highlights the impact of inflation fears on support for the Democrats’ big-spending proposals on Capitol Hill. Inflation concerns continue to hamper President Joe Biden and his economic agenda, even as the White House is coming off one of its most successful weeks of his first year in office.
BUSINESS・9 DAYS AGO
Fox News

House Speaker Nancy Pelosi appeared to say House Democrats won't vote for a continuing resolution that includes a provision blocking any funding to enforce federal COVID-19 vaccine mandates, as Congress inches closer to a government shutdown just before midnight Friday night,. "We're not going to go for their anti-vaxxing. So...
CONGRESS & COURTS・1 DAY AGO
WCIA

The Senate passed a stopgap spending bill Thursday that avoids a short-term shutdown and funds the federal government through Feb. 18 after leaders defused a partisan standoff over federal vaccine mandates. The measure now goes to President Joe Biden to be signed into law.
CONGRESS & COURTS・20 HOURS AGO