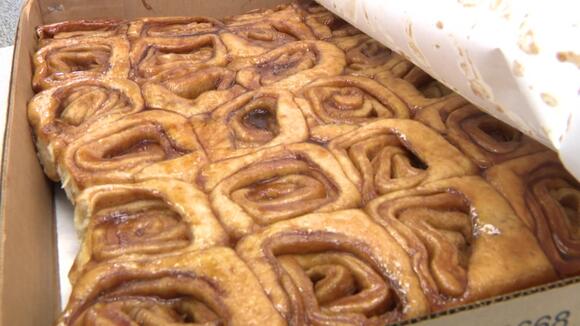 The famous farm has reopened for the season.

To say the farm is popular is an understatement. During the season, folks drive from miles around to get their fresh baked items at the Homestead spot at 15980 SW 248th Street.

Adrian Gonzalez said he waited overnight for it to open. He got there Monday night at 10:30 p.m.

“It’s a tradition of mine to come out, get the cinnamon rolls,” he said. 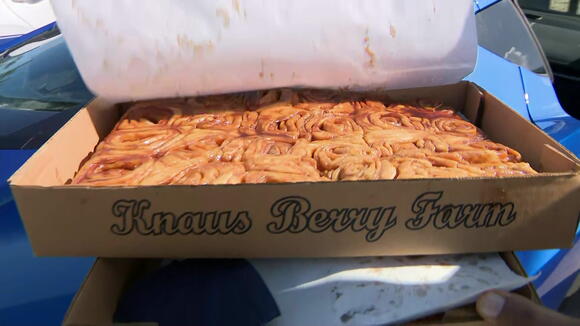 Those famous cinnamon rolls had plenty of people waiting in line. Some waited overnight, like Gonzalez, while others got up early and waited for hours in the sun.

“I just ordered the sticky buns. I got six of them, six dozen,” she said.

Knaus Berry Farm is entered on the National Culinary Heritage Register , which lists the country’s most enduring food destinations.

She now owns it with her sister, Susan, and their husbands.

“It’s kinda wild, we just try to get through the day,” she said.

In addition to their famous and delicious cinnamon rolls, Knaus Berry Farm is also known for its delicious milkshakes, smoothies, pies, and strawberries, among other things. But it’s the cinnamon rolls that are a fan favorite.

As many as they can for a community hungry for the food and the tradition.

“This is something that to me holds a lot of fond memories, those are the memories we want to hold on to,” said Gonzalez.

The farm always closes for the summer and reopens at the end of October.

The self-pick strawberry field should be ready in December.

Before you go, remember that Knaus only accepts cash and is closed on Sundays. The farm is also closed on Thanksgiving Day, Christmas Day, and New Year’s Day.

Firefighters gained greater control on Sunday of a wildfire that closed northern California’s scenic coastal highway and threatened a famous bridge, although about 500 people stayed under evacuation orders, officials said. The so-called Colorado Fire, about 15 miles south of Monterey and just north of the area known as...
MONTEREY, CA・3 HOURS AGO
NBC News

Britain’s accusation that the Kremlin is seeking to install a pro-Russian regime in Ukraine is “deeply concerning,” a National Security Council spokesperson said late Saturday. “The Ukrainian people have the sovereign right to determine their own future, and we stand with our democratically-elected partners in Ukraine,” Emily...
FOREIGN POLICY・23 HOURS AGO

New Zealand Prime Minister Jacinda Ardern on Sunday canceled her upcoming wedding plans due to a recent spike in COVID-19 cases and tightened restrictions. "Such is life," she said when asked by reporters about how she felt about the cancellation, according to Reuters. "I am no different to, dare I...
PUBLIC HEALTH・17 HOURS AGO
ABC News

Sen. Kyrsten Sinema is hemorrhaging support from Democrats in her home state after blocking the advancement of voting rights legislation.
ARIZONA STATE・1 DAY AGO
ABC News

It's the largest such sortie of the new year, continuing a pattern of threat.
AEROSPACE & DEFENSE・4 HOURS AGO
CBS News

"Horrific": Six found dead in Milwaukee home and police suspect all were homicides

Six people were found dead in a Milwaukee home Sunday in what police are investigating as multiple homicides, according to the Milwaukee County Medical Examiner's office. At first, five bodies were discovered. The ME's office later tweeted that a sixth had been spotted. Milwaukee Police responded about 3:45 p.m. Sunday...
MILWAUKEE, WI・2 HOURS AGO

In a never-say-die showdown between two of the NFL's top teams, and two of its bright young quarterbacks, the Bills and Chiefs played a classic Sunday night decided by one of them calling tails and the other making him pay for it. Josh Allen's decision on the overtime coin toss...
NFL・2 HOURS AGO
CNN

French fashion designer Thierry Mugler, whose flamboyant creations transformed haute couture, has died at the age of 73, according to a message posted to his official Instagram account. "We are devastated to announce the passing of Mr. Manfred Thierry Mugler on Sunday January 23rd 2022," the post read, using his...
DESIGNERS & COLLECTIONS・12 HOURS AGO