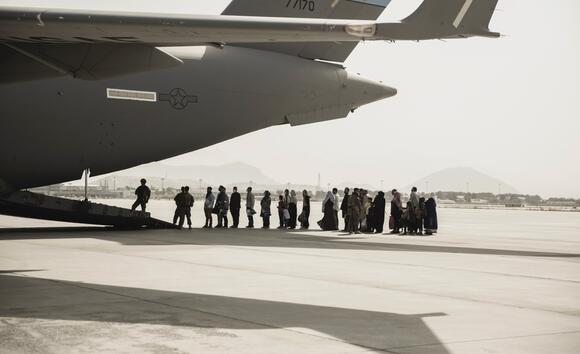 The number of Americans and Special Immigrant Visa applicants still in Afghanistan is higher than previously released information indicated, according to one Defense Department official.

While Biden administration officials have said that the number of Americans in Afghanistan following the military's withdrawal was between 100 and 200 , Colin H. Kahl, the undersecretary of defense for policy, told the Senate Armed Services Committee on Tuesday that the number is closer to 450.

AFTER THE US MILITARY EVACUATIONS STOPPED, THIS GROUP GOT AN 80-YEAR-OLD GRANDMOTHER OUT OF AFGHANISTAN

Kahl later explained that there are roughly 28,000 SIV applications, which are granted to foreign allies who worked alongside U.S. forces, "in the pipeline," though he noted that less than a third of the applicants have gotten out of Afghanistan with their families.

"The total number of SIVs in the pipeline is 28,000, according to our records, of which 8,555 have come out with their family members," he added. "So that would suggest there's a significant number of SIVs still in Afghanistan."

A spokesperson for the National Security Council pointed the Washington Examiner to Secretary of State Antony Blinken’s Aug. 30 remarks to explain why the number of Americans who want to leave fluctuates.

“ Part of the challenge with fixing a precise number is that there are longtime residents of Afghanistan who have American passports and who are trying to determine whether or not they wanted to leave,” Blinken said. “Many are dual citizen Americans with deep roots and extended families in Afghanistan who resided there for many years. For many, it’s a painful choice. Our commitment to them and to all Americans in Afghanistan and everywhere in the world continues.”

Some evacuees may be working through the application process after getting evacuated from Afghanistan.

The undersecretary also told the committee that the U.S. government has "directly facilitated" the departure of 240 U.S. citizens and 157 lawful permanent residents, which on its own eclipses the previous number given out by Biden administration officials after the Aug. 31 withdrawal .

Kahl repeatedly insisted that the United States did not leave people behind in Afghanistan, a frequent line of criticism from GOP members of the committee.

International officials have expressed concern about the risks if Afghanistan's financial systems continue on their path to collapse.
WORLD・14 DAYS AGO
WashingtonExaminer

THE TWIN CHALLENGE: At a weekend appearance at the Reagan Defense Forum in Simi Valley, California, Defense Secretary Lloyd Austin offered vague promises of U.S. military assistance to Ukraine and Taiwan while stopping short of specifying what the U.S. would do if either country is invaded.
WASHINGTON, DC・13 HOURS AGO
WashingtonExaminer

(Washington, DC) — New U.S. intelligence is estimating Russia could begin a military offensive in Ukraine in a matter of months as it builds up to 175-thousand troops along the border. President Biden has warned that the startling escalation could have severe consequences. The latest information comes after months of steady increases along the Russia-Ukraine divide. The buildup has alarmed Western countries, including the United States and has led to tense conversations between American diplomats and foreign envoys. CNN has reported that Russian forces have capabilities in place along the Ukraine border to carry out a swift and immediate invasion.
FOREIGN POLICY・16 HOURS AGO

How many Americans are left in Afghanistan?

WASHINGTON (SBG) - The situation in Afghanistan is “very desperate” as ISIS has reportedly taken over every province and Americans at home continue to work to get U.S. citizens and allies out of the country. "There are a lot of factors that are really going against the people of Afghanistan...
BUSINESS・14 DAYS AGO
floridianpress.com

Americans were outraged when President Joe Biden called for the hasty retreat of American Military forces out of Afghanistan last August, a move that left 13 American servicemen and women dead, and billions of dollars in military equipment behind. Military leaders and former military members of the U.S. Congress, including...
MILITARY・1 DAY AGO
WashingtonExaminer

A former Washington, D.C., National Guard official said two high-ranking generals lied to Congress about their roles in delaying the deployment of the National Guard during the Jan. 6 riot at the Capitol.
WASHINGTON, DC・5 HOURS AGO
SFGate

KABUL, Afghanistan (AP) — Afghanistan is being hit by multiple crises that are “progressively getting worse,” with drought, economic collapse and displacement all pushing the population into catastrophic hunger, a senior international aid official said Thursday. The onset of winter will only increase the pain for Afghans and drive some...
ADVOCACY・4 DAYS AGO

INDIANAPOLIS – Among the people still trying to flee Afghanistan are family members of Hoosiers, and some of Indiana’s elected officials are doing what they can to help. “I do fear for their lives,” said Tim Siddiq, an Indianapolis business owner who fled Afghanistan decades ago. Siddiq and his brother Sharif have been trying to […]
INDIANA STATE・7 DAYS AGO
Washington Post

Benjamin Ginsberg, a veteran Republican election lawyer, just issued a stark warning to lawmakers in his own party: If you don’t act now to protect our system, the losing candidate in the 2024 presidential election might seek to overturn the will of the people — and succeed. Opinions to start...
PRESIDENTIAL ELECTION・10 HOURS AGO
americanmilitarynews.com

This article was originally published by Radio Free Asia and is reprinted with permission. Local governments in North Korea are scrambling to make candies in preparation for a nationwide celebration of leader Kim Jong Un’s birthday in January, but the government is forcing hungry citizens to pay for it, sources in the country told RFA.
POLITICS・14 HOURS AGO
Newsweek

A photo of a billboard insulting the President and Vice President has left the internet divided.
PRESIDENTIAL ELECTION・13 HOURS AGO

An Iranian corvette under construction in Bandar Abbas had a major accident, video and satellite imagery confirm. Joseph Trevithick View Joseph Trevithick's Articles. A satellite image confirms that an Iranian naval vessel known as the Talayieh has rolled over in a dry dock in the port of Bandar Abbas on the Persian Gulf. Video had earlier emerged on social media showing this ship lying on its port side in a partially flooded dry dock. Prior to this incident, the Talayieh, seemingly a derivative of the Moudge class corvette design about which there is little publicly available information, was reportedly either in the final stages of construction or fitting out and had been expected to enter service next year.
AEROSPACE & DEFENSE・4 HOURS AGO
iHeartRadio

Mysterious Lights Spotted Over Pittsburgh Have Been Identified

Several residents asked if it was possibly a UFO or even Santa Claus visiting several weeks early.
ASTRONOMY・5 HOURS AGO
WashingtonExaminer

California Republican Rep. Devin Nunes, ranking member on the House Intelligence Committee, will exit Congress at the end of the year to work for former President Donald Trump's new media company, sources confirmed to the Washington Examiner.
WASHINGTON, DC・4 HOURS AGO
The Guardian

In remarks to diners at his Mar-a-Lago resort in Florida on Saturday night, Donald Trump called the American media “crooked bastards” and Gen Mark Milley, the chairman of the joint chiefs of staff, a “fucking idiot”. The meandering, foul-mouthed speech to Turning Point USA, a group for young conservatives, was...
POTUS・20 HOURS AGO
Washington Post

Brigadier General Amir Vadmani, head of the Planning and Personnel Management Division in the IDF’s Human Resources Dept., on Monday told the Knesset Foreign Affairs and Defense Committee that more than 20 “minority” soldiers (the term is a common reference to Druse, Bedouin, and Arabs) refused an order or were AWOL absent from service during Operation Guardian of the Walls, May 6 to 21, 2021. Seven of them were discharged from the army following interviews with their commanders. The news was originally tweeted by Yosi Yehoshua, a military correspondent for Yedioth Aharonoth.
MILITARY・12 HOURS AGO