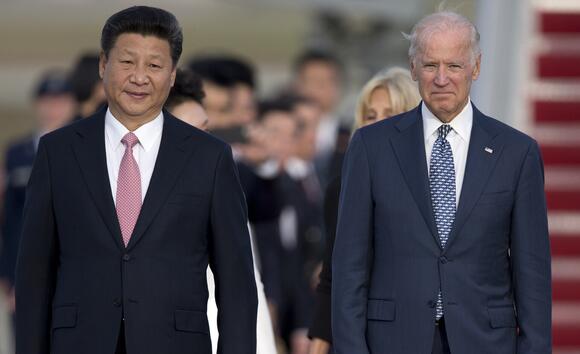 President Joe Biden will speak one-on-one with Chinese President Xi Jinping virtually before the end of the year, according to the White House's top national security expert.

But there is no date for the digital conversation with Jinping, who will not attend the G-20 and United Nations climate summits in person, national security adviser Jake Sullivan told reporters Tuesday.

BIDEN'S DEMOCRAT VS. AUTOCRAT MESSAGE TO BE TESTED AT G-20 IN ROME

The two world leaders will "be able to sit as close to face-to-face as technology allows to see one another and spend a significant amount of time going over the full agenda," Sullivan said.

Xi has not left China throughout the COVID-19 pandemic, with Sullivan noting that was "largely" his reason for skipping the multilateral summits. Russian President Vladimir Putin is also not scheduled to attend either gathering in person.

Biden's priorities for the G-20 include securing a global minimum tax agreement, Sullivan said in his preview of the president's trip to Italy and Scotland for the G-20 and 26th Conference of the Parties to the U.N. Framework Convention on Climate Change, respectively. Another is to ensure “a united front" against Iran's nuclear proliferation, though Sullivan added U.S. patience is not unlimited.

“We believe there still is an opportunity to resolve this diplomatically," he said.

"I think you've got a sophisticated set of world leaders who understand politics in their own country," he said.

Sullivan declined to confirm whether the press would have access to Biden's fourth audience with Pope Francis in Rome. But he did say Biden would have his first in-person meeting with French President Emmanuel Macron on the sidelines of the G-20 Friday, coming one month after the diplomatic flap caused by his new national security alliance with the United Kingdom and Australia.

Biden departs for Rome on Thursday, where he and first lady Jill Biden will visit the pope on Friday. Biden will attend the G-20 summit on Saturday and Sunday before flying to Glasgow on Monday for the climate gathering. The environment talks wrap up on Nov. 2, with the president returning to the White House Nov. 3.

Iran nuclear deal negotiations resume Monday after five months, but experts warn the United States is on even weaker footing than before after the deadly withdrawal of troops from Afghanistan and unanswered proxy attacks on military assets.
POTUS・21 HOURS AGO
WashingtonExaminer

President Joe Biden’s nominee to run the Export-Import Bank is the second official he has picked to help compete with China who also serves as a strategic adviser for a group that advocates for more U.S.-China investment and has repeatedly partnered with organizations linked to the Chinese Communist Party.
PRESIDENTIAL ELECTION・12 HOURS AGO
The Guardian

President Joe Biden is in a bit of a pickle. On the one hand, voters have a well-established history of punishing presidents and their respective political parties when the price of gas goes up. On the other hand, Biden and his climate-alarmist allies actually do want the price of gas to go up.
PRESIDENTIAL ELECTION・4 HOURS AGO
AFP

A rare joint opinion article by the ambassadors of China and Russia has sharply assailed President Joe Biden's plans for a virtual summit of democratic countries -- from which they were pointedly excluded. Calling the US plan "an evident product of its Cold-War mentality," ambassadors Anatoly Antonov of Russia and Qin Gang of China said the December 9-10 event would "stoke up ideological confrontation and a rift in the world, creating new 'dividing lines.'" The summit is meant to fulfill a campaign pledge by Biden to advance the cause of global democracy at a time when autocratic governments have been on the rise. But when the State Department on Tuesday published a list of about 110 invited countries -- without including Russia or China -- their reaction was furious.
FOREIGN POLICY・14 HOURS AGO
The Independent

US President Joe Biden was seemingly blamed by Fox & Friends hosts for the discovery of a new Covid variant after the US introduced travel bans on several southern African countries. As the hosts of Fox and Friends pointed out on Saturday, lockdown measures – despite not being introduced by the federal government – were a reason behind the current supply chain crisis and a rising cost of living that was starting to be felt by US consumers. Pete Buttigieg, the US transportation secretary, also said in recent days that the US “can’t fix the supply...
PRESIDENTIAL ELECTION・1 DAY AGO
WashingtonExaminer

A Moldovan-born artist is making waves in the New York art scene with her collection of paintings titled "Trump: Parallel Universe,” depicting the former president in all sorts of scenarios.
NEW YORK CITY, NY・1 DAY AGO

The president plans to take action against omicron "not with shutdowns or lockdowns, but with more widespread vaccinations, boosters, testing and more."
U.S. POLITICS・14 HOURS AGO
Daily Montanan

WASHINGTON — Nearly 100 House Democrats are pushing the Senate to expand immigration protections in President Joe Biden’s massive social spending and climate bill, and advocates say that it may be a last opportunity for years to advance any reform. The letter to Senate Majority Leader Chuck Schumer of New York and the chairman of the Judiciary […] The post Biden’s immigration plans face new test in the U.S. Senate appeared first on Daily Montanan.
FOREIGN POLICY・1 DAY AGO
Los Angeles Times

The biggest foreign policy challenge for President Biden is coming not from Asia, but from a more traditional nemesis, Russia's Vladimir Putin.
LOS ANGELES, CA・1 DAY AGO
WTKR News 3

President Joe Biden is set to deliver remarks on the emergence of the omicron variant Monday morning.
PRESIDENTIAL ELECTION・20 HOURS AGO

The Peoples Republic of China increases Chinese hypersonic missiles to deter the US and its allies in the Indo-Pacific. As these deterrents go, these weapons could turn the tide in Beijing's favor. But the mainland government said they would not use nukes first and wanted assurance from Washington if they...
MILITARY・2 DAYS AGO
Reuters

BEIJING, Nov 29 (Reuters) - China does not plan to invite Western politicians who threaten a diplomatic boycott to the Beijing Winter Olympics, Chinese state media said on Monday, after U.S. President Joe Biden and Britain's Prime Minister Boris Johnson said their countries might limit an official presence at the Games.
CHINA・1 DAY AGO
POLITICO

'Nobody' in Biden's West Wing is shutting down chatter of Buttigieg as a potential presidential successor: report

Buttigieg is being openly discussed a potential Biden successor in the West Wing, per Politico. Some staffers of color feel that the chatter is a slight to Vice President Harris, per the report. Buttigieg this week on NBC's "Meet the Press" emphasized his strong work relationship with Harris. When Pete...
PRESIDENTIAL ELECTION・2 DAYS AGO

All options fraught with risk as Biden confronts Putin over Ukraine

At a virtual summit, Xi Jinping reminds Joe Biden that China and the US must respect and coexist.

During a virtual meeting on Tuesday, Chinese President Xi Jinping urged his US counterpart Joe Biden that China and the US should respect each other, coexist peacefully, and promote win-win cooperation. During his speech at the summit, Xi emphasised the importance of building a strong and stable China-US relationship, and...
U.S. POLITICS・14 DAYS AGO
CBS News

President Biden held a highly anticipated virtual summit with Chinese President Xi Jinping amid economic and military tension between the two countries. The critical talks went on longer than expected after substantial back and forth. Ed O'Keefe has the latest on the high-stakes meeting.
FOREIGN POLICY・13 DAYS AGO
CBS News