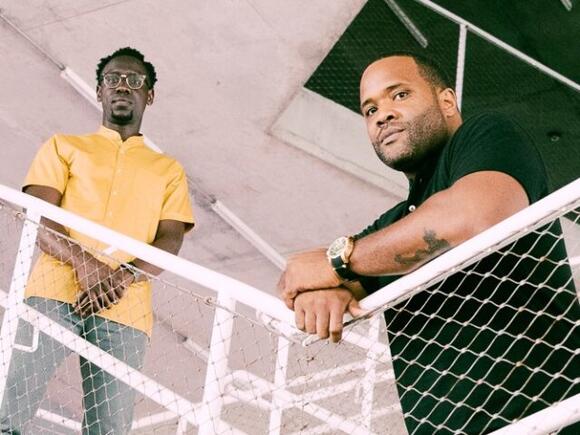 INDIANAPOLIS — Beethoven and Black Thought. Dvorak and Dr. Dre. Ellington and Easy E. When Black Violin takes the stage, you're likely to hear all that and more.

You say you haven't heard of Black Violin? Maybe you had just forgotten about their performance with Alicia Keys at the 2004 Grammy awards that helped launch their careers, or their star turn at the Kids' Inaugural Ball after President Barack Obama's re-election.

Black Violin — which will perform at 7:30 p.m. Thursday at Clowes Memorial Hall — is actually two stringed instruments: violin played by Kev Marcus and viola played by Wil B, who also sings. Well, it's them plus drummer Nat Stokes and DJ SPS.

"We are classically trained. We're playing classical music as naturally as a violinist. We're not sliding to the note, we're very classical in our approach," Marcus said during a timeout of Black Violin's tour supporting their latest album.

"What we're playing on top of is the same type of record that Drake would play on, or Taylor Swift. It's the same format as popular music is today."

Kev and Wil first met in their hometown of Fort Lauderdale, Florida almost two decades ago.

They long put aside the notion that "classical" music can't be "popular," and they proved it again when their latest album "Take the Stairs" was nominated for a Grammy for Best Contemporary Instrumental Album.

"Whereas the classical enthusiast will come to our show, and they'll close their eyes and they'll just be listening to the strings, they'll be next to a little kid who's like 'aw, that beat is fire,'" Marcus said. "That's basically what we're trying to do. We do it in a way without being disrespectful to either genre."

Most young people who are interested in music gravitate to the guitar, the turntable or maybe a horn or keyboard. Marcus got a little push toward his instrument of choice.

"My mother made me play the violin," he said with a laugh. "Once I learned how to make it sound like something, what drew me to it is that it mimicked the human voice in a way unlike other instruments."

Marcus believes that's why the violin and other stringed instruments touch people emotionally, particularly when they hit that one special note that can grab the listener by the heart.

"The expression you can get is unlike anything else," he said.

Tickets are available for Thursday's performance at Clowes Memorial Hall through Ticketmaster .

BestReviews is reader-supported and may earn an affiliate commission. Details. Wanting to learn how to play a musical instrument can be tough. There are thousands of instruments to choose from, but most tend to gravitate towards guitars, piano or drums. If you enjoy classical music or orchestral sounds, you might want to pick up the violin.
RETAIL・12 DAYS AGO
jacksonvillefreepress.com

The Grammy-nominated, classically trained strings virtuoso’sknown as “Black Violin” will perform Tuesday at the Florida Theater Jacksonville kicking off their national “Give Thanks” holiday tour. Black Violin is hailed by many as exceptional masters of the strings – the violin and viola but with a sound that is uniquely their own.
JACKSONVILLE, FL・10 DAYS AGO
whopam.com

You won’t want to miss Black Violin perform LIVE at the Alhambra Theatre on Friday February 4th, 2022! Doors at 6:00 PM ….Show at 7:00 PM. Black Violin is lead by classically trained string players Wil B. (viola) and Kev Marcus(violin). Joining them onstage are DJ SPS and drummer Nat Stokes. The band uses their unique blend of classical and hip-hop music, often described as “classical boom,” to overcome stereotypes and encourage people of all ages, races, and economic backgrounds to join together to break down cultural barriers. Black Violin released their latest studio album, Take the Stairs, on November 1, 2019.
MUSIC・8 DAYS AGO
classical-music.com

Violin Concertos, Vol. 7: Overture-Suites in A, TWV 55:A8 & TWV 55:A4; Violin Concerto in G, TWV 51:G4. The Wallfisch Band/Elizabeth Wallfisch (violin) After an interim of five years comes Volume 7 of Elizabeth Wallfisch’s excellent survey of Telemann’s violin concertos. Wallfisch evidently is leaving no stone unturned since, as enthusiasts for the series already will know, she has been including not only the violin concertos but also the ouverture-suites that feature a solo violin and, in a single instance, one of Telemann’s handful of concertos for two violins. I hope this is not the final instalment, since there is still enough material for at least one further disc in which one or two violins play a prominent part.
THEATER & DANCE・13 DAYS AGO

LOS ANGELES — The LA Philharmonic continues its tradition of commissioning new works from modern day composers, premiering a new violin concerto from Julia Adolphe. The LA Phil commissioned Adolphe back in 2018, and now she has returned to the Walt Disney Concert Hall with a new violin concerto called "Woven Loom, Silver Spindle."
LOS ANGELES, CA・6 DAYS AGO
The Providence Journal

Black Violin will give hip-hop a classical spin in Dec. 9 show in Providence

The violin was mainly associated with classical, folk and bluegrass music until the Fort Lauderdale duo of Kev Marcus and Wil B. broke new ground by incorporating hip-hop elements when they formed Black Violin in 2004. Their artistic innovation has garnered them a Grammy nomination, two sold-out shows with the National Symphony Orchestra at Washington, D.C.'s John...
PROVIDENCE, RI・5 DAYS AGO
soundandvision.com

One could argue that Beethoven's 9th symphony represents the very pinnacle of Western culture. Since then, has any other artist produced a work that equaled its restless and joyful expression? How could even Beethoven himself have improved on its perfection? After the 9th, would he have even dared to write another symphony? Well, yes, he would. And that brings us to the question of Beethoven's 10th symphony.
MUSIC・2 DAYS AGO
Metro active

2020 would have been Beethoven’s 250th birthday, but real heads are celebrating his 251st (ok, COVID got a little in the way last year). This weekend, internationally renowned conductor John Nelson will lead the Symphony in two performances in their salute to the maestro and showcasing his signature work. Performances will include Leonore Overture No. 3, Piano Concerto No. 4 and Symphony No. 5, with a special piano solo by native Californian Jon Nakamatsu. The team will emphasize Beethoven’s world-reach, incorporating his embodiment to the major and the minor through his signature work. Now for the real question: will there be a birthday cake?
SAN JOSE, CA・7 DAYS AGO

Robbie Shakespeare, a record producer and acclaimed bassist of the Jamaican duo Sly and Robbie, has died. He was 68. It had been reported by The Jamaica Gleaner that the musician had recently undergone surgery related to his kidneys. He was living in a hospital in Florida before his death. News of Shakespeare’s death was also shared by Jamaica’s Ministry of Culture, Gender, Entertainment and Sport on its official Twitter. “Minister [Olivia] Grange [is] saddened by the passing of the legendary bassist Robbie Shakespeare,” reads the ministry’s official statement. “Robbie’s loss will be felt by the industry at home and abroad. He will be...
MUSIC・2 HOURS AGO
Wellsville Daily Reporter

The Top 10 greatest, most heart-warming Christmas songs of all time: Listen

Nothing pulls at the heartstrings like a Christmas song. The best, and most heart-warming, Christmas songs have been recorded and released around the time of conflict in the 20th century. Specifically, World War II and the Vietnam War. The holiday season is the call of home, the call of family...
MUSIC・7 DAYS AGO
classical-music.com

Haydn: Violin Concertos Nos 1 & 4; Stravinsky: Divertimento from The Fairy’s Kiss (arr. D Ledger) Vondel Strings/Rosanne Philippens (violin) Hoboken’s catalogue credits Haydn with four violin concertos, all of them dating from the 1760s when he was in his early 30s – though the score of No. 2 is lost and No. 4 in G major, Hob. VIIa:4, may just possibly be by someone else. Yet it certainly sounds like a dry run for the more virtuosic No. 1 in C major. Hob. VIIa:1 composed for Haydn’s lead violinist at Eszterháza, Luigi Tomasini. Both works mix lingering formalities of the late Baroque with more dynamic premonitions of Viennese Classicism. But while solo writing in the G major Concerto stays closely interwoven with the orchestra, rarely taking flight, the C major Concerto is more brilliantly written, with a lovely nocturnal cantilena in the slow movement and a witty play of irregular phrase-lengths in the finale.
MUSIC・13 DAYS AGO
classicfm.com

This absolutely crucial typo in a Beethoven book changes everything

A few years ago, baroque and classical violinist Polly Smith was reading a text about great German composer Ludwig van Beethoven. During her eagle-eyed reading she spotted a small, yet very significant typo. The line in the book was supposed to read: ‘Being deaf did not stop him in the...
BOOKS & LITERATURE・13 DAYS AGO

Long a staple of the holidays in Boston, Langston Hughes’ “Black Nativity” came to Mechanics Hall on Saturday afternoon, courtesy of the National Center of Afro-American Artists. Essentially a retelling of the story of Jesus’ birth, Hughes labeled this 1961 effort a “gospel song-play.” It’s that and then some. As...
RELIGION・10 DAYS AGO
940wfaw.com

Saturday (December 4th) marks what would've been the 77th birthday of Beach Boys co-founder and drummer Dennis Wilson. For most of his life, Dennis was overshadowed by his older brother Brian, who wrote most of the group's hits, and by his younger brother Carl, who sang lead on songs such as “God Only Knows” and “Good Vibrations.” As a youngster, Dennis was considered the least musical of the Wilson brothers, but it was his idea for Brian and cousin Mike Love to first write about surfing which resulted in their 1961 debut single “Surfin'.” It was the Wilson's mother Audree who urged the group to include Dennis, who was then forced to play drums because, according to legend, he couldn't play anything else.
MUSIC・6 DAYS AGO
Daily Breeze

The Violins of Hope had just arrived in Southern California in March 2020 when the coronavirus pandemic shut down a planned series of concerts and educational events, culminating in two Long Beach concerts. They’re back. Violins of Hope is a collection of instruments played by Jewish musicians before and during...
LONG BEACH, CA・8 DAYS AGO
outliermedia.org

Pause to Reflect: A violin performance with Pretty Stringz

In the spirit of gratitude, Outlier Media invites you to join us for a lunchtime concert performance with violinist Pretty Stringz. Join us for twenty-five minutes of virtual music from wherever you are in the world. We offer you this communal space to reflect, find a space for gratitude, and breathe! It’s a gift to our community.
MUSIC・8 DAYS AGO

Ontario-based singer-songwriter Collin Clowes has unveiled his new single, “Polaroid” from his debut EP, Sleepy. Persistence, along with a firm dedication to the music-making process, puts artist Collin Clowes in a league of his own. The production value and rhythmic polish on the EP are more characteristically associated with high-value teams of musicians and producers, not the debut of a single artist, and Clowes’ ear for pop melodies and multi-layered vocals reveal a sonic texture that is mature beyond its years.
MUSIC・11 DAYS AGO
crescentavalleyweekly.com

Holocaust Instruments to be Played in ‘Violins of Hope’ Concert

The Los Angeles Jewish Symphony will play the Violins of Hope on Sunday, Dec. 12 at The Soraya in Northridge. The event will begin at 7 p.m. and tickets can be purchased on www.thesoraya.org or by calling (818) 677-3000. The Violins of Hope is a private collection of more than...
LOS ANGELES, CA・6 DAYS AGO
GALVESTON.COM