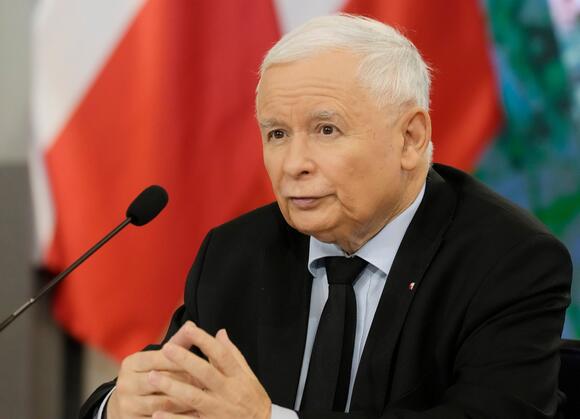 Poland's ruling party leader presented plans Tuesday for a bill to “defend the fatherland,” legislation he said is aimed at “radically” strengthening the military as the country faces migration pressure from its eastern neighbor Belarus

Jaroslaw Kaczynski who holds the position of deputy prime minister but is undisputedly the most powerful politician in Poland, said the bill is needed due to a deteriorating international situation and also to Poland's geopolitical location. Examples he gave included neighboring “Russia's imperial ambitions” and the hybrid warfare being waged by Belarus against Poland and other European Union nations using migrants.

"If we want to avoid the worst, that is war, we have to act according to the old rule: ‘If you want peace, prepare for war,’” Kaczynski said at a news conference in Warsaw

He argued that, as a country which lies on the eastern flank of the European Union and NATO, Poland must have a serious deterrent force and the “ability to effectively defend itself for a long time on its own.”

The bill, which still needs approval from parliament and the president, is aimed at replacing an existing one from 1967. At that time Poland was a member of Warsaw Pact eastern military alliance, under Moscow's control. Since 1999 it has been a member of NATO, and is regularly cited as one of the few alliance members that invest at least 2% of its GDP in defense.

Kaczynski and Blaszczak presented a plan to increase the defense budget further and to more than double the size of the military to 250,000 soldiers, up from the current 110,000. The changes do not involve a reinstatement of compulsory military service.

Some opposition lawmakers criticized the plans, noting that they come from the ruling Law and Justice party, which they said repeatedly has weakened the military.

“It doesn’t look good,” said Cezary Tomczyk, a lawmaker with the centrist Civic Platform party. “Who purged the army of generals, colonels and majors? Who stopped the modernization of the Polish army?”

The plan to strengthen the army comes as Poland faces heavy migration pressure from Belarus. Warsaw accuses the Belarusian regime of President Alexander Lukashenko of encouraging migrants from the Mideast, Africa and elsewhere to seek entry to the EU through Poland.

It also comes as Poland finds itself increasingly at odds with its EU partners, with a conflict over changes to Polish courts — which the EU sees as an attack on judicial independence — escalating this month. Prime Minister Mateusz Morawiecki told the Financial Times in comments published Monday that if the EU withholds funds to Poland over rule of law issues, it would be like starting World War III.

In a separate political development, Morawiecki announced changes to his Cabinet on Tuesday, among them new appointees to head the climate ministry, the agriculture ministry and the ministry of technology and development. Some observers said the changes involve the departures of some Morawiecki allies.

Poland has reacted to the migrant crisis by declaring a state of emergency along the border with Belarus. It has also been fortifying the border with razor wire and has deployed soldiers to help border guards. The government also plans to construct a high permanent barrier with motion sensors.

Polish border guards have also been pushing migrants back across the border, including some families with children. A new Polish law took effect Tuesday that legalizes the pushbacks.

Human rights officials have criticized Poland's state of emergency while the UN refugee agency has said that the new legislation “undermines the fundamental right to seek asylum."

Follow all AP stories about global migration at https://apnews.com/hub/migration.

As much as I empathize for Belorussian people living under a dictatorship, Putin would inevitably use a migratory for e to take parts of Poland like he has done in Ukraine and Georgia. Poland needs a strong border defense and strong military to keep back potential Belorussian militant forces disguised as refugees sent to occupy Polish territory and fracture Poland’s political structure.

The Government is considering “defensive support” for Ukraine amid warnings that the country may be “weeks away” from war with Russia Foreign Office minister Vicky Ford told MPs that any “military incursion” by Russia into the Eastern European country would be a “strategic mistake”.She was warned by Conservative MP Bob Seely (Isle of Wight) that war in Ukraine could be imminent, as he called for the Nord Stream 2 gas pipeline project to be cancelled, with the aim of weakening Russia’s energy leverage over European nations.Putin needs to de-escalate now and return to diplomatic channelsForeign Office minister Vicky FordMinister Ms...
POLITICS・16 HOURS AGO
The Independent

Polish Prime Minister Mateusz Morawiecki on Monday defended a recent meeting of European populist leaders by saying Poland is seeking allies in its challenge of what he called a “centralized Europe.”Morawiecki was reacting to criticism of the meeting hosted Saturday in Warsaw by Poland’s ruling conservative Law and Justice party. Far-right politicians including Marine Le Pen of France and Santiago Abascal of Spain's Vox party were among the participants.Referring to numerous tensions between the Polish government and European Union s leading bodies, Morawiecki told a news conference that Poland was being treated unfairly and receiving “low blows.” He said...
POLITICS・1 DAY AGO
Newsweek

The U.S. has warned its partners against purchasing Russian military equipment if they wish to avoid sanctions under a 2017 law.
WORLD・1 DAY AGO
San Diego Union-Tribune

Russian President Vladimir Putin has voiced hope for a quick approval of the country's Sputnik V coronavirus vaccine by the World Health Organization, saying the move is essential for expanding its global supplies
PHARMACEUTICALS・2 DAYS AGO

MOSCOW (Reuters) -Belarus on Saturday accused a Ukrainian military helicopter of flouting its border during manoeuvres and flying one kilometre (0.62 miles) into Belarusian territory. The state border service issued a statement and a video of what it said was the Ukrainian helicopter flying across a snowy, wooded area at...
MILITARY・3 DAYS AGO
realcleardefense.com

Russia has deployed its first regular unit of Terminator combat support tanks. The first Terminator company – equipped with nine BMPT-72s – was assigned to the 90th Guards Tank Division, which is stationed in the Sverdlovsk and Chelyabinsk areas of the Urals region in Central Russia, according to Russian news agency TASS.
MILITARY・3 DAYS AGO
The Guardian

Poland plans to set up register of pregnancies to report miscarriages

Proposed register would come into effect in January, a year after near-total ban on abortion
WOMEN'S HEALTH・4 DAYS AGO
Business Insider

Well, this was a rather frightening thing to wake up to this morning. GPS World reports:. The Kremlin warned it could blow up 32 GPS satellites with its new anti-satellite technology, ASAT, which it tested Nov. 15 on a retired Soviet Tselina-D satellite, according to numerous news reports. On the...
POLITICS・6 DAYS AGO
Newsweek

The deployment comes as speculation continues about a Russian invasion of Ukraine.
MILITARY・5 DAYS AGO
dallassun.com

ONBOARD A MILITARY AIRCRAFT - The United States is reaching out to allies in response to Russia's military build-up along its border with Ukraine. U.S. Defense Secretary Lloyd Austin spoke by phone with Polish Minister of National Defense Mariusz Blaszczak Tuesday to discuss what the Pentagon has repeatedly described as Moscow's "unusual military activity."
MILITARY・7 DAYS AGO
americanmilitarynews.com

Russian President Vladimir Putin threatened a Russian retaliation if the U.S. or NATO allies cross a “red line” by reinforcing Ukraine by sending certain weapons, such as hypersonic weapons, cruise missiles and missile defense systems, to which he said Russia will match. “If some kind of strike systems appear on...
MILITARY・7 DAYS AGO

Aegis Ashore planned for Poland is on target for 2022

The program executive officer for Aegis Ballistic Missile Defense said the Aegis Ashore capability planned for Poland is moving ahead to be operational by the end of next year…. The Aegis Combat System was originally designed as a shipboard system to track and destroy incoming enemy targets, but now the...
MILITARY・11 DAYS AGO
froggyweb.com

BOGOTA (Reuters) – Venezuela’s weekend election took place with better conditions for voters than previous contests, but there were instances of people being arbitrarily turned away and the country must strengthen its electoral authority, the head of the European Union’s observation mission said on Tuesday. The vote for regional and...
WORLD・14 DAYS AGO
hngn.com

The Royal Navy alarmed is over Putin's interest in how the HMS Queen Elizabeth and assets are recovering the debris of the lost F-35. The stealth fighter went down from the first day that sent British naval units on a race against Russian subs. Russian forces are eyeing how the...
MILITARY・16 DAYS AGO
Business Insider

US warships went on another mission to a European hotspot, and Putin says they're in Russia's 'crosshairs'

In early November, US Navy ships, including the Sixth Fleet's flagships, returned to the Black Sea. The visit is a sign of the US's increasing focus on the region, where NATO forces are spending more time. The increased military activity reflects the sea's strategic value amid tensions between NATO and...
MILITARY・21 DAYS AGO
Telegraph

An American nuclear artillery unit has been reactivated in Germany for the first time since the Cold War and is to be armed with new long-range hypersonic weapons. The US Army officially recommissioned the 56th Artillery Command in Germany this week during a ceremony in Mainz-Kastel, which hosts America’s Europe and Africa commands.
MILITARY・28 DAYS AGO
The Independent

President Joe Biden and Vladimir Putin were still far apart after two hours of talks on the escalating crisis caused by Russia’s massing of tens of thousands of troops near its border with Ukraine Biden delivered a simple message during Tuesday’s video call with Putin: invade Ukraine again and face painful sanctions that will do resounding harm to your economy. Putin had his own blunt take, according to his foreign adviser Yuri Ushakov, telling the U.S. president that “the Russian troops are on their own territory, and they don’t threaten anyone.”With no immediate breakthrough to ease tensions on the...
POLITICS・1 HOUR AGO