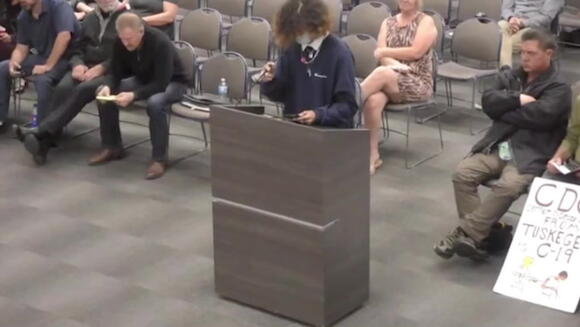 Parents reportedly jeered at an immunocompromised student after they spoke in favour of mask mandates at a school board meeting in Clovis , California , prompting the district to promise that changes will be made to ensure that everyone speaking at meetings feel safe.

Buchanan High School senior Rami Zwebti was booed after they spoke during the meeting on Wednesday, The Fresno Bee reported. Zwebti identifies as non-binary, according to the outlet .

“We sit here arguing about a piece of fabric that weighs 12 grams while millions of families lose their loved ones,” Zwebti said. “Set aside your pretentious arrogance and think of those you hold dear. Think about how you would feel if they were suddenly taken from without warning, without mercy.”

“I’m sick of hearing abled individuals complain about masking and vaccines. Your ignorance and privilege speak volumes,” they added.

Superintendent Eimear O’Brien told The Fresno Bee that she had asked Clovis Unified School Board President Steven Fogg to “re-examine his current meeting protocols to ensure our students feel safe when attending future board meetings”.

Ms O’Brien said Dr Fogg had said that he would contact Zwebti “to convey his commitment to the creation of a more respectful environment in the future”.

“We WILL not tolerate the mistreatment of our board members, parents or students who speak at our board meetings,” Dr Fogg told the local news outlet.

“As an immunocompromised individual, I am placing myself in danger by being here,” Zwebti said during the meeting. “Due to the nature of immune diseases, we are not able to identify someone as ill simply by looking at them. That means anyone can be at risk. Anyone can be in danger – your neighbours, your employer, your friend, your child’s teacher.”

They added that they had watched protests against vaccines and masks turn violent and lead to “a complete loss of democracy. I hope that the people in this room are mature enough to not behave in such a manner”.

One person at the meeting told Zwebti to sit down while others jeered and booed, the paper reported.

The student told The Bee that they left the room crying to sit in the looby because of feeling overwhelmed at the negative response to the speech.

A woman speaking at the podium against protective measures asked if everyone should stop drinking water if one person is allergic to water.

“I think this is a prime example, we need to teach the constitution more in schools,” one parent said to cheers from members of the community.

Ms O’Brien told The Bee that what Zwebti faced was “disturbing and utterly unacceptable”.

“Members of my administration, along with our onsite police officers, immediately stepped in last night to make sure our student knew that our team was present to protect and support [them],” she said. “In Clovis Unified, we have always been committed to creating an environment where everyone feels able to share their opinions, to be heard, and to do so without fear of bullying behaviour by members of the public attending our meetings.”

She added that she reached to Zwebti to thank them for sharing “an opinion that [they] knew was counter to others who have spoken at prior board meetings”.

The student told The Bee that officials had spoken to them to “make sure I was safe, which helped a lot since I did not feel comfortable after giving my speech”. They added that they had been mocked at previous meetings for wearing a dress while arguing that the dress code should be changed.

Fresno City Councilmember Miguel Arias tweeted on 21 October that anti-maskers had been directed to the meeting after the Fresno County Board of Supervisors passed a measure that supported local control over restrictions and rules relating to Covid-19. Local schools still have to follow state laws.

Fresno Bee reporter Ashleigh Panoo tweeted that she watched Zwabti “leave the boardroom last night after being booed out by parents. So I went out to talk to them about how they were feeling. You can’t hear in the video, but the crowd made a lot of comments as they took their seat”.

School board meetings have become a hotbed of political polarization across the US, with some parents being outraged at the ways they think race and history are being taught in schools, as well as at Covid-19 restrictions faced by students and staff.

That's what they do! Selfish people. That's somebody's child. Would they like someone to do that to their own kids. Low behavior is in since Trump was in.

The ones yapping about the Constitution are the ones who have never read it. Would love if a history teacher would say ok lady let's have a quiz right now. Let's see what a scholar you are.

So they want to be treated special and then mock a child for wanting to get protected go back to school. Next they might put a hit out on the kid for not being strong enough.

Parents knowingly sent their child to school after they tested positive for Covid-19. 75 classmates were forced to quarantine

One family’s decision to send their child to school after testing positive for Covid-19 resulted in dozens of canceled Thanksgiving plans for other classmates, according to a California school district. Parents of one elementary student knew their child tested positive for the virus but continued to send them to school...
CALIFORNIA, MO・9 HOURS AGO
upr.org

The Cache County Board of Education’s regular meeting Thursday was met with a large crowd of concerned residents and parents looking to provide public feedback on the recent Sky View controversy. The controversy involved a Nov. 23 diversity assembly at the Smithfield high school, during which a country music video...
CACHE COUNTY, UT・19 HOURS AGO
Business Insider

Quality Journalism for Critical Times Prior to the pandemic, nearly all the religious exemption requests clients brought attorney James Reidy sought a work schedule accommodation for religious holidays and practices. Reidy represents employers, and those with vaccine mandates are coming to him with a new question these days: Given that an employee need only attest that their “sincerely held” religious […] The post Religious exemption requests related to COVID vaccine a growing challenge for employers appeared first on Florida Phoenix.
RELIGION・1 DAY AGO

President Joe Biden may not need Attorney General Merrick Garland to send FBI agents to harass parents at local school board meetings. The locals seem to be doing fine on their own. Case in point: The Round Rock Independent School District near Austin, Texas. Conservative writer Christopher Rufo, best known...
LAW ENFORCEMENT・9 DAYS AGO
ABC10

At Sitka School Board meeting, parents push for change to mask policy

Dozens of parents spoke out against masks in Sitka’s public schools Wednesday (12-1-21) during a meeting of the Sitka School Board. The school district requires masks unless the community’s coronavirus alert level is ‘low’, But so far Sitka’s case count has been high enough to warrant masks all year. Some...
3 DAYS AGO
Shropshire Star

Anti-vaxx protesters should not be anywhere near schools – Zahawi

The Education Secretary indicated he would prefer to focus on arresting protesters, rather than introducing exclusion zones. The Education Secretary has said anti-vaccine protesters should not be going “anywhere near” teachers or pupils, but expressed reservations about exclusion zones outside schools. Speaking to LBC on Monday morning, Nadhim Zahawi said...
14 DAYS AGO

Some parents are silently voicing opposition to a potential mandate requiring children to receive the COVID-19 vaccination. Operation Shoe Drop, promoted by an anti-vaccine group called NJ For Medical Freedom, is encouraging parents to leave pairs of shoes at schools. The shoed eventually will be donated to Habitat for Humanity in Newark, according to Shoe Drop spokeswoman Edie Nico.
5 DAYS AGO
YourErie

Less than two-thirds of parents give schools an A or B for their handling of students’ academic and social-emotional needs during the pandemic, and almost 60 percent said they haven’t seen or heard anything about additional resources their schools can provide to address these issues, according to a new poll released Monday.  Sixty-one percent assigned […]
EDUCATION・14 DAYS AGO
San Francisco Chronicle

Corte Madera school officials have vowed to take “corrective action” after the parents of an elementary school student knowingly sent the child and a sibling to class despite the child’s having tested positive for COVID-19, spurring a spate of other infections. As of Friday, school officials said eight children at...
MARIN COUNTY, CA・2 DAYS AGO

COLUMBUS, Ohio (WSYX) — Civic leaders in south Columbus are calling ABC6 On Your Side Problem Solvers to follow up on a franchise investigation into school violence that aired this week. Problem Solver Lisa Rantala spoke with parents and students affected by what they call increased tensions, fighting, and attacks....
COLUMBUS, OH・10 DAYS AGO
cbslocal.com

MINNEAPOLIS (WCCO) — Parents in Prior Lake shut down a school board meeting Monday night while demanding accountability after a student’s racist rant video went viral. The video in question, which surfaced earlier this month on social media, appears to show a white, female Prior Lake student using the N-word to refer to a Black student, whom she encourages to kill herself. The video led to a large student protest outside Prior Lake High School on Nov. 11.
14 DAYS AGO
WTVCFOX

NASHVILLE, Tenn. — Parents will now be able to track key data about their child's school with a new interactive online dashboard. It comes from the Tennessee Comptroller’s Office of Research and Education Accountability (OREA). It will show data for things like student demographics, salaries and personnel, and state and...
5 DAYS AGO
msuexponent.com

ROCKBRIDGE COUNTY, Va. – An anti-Semitic photo and a gun — two things recently found at Rockbridge County High School just 24 hours apart from each other. Parents are outraged and calling on the school to do more to protect students. Thursday night, Rockbridge County Public Schools sent a press...
3 DAYS AGO
KTLA

Northern California parents knowingly sent their COVID-19 positive child and a sibling to school last month in violation of isolation and quarantine rules, causing a coronavirus outbreak in an elementary school, officials said Saturday. The child tested positive for the virus during the week of Nov. 8, according to Brett Geithman, superintendent of the Larkspur-Corte […]
MARIN COUNTY, CA・2 DAYS AGO
cbslocal.com

CORTE MADERA (CBS SF/AP) — An outbreak at a Conte Madera elementary school began after parents knowingly sent their COVID-19 positive child and a sibling to school last month in violation of isolation and quarantine rules, officials said Saturday. The child tested positive for the virus during the week of...
2 DAYS AGO
KQED

In Marin County, a couple knowingly sent their COVID-19-positive child and a sibling to school last month in violation of isolation and quarantine rules, causing a coronavirus outbreak in an elementary school, officials said Saturday. The parents could face a fine or a misdemeanor charge for violating Marin County’s health...
MARIN COUNTY, CA・1 DAY AGO