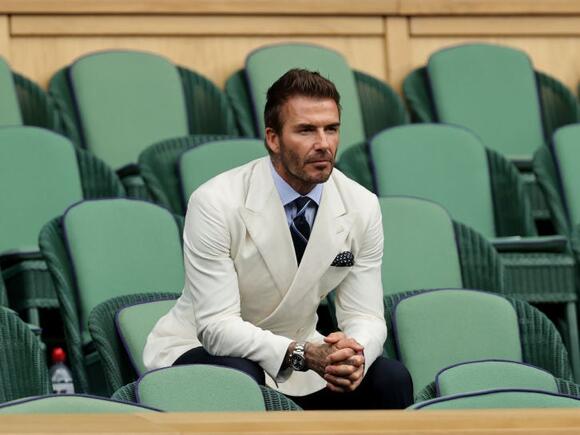 Former England international David Beckham has been urged to raise awareness about the human rights issues in Qatar by Amnesty International .

The 46-year-old has taken up a role as an ambassador for the 2022 World Cup in Qatar , which will take place next year between 21 November and 18 December.

But there remains a significant amount of controversy around the tournament due to the troubling human rights issues associated with the hosts.

And Amnesty ’s Sacha Deshmukh hopes figures like Beckham can speak out about the problems the country clearly face.

He told BBC Sport : “Qatar’s human rights record is troubling, from the country’s long-standing mistreatment of migrant workers, to its curbs on free speech and the criminalisation of same-sex relations.

“It’s not surprising that David Beckham wants to be involved in such a major football event, but we would urge him to learn about the deeply concerning human rights situation in Qatar and be prepared to speak out about it.”

Migrant workers have been used by Qatar to help build the infrastructure needed to host the World Cup.

But Amnesty claim thousands of deaths related to the construction of the buildings have not been properly investigated.

A spokesperson for Beckham said: “David has been visiting Qatar regularly for over a decade and went on to play for (Qatar-owned) PSG - so he has seen the passion for football in the country and the long-term commitment that’s been made to hosting the World Cup and delivering a lasting legacy for the region.

“He’s always talked about the power of football as a force for good on many levels.

“As we reach the one year to go point he will join the wider football community that is coming together for the World Cup 2022 and he’s looking forward to what he thinks will be a great tournament.”

David Beckham is under yet more pressure over his multi-million pound deal to promote the 2022 World Cup after homosexuality was described as being ‘against human nature’ on a Qatari TV channel run by a close friend. Football pundit Mohamed Aboutrika, a former Egypt international, launched the offensive tirade on...
PREMIER LEAGUE・1 DAY AGO
goal.com

Gareth Southgate says he will try and learn all he can about the human rights issues in Qatar before heading to the 2022 World Cup.England boss Southgate, who has signed a two-year contract extension until December 2024, will lead the Three Lions to the first winter World Cup, to be held in Qatar from 21 November until 18 December next year.Same-sex relationships are banned in Qatar, while the country has also been widely criticised for its treatment of migrant workers, who have helped build all the infrastructure required to host a World Cup.“As the manager, I’m trying to educate myself...
WORLD・14 DAYS AGO
Imperial Valley Press Online

WASHINGTON (AP) — The tiny Arab nation of Qatar has for years employed a former CIA officer to help spy on soccer officials as part of a no-expense-spared effort to win and hold on to the 2022 World Cup tournament, an investigation by The Associated Press has found. It’s part...
FIFA・13 DAYS AGO

In less than a year, millions of football fans will descend on Qatar to cheer on their favourite teams in the 2022 World Cup. They’ll be greeted by dozens of shiny new hotels, restaurants, roadways, and seven glistening new football stadiums. It will be a proud moment for Qatar – and for the entire region, which has never previously hosted a World Cup.
SOCCER・13 DAYS AGO
Democrat-Herald

World Cup 2022: Which teams qualify for the Qatar finals?

Several nations have now secured their place in the 2022 World Cup in Qatar, while others must wait for play-offs. Who will be in Qatar and who is in the play-offs?
SOCCER・13 DAYS AGO
dallassun.com

A diplomatic row has broken out between Norway and World Cup hosts Qatar after two journalists were arrested in the Middle Eastern country. NRK sports reporter Halvor Ekeland and NRK cameraman Lokman Ghorbani were apprehended on Sunday while preparing to head to Doha Airport. Just hours earlier, they had completed...
FIFA・12 DAYS AGO
GreenwichTime

DUBAI, United Arab Emirates (AP) — Security forces in Qatar detained two journalists from Norwegian state television for over 30 hours and deleted footage they gathered at a migrant labor camp as they tried to report on worker issues ahead of the FIFA 2022 World Cup, authorities said Wednesday. Qatar's...
FIFA・12 DAYS AGO

With less than a year to go before the start of the 2022 FIFA World Cup, questions surrounding host nation Qatar’s handling of humanitarian issues show few signs of abating — specifically concerning the state’s anti-homosexuality laws. Nasser Al Khater, the chief executive of the tournament’s organizing committee, insists that...
UEFA・6 DAYS AGO
businesstraveller.com

The stunning Al Bayt Stadium – which will host the first match of next year’s FIFA World Cup was unveiled by Qatar on the opening day of the FIFA Arab Cup. The 60,000-capacity venue designed to resemble the tents historically used by nomadic people in the Gulf region hosted Qatar’s 1-0 victory against Bahrain as the 16-team tournament got off to an exciting start.
FIFA・5 DAYS AGO
The Independent

What about us? Qataris demand their rights ahead of World Cup

It is 11 years since Sepp Blatter opened a plain envelope, pulled out a small, white card and revealed which country would host the 2022 football World Cup.Since that day – 2 December 2010 – the little-known Gulf state of Qatar has been thrust into a relentless spotlight of scrutiny, which shows little sign of dimming. It has been globally vilified for its human rights record and become almost a byword for migrant workers’ abuse over its treatment of those preparing the country for next year’s tournament.The issue of human rights in Qatar has become a well-told story: workers badly...
WORLD・5 DAYS AGO
Reuters

Hamilton speaks out on human rights ahead of Saudi F1 debut

Dec 2 (Reuters) - Seven-times Formula One world champion Lewis Hamilton expressed concern about human rights in Saudi Arabia on Thursday and indicated he did not feel comfortable about having to race in the kingdom. Saudi Arabia is hosting a grand prix for the first time this weekend, a night...
MOTORSPORTS・4 DAYS AGO

The Football Association have approached Amnesty to brief England players on Qatar’s human rights record ahead of crucial talks scheduled for March. Sportsmail understands that England players are expected to decide early next year whether to protest against World Cup host Qatar’s dreadful human rights history during pivotal discussions at St George’s Park, with players under pressure to use their platforms to make a stand against the alleged atrocities.
WORLD・2 DAYS AGO
The Guardian

F1 under pressure to speak out against Saudi human right abuses

Xavi Hernandez faces his first critical test as Barcelona coach with the club at risk of failing to make the Champions League knockout stages for the first time in two decades. Europa League consolation All third-placed clubs will drop into the Europa League, but a revised format now sees them face the group runner-ups from the second-tier tournament in a play-off round before the last 16.
SOCCER・16 HOURS AGO
The Independent

Valérie Pécresse, the candidate now chosen by the main centre-right French party, Les Républicains, could easily have fitted into Emmanuel Macron’s cabinet. She is a centrist, liberal, multi-lingual, pro-business technocrat with the same elite education as Macron. An English comparison might be Amber Rudd or, in a previous Tory government,...
ELECTIONS・7 HOURS AGO
AFP

England haven't won a Test at Brisbane's 'Gabbatoir' since 1986 and will need to conquer those psychological demons to avoid another potentially fatal start to their Ashes campaign on Wednesday. But there is a glimmer of hope for Joe Root's men, despite their notoriously poor record at the formidable Gabba ground, where England have claimed just two Test victories since the end of World War II. It comes courtesy of India, who pulled off a stunning three-wicket upset in January, snapping Australia's undefeated red-ball streak in the Queensland capital stretching back to 1988. "Look at that India team that won at the Gabba. They were a long way from their first-choice XI but they had no fear," skipper Root said ahead of his departure for Australia.
WORLD・1 DAY AGO
The Independent

Pakistan s prime minister told Sri Lanka's president that more than 100 people have been detained in the lynching of a Sri Lankan factory manager and suspects will be “prosecuted with the full severity of the law.”Imran Khan said in an overnight tweet that he spoke to Sri Lankan President Gotabaya Rajapaksa by phone to convey the country's anger and shame and assure him that justice would be done for Friday's “vigilante killing” of Priyantha Kumara.A mob of hundreds of enraged Muslims descended on the sports equipment factory in the district of Sialkot in Punjab province after the Sri...
WORLD・1 DAY AGO
San Diego Union-Tribune

Chelsea won the Women's FA Cup on Sunday to clinch a domestic treble for the first time
SAN DIEGO, CA・1 DAY AGO
The Independent

Eric Zemmour: The far-right figure using outrage to fuel a bid for the French presidency

France is a foreign country; they do politics differently there. For all that he has been compared to Donald Trump, Boris Johnson and Nigel Farage, Eric Zemmour, the latest French presidential candidate to cause a stir, is in a category of his own. What makes Zemmour – who has formally...
PRESIDENTIAL ELECTION・22 HOURS AGO