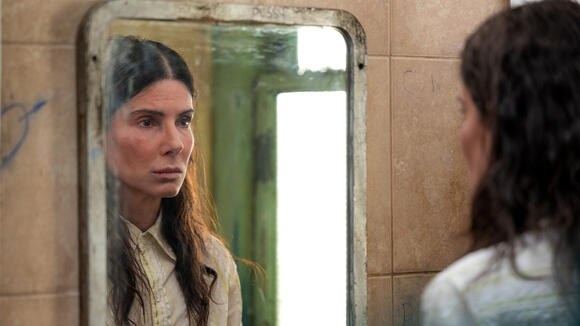 In her first movie role since starring in another Netflix movie title — 2018’s disaster drama Bird Box — the Oscar-winning actress plays Ruth Slater, a woman released from prison after serving a sentence for a violent crime.

But attempting to re-enter society is difficult and complicated by a community more interested in doling out severe judgment than forgiving her past. To help her find redemption, Slater attempts to locate her estranged younger sister that she was forced to leave behind.

That search, and whether those in Slater’s life believe she’s deserving of that reconnection, underpins much of the two-and-a-half-minute trailer. As Bullock’s character makes her way from prison after 20 years and attempts to reintegrate into society with a job, she’s continually harassed — through threatening phone calls and even physical violence.

Her crime of killing a cop has many in town judging Slater as irredeemable, and “not a victim,” as Viola Davis’ character makes clear. But others offer more compassion to the formerly incarcerated woman “who did her time,” and lots of blunt honesty about why her fight to reconnect with her sister shouldn’t drive how her life restarts.

The Unforgivable releases in select U.S. theaters on Nov. 24 and drops on Netflix on Dec. 10th.

MGM’s Pamela Abdy Talks ‘House of Gucci,’ the Future of Bond and Amazon

As a teenager growing up in New Jersey, Pamela Abdy danced competitively five to six days a week. Her dream of making it a career was shattered, along with her foot, during her sophomore year at Boston’s Emerson College, but a professor made a compelling connection by comparing cinema to choreography. Abdy had found her new calling: producing movies. Many years later, as the pandemic shut down Hollywood in spring 2020, MGM chief Michael De Luca convinced Abdy to come on board as president of the studio’s motion picture group. Within weeks of her arrival there, where Abdy now oversees eight...
LOS ANGELES, CA・3 DAYS AGO
The Hollywood Reporter

Casey Affleck has lined up his next lead role. The Oscar-winning star of Manchester By The Sea – recently seen in The World to Come and Our Friend — will appear alongside Tony and Emmy winner Laurence Fishburne (The Matrix, John Wick) in the psychological sci-fi thriller Slingshot, being directed by Mikael Håfström (Outside the Wire, Escape Plan, The Rite, 1408). From a screenplay by R. Scott Adams (Donner Pass) and Nathan Parker (Moon), Slingshot will tell the story of an astronaut struggling to maintain his grip on reality aboard a possibly fatally compromised mission to Saturn’s moon Titan. Fast-rising British actress Emily Beecham...
MOVIES・3 DAYS AGO
The Hollywood Reporter

Every year, Hollywood gives millions to LGBTQ organizations, partnering with the likes of GLAAD, HRC, The Trevor Project and The Point Foundation for starry galas as A-listers sit on their boards or serve on host committees. But it’s the “T” that seems to have gotten less financial commitment than the rest of the acronym, as transgender organizations report a mixed bag of industry support — even as Dave Chappelle’s transphobic comments in his recent Netflix special brought a renewed spotlight to the issues many trans people still face. “We’re seeing much more thoughtfulness out of Hollywood about trans characters and casting...
LOS ANGELES, CA・3 DAYS AGO
Best Life

Keanu Reeves and Sandra Bullock met around the time that they started filming the 1994 movie Speed. They went on to become good friends and star in another movie together, the 2006 romance The Lake House. But, even though they've been a great match on screen, Reeves and Bullock never dated in real life. That doesn't mean they were never interested in dating each other, though.
CELEBRITIES・4 DAYS AGO

Sally Wainwright’s award-winning ITV crime drama Unforgiven has been redeveloped for Netflix as a feature film; it has been transplanted from Yorkshire to Seattle, and the title has been changed, perhaps to prevent any confusion with the Clint Eastwood movie. Sandra Bullock takes over Suranne Jones’s leading role as Ruth Slater, a woman released from prison on licence after 20 years for killing a cop in a semi-accidental spasm of rage and fear when the officer was sent in to enforce her eviction. Now she is obsessed with tracking down her only family: kid sister Katherine, who was put up for adoption after Ruth was sent down.
MOVIES・3 DAYS AGO
People

Sandra Bullock has high hopes for her daughter Laila, and isn't afraid to share them. The Oscar winner, 57, discussed parenting advice and her dreams for her daughter with PEOPLE (the TV Show!) host Jeremy Parsons on Friday. One of those dreams, which the actress said was "just a fact,"...
POTUS・7 DAYS AGO
People

Sandra Bullock's Son Louis Convinced Her Not to Take 'Unfortunate' Movie Role: 'He Was Actually Right'

Sandra Bullock's son seems to know what's best for her career. The 57-year-old actress appeared on Monday night's episode of Jimmy Kimmel Live where she opened up about her 11-year-old son Louis and his spot-on career advice. Bullock explained that years ago, she passed on an "unfortunate" movie after her son convinced her that she should not take the role.
CELEBRITIES・3 DAYS AGO
In Style

One of the original internet boyfriends just got a little bit dreamier. Keanu Reeves, who has been melting hearts (and becoming a meme favorite) since the beginning of time — OK, maybe since the '80s — shared a story about his co-star Sandra Bullock that's sure to give stans even more reason to love him. In a new interview with Esquire, Reeves recounted a story about sharing Champagne and chocolate truffles with Bullock after she mentioned that she'd never had the opportunity to experience the oft-mentioned and supposedly sexy culinary pairing.
CELEBRITIES・4 DAYS AGO

In an interview with Esquire, Sandra Bullock recalled a sweet memory with Speed costar Keanu Reeves. Following a conversation on set about Champagne and truffles, during which Bullock said she hadn’t tried them, Reeves showed up on her doorstep a few days later with the goodies in hand. Keanu reportedly said, “I just thought you might want to try Champagne and truffles, to see what it's like.”
CELEBRITIES・3 DAYS AGO
KARE

They may have had off-the-charts chemistry on the big screen, but Sandra Bullock and Keanu Reeves insist they were never an item in real life. In a profile about 57-year-old Reeves for Esquire, Bullock opens up about the romance rumors surrounding her and her co-star while they filmed 1994's Speed and 2006's The Lake House.
CELEBRITIES・4 DAYS AGO
UPI News

Nov. 23 (UPI) -- Sandra Bullock denied rumors that she will be starring in Spider-Man: No Way Home while appearing on Jimmy Kimmel Live. Kimmel asked Bullock on Monday about her starring as Madame Web, a character with psychic powers, which the actress said wasn't happening. Bullock mentioned how her...
MOVIES・4 DAYS AGO
FOX 40 News WICZ TV

Sandra Bullock has shared the big screen with Keanu Reeves twice -- but she's down for a third and even has an idea. Speaking to Esquire magazine for a profile on her "Speed" co-star, Bullock said she'd "love nothing more than to do a comedy with Keanu before we both die." (Grim, but OK.)
CELEBRITIES・4 DAYS AGO

During a recent interview with Esquire magazine The Unforgivable star said: ‘Keanu’s a guy who, I feel like, is friends with every woman he’s ever dated. 'I don’t think there’s anyone who has something horrible to say about him. So maybe we could have survived.’. Over the years Bullock has...
CELEBRITIES・3 DAYS AGO
Yardbarker

Sandra Bullock's son doesn't watch her movies: 'I am not his cup of tea'

Sandra Bullock is a generational movie star. Her 11-year-old son, Louis, is not impressed. The Oscar winner visited "Jimmy Kimmel Live" on Monday and shared that 2000 action comedy Miss Congeniality is the movie fans most often mention to her. "I think because we made it for young girls, and...
CELEBRITIES・3 DAYS AGO
epicstream.com

Sandra Bullock said she would love to work with Reeves again in a comedy movie. Sandra Bullock revealed some ideas she had on what her next movie would be with Keanu Reeves. The 57-year-old actress has shared the big screen with Reeves on two movies, but she said she is more than willing to shoot another movie with her Speed co-star.
MOVIES・4 DAYS AGO
wmagazine.com

Sandra Bullock is back in the public eye just in time to promote her upcoming Netflix film, The Unforgivable. On Monday, Bullock stopped by Jimmy Kimmel Live!, her first public appearance since she walked the red carpet at the Golden Globe Awards in January 2020. Of course, Bullock needed the perfect look for her big return, and she did not disappoint.
CELEBRITIES・3 DAYS AGO
Page Six

Purple suits are fall’s It look thanks to Sandra Bullock, Taylor Swift

Purple is reigning over Hollywood. “Hawkeye” heroine Hailee Steinfeld walked the streets of NYC on Monday in a fitted David Koma ensemble, topped with a fluffy fur coat by Adrienne Landau. Lush velour is having a moment too, with Taylor Swift donning a double-breasted look for the premiere of “All Too Well: The Short Film.” Elizabeth Banks sported a dark purple suit to the Breeders’ Cup earlier this month, and, in late September, Kate Middleton wore an Emilia Wickstead plum number while visiting Northern Ireland.
DESIGNERS & COLLECTIONS・2 DAYS AGO
Variety

Jurnee Smollett has landed the female lead in “The Burial,” a new courtroom drama from Amazon Studios. The “Lovecraft Country” actor will star opposite Jamie Foxx and Tommy Lee Jones in the Maggie Betts-directed project. Based on a true story, the film follows a bankrupt funeral home owner who decides to sue a rival businessman over a handshake deal gone wrong. The owner hires a flamboyant attorney (Foxx) to handle the case. Smollett will play Foxx’s opposing counsel, sources said. Betts is directing from a script written by Doug Wright. Producers on the film include Bobby Shriver via his Bobby Shriver Inc....
MOVIES・8 DAYS AGO
SheKnows

While some may aspire to be Amy Poehler ala Mean Girls “cool mom” status, it’s just not in the cards for everyone — and sometimes being the “uncool” mom is the way to go. Sandra Bullock recently says she knows she’s the “uncool” mom, and she embraces every part of it.
FAMILY RELATIONSHIPS・6 DAYS AGO