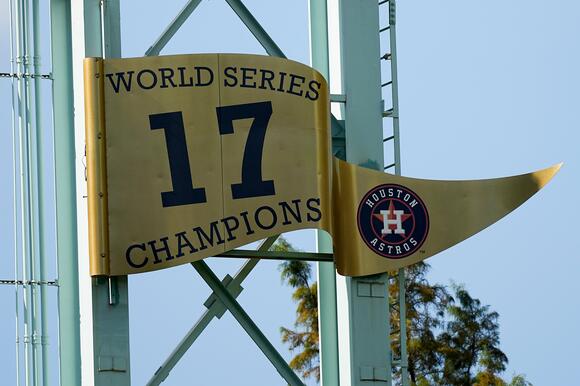 Remember April, when Major League Baseball (MLB) pulled this year’s All-Star game from Georgia to protest the state’s new restrictive voting law? At the time MLB Commissioner Rob Manfred said, “I have decided that the best way to demonstrate our values as a sport is by relocating this year’s All-Star Game and MLB Draft. Major League Baseball fundamentally supports voting rights for all Americans and opposes restrictions to the ballot box.”

But that was six months ago, an eternity in this country’s short attention span. Tonight’s opening game in the World Series between the Atlanta Braves and the Houston Astros will undoubtedly utter nary a syllable about Georgia’s infamous bill or the Astros 2017 cheat-a-thon World Series victory. (More about that in a minute.)

Manfred and MLB have moved on. As proof, one only had to witness the clinching game last Saturday in Atlanta against the Los Angeles Dodgers that featured country “star” Travis Tritt singing the national anthem. (Apparently Georgia Congresswoman Marjorie Taylor Greene was busy lifting weights and rustling up support for the January 6 insurrectionists.)

Tritt, a B-lister on the Nashville circuit of crooners, whose last forgettable hit came out 21 years ago, has been in the news recently for all the wrong reasons. The Georgia native canceled a series of concerts in venues where masks or a proof of a Covid-19 vaccination were required. This in spite of 700,000 Americans dead from Covid, a disproportionate amount of whom refused to get vaccinated. Tritt apparently supports those who are defying “the squelching of any specific freedoms and basic human rights around the world.” How patriotic of him. MLB’s response? Crickets.

Money speaks volumes. For Manfred to punish Georgia for its voting bill and pull the series out of Atlanta and move it to a neutral site would take the kind of courage that has never existed in the front offices or owners’ boxes of any American sport. Courage often cuts into the bottom line. (For the most recent example, see how the National Football League has blackballed Colin Kaepernick while using his activism as a marketing tool.)

In addition, we will have to endure the “tomahawk chop” and its accompanying racist bellow during the World Series at Truist Park. How this honors Native Americans remains a mystery to me. The National Congress of American Indians had it right when it stated that the chop “reinforces the racist view that Indians are uncivilized and uneducated, and it has been used to justify policies of forced assimilation and destruction of Indian culture. We would count the ‘tomahawk chop’ to be among those symbols.”

What should replace the chop and, while we are at it, the name “Braves,” would be a long-term, concerted marketing effort by MLB to educate fans as to how genocide of Native Americans is part and parcel of the “founding” of this country, and how the horrible conditions that Native Americans now endure on tribal lands are a continuation of that genocide.

Moving on to Houston, the largest city in a state that has given its citizens the most restrictive abortion laws perhaps in the Americas, complete with bounties for those busybodies that rat on any woman choosing what to do with her body. Contrast that with Texas Governor Abbott’s stand on mask and vaccine mandates that interfere with what he says is a citizen’s right to choose what to do with his or her body.

In 2019, the Houston Astros were revealed to have cheated during games held in 2017. There were few consequences for the players involved, several who are still on this year’s roster. They got to reap all the monetary rewards of their World Series win that year, sending a powerful lesson to all the kids out there: If you’re not cheating you’re not trying. The trophy is still theirs. The contracts are guaranteed.

When the Astros punched their ticket for this year’s World Series there was talk of “redemption” for the players. One October 24 headline specifically stated: “Astros Seek Redemption With World Series Win Over Braves.” Redemption for cheating? Is this some new-fangled definition I’m not familiar with?

To complete this year’s circle of infuriating characters, the Astros are managed by long-time old-school baseball guy Dusty Baker. You can be sure that between the barrage of ads for gambling sites (hello Pete Rose!) none of the baseball TV chatterboxes will dare mention Baker’s past coddling of MLB’s All-Star cheater and steroid stalwart Barry Bonds. Here’s Dusty defending Bonds on MLB Network: “Well, you know something, everyone talks about the PED use. I was there and I don’t know, and I don’t think other people know either because when I was a kid I used to say you were innocent until proven guilty.” Well, we all saw how Bonds’ head became as big as a pumpkin.

As to his current team’s legacy of dishonesty, Denying Dusty is as defiant as ever. “How many in the stands have never done anything wrong in their life? We paid the price for it. How many people have not cheated on a test or whatever at some point in time?”

So, to recap, we have cheaters managed by a see-no-evil guy playing a team that rallies around racist symbols and anti-vaxxers, both teams located in states that are vying to see who can race to the bottom the fastest.

This year, more than ever, baseball is as American as it gets.

Stephen J. Lyons is the author of five books of essays and journalism. His most recent book is “West of East.”

100 pct. Bullshit. Mommy and Daddy must be lamenting the money they wasted on sending you to the university of ' Man Buns'.. Being educated at the knee of Professor Pantywaste...

I know why the "Independent" chose their name. To fool people into thinking they are neutral. But their name is truly an oxymoron. They are nothing but left-wing Democratic propaganda. Terrible news app.

the independent... the hack author steven lyons... libtards for voter fraud... Georgia native Travis Tritt has an outstanding voice... mlb went woke... and they are regretting it...

As the 2021 season concludes, baseball fans and teams are excited for the exciting crop of MLB free agents who
NFL・2 DAYS AGO
FanSided

Astros players are changing their Twitter profile pictures, as Major League Baseball wipes all player photos from online rosters. If you haven’t been on Twitter today or have been strong enough to not download the application, you are missing out on a new movement from Major League Baseball players, including some Houston Astros.
HOUSTON, TX・1 DAY AGO
Black Enterprise

Potentially enlarging his ownership holdings big time, LeBron James and the Fenway Sports Group (FSG) announced plans to acquire the Pittsburgh Penguins. The group has agreed to purchase a controlling stake in the National Hockey League team. The sale calls for FSG to spend about $900 million, Sportskeeda reported. The...
NBA・2 DAYS AGO
Inside The Dodgers

As MLB Trade Rumors reported it, the Braves coughed up a lot of money for one of the only viable options at catcher on the free-agent market:. According to their sources, the Marlins were in on new Braves catcher Manny Pina before the Braves doubled the money Miami offered:. Pina...
MLB・16 HOURS AGO
Sportsnaut

Carlos Rodon is coming off a breakout season with the Chicago White Sox, who won the AL Central for the
MLB・2 DAYS AGO
Chicago Tribune

As MLB teams spend more than $1.5 billion ahead of an expected lockout, the Chicago Cubs have stayed largely on the sidelines — making only minor signings such as Clint Frazier and Yan Gomes

The premise of the Chicago Cubs’ offseason strategy sounded good in theory. Retool the roster by spending intelligently, as president of baseball operations Jed Hoyer has often put it, while being active in free agency to complement the players they value on their roster. At some point, though, words go only so far. The Cubs’ actions in the free-agent market will serve as the true indicator of ...
MLB・2 DAYS AGO
Sportsnaut

The New York Mets announced the signing of outfielder Starling Marte to a four-year contract Tuesday night. The Mets did
MLB・2 DAYS AGO

The Los Angeles Angels have re-signed right-handed closer Raisel Iglesias to a four-year, $58 million contract, multiple outlets reported. The
MLB・2 DAYS AGO
Inside The Blue Jays

Labor negotiations between the owners of the 30 Major League Baseball teams and the league's players association are moving slowly, and the league is headed toward a lockout that — if not resolved quickly — could impact the upcoming spring training season. MLB’s collective bargaining agreement is set to expire...
MLB・10 DAYS AGO
247Sports

RALEIGH, N.C. -- America's Team. Pack 13. Whatever you want to call them, NC State baseball has it all represented in one glorious ring for the 2021 team. On Friday night, the band got back together with the players from the 2021 team in Raleigh for one weekend, including those who left the program to pursue professional baseball. The entire Pack9 -- and Pack 13, for that matter -- will also receive their rings this weekend as part of a celebration of the team that's been in the works for months.
RALEIGH, NC・14 DAYS AGO

The Major League Baseball infielder has been a steady hitter during his career in the league, but this past season was his best. He started off leading the entire Show in batting average and hits for the Pittsburgh Pirates before the All-Star break and he was selected to the National League All-Star team for the first time in his career.
MLB・10 DAYS AGO
USA TODAY

MLB is adopting services from tech giant Adobe which they say will change how its fans enjoy baseball games, both at home and in the park.
MLB・10 DAYS AGO
95.7 The Game

The Giants have nearly filled out their starting rotation with veteran signings heading into the uncertain MLB labor limbo that looms Wednesday night.
MLB・2 DAYS AGO
martechseries.com

The New York Mets would appear to be a destination franchise in free agency. They have an owner who is not only looking to win a championship but is willing to spend whatever it takes to get there. New York is a major media market and a place where stars could get plenty of marketing opportunities.
MLB・9 DAYS AGO
Sportsnaut