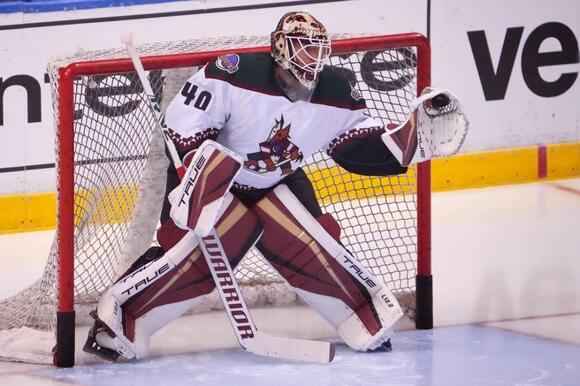 The Coyotes confirmed Hutton would not return. He played 20 minutes, stopping 10 of 11 shots, and Karel Vejmelka replaced him in net.

The game was tied at 1-1 when Hutton exited.

The Arizona Coyotes are coming off of another loss which extended their losing streak to three games and their total record to 1-13-1, putting them at last in the NHL by a decent margin. They’re now making their way to St. Louis to take on the Blues, who are also riding their own three-game losing streak.
NHL・14 DAYS AGO
nhltraderumor.com

Where will the Arizona Coyotes play next year?

Arizona Coyotes fans are starting to ask, where are we going to play next year? Their lease was not renewed in Glendale and currently they are without an arena to play in next year. Chris Johnston was on NHL Insider Trading and reports, the Coyotes are still working on a...
NHL・12 DAYS AGO
prohockeyrumors.com

As reported by AZCentral Sports’ Jose M. Romero, the Arizona Coyotes have officially activated forward Ryan Dzingel from injured reserve. The Coyotes originally placed Dzingel on injured reserve on October 27th with an upper-body injury. He’s missed the team’s last 10 games. Like much of the Coyotes squad this year,...
NHL・12 DAYS AGO
fiveforhowling.com

You have to give props to the Arizona Coyotes, they put up a great fight against the Columbus Blue Jackets on Thursday, but they lost. Again. Their record now sits at 2-13-2, good for dead last in the entire National Hockey League. They’ll meet the Detroit Red Wings in Arizona tonight before making their way to California to take on the Los Angeles Kings on Sunday.
NHL・10 DAYS AGO

The Arizona Coyotes have slowly gotten better as the season has gone on, and they earned their third win last night and now just trail the Seattle Kraken and Ottawa Senators by one. It’s probably a bittersweet feeling for Coyotes’ fans, who want Shane Wright but are also tired of watching an uninspired, losing team. Nonetheless, it’s great for team morale and the younger players, and they’ll look to build off of it with a win in California against the Los Angeles Kings.
NHL・9 DAYS AGO
sports360az.com

The NCAA and NHL hockey seasons are well underway, and Arizona’s lone representative in each league has soldiered through a less-than-ideal start. Different factors are in play in each situation, but the Arizona State Sun Devils and Arizona Coyotes are both facing potential playoff misses if they don’t right their respective ships.
HOCKEY・8 DAYS AGO
oilersnation.com

Chomp, chomp, chomp. The injury bug has taken three bites out of the Edmonton Oilers defence group in the past three games, and suddenly Edmonton’s depth will be put to the test. — Darnell Nurse leads the Oilers blueline averaging 20:20/game at 5×5. Duncan Keith was second entering last night’s...
NHL・6 DAYS AGO
AZCentral | The Arizona Republic

One of the first things that can be wrecked for teams during long losing streaks are chemistry and locker room camaraderie.  But the Coyotes made sure that wasn't the case during their 11-game losing streak to open the season, and after they recently put together three wins and an overtime loss over four games, things continue to be...
NHL・6 DAYS AGO

The Dallas Stars were able to conquer the backend of a back to back game situation and win 3-2 against the Arizona Coyotes. This was the fourth win in a row for Dallas which is one of their longest winning streaks this season. Heres how the Stars did without Jake Oettinger between the pipes tonight.
NHL・2 DAYS AGO
arcticicehockey.com

The Winnipeg Jets and Arizona Coyotes are playing tonight which explains why today was so warm outside. The Coyotes are bad, but the Vancouver Canucks are bad as well and they beat the Jets so that means nothing to them. Instead, the Jets have to make sure they are ready to go from puck drop and not let the Coyotes get any hope.
NHL・1 DAY AGO
visitsaintpaul.com

On November 30, 2021, the Minnesota Wild will play against the Arizona Coyotes at the Xcel Energy Center in Saint Paul.
NHL・1 DAY AGO
Sportsnaut

Jordan Greenway had a goal and two assists, Kirill Kaprizov scored and Kaapo Kahkonen made 29 saves as the Minnesota Wild beat the Arizona Coyotes 5-2
NHL・5 HOURS AGO
inquirer.com

Flyers defenseman Ryan Ellis out 4-6 weeks with lower-body injury, according to Alain Vigneault

Flyers coach Alain Vigneault revealed Thursday that defenseman Ryan Ellis will likely be out four to six weeks with a lower-body injury. The Flyers announced Wednesday that Ellis had been placed on injured reserve. The offseason acquisition has missed 10 of the last 11 games and was reinjured Saturday against Dallas in his return to the lineup.
NHL・12 DAYS AGO
theScore

New York Islanders defenseman Ryan Pulock will miss the next four-to-six weeks with a lower-body injury, the team announced Wednesday. The 27-year-old seemed to be in pain after blocking a shot and then limping to the bench during the second period of Monday's clash against the Tampa Bay Lightning, according to The Athletic's Arthur Staple. He played just over two minutes in Monday's final frame and didn't suit up for Tuesday's 6-1 loss to the Florida Panthers.
HOCKEY・13 DAYS AGO
nhltraderumor.com

Arizona Coyotes are tanking in the hopes of drafting Shane Wright

It is looking like the Arizona Coyotes are following the steps of the Toronto Maple Leafs in tanking a season in hope of getting the best odds to draft Shane Wright, the top rated prospect in the upcoming 2022 NHL draft. With the new draft rules, if the Coyotes were...
NHL・12 DAYS AGO
Arizona Sports

The Arizona Coyotes announced on Thursday that defenseman Conor Timmins had successful knee surgery and is done for the remainder of the 2021-22 season. The 23-year-old Timmons was selected No. 32 overall in 2017 by the Colorado Avalanche and averaged 17:44 minutes of ice time in six games for the Coyotes this year.
NHL・12 DAYS AGO
NHL

The Tampa Bay Lightning are without superstar center Brayden Point tonight against the Minnesota Wild at AMALIE Arena to wrap up a weekend back-to-back set. How long Point will be out remains to be seen. Point didn't take part in warmups prior to the contest against the Wild, and his...
NHL・9 DAYS AGO
theScore

Get to know the newest Islanders defenseman as he made his NHL debut. Grant Hutton made his NHL debut on Saturday night at UBS Arena. Get to know Hutton as in the latest edition of 7 Facts. PLAYED COLLEGE HOCKEY AT MIAMI. Prior to his professional hockey career, Hutton spent...
NHL・9 DAYS AGO