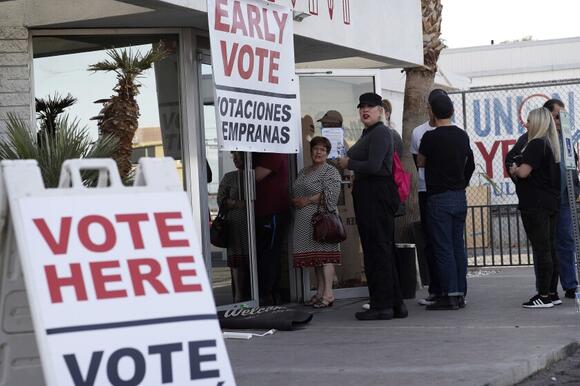 Days after the November 2020 election, Kirk Hartle appeared on Las Vegas television, his brow furrowed and voice tinged with disbelief.

Someone, he said, had intercepted the ballot mailed to his wife, Rosemarie, and cast it in her stead. Rosemarie Hartle died of breast cancer in 2017.

"That is pretty sickening to me, to be honest with you," Hartle told KLAS-TV.

For President Trump, his campaign surrogates and their champions in the conservative media, it was an outrage and, they claimed, a mere hint of the widespread fraud that cost Trump not just Nevada's six precious electoral votes but a second term in the White House .

"Dead people voted in Clark County," Matt Schlapp, chairman of the American Conservative Union and one of Trump's loyal foot soldiers, asserted at a nationally televised Las Vegas news conference. He cited the case of Rosemarie Hartle as just one example.

(The appearance by Schlapp and others trying to undermine Democrat Joe Biden and tarnish the election was less a news conference than a political piece of performance art. The several Trump allies who spoke, including his Nevada campaign chairman, Adam Laxalt, refused to take questions and offered no evidence to support their groundless fraud claims.)

Last week, the state's Democratic attorney general, working with Nevada's Republican secretary of state, announced that investigators had cracked the case. Hartle, 55, was charged with two counts of fraud: voting more than once in the same election and voting using another person's name. He allegedly forged his late wife's signature to cast the ballot she'd been sent.

Hartle is due in court next month and "looks forward to responding to the allegations,” his attorney said. Both charges are felonies, each punishable by a prison term up to four years and a fine up to $5,000.

It's uncertain who Hartle voted for — evidently twice — but one can make an educated guess. He is a registered Republican and the chief financial officer of Ahern Rentals, a heavy-equipment leasing firm in Las Vegas whose owner, Don Ahern, is a prominent Trump supporter.

One of Ahern's companies was fined $3,000 for violating COVID-19 restrictions at a September 2020 Trump rally in Henderson, Nev. Over the weekend, Ahern's hotel off the Las Vegas Strip hosted a QAnon-flavored convention where speakers spouted the usual voter-fraud and anti-vaccination conspiracies.

Voter fraud is, of course, the bloody shirt waved by Trump, his enablers and some of the former president's more deluded followers. It not only explains away his clear-cut and irrefutable loss to Biden but is used as a rallying cry for Trump's talked-about 2024 campaign and the justification for Republican-passed laws to make voting more difficult, especially for minorities and young people.

In Nevada, attorneys for Trump filed a lawsuit claiming, among other things, that at least 500 votes were invalidly cast on behalf of dead people. Nevada Republicans, who promoted Hartle's television interview, put the number at more than 1,500 and chided the media for failing "to understand we are finding concrete cases of voter irregularities that they must expose." (Biden won the state by 33,596 votes, out of 1.4 million cast.)

The lawsuit was dismissed, one of dozens the Trump campaign filed nationwide that were found to be meritless and thrown out of court.

Though oft-repeated, it bears stating once again: There is no evidence of rampant voter fraud.

"Fraud is very rare," the Brennan Center for Justice has found, and "voter impersonation is virtually nonexistent."

If that organization is too left-leaning for your tastes, the conservative Hoover Institution issued its own extensive report, based on statistical analysis, that debunked Trump's claims the 2020 election was manipulated or stolen.

Since Hartle was charged, there has been no word from the Nevada Republican Party or public response from Schlapp or from Laxalt, who is seeking the Republican nomination to challenge Democratic Sen. Catherine Cortez Masto in next year's election.

Those eager to sow poisoned seeds, to delegitimize a free and fair election and strike at one of our most vital democratic foundations, have nothing to say when, it appears, those attacks were based on deceit.

That is pretty sickening, to be honest with you.

if it had been a Democrat getting caught voting twice , you can bet Republicans in Congress would be trying to decertify the election results and fox news would be all over it .

As far as I know!! The only reported election fraud that was found since the election were people that used dead family members mail in ballots and voted for Trump!!! This a fact.

Former President Trump faces a number of investigations beyond the Jan. 6 probe that could come to a head in the coming weeks and new year.
POTUS・3 HOURS AGO
Los Angeles Times

'Gimme Shelter': Sacramento plans to give homeless residents the right to housing

Sacramento Mayor Darrell Steinberg pushes a plan to dramatically expand shelter programs in an effort to give people a legal right to housing.
LOS ANGELES COUNTY, CA・1 HOUR AGO