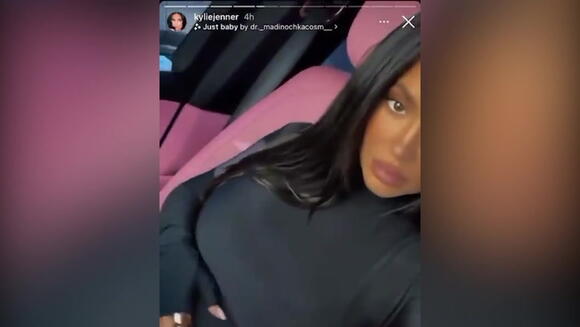 Kylie Jenner has again come under fire for accusations of “blackfishing” after sharing a selfie video on her Instagram stories with a noticeably darker skin tone .

The cosmetics mogul and Keeping Up With the Kardashians star received backlash after posting the video on Sunday.

In the clip, she can be seen listening to Smoke by Don Toliver featuring HVN and SoFaygo in a car. She gazes into the camera before revealing her look for the day and placing her hand on her pregnant stomach.

Viewers immediately noticed that the 24-year-old’s skin complexion was darker than usual.

The accusations of blackfishing became more apparent once the video was shared on Twitter. Blackfishing is a form of cultural appropriation and Blackface is where a person purposefully wears a stronger shade of makeup or edits their photos to make it appear like they have darker skin.

Almost all of the replies to the tweet, in some way, accuse Jenner of blackfishing with some also comparing her to Rachel Dolezal, the woman who pretended to be Black, and Jesy Nelson, the Little Mix singer who was also accused of blackfishing earlier this month and was controversially defended by Nicki Minaj .

In March 2020 , Jenner faced similar accusations when people felt that she was attempting to copy Beyonce in a series of Instagram photos.

Her sister Khloe Kardashian was also accused of blackfishing after she used a black emoji skin tone in a tweet.

Jenner is yet to respond to the accusations.

So what? Blackfishing? 🙄 come on…so I guess when black girls put blond weave in their hair we could say they’re “whitefishing” 👌🏻 got it!

Khloe Kardashian isn’t letting COVID hold her back. She is posting new photos on Instagram and they are totally showing off her body. Needless to say, she looks stunning. Former Keeping up with the Kardashians star, Khloe Kardashian, is showing off her body on her social media platform. Khloe is wearing an interesting bodysuit that sort of resembles a morph suit. The outfit covers her entire body. It includes swirls of black, white, and brown in the interesting design. Not only that, but the ensemble seems to be a bit see-through. While she isn’t really revealing anything, she is certainly alluding to it.
TV SHOWS・24 DAYS AGO
The Hollywood Gossip

Khloe Kardashian has been in the public eye for her entire adult life. So she's equipped herself to handle the slings and arrows that are hurled at her daily by a never-ending procession of vicious trolls. But Khloe's daughter didn't ask to be born into a life of non-stop scrutiny...
CELEBRITIES・10 DAYS AGO
AOL Corp

Kendall Jenner’s scanty wedding attire has social media up in arms: ‘Blatantly disrespectful to the bride'

Social media is in a frenzy over the dress Kendall Jenner chose to wear to her friend’s wedding. Decode and demystify Gen Z's latest online slang terms with In The Know's new glossary. On Nov. 11, the 26-year-old model attended her friend Lauren Perez’s wedding with a slew of other...
BEAUTY & FASHION・20 DAYS AGO
Page Six

Kanye West’s new girlfriend, Vinetria, didn’t have the nicest things to say about his good pal Travis Scott before they started dating. During an Instagram Q&A in January 2020, a fan asked the model to name the “worst artists out now,” to which she responded, “Um idk. Travis Scott is annoying.”
CELEBRITIES・24 DAYS AGO

Watch: Kim & Khloe Discuss Where the Family Stands With Caitlyn Jenner. Things could be better between Caitlyn Jenner and her ex-wife, Kris Jenner. During Monday night's episode of Big Brother VIP, the Keeping Up With the Kardashians alum gave an emotional update about their relationship. "I would say from my standpoint, our relationship is not as good as it should be," the Olympian told her housemates. "I don't have any hard feelings towards her. I wish it was closer, but it's not."
CELEBRITIES・24 DAYS AGO
TVShowsAce

Caitlyn Jenner sparked the Kardashian pregnancy rumors. The proud grandmother said there are two grandkids on the way. The aspiring politician made an appearance on Good Morning Britain where she may have accidentally spilled the beans. Apparently, she dropped some MAJOR news during the interview. Caitlyn was nervous or so...
CELEBRITIES・11 DAYS AGO
Insider

Tessica Brown, known online as the "Gorilla Glue girl," released a rap song on Friday. On "Ma Hair," Brown raps about how she made a TikTok and flew to Los Angeles to fix her hair. Brown's agent reportedly told TMZ that she wanted Nicki Minaj to hop on the song.
MUSIC・10 DAYS AGO
Life and Style Weekly

Scott Disick Gets Flirty With Khloe Kardashian After Kourtney’s Engagement to Travis Barker: ‘So Gorg’

Getting flirty? Scott Disick gave Khloé Kardashian a compliment about her looks three weeks after Kourtney Kardashian’s engagement to Travis Barker. “Sorry, but not sorry @khloekardashian is so gorg,” Scott, 38, wrote in an Instagram Story on Saturday, November 6. The Talentless brand founder had his arm wrapped around the Keeping Up With the Kardashians alum’s shoulder in a selfie.
CELEBRITIES・25 DAYS AGO

As TV Shows Ace previously reports, Kourtney Kardashian’s daughter, Penelope Disick, has a secret Tik Tok. Now, there are reports of lots of red flags on the TikTok account. Keep reading to find out about this and more. Is Penelope’s Situation Different From Brother, Mason’s. TV Shows Ace previously shares...
BEHIND VIRAL VIDEOS・9 DAYS AGO
Life and Style Weekly

Happy birthday, Corey Gamble! Kim and Khloé Kardashian posted sweet tributes for Kris Jenner’s boyfriend’s big day, and it proves he’s become a mainstay in the famous family. “Love to all. I turned 41 today, and I’m thankful for it all. Self-love is the truth!” the music manager wrote via...
CELEBRITIES・22 DAYS AGO
US Magazine

Supportive! Kim Kardashian is still exploring her relationship with Pete Davidson, but he has already won over her famous family. “The family is happy for Kim, and they really have taken a liking to Pete,” a source exclusively tells Us Weekly. “A lot of the Kardashians met him in the past and have hung out with him, so he’s not like this new stranger that just entered into their lives. They think he’s funny and is fun to be around. He’s someone that just lightens the mood in the room.”
CELEBRITIES・13 DAYS AGO
Cosmopolitan

It's all go in the Kardashian-Jenner family right now (when is it not?). Kylie Jenner is expecting baby no.2, Kourtney Kardashian and Travis Barker are engaged and that's before we've even begun to think about Khloe, Kim and Kendall. Well, it looks like there could be more dramatic news on the horizon, after fans' recent theory that Kylie accidentally posted a picture of a wedding ring on Instagram.
CELEBRITIES・29 DAYS AGO

Kourtney Kardashian and fiancé Travis Barker are officially the PDA couple of 2021 – and they don’t seem to be slowing down anytime soon. The couple attended their friend Simon Huck’s wedding at the weekend when the Keeping Up with the Kardashians star straddled her husband-to-be while Blink-182’s All the Small Things blasted through the speakers. Comedian and author Claudia Oshry caught the moment on camera and shared the clip to her Instagram Story.
CELEBRITIES・17 DAYS AGO
Fox News

Kylie Jenner broke her silence about the tragedy that occurred at boyfriend Travis Scott’s Astroworld Festival in Houston that left eight people dead. Jenner, who is expecting her second child with Scott, took to her Instagram Story on Saturday to share her condolences with the families of the victims. She also made sure to note that Scott was not aware of the gravity of the situation happening in the crowd when he decided to continue on with the show.
CELEBRITIES・25 DAYS AGO
Fox News

After weeks of remaining mum on social media, Kylie Jenner gave fans a peek at her holiday decor. The Kylie Cosmetics founder shared with her 284 million followers a short clip to her Instagram Story of a handmade wooden pyramid spinning on her countertop. A reindeer figurine and an illuminated Christmas tree could be seen in the background.
CELEBRITIES・5 DAYS AGO
TMZ.com

'Gorilla Glue Girl' is sticking it to us with more chatter about her hair fiasco -- only now, she's doing it with a beat, and she's recorded it ... notably without an assist from Nicki Minaj. Tessica Brown is releasing her very own track, remixing snippets from her original viral...
CELEBRITIES・14 DAYS AGO
TVShowsAce

Kylie Jenner is trying to get into the Christmas spirit. The Keeping Up with the Kardashians star was spotted decorating her large home alone. This comes amid the ongoing Astroworld tragedy. Her boyfriend Travis Scott made his first public appearance in Palm Springs. TV Shows Ace previously reported that the...
TV SHOWS・4 DAYS AGO
MarketRealist

Though Not a Billionaire, Kylie Jenner Still Has an Impressive Net Worth

Kylie Jenner may have debuted in the public eye as a 10-year-old on Keeping Up With the Kardashians, but her fame and net worth have skyrocketed through her own efforts. At age 24, Jenner has already bought and flipped real estate and developed (and sold) her popular cosmetics line for a whopping $600 million. What's the entrepreneurial reality star's net worth today?
CELEBRITIES・14 DAYS AGO
Life and Style Weekly

A mogul in the making? Travis Barker‘s daughter, Alabama Barker, revealed she’s launching a makeup line!. “If you made a makeup line, I would literally buy every product x2,” one fan commented on a since-deleted TikTok on Tuesday, November 30. “I am, babe,” Alabama, 16, replied with several cute emojis. “Bama’s future: the [studio], a makeup line and big bands,” another fan wrote — and the teenager “liked it.”
ALABAMA STATE・1 DAY AGO
E! News

Watch: North West Roasts Kim Kardashian for "Talking Different" on Instagram. Kardashian fans one more thing to be thankful for this Thanksgiving!. On the U.S. holiday on Nov. 25, Kim Kardashian and her 8-year-old daughter North West, the eldest of her and ex Kanye West's four children, launched the ultimate mother-daughter collab, a joint TikTok channel, to highlight their sweet bond and further document their adorable hijinks.
BEHIND VIRAL VIDEOS・6 DAYS AGO