#The Washington Post#Trump And Pence 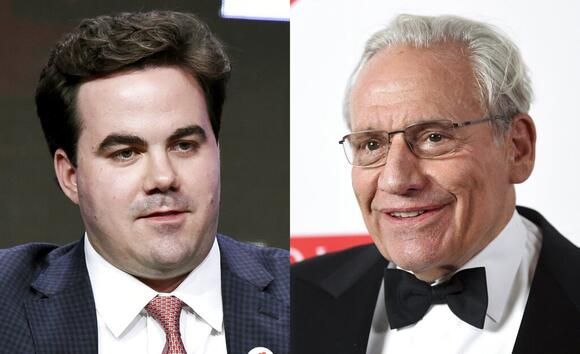 F ormer President Donald Trump reportedly called into a “war room” at the Willard hotel in Washington, D.C., on the eve of the Capitol riot on Jan. 6.

Washington Post reporter Robert Costa, who appeared for an interview Monday with Watergate sleuth Bob Woodward, his colleague and co-author of their new book Peril , said this call to advisers Steve Bannon , Rudy Giuliani, and John Eastman on Jan. 5 raises questions about the extent of White House involvement in conversations about efforts to overturn the results of the 2020 election and beyond.

These Trump allies, who set up a so-called "command center" at the Willard, according to the Washington Post, were focused on finding a legal strategy to block or delay the certification of Joe Biden's 2020 victory, pinning their hopes on Vice President Mike Pence.

Costa, who said he was outside the hotel that night and saw Proud Boys and Oath Keepers gathered there, said the call from Trump to the "command center" happened shortly after Trump and Pence had a one-on-one meeting the night of Jan. 5 when Pence informed the president that he didn't have the power to reject electoral votes. The vice president also informed Congress of this conclusion.

“That night was eerie because we didn't know at the time that Trump's over at the White House, pounding into Pence in the one-on-one Oval Office meeting, and then after it doesn't go well for Trump, he calls into the Willard war room" Costa said. "That it's not just a Willard war room happening in an isolated way across the street. The president is calling in, Trump's calling in.”

“He's coordinating this effort to speak for Pence,” Costa continued. “Remember, late at night as you detailed earlier, Trump's issuing a statement saying, Pence agrees with me. He's effectively taking over the vice presidency, at least in terms of the public message. And this is all just hours before the insurrection."

Woodward said they spoke to a Republican former head of the Criminal Division in the Justice Department who said Trump may have violated 18 U.S. Code, section 371 , which states that two or more people who work together “to commit any offense against the United States” are guilty of conspiracy .

“I'm sorry this sounds technical, but it is a law that says it's a crime to defraud the government in any deceptive way, and that's exactly what they did here," Woodward said.

Trump told Fox News in June that he and Pence maintain a "good relationship," even after the 45th president criticized his former No. 2 for lacking the "courage" to stop lawmakers from certifying the Electoral College vote in favor of now-President Joe Biden, a process disrupted by rioters who stormed the U.S. Capitol on Jan. 6.

Trump was impeached by the House on a charge of inciting the Jan. 6 siege of Congress but was acquitted by a GOP-led Senate despite seven Republicans voting to convict him.

A House select committee is now investigating the planning around the events of Jan. 6.

Rep. Liz Cheney, a Republican member of the Jan. 6 panel, said arguments made by Trump and Bannon that relevant information sought by the committee is protected by executive privilege "appear to reveal" that Trump was "personally involved in the planning and execution" of the events on Jan. 6.

Rep. Bennie Thompson, a Mississippi Democrat who is the chairman of the House Jan. 6 Select Committee, said during a Sunday interview on CBS "there's no question" when asked about how premeditated was the Capitol attack and he mentioned a subpoena against Bannon. Last week the House voted to refer him to the DOJ for contempt of Congress for not cooperating.

"Clearly, the direction of the committee is to look at that premeditation, to make sure that we identify it, but the worst kept secret in America is that Donald Trump invited individuals to come to Washington on Jan. 6. He said, 'All hell' would break loose. Steve Bannon was part of the conversation and the promotion of Jan. 6. The very podcast you — we just listened to talks about it. Steve Bannon was in the war room and he was in the Willard hotel doing a lot of things. So that's why we subpoenaed him," Thompson said .

If the DOJ prosecutes Bannon and he is convicted, he could face fines up to $100,000 and up to a year in prison. Woodward predicted last week the DOJ will go further and appoint a special counsel to investigate the "massive Watergate-style attempt to destroy the process of electing a president."

It's not surprise at all. Trump wanted to stay in power for 4 more years & more. Jan.6 was a coup attempt. No question about that. Subpoena the phone record from the Trump White House on Jan.5 & 6. !!!

Once a connection is made between Trump and his accomplices with the oath keepers and other extremists who violently attacked the Capitol, it’s over for them.

Conspiracy! And you wonder why we say white power is sour when exposed. 🇺🇸n made On full display 👁 👁 🌡🙄🤑🤮 White man white man who do you think you are? Treasonous behavior against your own white government. 🤪😂🤣 🖕

A federal judge set July 18 as a tentative date for the trial of Steve Bannon over contempt of Congress charges on Tuesday.
WASHINGTON, DC・16 HOURS AGO
WashingtonExaminer

A top Trump aide gave "real-time communications" during the Jan. 6 riot at the U.S. Capitol to House investigators.
CONGRESS & COURTS・7 HOURS AGO
Reuters

WASHINGTON, Dec 7 (Reuters) - Mark Meadows, who served as former President Donald Trump's White House chief of staff, has decided not to cooperate with the congressional committee investigating the deadly Jan. 6 U.S. Capitol riot, and the panel said on Tuesday it is prepared to pursue contempt charges against him.
POTUS・14 HOURS AGO

BREAKING — A federal judge today set a July 18 date for STEVE BANNON’s trial for contempt of Congress, Kyle Cheney reports. The date essentially splits the difference between the Justice Department’s request for April 15 and Bannon’s ask for Oct. 22. — What this means for the Jan. 6...
U.S. POLITICS・18 HOURS AGO
WashingtonExaminer

Former President Donald Trump wants his political team to start preparing for a 2024 run to win a second term “denied him,” according to former staff chief and current top adviser Mark Meadows.
PRESIDENTIAL ELECTION・23 HOURS AGO
The Atlantic

He Voted to Impeach. Can He Survive in the GOP?

Late at night on the second Tuesday of January, Peter Meijer, a 33-year-old freshman congressman from West Michigan, paced the half-unpacked rooms of his new rental apartment in Washington, D.C., dreading the decision he would soon have to make. Six days earlier, Meijer had pulled a smoke hood over his...
CONGRESS & COURTS・1 DAY AGO
Newsweek

At the current COVID-19 death rate, the number of American lives lost under Biden could exceed those under Trump in a few weeks.
PRESIDENTIAL ELECTION・1 DAY AGO

How can the people who have seen the worst of Trump still think the best of him?

A casual consumer of the news could be forgiven for thinking that former White House chief of staff Mark Meadows had broken with former president Donald Trump last week. News stories touted Meadows’s revelation in a new memoir that Trump had concealed a positive test for the coronavirus three days before his first debate with Joe Biden. Meadows also announced a newfound willingness to cooperate with the House committee investigating the Jan. 6 insurrection.
POTUS・1 DAY AGO
The Guardian

It is a festive family photo with seven broad smiles and a Christmas tree. But one other detail sets it apart: each member of the Massie family is brandishing a machine gun or military-style rifle. The photo was tweeted last week by Thomas Massie, a Republican congressman from Kentucky, with...
POTUS・1 DAY AGO
WashingtonExaminer

Capitol riot investigators have found evidence possibly linking the Trump White House to the Justice Department in efforts to overturn the results of the 2020 election.
GEORGIA STATE・1 DAY AGO
MSNBC

It was on May 9, 2017, when Donald Trump fired James Comey as the director of the FBI. The Republican president hadn't yet been in office for four months, but he nevertheless ousted Comey six years before the end of his 10-year term. A few days later, Trump sat down...
POTUS・1 DAY AGO

#The Washington Post#Trump And Pence
The Guardian

The congressman was in the Capitol the day it was stormed by Trump supporters, and led the impeachment prosecution. The fight, he says, is far from over. Chris Bryant: ‘Nearly everyone I meet says: “I wouldn’t want your job”’. He spent 5 January at a graveside service for his son,...
CONGRESS & COURTS・2 DAYS AGO
The Guardian

The double negative, a common grammatical elephant trap, claimed a high-profile victim on Saturday night. Donald Trump. In a statement, the former president said: “Anybody that doesn’t think there wasn’t massive election fraud in the 2020 presidential election is either very stupid, or very corrupt!”. There was no massive election...
PRESIDENTIAL ELECTION・2 DAYS AGO
WashingtonExaminer

In a blurb on the cover of Mark Meadows’ new book, Donald Trump calls the former congressman a “great chief of staff – as good as it gets” and predicts “a great future together”. The former president has also promoted the book to his followers. Now the book is in...
POTUS・3 DAYS AGO
Business Insider

John Eastman is the second witness who has invoked or plans to invoke the Fifth Amendment in response to a January 6 committee subpoena.
PRESIDENTIAL ELECTION・4 DAYS AGO
WashingtonExaminer

The House committee investigating the Jan. 6 Capitol riot agreed to delay its deposition of former Justice Department official Jeffrey Clark, whose attorney said he is dealing with a medical condition that prevented him from showing up this weekend.
CONGRESS & COURTS・4 DAYS AGO
Newsweek

Trump called it "not true" that Melania is enjoying private life and isn't interested in returning to Washington, D.C.,
PRESIDENTIAL ELECTION・5 DAYS AGO