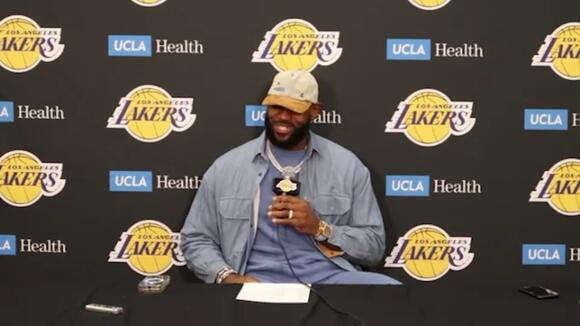 LeBron James is only 36 years old but he got a bit of a reality-check about what that means for an athlete during Sunday's Lakers game against the Memphis Grizzlies. About seven minutes into the first quarter, the Grizzlies sent rookie guard Ziaire Williams onto the floor. Williams, now 20, was a high-school teammate of LeBron's son Bronny at Sierra Canyon in Chatsworth in 2019-2020. It was only about 18 months ago that LeBron was cheering on Ziaire and Bronny as they led the school to the division title. 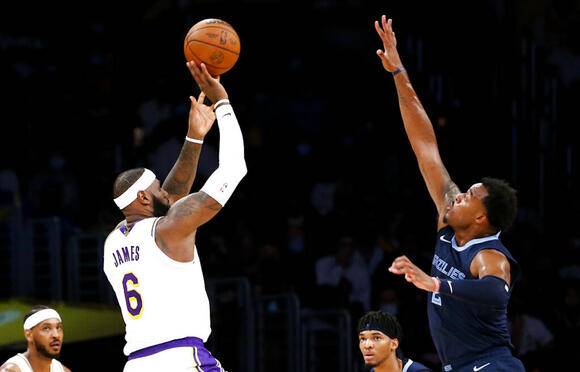 Williams went on to play for Stanford for a single season and was drafted to the NBA earlier this year. Now he's playing on the same floor against his former teammate's father, who happens to be one of the best players in the world. "I looked at Ziaire a couple times and I was just shaking my head inside," James said after Sunday's game. "Just remembering a year and a half ago, not even a full two years he was hitting the game-winner to send them to the state championship alongside my son." "It's a weird dynamic for myself to see something like that. But happy for the kid obviously." "But definitely I had a moment for sure." It may only be a few years before LeBron has an even bigger moment. Bronny, now 17, is considered one of the top high-school prospects in the country. It could be only a few years before he, too, enters the NBA draft and perhaps gets a chance to take the floor against, or with, his dad.

The Los Angeles Lakers are in the midst of a roller-coaster campaign that, for the most part, has not lived up to the expectations. Los Angeles is 7-6 on the season and has been incredibly disappointing so far, especially for Lakers fans. Every loss in La La Land is magnified. But their ugly 107-83 defeat to the Minnesota Timberwolves at home on Friday night deservingly warranted the negative headlines and the boos from the Staples Center crowd.
NBA・19 DAYS AGO
ClutchPoints

Boston Celtics big man Enes Kanter recently made headlines after he went on an all-out attack on Los Angeles Lakers superstar LeBron James and his alleged ties to China. Unsurprisingly, Kanter has United States Senator Ted Cruz backing him in his corner as the outspoken Republican also went on an unfiltered tirade against LeBron.
NBA・11 DAYS AGO
firstsportz.com

While the NBA Players are known to work their way in the gym, day-in and day-out, they are also known for dawning the most outrageous style and Kyle Kuzma’s pre-game outfit in Washington Wizards latest game against the Charlotte Hornets only goes to justify the same. As a result, of which many NBA stars also commented upon the same.
NBA・10 DAYS AGO
ClutchPoints

A lot of people from in and around the NBA have chimed in on the incident involving Los Angeles Lakers superstar LeBron James and Isaiah Stewart of the Detroit Pistons. LeBron got ejected for just the second time in his career for a supposed inadvertent blow to Stewart’s head that left the youngster’s face all covered in blood.
NBA・8 DAYS AGO

Former NBA star Kenyon Martin enjoyed seeing his son, Kenyon Martin Jr., go up against one of his former teammates recently. When asked about Martin Jr. and the Rockets facing Carmelo Anthony and the Los Angeles Lakers on Sunday and Tuesday, K-Mart told TMZ Sports: "It was dope. Strange feeling at first but testament to Melo for one. ... His longevity in his craft. Still playing at a high level."
NBA・26 DAYS AGO
fadeawayworld.net

Lonzo Ball On Being Traded From The Lakers: "It Was Anthony Davis, So There Was No Shame In That."

A 24-year-old Lonzo Ball is on his third team in five seasons. After being traded from the Lakers in 2019, he found himself in New Orleans where he helped Zion Williamson and Brandon Ingram compete for the Pelicans. Now, 'Zo is in Chicago and although he's only played 13 games,...
NBA・17 DAYS AGO
fadeawayworld.net

Kendrick Perkins Says Russell Westbrook Must 'Stand Up' To LeBron James: "You Have To Be Like Rajon Rondo Is To LeBron James And Say, 'Move Out The Way, I Got It."

The fit was a serious topic coming into the 2021-22 season after the Los Angeles Lakers acquired Russell Westbrook through a blockbuster five-team trade. Of course, LeBron James is not a traditional point guard, but more often than not, he runs the offense. Undoubtedly, Westbrook has not had the ball...
NBA・1 DAY AGO
Washington Post

Los Angeles Lakers forward LeBron James will be sidelined indefinitely after entering the NBA’s coronavirus health and safety protocols. The 36-year-old James, who has missed time this season with ankle and abdominal injuries, will be out for the Lakers’ game against the Sacramento Kings on Tuesday. Per the league’s protocols...
NBA・2 DAYS AGO

A photo of LeBron James watching the fight between the Los Angeles Lakers and the Detroit Pistons is going viral on social media. Tensions boiled over for the Lakers and the Pistons on Sunday evening and LeBron was right in the mix of things. James was ejected from the contest...
NBA・11 DAYS AGO
fadeawayworld.net

Would The Knicks Accept This Trade Offer From The Lakers? Russell Westbrook And DeAndre Jordan For Kemba Walker, Evan Fournier, Kevin Knox, And Nerlens Noel

Throughout an NBA season, we often see various media outlets propose hypothetical trades. Of course, not all of those hypothetical trades come to fruition, but there are times where real trades with a similar framework to a proposed trade do end up happening. There has been a recent trade proposed...
NBA・4 DAYS AGO
Black Enterprise

Potentially enlarging his ownership holdings big time, LeBron James and the Fenway Sports Group (FSG) announced plans to acquire the Pittsburgh Penguins. The group has agreed to purchase a controlling stake in the National Hockey League team. The sale calls for FSG to spend about $900 million, Sportskeeda reported. The...
NBA・1 DAY AGO
Sportsnaut

Bookmark. Save. Do your thing. We will be providing constant updates on this page as it relates to the biggest
NBA・1 DAY AGO

DeAndre Jordan appears to be on his way to getting DeMoted by the Los Angeles Lakers. Lakers head coach Frank Vogel told reporters this week that Dwight Howard will start for the team Friday against the LA Clippers. Vogel also said that the team will only use one center moving forward, per Harrison Faigen of Silver Screen and Roll.
NBA・9 HOURS AGO
WJW FOX 8 News Cleveland

(WJW/AP) – LeBron James tweeted out that “something is REAL” fishy the day after he was placed in the NBA’s health and safety protocols and ruled out of Tuesday’s game against the Sacramento Kings. According to reports from TMZ Sports, James tested positive for COVID-19. The reports said he was asymptomatic. James took to Twitter […]
NBA・1 DAY AGO
Sporting News

LeBron James has been fined $15,000 by the NBA for a provocative dance celebration during Wednesday's win over the Indiana Pacers. NBA League Pass: Sign up to unlock live out-of-market games (7-day free trial) James broke out the celebration after hitting a three-pointer late in the fourth quarter. He scored...
NBA・6 DAYS AGO
fadeawayworld.net

Whenever the Los Angeles Lakers and Los Angeles Clippers match up, there is always some excitement from fans worldwide, but also in the city of Los Angeles. Those two are generally considered big-market teams who are city rivals, and with that comes a lot of attention. While the Lakers-Clippers game...
NBA・8 HOURS AGO
Lakers Daily

Enes Kanter Freedom on helping LeBron James: ‘I don’t know if he’s educated enough, but I’m here to educate him’

Watch LeBron James Get Fans Ejected From The Lakers-Pacers Game

During the Los Angeles Lakers 124-116 win over the Indiana Pacers in Indianapolis on Wednesday night, a few fans got ejected from the game. What's even more interesting is the fact that LeBron James actually led the referees to the fans to show them who should be ejected. The clip...
NBA・8 DAYS AGO
Yardbarker

Most NBA teams are approaching the quarter mark of the 2021-2022 campaign. If the season were to end on Wednesday, the star-studded Los Angeles Lakers would take part in the play-in tournament for the second straight time. As they approach the Thanksgiving holiday, the Lakers are a disappointing 9-10 and only percentage points ahead of the typical laughingstock of the league, the Minnesota Timberwolves, for ninth place in the Western Conference.
NBA・8 DAYS AGO
Popculture

LeBron James was ejected on Sunday after bloodying Detroit Pistons center Isaiah Stewart in the third quarter. Stewart had to be held back by Pistons staff and teammates, breaking away to come after James several times while blood streamed down his face. James was ejected for his role in the...
NBA・11 DAYS AGO