Two months after US withdrawal, some 300 Americans still in Afghanistan 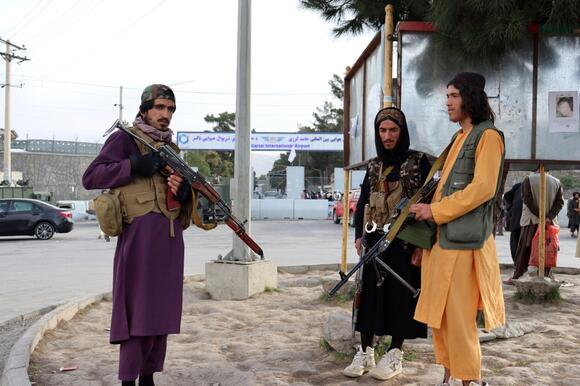 That number is nearly triple the federal government’s original estimate.

The Biden administration and Pentagon says they are working to get those Americans out of Afghanistan.

“We are aware of concerns that some of our members have about their family members, absolutely,” Department of Defense press secretary John Kirby said. “(There is an) interagency effort to find safe passage for these individuals to the best of our ability.”

But he said the repatriation efforts will not lead the U.S. to send troops back to Afghanistan.

Instead, the U.S. Department of State is relying on diplomatic agreements with the Taliban, with press secretary Ned Price saying the U.S. is insisting the Taliban uphold “the right of free passage for those who wish to depart Afghanistan.”

Kirby added that U.S. partners in the region will be key in evacuating Americans.

That’s not good enough for Republicans on Capitol Hill, who continue to slam the Biden administration’s exit strategy.

“Hundreds of Americans are still in Afghanistan. Meanwhile, President (Joe) Biden and Democrats are trying to cram through trillions in new tax hikes,” Rep. Greg Murphy, R-S.C., said on the House floor.

“What are their priorities? A new gender strategy,” he added. “Are you kidding me?”

The U.S. also continues to work with nonprofits to help thousands of Afghan refugees who fled their homeland as the U.S. pulled out and the Western-backed Afghan government crumbled before the Taliban.

Iranian border guards clashed with Taliban forces along the Iran-Afghanistan border on Wednesday after the Taliban opened fire on Iranian farmers, according to reports. Local journalist Reza Khaasteh shared unverified video of the scene on Twitter, which appeared to show Iranian soldiers using heavy artillery to push back against the Taliban militants.
PUBLIC SAFETY・1 DAY AGO
CBS News

In this episode of "Intelligence Matters," host Michael Morell speaks with Zalmay Khalilzad, former U.S. ambassador to the U.N. under President George W. Bush and special representative for Afghanistan reconciliation from September 2018 to October 2021. Khalilzad and Morell discuss the history of U.S. engagement in Afghanistan, including in the period during the withdrawal of Soviet forces in 1989, after 9/11, and today. Khalilzad offers new details about the deal his team brokered with the Taliban in 2020 - including the contents of two still-secret annexes - and explains why he believes diplomatic engagement with the Taliban should continue. Khalilzad also reflects on the U.S. withdrawal from Afghanistan as well as his own role as lead negotiator under Presidents Trump and Biden.
U.S. POLITICS・1 DAY AGO
AFP

Taliban urges US to release frozen funds in Doha talks

The Taliban renewed its call for the United States to release billions of dollars in frozen funds after two days of talks in Doha as aid-dependent Afghanistan grapples with economic crisis. The Afghans also called for an end to blacklists and sanctions in meetings led by Taliban Foreign Minister Amir Khan Muttaqi and Tom West, the US special representative for Afghanistan. It was the second round of talks between the two sides in Qatar since the US ended its 20-year occupation of Afghanistan and the hardline Islamists rapidly returned to power. "The two delegations discussed political, economic, human, health, education and security issues as well as providing necessary banking and cash facilities," tweeted Afghan foreign ministry spokesman Abdul Qahar Balkhi.
U.S. POLITICS・1 DAY AGO
Washington Post

National Guard members who refuse to be vaccinated against the coronavirus will be barred from training and have their pay withheld, the Pentagon said Tuesday, in an apparent warning shot from the Biden administration to Republican governors looking to defy federal mandates. The directive from Defense Secretary Lloyd Austin comes...
MILITARY・2 DAYS AGO

Russia criticizes US for Afghanistan crisis

Despite Biden vow, Afghanistan evacuees admitted to US underwent almost no vetting after interviews: report

Only a small number of the Afghanistan evacuees who came to the U.S. following President Biden's decision earlier this year to withdraw U.S. troops from the country were vetted in addition to being screened, according to a memo drafted by Senate Republicans, a report said. The alleged lack of vetting...
U.S. POLITICS・5 DAYS AGO
Business Insider

Afghanistan's financial system is on the brink of collapse, the UN warned. The US is still keeping nearly $10 billion of its reserves frozen.

Afghanistan's banking system could collapse in months, the UN warned in a document seen by Reuters. Much of the country's reserves were frozen after the Taliban takeover. The UN said there needs to be a way to get money to the Afghan people without helping the Taliban. The United Nations...
ECONOMY・9 DAYS AGO
arizonadailyindependent.com

On Monday, Congressman Andy Biggs sent a letter to President Biden regarding the Biden administration’s Afghanistan withdrawal. “Several months after the disastrous withdrawal from Afghanistan there are still unanswered questions about events surrounding the withdrawal, the attack on the airport, the drone strike, and how many Americans are still trying to escape from Afghanistan,” wrote Biggs. Please provide your answers to the following questions by December 15, 2021:
U.S. POLITICS・9 DAYS AGO

The Wounded Warrior Experience: How veterans are coping with the withdrawal from Afghanistan

Major General Mark Graham and his wife know about loss — and the high cost of war. He and his wife Carolyn lost not one, but two sons a year apart while General Graham was serving as a top commander in the U.S. Army. Their family's story was told in "The Invisible Front: Loss and Love in the Era of Endless War."
MILITARY・12 DAYS AGO
americanmilitarynews.com

A former United States soldier who journeyed to Afghanistan to help his family escape the Taliban said the US Embassy in Pakistan has repeatedly hung up on him while he was pleading for help. Embassy staff also refused to let him enter the building to speak with a government official, he said.
MILITARY・14 DAYS AGO
POLITICO

'This experience broke a lot of people': Inside State amid the Afghanistan withdrawal

The chaos that came with ending America's longest war extended to Foggy Bottom, where staff were left with psychological scars.
WASHINGTON, DC・14 DAYS AGO
erienewsnow.com

The Biden administration is considering sending some of the Afghan evacuees at a US military base in Kosovo back to Afghanistan if they cannot clear the intense vetting process to come to the United States, according to three US officials familiar with the matter. A return to Afghanistan is only...
U.S. POLITICS・14 DAYS AGO

The Real Reason the Afghan Army Collapsed in Face of Taliban Advance? It Was Mostly ‘Ghost’ Troops

After spending $83 billion training up and arming Afghan troops to face the Taliban, U.S. military leaders seemed as surprised as anyone at the ease with which the Islamist militant group swept back into power this summer. Now, a former finance minister has explained the dizzying collapse of the Afghan National Army: Most of its 200,000 soldiers only existed on paper. The idea that Afghan troop numbers were unreliable is not a new one. But Khalid Payenda, who resigned as finance minister as the Taliban advanced, said as many as five in six soldiers were “ghosts.” He told the BBC: “The way the accountability was done, you would ask the chief in that province how many people you have and based on that you could calculate salaries and ration expenses and they would always be inflated.” Payenda said soldiers who were killed or deserted were also routinely kept on the books, with their commanders using their bank cards to take their salaries. And he said many generals were “double-dipping,” accepting money from the Taliban on top of their government salaries to give up without a fight.
MILITARY・22 DAYS AGO
Vice

Confusingly, the leaders of this land of contradictions—who have said they’re motivated by California governor Gavin Newsom’s mandate that schoolchildren be vaccinated against COVID-19—have asserted that they are not seceding from either the state of California or the United States, but simply refusing to recognize their legal and political authority. (They cite the refusal of San Francisco, a Newsom stronghold, to enforce federal immigration laws as precedent, though that city has not declared itself a republic.) Footage from the council meeting, though, complicates the picture.
U.S. POLITICS・7 HOURS AGO
MilitaryTimes

National Guardsmen who refuse to be vaccinated against COVID-19 won’t be eligible for any federal training or pay, which includes monthly drill weekends, per a memo signed Tuesday by Defense Secretary Lloyd Austin. Austin calls on the Army and Air Force secretaries to enforce his mandate by barring unvaccinated Guardsmen...
AEROSPACE & DEFENSE・1 DAY AGO

The South Korean and U.S. defense chiefs met Thursday for their annual talks, as Washington pushes to reinforce alliances with its partners to curb mounting challenges from China and increasing North Korean nuclear threats. After the talks, the allies were expected to announce a boosting of their decades-long military alliance while U.S. Defense Secretary Lloyd Austin will likely reaffirm America’s extended deterrence to South Korea using its full range of military capabilities.But it was unclear how much Seoul would do to ease historical tensions with Japan, another key U.S. regional ally, and whether it would play a greater regional...
MILITARY・21 HOURS AGO
AFP

The US military will reinforce deployments and bases directed at China and Russia, while maintaining forces in the Middle East adequate to deter Iran and jihadist groups, the Pentagon said Monday, referencing results of a review. Global responsibilities "require us to make continuous changes to our Middle East posture, but we always have the capability to rapidly deploy forces to the region based on the threat environment," Karlin said.
FOREIGN POLICY・2 DAYS AGO
WKRG News 5

Defense Secretary Lloyd Austin has decided that National Guard members who refuse COVID-19 vaccination will be barred from federally funded drills and training required to maintain their Guard status.
MILITARY・2 DAYS AGO