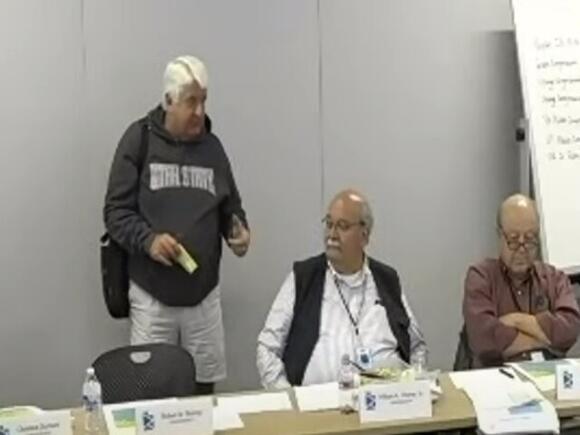 Bishop, sporting a hoodie, shorts and sandals, said on Monday he believed the congressional boundaries should have a mix of urban and rural areas. He based it on his years in congress, pointing to the impact public lands have on rural areas over urban areas of Utah.

He also suggested that the commission was being used to favor Democrats in boundary drawing.

"If there’s a minority party with 30% of the vote, it should tell them that three-fourths of the state is not agreeing with them and they should change their method somewhere," he said. "Instead there are groups out there that want this commission to do it for them."

Bishop, who is a partisan appointment to the voter-approved commission, proceeded to criticize the make up of the commission.

"I respect each of you as an individual. But I’m sorry as a group we suck. And part of that is simply the way this has been organized. This is a metro-centric group. When five of the seven are from the Wasatch Front, three of the five, the majority are from Salt Lake County, we see things in a different way," he said, adding: "It’s frustrating and for me I can’t take this anymore. I’m going to make things easy for you. I’m going to resign now."

Bishop proceeded to pack up and thank his colleagues, who at times chuckled.

After he left, former Utah Supreme Court Chief Justice Christine Durham asked the commission's legal counsel how they should proceed with a member leaving. The lawyer replied that he believed they could proceed. Former Sen. Lyle Hillyard, said he believed that when he voted for maps, he did it to present the legislature with options.

Despite Bishop's spectacular exit, the commission ultimately approved maps to submit to the Utah State Legislature's Redistricting Committee. While voters approved the creation of an independent redistricting commission in 2018, it remains the legislature that has the final say.

In a statement, House Speaker Brad Wilson, R-Kaysville, who appointed Bishop to the panel, criticized the independent commission.

"I share his frustrations with how the commission has conducted its business. His decision to step down at this point in the process is further evidence that the duly elected representatives of the people are best suited to redraw district boundaries, as the courts have repeatedly affirmed," Speaker Wilson said. "As we expect to receive and review maps from the commission in just over a week, I do not intend to appoint a replacement."

Reacting to the Speaker's statement, Katie Matheson of the liberal-leaning policy group Alliance for a Better Utah, posted on Twitter that the independent commission was doing its job.

Better Boundaries, which sponsored Proposition 4 (the independent redistricting commission ballot initiative), said in a statement that it remained encouraged by the work the commission was doing.

"We are disappointed to hear of Commissioner Rob Bishop's resignation from Utah’s Independent Redistricting Commission. The Commission, which was passed by voters in 2018, renegotiated by lawmakers and signed into law by Governor Herbert in 2020 is required to uphold a certain set of standards and criteria," said Better Boundaries Executive Director Katie Wright. "Moving forward, we are encouraged by the work of the remaining six commissioners to suggest objective and qualified maps to the state legislative redistricting committee through this fair and transparent process."

Even now, after releasing their final set of maps a day after the Nov. 15 deadline, the Washington State Redistricting Commission's work has continued to spark bitterly divided debate between partisans: One side argues that Monday night's final meeting was a train wreck; the other argues it was more of a dumpster fire.
WASHINGTON STATE・7 DAYS AGO
Big Country News

BOISE — Idaho’s bipartisan redistricting commission wrapped up its business on Wednesday at the Idaho State Capital by re-doing votes to approve new legislative and congressional district maps and then approving the state’s final redistricting plan. Commissioners approved the same maps as they originally did on Friday without making any...
BOISE, ID・14 DAYS AGO
WETM

The 2020 California Citizens Redistricting Commission released draft maps for the state’s congressional, senate, assembly and board of equalization districts ahead of the California Supreme Court mandated Nov. 15, 2021 deadline. “We are finally here,” said Commission Chair Trena Turner. “We proudly present these draft maps to the people of...
POLITICS・14 DAYS AGO

SOUTH JERSEY — The New Jersey Congressional Redistricting Commission will hold its fifth and final meeting with public testimony on Saturday, November 20 at 10:00 a.m. The meeting will be virtual via Zoom. US congressional seats are allocated to each state in proportion to each state’s population. Redistricting takes place...
U.S. POLITICS・10 DAYS AGO
Salt Lake Tribune

The Republican Utah Legislature and our Republican governor, in their consensual redrawing of congressional maps, have done more than just placed bizarre lines on a map. Jointly they have added to the growing mistrust of government. Democracy can only function properly when the governed believe the political leaders and institutions...
UTAH STATE・11 DAYS AGO
Chronicle

Washington's redistricting commission admitted it failed to meet a midnight deadline to redraw the state's congressional and legislative maps — despite making a show of voting on new maps late Monday following a five-hour meeting in which commissioners negotiated largely out of the public's view. The failure of the bipartisan...
POLITICS・9 DAYS AGO

Letter: Members of the Independent Redistricting Commission deserve our thanks

I would like to offer my humble gratitude to the members of the Utah Independent Redistricting Commission (UIRC). The six commissioners (two Republicans, two Democrats and two unaffiliated voters) who came to consensus on their final maps show us that fair representation can be achieved when self-interest is removed from a political process.
POLITICS・10 DAYS AGO
kcpw.org

The Hinckley Institute Radio Hour — This week on the program, a panel of experts discusses the process that went into redrawing Utah’s political boundaries for the next ten years. Over the last month, the Utah Independent Redistricting Commission and Utah Legislature wrapped up their respective redistricting efforts and presented...
UTAH STATE・9 DAYS AGO
Crosscut

In a first, court will decide new WA redistricting plan as commission falters

For the first time ever, Washington state’s bipartisan redistricting commission has failed to agree on new boundaries for the state’s legislative and congressional districts. Now, it’s up to the state Supreme Court to draw new district maps — a decision that will shape state politics for the next decade. Under...
WASHINGTON STATE・10 DAYS AGO

(The Center Square) – One commissioner of the Washington Redistricting Commission (WRC) deliberately ran out the clock in a bid to get maps more favorable to Democrats from the Washington State Supreme Court, The Washington Observer reported regarding the WRC's failure to meet its statutory deadline in drawing legislative and congressional districts.
POLITICS・8 DAYS AGO
ctnewsjunkie.com

House leaders on Connecticut’s redistricting panel have arrived at a tentative agreement and expect to meet Thursday to approve a map of House voting districts for the next decade, in the first of three maps due before Nov. 30. The Reapportionment Commission was rushing this week to meet its deadline...
FAIRFIELD COUNTY, CT・9 DAYS AGO
publicradiotulsa.org

Democrats call for independent redistricting commission in Oklahoma, offer their own congressional map

Democrats in the state legislature are proposing their own Congressional redistricting map, one that would mainly preserve Oklahoma City as its own district. Rep. José Cruz’s state House district and its large Hispanic population is among the south Oklahoma City communities being moved from the Fifth District into the mostly rural Third District, represented by Congressman Frank Lucas. Meanwhile, areas being brought into the Fifth District are largely conservative, giving Republican candidates an edge in what’s been a competitive area.
OKLAHOMA STATE・11 DAYS AGO
norcalrecord.com

The California Citizens Redistricting Commission (CCRC) on Wednesday issued preliminary maps for Congressional, state Legislature, and local jurisdictions in the November 2022 elections. The maps won’t be final until Dec. 27, the deadline set by the California Supreme Court, though commissioners had sought to extend it until the second week...
FRESNO, CA・11 DAYS AGO
Michigan Daily

The Michigan Independent Citizens Redistricting Commission met at the Michigan League Thursday to hear from community members about their concerns regarding the redistricting process in which new state and congressional district lines are being drawn. The commission was approved in 2018 and has been working on redrawing district lines under...
ANN ARBOR, MI・8 DAYS AGO
Park Record

Summit County residents — and their fellow Utahns across the state — have every right to be furious. Three years ago, Utah voters made clear their desire to bring transparency and fairness to the once-a-decade redistricting process by approving a statewide ballot measure to create an independent commission to draw political boundaries. Now, Republican state lawmakers have thumbed their noses — or performed a gesture with a different digit — at their constituents.
UTAH STATE・6 DAYS AGO
southseattleemerald.com

Washington’s redistricting process has entered uncharted territory following a state commission’s failure to approve an updated plan before its final deadline on Monday, Nov. 15. The task of deciding political boundaries for the next decade now falls to the State Supreme Court. It’s the first time ever under the state’s...
SEATTLE, WA・9 DAYS AGO
KIMA TV

The Washington State Redistricting Commission says it has failed to agree on a districting plan by the deadline, and so now the courts will take over. Washington’s 2021 commission consists of four voting members — two Democrats and two Republicans — appointed by legislative caucus leaders. By law, at least...
WASHINGTON STATE・10 DAYS AGO