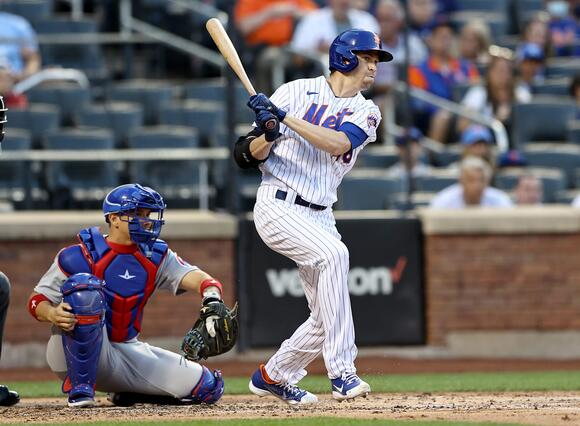 Five Yankees and one Met have been named finalists for MLB’s Silver Slugger Awards, which will be given out

The lone Met is…a pitcher? Indeed, it’s Jacob deGrom, who went 12-for-33 with six RBI – a .364 average and .758 OPS – in the half-season he was active, and at one point had more RBI than earned runs allowed. He’s up against Arizona’s Madison Bumgarner, Colorado’s German Marquez, and Atlanta’s Max Fried for the award.

On the Yankees side, Aaron Judge, who hit a career-high .287 with 39 home runs and 98 RBI, is one of eight finalists in the outfield, while the two men he often shared an outfield with down the stretch, Giancarlo Stanton and Joey Gallo, are both among five finalists at designated hitter.

The other two Yankees finalists are DJ LeMahieu at second base and Gary Sanchez at catcher, giving them a total of five finalists that tied three other teams for the most in MLB. LeMahieu is looking for his third straight award, as he has been the AL’s winner each of the last two seasons, while Sanchez won the award in 2017.

Judge and Stanton also won Silver Sluggers in 2017, and Stanton has also previously won in 2014. deGrom has never won the award.

Per MLB, “Silver Slugger Award winners are decided by votes from the manager and three coaches of each MLB team. Votes are based on a combination of statistical production as well as the managers’ and coaches’ general impressions of a player’s overall offensive value.”

According to multiple reports, the Pirates have picked up a former New York Yankees outfielder off waivers. Fan Pirates insider Jason Mackey of the Post-Gazette says that the Pirates claimed Greg Allen.
MLB・22 DAYS AGO
NJ.com

A familiar name is back on the market. The Orange County Register reports the Los Angeles Dodgers designated outfielder Billy McKinney for assignment last week. MLB clubs faced a Friday deadline to set their 40-man rosters ahead of next month’s Rule 5 Draft. If McKinney passes through waivers, he could...
MLB・5 DAYS AGO
WFAN Sports Radio

Yankees general manager Brian Cashman confirmed that he has spoken with all of the market’s top free agent shortstops, including Carlos Correa, Trevory Story, and Corey Seager.
MLB・8 DAYS AGO
metsmerizedonline.com

On November 14, 2018, Jacob deGrom won his first Cy Young Award. He would go on to repeat the feat in 2019, making it back-to-back years in which he was recognized as the best pitcher in the National League. The 2018 season was a bit of a statistical anomaly for...
MLB・13 DAYS AGO

NY Mets: Consider this new role down the road for star Jacob deGrom

We all love Jacob deGrom. And he is still undoubtedly the best pitcher in the world, posting a 1.08 ERA in 92 innings pitched before getting injured this year. But maybe, just maybe, it is becoming unrealistic as he ages for him to be able to handle the workload we expect of him, as a starting pitcher, on a year-to-year basis. Unfortunately for the New York Mets this season, Jacob deGrom’s elbow injury in game 82, about a perfect halfway point of a 162 game season, marked the demise of the Mets in 2021, which can be read about in fellow Rising Appler Mason Smoller’s article here. A daresay recurring elbow injury at that. An elbow that had been christened in a way when the pitcher underwent Tommy John surgery at age 22 in the year he was drafted out of Stetson in 2010.
MLB・11 DAYS AGO
WFAN Sports Radio

A Yankee fan tried to lure Marcus Stroman to the Yankees via Twitter, but the free agent pitcher instead took the opportunity to rip the organization.
MLB・11 DAYS AGO
WFAN Sports Radio

Marcus Thames, recently told he would not have his contract renewed as hitting coach for the Yankees, is reportedly in agreement to take the same role with the Marlins.
MLB・10 DAYS AGO
WFAN Sports Radio

The New York Yankees are expected to fill in key positions this MLB offseason, and one potential target for them could be Matt Olson of the Oakland Athletics. New York has reportedly made inquiries on the All-Star player, but formal talks have not yet started between the two sides according to analyst Jack Curry.
MLB・9 DAYS AGO
Empire Sports Media

For the 2022 season, the New York Yankees still have questions in center field. The biggest one is if Aaron Hicks can stay healthy this season. Hicks missed most of the 2021 season due to wrist surgery. For the Yankees, Hicks has been an on and off again player, but received a contract extension much to the surprise of many Yankee fans.
MLB・14 HOURS AGO
WFAN Sports Radio

In a surprise move, the Yankees designated Clint Frazier, Tyler Wade and Rougned Odor for assignment, while adding multiple players to the big-league roster.
MLB・8 DAYS AGO
WFAN Sports Radio

Shortly after designating him for assignment on Friday, the New York Yankees have released outfielder Clint Frazier, who now becomes a free agent.
MLB・4 DAYS AGO

The New York Yankees had two players named to the 2021 All-MLB Team on Tuesday. Cole is now a perfect 3-for-3 in making the All-MLB Team, and this is his second First Team selection (also 2019). With a 3.23 ERA, 243 strikeouts and AL-best 5.93 strikeout-to-walk ratio in 181 1/3 innings, he finished second in the AL Cy Young voting.
MLB・3 DAYS AGO
Empire Sports Media

The New York Yankees could lose three fixtures with questionable futures this coming week. With the MLB/MLBPA Collective Bargaining Agreement expiring Wednesday, they agreed to move up the day that players can be non-tendered, to the day before the CBA expires. Non-tendered players are not given offers to stay with their respective teams.
MLB・15 HOURS AGO
metsmerizedonline.com

Jacob deGrom was trending on Twitter during the Thanksgiving holiday as many Mets fans flooded Twitter with their thanks for the Mets ace, including teammate, Trevor May!. The Mets released a Thanksgiving tweet that featured former Mets players Mookie Wilson, Ron Swoboda, John Franco, Glendon Rusch and Turk Wendell on what they are thankful for during this holiday season.
MLB・1 DAY AGO

Five years ago, the out-of-contention Yankees traded their star pending free agent, Aroldis Chapman, to the Cubs for a nice prospect haul—easily recouping what they initially dealt to get him—then signed Chapman to a long-term deal the following offseason. Taking a page out of their playbook, the Marlins are expressing interest in a Starling Marte reunion, according to MLB Network’s Jon Heyman, just three-and-a-half months after shipping him to the Athletics.
MLB・15 DAYS AGO
metsmerizedonline.com

The past few months have been tough on the New York Mets and the fanbase. But, you know, we’re in the aftermath of Thanksgiving, and there’s a saying out there that you should spend time counting your blessings, not your troubles. For just a few moments, let’s not think about...
MLB・1 DAY AGO
The Spun

Former Mets pitcher Pedro Feliciano reportedly passed away in his sleep on Sunday night. ESPN’s Eduardo Perez first had the news on his Twitter account on Monday morning. Feliciano was just 45 years old and was reportedly jet skiing on Sunday with his family. Feliciano played nine seasons in the...
MLB・19 DAYS AGO
FanSided