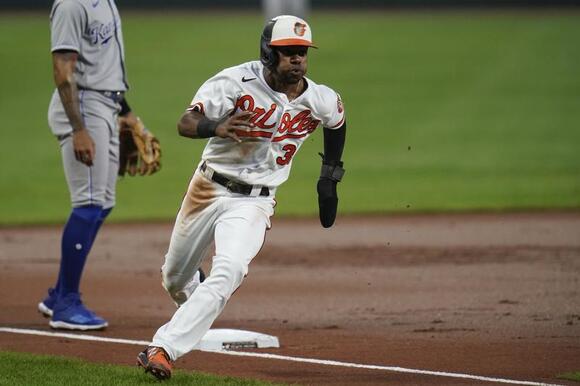 Once considered a fringe talent at the plate, Mullins blossomed into a complete hitter during the 2021 season, batting .291 with 30 home runs and 59 RBI.

Since 1980, the Silver Slugger Award has been given to the best offensive players at each position in both the American and National leagues.

Mullins’ .878 OPS (on-base plus slugging percentage) ranks third among American League outfielders, behind only Tucker and Judge, and his 30 steals are tied for first with Myles Straw of the Cleveland Indians.

The manager and three coaches of each team vote on the winners and cannot select players from their own club.

Mullins would be the first Oriole to win the award since Mark Trumbo in 2016. That season Trumbo hit 47 home runs and 108 RBI on an 89-win team that ultimately lost a 1-0 heart-breaker to the Toronto Blue Jays in the Wild Card game.

The winners will be announced during a one-hour show on MLB Network. The special is scheduled for Nov. 11 at 6 p.m.

The Baltimore Orioles are willing to listen to teams' offers for center fielder Cedric Mullins, but their asking price is understandably high after the 27-year-old just polished off an All-Star season with 30 home runs and an .878 OPS. Jon Heyman of MLB Network and Audacy provided the report:. Mullins...
MLB・11 DAYS AGO
NESN

Why On Earth Are Orioles Reportedly Willing To ‘Listen’ On Cedric Mullins?

The only guarantees in life these days? Death, taxes and the Orioles posting a losing record. It makes sense that Baltimore is willing to shell out in an effort to improve, considering the organization hasn’t sniffed a winning record since 2016 and finished last in the American League East in four of the last five seasons (and no, we won’t mention who they finished in front of in 2020).
MLB・11 DAYS AGO
Yardbarker

The next two days promise to be busy ones for the Orioles. Because of the likelihood of a lockout beginning on Thursday, the players and owners agreed to move up the deadline for tendering contracts from Thursday to Tuesday at 8 p.m. The Orioles have six players eligible for arbitration:...
MLB・9 DAYS AGO
Audacy

Should the Colorado Rockies be looking at Baltimore Orioles outfielder Cedric Mullins?

Jon Heyman of MLB Network reported on Friday that the Baltimore Orioles are making outfielder Cedric Mullins available in a trade. Heyman notes that the asking price is “extremely high” but there undoubtedly will be plenty of teams interested due to a need for outfielders. As Colorado Rockies fans well know by now, the Rockies are in need of outfield help.
MLB・11 DAYS AGO
MLB

During Spring Training, 30 stolen bases would have seemed like an attainable goal for Cedric Mullins. The speedy center fielder had racked up 110 steals in 494 career Minor League games and had stolen at least 30 bases in a season twice in his Minor League career, with 30 steals for Delmarva in 2016 and 33 steals between Norfolk and Bowie in 2019. If he could become a mainstay in the lineup and get on base at a decent clip, 30 steals would be a milestone well within his reach.
MLB・8 DAYS AGO
FanSided

Out of all the news coming out of baseball at the moment, one report that made some headlines around the league in recent days is the Baltimore Orioles potentially listening to trade offers for star center fielder Cedric Mullins. Could the Miami Marlins have interest in a potential trade?. When...
MLB・9 DAYS AGO
CBS Sports

Following a quiet Thanksgiving holiday, MLB teams went back to work on Black Friday, with the Mets signing three free agents to multi-year contracts (Mark Canha, Eduardo Escobar, and Starling Marte). A flurry of deals are expected prior to the expiration of the collective bargaining agreement next Wednesday, at which point the owners are likely to lock out the players. Here are Saturday's hot stove rumors.
MLB・11 DAYS AGO

Danny Jansen: A Key to Kevin Gausman and the 2022 Blue Jays

Jon Heyman of MLB Network reported late last week that the Baltimore Orioles are making outfielder Cedric Mullins available via trade. Heyman noted that the asking price is “extremely high” but there will be some teams interested in Mullins after the season he had in 2021, including the New York Yankees.
MLB・5 DAYS AGO
Sportsnaut

What is the best MLB team of all time?

What is the best MLB team of all time? The Atlanta Braves are the best baseball team as the reigning
NFL・3 DAYS AGO
The Baltimore Sun

Despite MLB lockout, Orioles have chance to add talent at margins with this week’s minor league Rule 5 draft

Had MLB’s owners not locked the players out, the Orioles’ brass and their personnel staff would be at baseball’s winter meetings to further build out the 2022 roster and stay plugged in with the game’s latest developments. As it stands, there’s only one traditional piece of business that will be held as normal: Wednesday afternoon’s minor league phase of the Rule 5 draft. The signings of ...
MLB・1 DAY AGO

Before he reaches free agency next season, New York Yankees right fielder Aaron Judge clarifies his desire to stay in New York for the rest of his career. Ever since he debuted for the team in 2016, Aaron Judge has had an illustrious career with the Yankees. He began his...
MLB・23 DAYS AGO
CBS Baltimore

BALTIMORE (WJZ) — Tim Kurkjian, a Maryland native who once worked the Baltimore Orioles beat, has been awarded the Baseball Writers’ Association of America’s Career Excellence Award and will be honored at the National Baseball Hall of Fame and Museum next July. He will be presented the award “for meritorious contributions to baseball writing” during induction ceremonies scheduled for July 22-25 in Cooperstown, N.Y., the hall announced Tuesday. A native of Bethesda, Md., Kurkjian graduated from Walter Johnson High School and went on the study journalism at the University of Maryland. He landed his first job in 1979 at the Washington Star. Following...
MLB・23 HOURS AGO
onfocus.news

After a season filled with some unforgettable offensive performances, MLB’s top hitters were recognized Thursday night when the Silver Slugger Awards were announced on MLB Network. The World Series-champion Braves led the way with four winners, tied for the second most by any team in a single season, behind the...
MLB・13 DAYS AGO
South Side Sox

“Deep Dive” focuses on the depth of each position in the White Sox organization. Each position is made up of five parts:. Depth in the Rookie Leagues (Dominican and Arizona) Depth in A-Ball (Kannapolis and Winston-Salem) Depth in the higher levels (Birmingham and Charlotte) Under the Radar-type detail on a...
NFL・12 DAYS AGO
NESN

The New York Yankees seemingly have been tied to each free agent this offseason, but reportedly got one of their guys Monday. The Yankees signed former Boston Red Sox shortstop José Peraza to a minor league deal, according to Dan Martin of the New York Post. Peraza has bounced around...
MLB・8 DAYS AGO
Minneapolis Star Tribune

The Yankees' Gerrit Cole received one first-place vote for the AL Cy Young Award last season, with the Blue Jays' Robbie Ray being the popular selection. Someone believed the Cardinals' Mike Shildt was a better pick for NL Manager of the Year over eventual winner Gabe Kapler of the Giants. In the past, there once was a guy who didn't think pitchers deserved MVP votes.
MLB・7 DAYS AGO
Inside The Phillies

Could Phillies Pursue This Gold Glove Center Fielder via Trade?

The Philadelphia Phillies have reportedly had trade discussions with the Tampa Bay Rays about center fielder Kevin Kiermaier, per Matt Gelb of The Athletic.
MLB・8 DAYS AGO
WHNT News 19

Buck O’Neil, a champion of Black ballplayers during a monumental, eight-decade career on and off the field, joined Gil Hodges, Minnie Miñoso and three others in being elected to the baseball Hall of Fame on Sunday.
MLB・2 DAYS AGO