‘The Pressure Is There’: Blackhawks Look To Start Winning After Continued Losing Streak 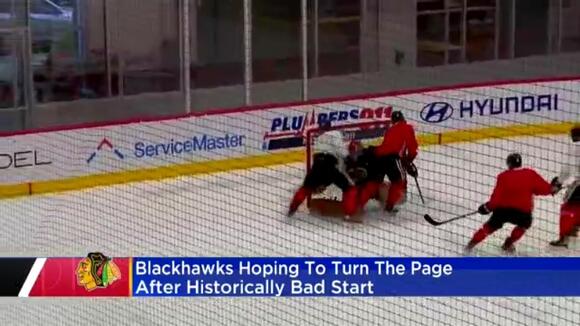 CHICAGO (CBS) — Forget about getting their first win.

With six contests into the season, the Chicago Blackhawks are still looking for their first lead in a game. CBS 2’s Jackie Kostek reports on a team trying to take the first step in the right direction.

Extra conditioning for the Blackhawks Monday as the team looks to turn the page after a historically bad start to the season.

“I don’t think the season’s ever slip away. (The) 2019 Blues were dead last in December. The sooner we can turn it around, the better. The solution is going to start in that dressing room and that dressing room only,” said Blackhawks center Kirby Dach.

While the players maintain the onus is on them and not the coaching, many wonder how long Head Coach Jeremy Colliton and GM Stan Bowman will remain at the helm. The Blackhawks now staring down three tough games in four days.

The one bright spot for the Blackhawks is their work on special teams. Now the question becomes how can they translate that success into five on five play.

The Blackhawks also dealing with their own COVID cases. Three players, including Patrick Kane and three assistant coaches have tested positive. That’s despite being 100% vaccinated.

CALGARY -- On a night Calgary didn't have its 'A' game, Milan Lucic and the club's veteran fourth line delivered a pair of timely goals. Lucic scored a key one early and Trevor Lewis added an empty netter as the Flames took a 5-2 victory over the Chicago Blackhawks on Tuesday.
NHL・13 DAYS AGO
Chicago Sun-Times

WASHINGTON — The Blackhawks look like a competitive, cohesive hockey team more and more each day. A gutsy 4-3 shootout win Thursday against the Metropolitan Division-leading Capitals was the latest milestone of progress in the Hawks’ general surge under interim coach Derek King. Seth Jones’ game-tying snipe with 8:04 left...
NHL・4 DAYS AGO
abc17news.com

NEW YORK (AP) — Patrick Kane scored the only goal in the shootout and the Chicago Blackhawks beat the Islanders 3-2 Sunday night, sending New York to its 11th straight loss overall and its sixth straight setback its new arena. Kane beat Semyon Varlamov with Chicago’s second shootout attempt, and Marc-Andre Fleury denied all three chances by the Islanders to secure the win. The Islanders tied the game at 2-all with four seconds left in the third period on a goal by defenseman Noah Dobson. Brandon Hagel and Dylan Strome scored in regulation for Chicago. Fleury finished with 22 saves. Jean-Gabriel Pageau also scored for the Islanders, who earned a point for the third straight game but fell to 0-8-3 in their losing streak. Varlamov finished with 24 saves.
NHL・1 DAY AGO
Sportsnaut

The NHL season officially started on October 12. In this article, we track all the NHL games today as well
NFL・4 HOURS AGO
fadeawayworld.net

If you look at the standings, the Houston Rockets are 13th overall behind the Spurs, Kings, and Blazers in the Western Conference. But after Sunday night's victory over the Pelicans, H-Town made a bit of history. Amazingly, the victory marks the sixth straight win for the Rockets, making them the...
NBA・1 DAY AGO
ClutchPoints

Boston Bruins forward Brad Marchand can really get under the skin of anyone. He proved that once again when he annoyed New York Rangers left winger Artemi Panarin in a game last Friday to the point that Panarin chucked his glove to Marchand near the end of the contest. So...
NHL・6 DAYS AGO
hockeyinsiders.net

Lots of things happened in the hockey world yesterday, but the hot topic continues to be the Brad Marchand and Artemi Panarin incident. Marchand said something to Panarin between the benches which resulted in Panarin taking his glove off and throwing it at Marchand. After the game Marchand said he...
NHL・9 DAYS AGO

We’re starting to get an idea of who some of the teams are that might be interested in Boston Bruins forward Jake DeBrusk now that his trade request has gone public.
NHL・5 DAYS AGO
WEEI Sports Radio

The NHL’s inconsistency when it comes to penalizing slew-foots continues, as Devils defenseman P.K. Subban committed his fourth of the season Friday night and apparently won’t face any supplemental discipline for it.
NHL・2 DAYS AGO
WEEI Sports Radio

Struggles on offense, defense, and special teams doom the Chicago Bears again as they suffer their fifth straight loss. Watching Chicago Bears games is becoming an exercise in futility. The team dropped its fifth game in a row. Their record now stands (barely) at 3-7. Additionally, any talk about them possibly making a run to the playoffs should now end.
NFL・14 DAYS AGO
Sportsnaut

This latest edition of the NHL Stat Corner covers the past two days (Friday/Saturday) since the NHL took a one-day break for American Thanksgiving. Scoring highlights this entry with lots more player and team stats and milestones from around the NHL. Ovechkin Goals Fuel the Capitals. Alex Ovechkin is tied...
NHL・8 DAYS AGO
Fox5 KVVU

LAS VEGAS (FOX5) -- The Raiders travel to Dallas to take on the Cowboys Thanksgiving afternoon. That in itself makes this a big game, bit for the team it's more about righting the ship and ending their three game losing streak. Linebacker Cory Littleton said the team is focused on...
NFL・13 DAYS AGO
doorcountydailynews.com

The Green Bay Gamblers hope to lean on their pre-Thanksgiving crowd Wednesday when they play the Dubuque Fighting Saints at the Resch Center. After getting off to a strong start, the Gamblers 0-for-November, including a 7-2 loss to Youngstown in their first home of the month. The Fighting Saints have not fared much better after beating Waterloo 5-1 on November 5th, going 0-4 the rest of the way.
GREEN BAY, WI・13 DAYS AGO
FanSided

The Flyers will look to break their five-game losing streak tonight at the Rock(The Prudential Center) as they take on the New Jersey Devils. Both teams have 20 points so this will be a big two points for either teams to try to start catching up to the Blue Jackets and Penguins in the standings. This will be the 20th game for the Flyers tonight and a big test against a Metropolitan opponent. These games tend to get chippy and play out way differently than that of a non-division game.
NHL・8 DAYS AGO
NBC Connecticut

What Are the Longest Winning and Losing Streaks in NBA History?

The Phoenix Suns have put their slow start to the 2021-22 NBA season well behind them. After dropping three of their first four games, the reigning Western Conference champions have reeled off 17 consecutive victories, tied for the longest winning streak in franchise history. Their latest victory came on Tuesday...
NBA・6 DAYS AGO
The Game Haus

Monday evening, the Cleveland Cavaliers losing streak extended to four games after losing to the Brooklyn Nets, 117-112. Injuries leading to scarce depth continue to haunt the Cavaliers in every way. Cleveland managed to hang with the star-studded Nets well into the fourth quarter. As usual, the Cavs fought and played with tremendous effort yet again, however, it just wasn’t enough. Fatigue and a lack of depth are perhaps what resulted in the close loss.
NBA・14 DAYS AGO