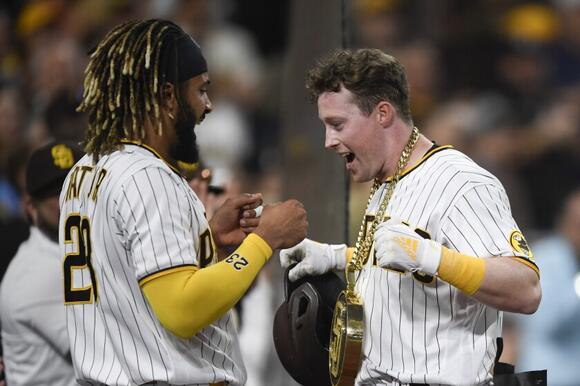 The Padres ’ three All-Star hitters — Fernando Tatis Jr., Manny Machado and Jake Cronenworth — have been announced as Silver Slugger Award finalists in the National League at their respective positions.

Machado’s 28 homers were tied for fourth among NL third basemen behind the Cardinals’ Nolan Arenado (34) and the Reds’ Eugenio Suarez (31). The Brewers’ Eduardo Escobar and the Cubs’ Patrick Wisdom both hit 28.

Riley, Arenado and Wisdom are also finalists at third base.

Meantime, Cronenworth is a finalist alongside the Braves’ Ozzie Albies, the Reds’ Jonathan India and the Dodgers’ Justin Turner, who hasn't played even one inning at second base in the last two seasons.

The winners will be announced Nov. 11.

After seven years with the Dodgers, Corey Seager is trading Dodger blue for a whole lot of green. A big, Texas-sized pile of green. Seager agreed to a 10-year, $325 million deal with the Texas Rangers on Wednesday, leaving LA in his rearview mirror. In the wake of Seager’s signing...
MLB・4 DAYS AGO
eastvillagetimes.com

The 2021 All-MLB teams were named on Tuesday, and the Padres’ superstar was named among the 1st Team. Major League Baseball began naming their All-MLB team, much like the NFL’s All-Pro, beginning in 2019. The Padres’ own Kirby Yates was named to the initial 1st Team group in 2019 after...
NFL・10 DAYS AGO
The Spun

Carlos Correa has made an official decision on his qualifying offer from the Houston Astros. Correa has declined the Astros’ $18.4 million qualifying offer, according to Jon Heyman. His days in Houston are over. The 27-year-old star is now the top free agent in baseball and is bound to receive...
MLB・19 DAYS AGO
Empire Sports Media

The New York Yankee family was saddened to learn of the passing of ex-Yankee manager Bill Virdon. Virdon was manager of the Yankees during 1974 and 1975 before being replaced in 1975 my the new manager Billy Martin. In 1974 he won 89 games for the Yankees. However, Virdon’s claim...
MLB・9 DAYS AGO

After coming up short in this year’s playoffs, the Los Angeles Dodgers could be going back to their fundamentals: acquiring another big name. Bob Nightengale of USA Today Sports reported this week that the Dodgers are interested in former Cy Young candidate Sonny Gray, having engaged in trade talks with the Cincinnati Reds. Fellow Reds starter Luis Castillo was also included in those discussions, Nightengale adds.
MLB・20 DAYS AGO
NBC Los Angeles

Let's face it, the Los Angeles Dodgers were dealt a huge blow on Monday. First it was the loss of Cy Young Award finalist and arguably the best pitcher on the staff last season in Max Scherzer. Scherzer agreed to sign a three-year, $130 million dollar contract with the New York Mets, making him the highest paid player by annual average value in MLB history.
MLB・5 DAYS AGO
International Business Times

The New York Mets are skimming the free-agent pool, and one name that could make sense would be Steven Matz. Ironically, the 30-year-old pitcher is the same guy the Mets traded to the Toronto Blue Jays last winter. A reunion between the Mets and Matz would make sense considering the...
MLB・16 DAYS AGO
NBC Sports

The courtship of Kyle Schwarber continues in earnest. Schwarber recently declined his mutual option with the Boston Red Sox to become an unrestricted free agent, and several teams reportedly are interested in the veteran slugger. That includes the Red Sox, who remain "engaged" with Schwarber in contract discussions, per Chief Baseball Officer Chaim Bloom.
MLB・16 DAYS AGO

Noah Syndergaard helped the New York Mets reach the World Series in 2015, his first season there, and has called New York his home until he signed with the Los Angeles Angels in free agency. He said that his decision to leave the Mets was the toughest choice of his life.
MLB・15 DAYS AGO
FanSided

After the Los Angeles Dodgers decided not to give Clayton Kershaw a qualifying offer, he’s now an unrestricted free agent. Who could sign Kershaw as a free agent?. With Clayton Kershaw officially entering into free agency, there’s a ton of interest around where the legendary pitcher could land. The Los Angeles Dodgers chose not to give their longtime star a qualifying offer and now Kershaw has the freedom to look around and find a new team if he so chooses.
MLB・19 DAYS AGO
FanSided

Free agent Freddie Freeman’s latest Instagram post sure sounded like goodbye to Atlanta Braves fans, even if it wasn’t. If this isn’t goodbye, then Freeman owes fans an explanation because…what the hell?. The greater likelihood is that Freeman is trying to thank Braves fans for a wonderful season, in which...
MLB・27 DAYS AGO
Yardbarker

From 1995 to 2012, Chipper Jones was the face of the Braves, bringing the organization a World Series and an MVP award. It was a somber day for Braves fans when he finally hung it up, but Jones knew he was leaving the organization in good hands, passing the torch to Freddie Freeman, and it’s remarkable how similar their careers have been thus far.
MLB・24 DAYS AGO

The Los Angeles Dodgers could be gunning for a significant free-agent move this offseason. According to MLB Network insider Jon Heyman, multiple teams, including the Dodgers, are looking to “pry” superstar first baseman Freddie Freeman away from his World Series-winning Atlanta Braves squad. Yesterday, the Dodgers lost shortstop Corey Seager...
MLB・4 DAYS AGO
WEEI Sports Radio

The Boston Red Sox continued to add to their organizational depth, signing former Detroit first-round pick Christin Stewart to a minor-league deal with an invitation to big-league camp.
MLB・4 DAYS AGO
Inside The Royals

Can a Trade With the Cubs Reunite the Royals With an Old Friend?

The Chicago Cubs could use a retooling of sorts, and could that parlay itself into a trade with the Kansas City Royals?
MLB・29 DAYS AGO
dodgerblue.com

The MLB offseason historically is a time for players to get married as it represents the only significant down time in the calendar for them, and this year that applies to Mookie Betts and Caleb Ferguson. The left-hander was first to tie the knot, as Ferguson and his fiancée Carissa...
MLB・12 DAYS AGO
Inside The Dodgers

Hall of Fame manager Joe Torre only spent three years at the helm with the Dodgers. In his first season, he was able to manage the team to their first NL Championship Series in 20 years. But apparently, a young lefty named Clayton Kershaw wasn't his biggest fan. Torre said in an interview this week ...
MLB・17 DAYS AGO
NJ.com

More problems for Robinson Cano. The New York Mets announced Wednesday “Canó was removed from the Estrellas Orientales roster with lower back discomfort. He has been prescribed physical therapy and is considered week to week.”. ESPN’s Hector Gomez was the first to report on Cano’s plans to play in the...
MLB・10 DAYS AGO
Inside The Dodgers

Last week, the NL Cy Young Award was announced and, sadly, it didn't go to any of the three deserving Dodgers starters. Julio Urias, who was the only pitcher in baseball to get twenty wins last season, finished eighth, while Max Scherzer and Walker Buehler finished third, and fourth ...
MLB・12 DAYS AGO
FanSided

The Dodgers lost Corey Seager to a monster free-agent deal with the Rangers and one of the deciding factors as to why he left LA has come to light. On Monday, the Texas Rangers signed former Los Angeles Dodgers infielder Corey Seager to a massive 10-year/$325 million contract. The front office and fans alike are sort of reeling and scratching their heads as to why/how they could lose out on Seager to the Rangers with Los Angeles being the second-largest market in the sport.
MLB・4 DAYS AGO