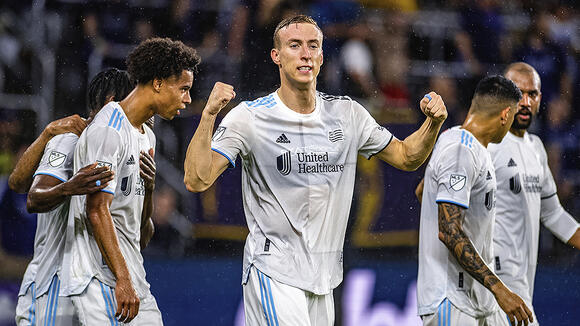 FOXBORO (CBS) — After leading the Revolution to a thrilling come-from-behind draw on Sunday, New England forward Adam Buksa has been voted the MLS Player of the Week for Week 32.

Buksa scored two goals in New England’s 2-2 draw at Orlando City SC, netting a brace in just 45 minutes of playing time. The forward took the pitch for Bruce Arena after halftime, and scored twice in the final 10 minutes of the match to help the Supporters’ Shield winners reach the 70-point threshold.

Buksa cut New England’s deficit in half with a left-footed finish on Gustavo Bou’s assist in the 81st minute, and then delivered the equalizer in the third minute of stoppage time with a powerful header on a nice feed by DeJuan Jones. He had three shots on Sunday night, raising his Revolution-record total to 105 shots on the season. Buksa’s 105 attempts and 42 shots on target are both second most in MLS this season.

Buksa has been hot lately, scoring eight goals and booting two assists in his last nine MLS appearances. He is up to 16 goals on the season after his brace on Sunday, tied for second-most in the race for the MLS Golden Boot. Buksa trails Ola Kamara (17) for the league lead in goals, while he is one tally ahead of Bou for the New England team lead.

Buksa and Bou together are the 11th pair of MLS teammates with 15 goals in the same season — a first for the Revolution.

Over his MLS career, Buksa now owns 22 goals and five assists over 53 regular season appearances. His 19 goals and assists this season are tied for ninth-best in the league.

BOSTON (CBS) — The New England Patriots are on the rise. Actually, they’ve been on the rise, having put together a five-game winning streak that’s completely flipped their 2021 season on its head. Going from 2-4 to 7-4 will have that kind of effect. The Patriots currently sit in first place in the AFC East and in third place in the conference. Neither of those situations seemed at all plausible a month or so ago. Where it goes from here remains just as unpredictable. With a home date vs. Tennessee, a road game at Indy, and two games vs. the Bills, the schedule is not particularly kind....
NFL・3 DAYS AGO
timbers.com

MLS on Friday announced the offseason calendar, meaning that right after MLS Cup is decided, there's likely to be a flurry of trades and roster moves around the league. The action begins with a four-hour trade window starting at 6am PT on Dec. 11 in which teams may trade players. Other important dates include:
NFL・7 DAYS AGO
CBS Boston

FOXBORO (CBS) — The New England Revolution won’t play again for another two weeks. So for now, they’ll have to settle for some MLS news. And that news is good news for four members of the Revolution. The club has five finalists for 2021 MLS Year-End Awards, the league announced on Monday. Headlining the group is midfielder Carles Gil, who has been named a finalist for Landon Donovan MLS Most Valuable Player and MLS Comeback Player of the Year. Gil has already been named Revolution Team MVP for the second time in three seasons after finishing 2021 with an MLS-best 18 assists. He also...
MLS・11 DAYS AGO
90min

After a record-setting regular season, the New England Revolution enter the MLS Cup Playoffs with their eyes on the big prize. The Revs lifted the Supporters' Shield for the first time in their history with a single-season record 73 points, scoring a league-high 65 goals and losing just five of their 34 matches.
MLS・9 DAYS AGO

The New England Revolution don't know who they will open the postseason against, but they do know they are favored to win their first MLS Cup title. The Revolution earned the Supporters Shield by racking up 73 points with a 22-5-7 record during the regular season. They are the top seed in the Eastern Conference and will play either fourth-seeded New York City FC or No. 5 Atlanta United FC on Nov. 30.
MLS・7 DAYS AGO
The Atlanta Journal-Constitution

Starring in the tournament: Vote for the High School Boys Soccer Player of the Week

Pembroke High's Will McManus has been voted the High School Boys Soccer Player of the Week. The sophomore, who earned 42 percent of all votes, scored two goals as his Titans defeated Oakmont in a Div. 2 tournament game. And this week's candidates are... Melvin Alves, Sr., Cardinal Spellman: Alves...
PEMBROKE, MA・8 DAYS AGO
Sports Illustrated

Discover player props odds, plays, and insights for Adam Thielen in his Week 10 contest with the Minnesota Vikings against the Los Angeles Chargers.
NFL・12 DAYS AGO

PORTLAND, Ore. – The Portland Timbers will open the 2022 MLS regular reason against the New England Revolution at Providence Park on Saturday, Feb. 26, at 4:30 p.m. (Pacific), it was announced today as the league unveiled details for each club’s home-opening match for the 29th season of Major League Soccer.
MLS・4 DAYS AGO
lafc.com

Major League Soccer today announced LAFC forward Cristian “Chicho” Arango as the 2021 MLS Newcomer of the Year, becoming the first LAFC player to earn the award. The award recognizes the year’s most impactful new MLS Player, whose first season in the league came duing 2021. Arango shone the brightest among a class of nearly 250 star-studded newcomers that averaged 22.8 years of age and hailed from 53 countries.
MLS・4 DAYS AGO
NHL

Brooks has appeared in a total of 22 NHL games with the Toronto Maple Leafs and Montreal Canadiens. He has posted nine points (4 G, 5 A) and also appeared in two playoff games for Toronto during the 2021 Stanley Cup Playoffs. This season, he has appeared in four games for the Canadiens and has posted one assist. The Winnipeg, Manitoba native, was selected by the Maple Leafs in the fourth round (92nd overall) of the 2016 NHL Entry Draft after spending five seasons with the Regina Pats in the Western Hockey League.
NHL・9 DAYS AGO
NBC Sports

The best regular season in Major League Soccer history has resulted in some individual hardware for one of the New England Revolution's most important players. Matt Turner was voted the league's Goalkeeper of the Year for 2021, the first player in club history to be recognized as such, on the strength of a 1.25 goals against average, .742 save percentage and five clean sheets over 28 starts for the Supporters' Shield winners.
MLS・4 DAYS AGO

PLAYERS OF THE WEEK

PLAYERS OF THE WEEK Valley junior Parker Hartman (#23) and senior Jaxon Edwards (5) were honored by Texas 1A Fan with stickers at the bi-district playoff game last week versus Nazareth. Here’s what the six-man fan site said about each: “Hartman played all sides of the ball and did it at full speed. Defensively, he had two interceptions and a handful of tackles. Edwards ran tough the whole night…
NAZARETH, TX・10 DAYS AGO
WCVB

FOXBOROUGH, Mass. — New England Revolution goalkeeper Matt Turner is adding another honor to what has been a remarkable 2021 season. Turner was named the 2021 Allstate MLS Goalkeeper of the Year on Monday, becoming the first Revolution goalie to win the award. The 27-year-old set a new New England...
MLS・4 DAYS AGO
Log Cabin Democrat

Hendrix forward Seth Stanley has been named the Southern Athletic Association (SAA) Player of the Week, the league office announced Monday. Stanley wins the award for the first time this season and sixth time in his career. In two games Nov. 19-20 in the Great Lakes Invitational, hosted by Marietta...
BASKETBALL・2 DAYS AGO
NESN

The New England Patriots are well represented in the NFL’s latest Pro Bowl voting totals. Patriots cornerback J.C. Jackson, center David Andrews and long snapper Joe Cardona were the AFC’s leading vote-getters at their respective positions as of Wednesday morning. This would be the first Pro Bowl selection for all...
NFL・2 DAYS AGO
CBS Boston

BOSTON (CBS) – It’s not often that pre-game warmups are this exhilarating. “You know, this is a once in a lifetime chance,” said East Boston High School senior Daniel Pedronio. “And it’s going to be my last game so playing here is just crazy.” But for eight Massachusetts high school teams over the next two nights, it’ll be football in the shadow of the famous Green Monster, where goal posts and fresh sod have transformed the baseball diamond into a gridiron for local rivalries — like Eastie against Southie. “It’s amazing,” said football dad Sabino Angelico. “What I would’ve given to play...
BOSTON, MA・3 DAYS AGO