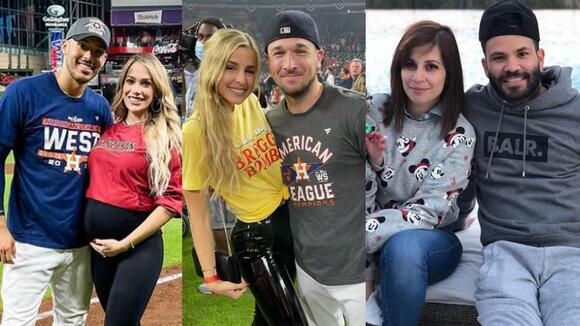 Sure, bringing home a World Series title creates some memorable in-game moments, but who can forget the grand gesture by Carlos Correa after the Astros won in 2017? The video above is from a previous story. The shortstop proposed to then-girlfriend Daniella Rodriguez right after that Game 7 victory over the Los Angeles Dodgers, meaning Correa and Rodriguez both left with rings. Fast forward four years, and not only are the Astros heading back to the World Series, but quite a lot has changed for Correa and Rodriguez, too. They are now married and expecting their first child, a boy. 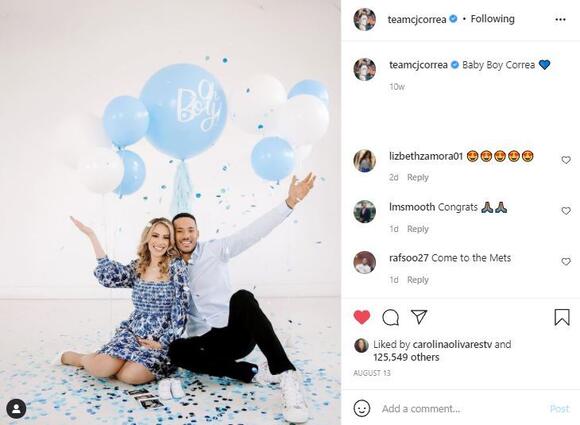 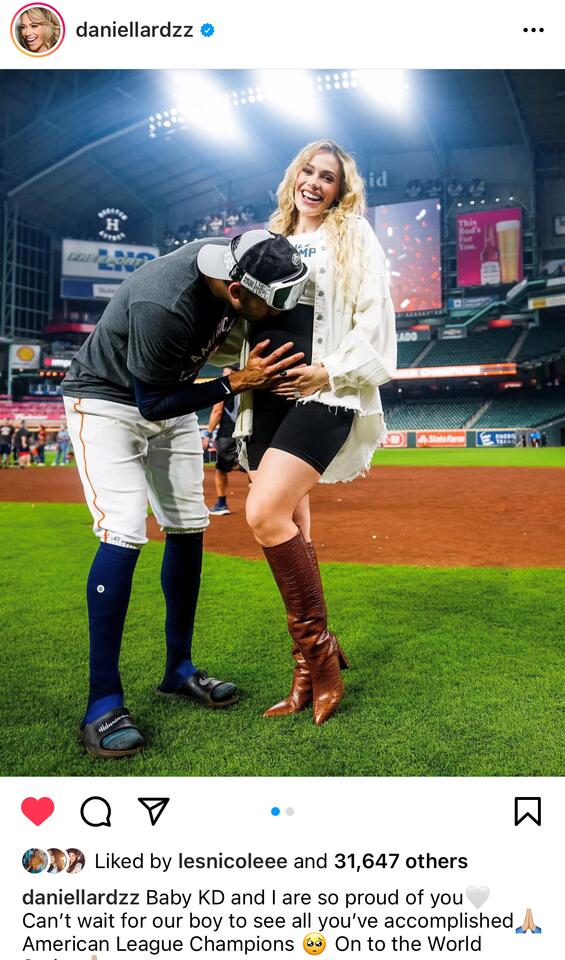 Rodriguez, now Correa, was Miss Texas back in 2016. She has since launched a YouTube channel and her own cruelty, vegan and paraben free make-up line, Sweet D by Daniella Correa . Like Carlos Correa, many of the Astros are family men. Jose Altuve is a girl dad. He and wife Giannina, also known as Nina, are the parents of two girls. In 2019, the couple announced they were expecting their second daughter with a sweet gender reveal involving pink smoke and confetti. Eldest daughter, Melanie, has previously been spotted with her mom checking out the games, and when it comes to her dad, she appears to be his doppelganger ! Third baseman Alex Bregman is getting ready to celebrate his first wedding anniversary. He tied the knot with girlfriend Reagan Howard , now Bregman, in December 2020. In a sweet Instagram post from the winter wedding, the now-Mrs. Bregman said, "Married to my best friend." She runs her own brand, Exiza , described as "ethical athleisure wear" garments made in the USA. According to our partners at CultureMap Houston , Reagan Bregman hails from Louisiana and was later raised in Katy. Before Yordan Alvarez was crowned the American League Championship Series MVP , he became a father of two. He and his wife, Monica, welcomed their second child, a son, in July. Alvarez went on paternity leave , but when he returned to the lineup, he certainly made his presence known, blasting two home runs at the time to help the Astros come back versus the Oakland A's. Alvarez also has a daughter, Mia, who was born in 2018. Known for a hairstyle that earned him the nickname, La Piña, first baseman Yuli Gurriel is also a proud husband and father. In 2018, he shared photos of his newborn son, Jayren, and was also placed on paternity leave at the time. Gurriel also has another son. We haven't seen Justin Verlander since he underwent Tommy John surgery last year, but he's not shy about being a doting father and husband. Verlander and his supermodel wife Kate Upton welcomed their daughter Genevieve in November 2018. Upton has been featured as a Sports Illustrated swimsuit model and has acting experience as well. You may have seen her alongside Cameron Diaz and Leslie Mann in "The Other Woman." She has since created strong4mefit , a 12-week fitness program designed for women, according to the company's Instagram bio page. Pitcher Zack Greinke is married to fashion blogger and former Dallas Cowboys cheerleader Emily Greinke. Together they've been raising two beautiful boys, Bode and Griffin, but their family is growing. She shared on Instagram that they are expecting Baby #3, another boy. The last time the Astros were in the World Series in 2019 pitcher Lance McCullers and wife Kara were awaiting the birth of their first child. They've since welcomed a little girl, Ava, who turned one year old in December 2020. The couple also runs the nonprofit Lance McCullers, Jr. Foundation for animal adoption. CUTENESS: Meet Lance McCullers' adorable dogs

Michael Brantley is affectionately known to some as Uncle Mike and even "Dr. Smooth," but his children have a simpler name for him: Dad. Brantley is married and the proud papa of three kids. After the Astros advanced to the World Series last Friday, it was Brantley's oldest child, daughter Mariah, who stole the show. Brantley held Mariah in his arms as he addressed reporters on the field. And Mariah, ever the star in her own right, rocked sunglasses and when asked what she thought of the season uttered four heart-melting words that would easily elicit a chorus of "awws": "I love my dad." Well, you can't beat that. Sounds like being smooth runs in the family. If you're a single fan of catcher Martin Maldonado, sorry, but he's not going to be the one for you. We're sure you're an amazing person, but it turns out, "Machete" Maldonado is also a happily married family man, as seen in his Twitter profile picture and header photo. He also posted on Instagram that he and wife Janelise recently celebrated 11 years of marriage. Congrats, you lovebirds you!

No respect for Astros they will alway's be known as cheaters no matter what they do. They cheated the game of baseball.

Carlos Correa has made an official decision on his qualifying offer from the Houston Astros. Correa has declined the Astros’ $18.4 million qualifying offer, according to Jon Heyman. His days in Houston are over. The 27-year-old star is now the top free agent in baseball and is bound to receive...
MLB・20 DAYS AGO
dodgerblue.com

The Los Angeles Dodgers had Will Smith, Max Muncy, Justin Turner, Corey Seager, Trea Turner, Mookie Betts, Walker Buehler, Max Scherzer, Julio Urias and Kenley Jansen named among the nominees for the 2021 All-MLB Team. This is the third annual recognition for the top players, with winners being announced on...
MLB・25 DAYS AGO
Sportsnaut

The Houston Astros signed right-handed reliever Hector Neris to a two-year contract on Tuesday. Financial terms were not disclosed by
MLB・5 DAYS AGO
Click2Houston.com

Former Houston Astros manager Bill Virdon, who is the franchise leader in career wins, has died at 90 years old. Virdon was Astros manager from 1975 until 1982. He compiled a 544-522 record over that time. In 1980, Virdon helped lead the Astros to the franchise’s first-ever postseason appearance. That...
MLB・12 DAYS AGO

For a team that came within two games of winning the World Series, and made it to the American League Championship Series for a fifth consecutive postseason, the post-postseason awards circuit has been eerily quiet for the Houston Astros. As opposed to years past, when we've seen MVP awards and Cy Young Awards handed out to certain Astros, aside from Carlos Correa's Gold Glove, there's really been nothing much for the Astros.
MLB・10 DAYS AGO
FanSided

In a free agency class loaded with marquee shortstops, former Houston Astros standout Carlos Correa leads the pack in terms of stardom. Many teams this winter are going to be looking for a starting shortstop, but which one is the best fit for Correa, the former overall number one pick and World Series champion?
MLB・11 DAYS AGO
FanSided

The Houston Astros had a pair of major needs in the back of their bullpen. Once Kendall Graveman signed a three year contract with the White Sox, the Astros needed to find someone that could not only serve in the late innings but potentially step into the closer role should Ryan Pressly falter.
MLB・7 DAYS AGO
brewcrewball.com

The world of baseball looked bleak on Wednesdays while the inevitability of a lockout became impossible to ignore. The was a bit of good news for minor league hitting coordinator Sara Goodrum, who is making a big career advancement. Goodrum will be moving on from the Brewers to become one...
MLB・3 DAYS AGO

What is happening with Justin Verlander and the Houston Astros?

It appeared to be a done deal. Justin Verlander was heading back to the Houston Astros on a two year deal worth $50 million. The contract was reported and everyone was ready to strike Verlander off of their free agent wish lists. It was just a matter of the deal being signed and the Astros making it official.
MLB・2 DAYS AGO
FanSided

The Pitch that Each Houston Astros Hitter Crushes

Let’s take a look at which pitches Astros’ hitters crush the most. Back in the summer I did a series on each Houston Astros‘ pitcher’s best pitch – the one that gets outs and, in short, his best pitch. In this article, I’m going to share the best pitch for each batter throughout the lineup as we know it as of early December.
MLB・2 DAYS AGO
expressnews.com

It's been 57 years since the Houston Astros were the Colt .45s

Although the Houston Astros didn't win the World Series, they still have something to celebrate. The Astros name was born 57 years ago on Dec. 1, 1964 after the team's identity changed from the Houston Colt .45s. The name is the brainchild of the late Harris County Judge Roy Hofheinz,...
MLB・2 DAYS AGO
FanSided

Astros: How Kris Bryant Could Fit into Houston’s Lineup

The Houston Astros have made a couple free agent signings so far this offseason, landing a big fish in Justin Verlander and a significant under the radar addition to their bullpen in Hector Neris. And while the future of Carlos Correa as an Astro remains in question, the team has...
MLB・10 HOURS AGO

The New York Yankees seemingly have been tied to each free agent this offseason, but reportedly got one of their guys Monday. The Yankees signed former Boston Red Sox shortstop José Peraza to a minor league deal, according to Dan Martin of the New York Post. Peraza has bounced around...
MLB・5 DAYS AGO
Empire Sports Media

The New York Yankee family was saddened to learn of the passing of ex-Yankee manager Bill Virdon. Virdon was manager of the Yankees during 1974 and 1975 before being replaced in 1975 my the new manager Billy Martin. In 1974 he won 89 games for the Yankees. However, Virdon’s claim...
MLB・10 DAYS AGO
Larry Brown Sports

After coming up short in this year’s playoffs, the Los Angeles Dodgers could be going back to their fundamentals: acquiring another big name. Bob Nightengale of USA Today Sports reported this week that the Dodgers are interested in former Cy Young candidate Sonny Gray, having engaged in trade talks with the Cincinnati Reds. Fellow Reds starter Luis Castillo was also included in those discussions, Nightengale adds.
MLB・21 DAYS AGO
Inside The Dodgers

Hall of Fame manager Joe Torre only spent three years at the helm with the Dodgers. In his first season, he was able to manage the team to their first NL Championship Series in 20 years. But apparently, a young lefty named Clayton Kershaw wasn't his biggest fan. Torre said in an interview this week ...
MLB・17 DAYS AGO

Free agent Freddie Freeman’s latest Instagram post sure sounded like goodbye to Atlanta Braves fans, even if it wasn’t. If this isn’t goodbye, then Freeman owes fans an explanation because…what the hell?. The greater likelihood is that Freeman is trying to thank Braves fans for a wonderful season, in which...
MLB・28 DAYS AGO
FanSided

Something’s going on with Jean Segura. The Philadelphia Phillies infielder’s Instagram has been scrubbed of any mention of his team, and only one family photo remains. He even removed his profile picture and bio. It’s unclear whether or not Segura ever followed the Phillies’ official account, but he doesn’t now,...
MLB・18 DAYS AGO
NJ.com

The Associated Press reports the Detroit Tigers added infielder Kody Clemens, the youngest son of seven-time Cy Young winner Roger Clemens, to their 40-man roster. The 25-year-old Clemens, an infielder, hit .247 with 18 homers and 59 RBIs in 97 games for the Mud Hens last season, his first year at Triple-A.
MLB・13 DAYS AGO
Yardbarker

Red Sox right fielder Hunter Renfroe was unable to win his first career Gold Glove Award on Sunday night. Renfroe was named one of three finalists for the award among all American League right fielders late last month alongside Houston’s Kyle Tucker, but the honors on Sunday instead fell to Yankees outfielder Joey Gallo.
MLB・27 DAYS AGO