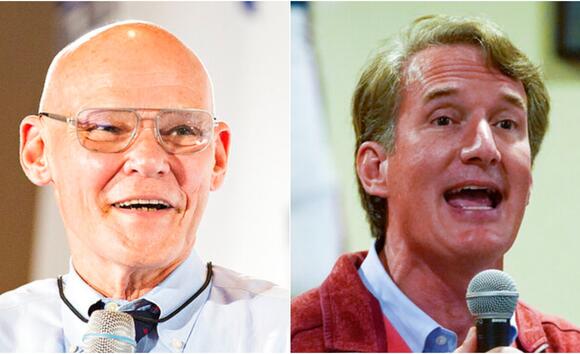 It's the latest frantic, even desperate-sounding email pitch sent out by McAuliffe, governor from 2014 to 2018, who is seeking a second, nonconsecutive term. Political professionals typically avoid overt professions of hatred of a political rival in campaign literature, making the email a stark sign of growing Democratic concern about the race.

New Orleans native Carville, known as “the Ragin' Cajun,” has actively campaigned for McAuliffe in Virginia's gubernatorial election as the race draws closer both on the calendar and in the polls.

In the Monday fundraising email, Carville wrote, “Folks, I gotta tell you the truth: I hate guys like Glenn Youngkin.”

“First, he amassed tons of wealth by stepping on the little guy at a ruthless private equity firm,” the email continued. “Then he used that wealth to buy the Republican nomination in this race for governor. Now, he’s indulging Donald Trump’s dangerous lies about the 2020 election to win over support from right-wing extremists.”

“Day after day, we see this guy bring out the worst of the Republican Party — we can’t let him win this race,” the email added before asking for donations because “we can’t afford to waste another moment.”

In an interview last week on MSNBC, Carville called the race “a toss-up.”

“There is no doubt about it, I am scared to death,” Carville said, adding that he has “sent out 47 emails” for McAuliffe.

A Monmouth University poll last week found Youngkin and McAuliffe tied for support in the race.

As Democrats grow increasingly concerned about the race, a number of the party’s most prominent figures have traveled to the commonwealth to campaign for McAuliffe. In remarks at a campaign event over the weekend, former President Barack Obama decried the “politics of meanness and division and conflict, of tribalism and cynicism” in America.

Sure he does because democrats are not concerned about kids or parents, they only use them to indoctrinate them into their cult.

But he loves that thing with a dik that thinks it's a woman who's now an Admiral... How's that for sick thinking?? FJB

It’s hard getting use to the new reality of the Left. Inflation and higher costs are good, unemployment is even better, men are women, empty store shelves are the new norm, illegal immigration is fantastic and the Afghanistan withdraw was a success.

Herschel Walker is relying on Republican insiders to navigate his Georgia Senate campaign, with his designated super PAC under the command of experienced political hands in Washington and across the country.
NFL・7 HOURS AGO
Fox News

Finance reports: Glenn Youngkin put $20 million of his own money into campaign

FALLS CHURCH, Va. (AP) — Campaign finance reports show Republican Glenn Youngkin’s trend-reversing victory in Virginia’s gubernatorial race cost him $20 million out of his own pocket. The reports filed Thursday with the State Board of Elections show that Youngkin, a wealthy businessman, made no last-minute loans to his campaign...
ELECTIONS・58 MINUTES AGO
Washington Post

Laurel Wise has always considered herself a political independent, though she usually backed Democratic candidates. But this year, with Glenn Youngkin on the ballot, she was ready to try something new. “It was an end-of-the-campaign switch that I made,” Wise said. “I never thought I’d vote for Youngkin, and then...
VIRGINIA STATE・7 DAYS AGO
Washington Times

The team behind Glenn Youngkin's victory in Virginia

A year after Joe Biden carried Virginia by 10 points, Republican Glenn Youngkin won this month's governor’s race by two points. Three of the authors — Jeff Roe, Kristin Davison and Chris Wilson — join James for a conversation about what both parties can learn from the results. Listen to...
VIRGINIA STATE・9 DAYS AGO
cityxtramagazine.com

A severe case of buyer’s remorse appears to have set in among some conservatives over electing Glenn Youngkin as the next Republican governor of Virginia. Over the past week, outrage has bubbled over among right-wingers and TrumpWorld allies alike, who are under the impression Youngkin has insufficient MAGA loyalty, citing his hiring of an LGBTQ staffer and his refusal to block COVID-related local mandates.
POLITICS・13 DAYS AGO
Boston Herald

Former GOP governor hopeful Geoff Diehl announced an initiative this week that may have given some deja vu: “Parents for Diehl,” a move seemingly straight out of Virginia Governor-elect Glenn Youngkin’s playbook. “The Youngkin election highlighted the fact that parents were pretty engaged in a big, big way,” Diehl, a...
MARSHFIELD, MA・13 DAYS AGO
Fox News

This is a rush transcript from "The Five," December 1, 2021. This copy may not be in its final form and may be updated. DANA PERINO, FOX NEWS HOST (on camera): Hello, everyone. I'm Dana Perino, along with Judge Jeanine Pirro, Jessica Tarlov, Jesse Watters, and Greg Gutfeld. It's five...
PUBLIC HEALTH・8 HOURS AGO

What Donald Trump has said about running in 2024

None of the US’s recent one-term presidents have run for another term after being defeated. Gerald Ford considered a run against his vanquisher Jimmy Carter in 1980 but ultimately stayed away, and neither Mr Carter nor George HW Bush were ever expected to make a serious play for another term. Donald Trump, though, sees things differently.The Florida resident is clearly considering a run for president in 2024, and there have frequently been reports that an announcement may be imminent. These have so far come to nothing, but Mr Trump’s hold on the Republican Party means that until he decides...
PRESIDENTIAL ELECTION・1 DAY AGO
Newsweek

In this daily series, Newsweek explores the steps that led to the January 6 Capitol Riot. On December 1, the dam finally broke. Attorney General William Barr invited Associated Press reporter Mike Balsamo to lunch, telling him on the record that he was breaking with President Donald Trump. "Disputing President...
PRESIDENTIAL ELECTION・2 DAYS AGO
Fox News

President Biden and Vice President Harris' "ineffective" leadership in the White House has made them "completely unusable" for Democrats on the campaign trail, former Trump chief of staff Reince Priebus argued on "America's Newsroom" Thursday following sinking approval ratings and the departure of Harris' chief spokesperson. Reince Priebus: It's one...
PRESIDENTIAL ELECTION・1 DAY AGO
WashingtonExaminer

A growing chorus of conservatives is demanding that Senate Republicans shut down the government if President Joe Biden refuses to scrap the federal coronavirus vaccine mandate.
CONGRESS & COURTS・3 DAYS AGO

"We must never forget what the Democrats have done, at the highest level of evil," Trump said in a statement.
POTUS・14 DAYS AGO
Newsweek

Abrams, who served as a member of the Georgia House of Representatives between 2007 and 2017, narrowly lost to Brian Kemp in 2018, by about 55,000 votes.
GEORGIA STATE・1 DAY AGO
WashingtonExaminer

A stash of money and checks was discovered behind a bathroom wall by a plumber working at the megachurch of televangelist Joel Osteen in Houston, Texas.
LAKEWOOD, WA・19 HOURS AGO
Rolling Stone

The House Select Committee to Investigate the Jan. 6 Attack on the U.S. Capitol has been busy. In the five months since the probe was launched, the committee has issued dozens of subpoenas to high-profile members of former President Trump’s circle, as well as a smattering of other MAGA-affiliated figures involved in the effort to overturn the results of the 2020 election. The process has been fraught for a number of reasons, but revelations that have emerged from Rolling Stone’s conversations with cooperating sources indicate the committee could be sitting on a mountain of material — material that could clarify what...
CONGRESS & COURTS・8 HOURS AGO