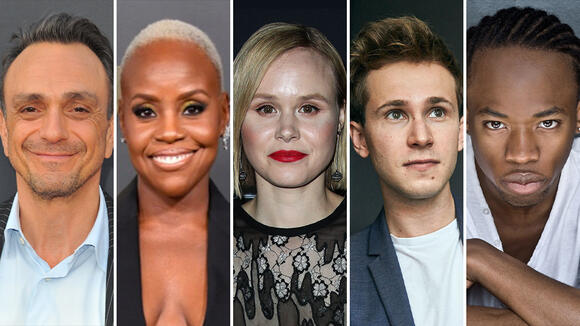 EXCLUSIVE : Hank Azaria ( Brockmire, Ray Donovan ), Haneefah Wood ( Truth Be Told, One Day at a Time ), Alison Pill ( Them, The Newsroom ), Nick Podany ( Harry Potter And The Cursed Child on Broadway) and Dewshane Williams ( The Umbrella Academy, In the Dar k), are set to star alongside Billy Crudup in Apple TV+ original series Hello Tomorrow!, from MRC Television . They round out the ensemble cast of the 10-episode, half-hour dramedy, which Crudup, Emmy winner for his role in Apple TV+’s The Morning Show, also executive produces.

Crudup stars as Jack, a salesman of great talent and ambition, whose unshakeable faith in a brighter tomorrow inspires his coworkers, revitalizes his desperate customers, but threatens to leave him dangerously lost in the very dream that sustains him.

On a November 21 episode of the podcast Talking Sopranos, longtime Sopranos cast member Lorraine Bracco addressed her discontent with how her character, Dr. Jennifer Melfi, exited the iconic HBO series. “I just felt that [creator David Chase] wanted me to get rid of [Tony Soprano]. I would have liked for it to have been more meaningful,” the Oscar-nominated actress told the podcast’s hosts, The Sopranos alums Michael Imperioli and Steve Schirripa. “I mean, I think she cared for Tony. Even though he was a f**k-up and maybe he was never going to really straighten out…I think she really cared for him. You...
CELEBRITIES・3 DAYS AGO
Deadline

EXCLUSIVE: Writer, producer, director Sam Boyd has signed with UTA for worldwide representation in all areas. Known for making projects that honestly portray modern relationships. Boyd is the creator, co-showrunner, and executive producer of the hit HBO Max anthology series Love Life, from Lionsgate Television and Paul Feig’s Feigco Entertainment. Each season of the show follows a different protagonist over the course of many years, with each half-hour episode chronicling a new interpersonal relationship. The show’s second season, starring William Jackson Harper and Jessica Williams, premiered in October. In addition to his co-showrunning duties, Boyd co-wrote and directed the premiere episode and directed...
TV & VIDEOS・10 HOURS AGO
Deadline

EXCLUSIVE: Zuleikha Robinson (The Exorcist), Louis Ozawa (Hunters) and Okieriete Onaodowan (Station 19) have been tapped as series regulars opposite John Krasinski on the upcoming fourth season of Amazon Prime Video’s Tom Clancy’s Jack Ryan. Additionally, Derek Cecil (House of Cards) and Nancy Lenehan (People of the Earth) have been cast in recurring roles in the drama series. Production recently wrapped on Season 3, and a premiere date will be announced at a later date. Season 3 finds Jack Ryan (Krasinski) on the run and in a race against time. Jack is wrongly implicated in a larger conspiracy and suddenly finds...
TV SERIES・6 DAYS AGO
Apple Insider

AppleInsider is supported by its audience and may earn commission as an Amazon Associate and affiliate partner on qualifying purchases. These affiliate partnerships do not influence our editorial content. — Apple TV+ is filling out the cast of retro-future dramedy "Hello Tomorrow!," with Oscar nominee Jacki Weaver reportedly set to star opposite Billy Crudup in the half-hour show.
TV & VIDEOS・11 DAYS AGO

Warning: This post contains spoilers from The Morning Show‘s Season 2 finale.  For a network executive whose entire job revolves around monitoring a daily schedule, it’s kind of wild how bad Cory’s timing is on The Morning Show. Exhibit A: His earnest declaration of love to Bradley as the pair search for her missing brother in an encampment of unhoused people at the dawn of the COVID-19 pandemic. The moment was chaotic; at first, the UBA bigwig was going to admit that he engineered the tabloid report that outed her and Laura as a couple. But when Bradley gently told him there was...
TV SERIES・10 DAYS AGO
Variety

Michael K. Williams had completed much of the second season of his Vice TV docuseries when he died in September. Now, Vice has assigned a premiere date for the return of “Black Market with Michael K. Williams.” The show, featuring some of Williams’ final on-camera work, will premiere its second season on January 10 at 10 p.m. ET. “Black Market” features the actor serving as a bit of a real-world journalist – entering the dangerous world of illicit trade, such as gambling underworld in New York, car thieves in New Jersey and gun runners in the south. In a new...
TV SERIES・10 HOURS AGO
Variety

Netflix debuted a trailer for “Saturday Morning All Star Hits!,” which premieres Dec. 10. The series is a live action and animation hybrid mock starring Kyle Mooney as both Skip and Treybor, twin brothers who serve as hosts of a mock TV special. Over eight episodes, Skip and Treybor celebrate ’80s and ’90s television with a focus on the Saturday morning cartoon experience. The trailer features the fictional news story of the disappearance of actors Lottie Wolfe (Geraldine Viswanathan) and Sean Benjamin (Dylan Sprouse) as well as a mock music video by Johnny Rash (also Mooney) called “Awww Shut Up.” Bento Box...
TV SERIES・11 HOURS AGO
Deadline

EXCLUSIVE: After the original 2012 film helped turn Magic Mike into a global business, Channing Tatum, director Steven Soderbergh and writer Reid Carolin are ready to return to the franchise for another g-round. Warner Bros. is planning the next installment in the franchise, Magic Mike’s Last Dance, with Tatum set to return as Mike Lane, Soderbergh directing and Carolin writing the script to the sequel, which will premiere exclusively on HBO Max. Gregory Jacobs, who directed the 2015 hit Magic Mike XXL, returns to produce along with Carolin, Nick Wechsler and Peter Kiernan. Tatum confirmed the news on his social platforms posting a photo of...
THEATER & DANCE・12 HOURS AGO

Tiffany Haddish and Common (real name Lonnie Rashid Lynn) had a very low-key relationship for nearly two years, but the two have reportedly split. It appears the comedian, 41, and rapper, 49, have reportedly broken up, a source told People on November 29. The source said Tiffany and Common were “too busy” to have a “serious relationship.”
CELEBRITIES・10 HOURS AGO
Popculture

Indian actor Yusuf Hussain has passed away at the age of 73 after contracting COVID-19. The Tribune India reports that Hussain, best known for his roles in Dhoom 2, Raees, and Road to Sangam passed away on Saturday at Lilavati Hospital in Mumbai. His son-in-law, filmmaker Hansal Mehta, who is...
PUBLIC HEALTH・26 DAYS AGO
Hello Magazine

Julia Roberts is on cloud nine over the Thanksgiving weekend, not only enjoying the holiday but also celebrating a special family occasion. The actress shared a throwback picture on her social media of herself with her twins, Hazel and Phinnaeus, from when they were just babies. The two looked as...
FAMILY RELATIONSHIPS・1 DAY AGO
Us Weekly

Memory lane! Danny Moder shared a throwback photo of his and Julia Roberts’ twins, Hazel and Phinnaeus, while celebrating their 17th birthday. “These rabble rousers,” the cinematographer, 52, captioned a Sunday, November 28, Instagram upload. “Seventeen today. Thank you for helping me through fatherhood.”. In the post, the Los Angeles...
CELEBRITIES・15 HOURS AGO

Method acting proved dangerous for Will Smith's marriage while filming the 1993 movie Six Degrees of Separation. In a new excerpt from his upcoming memoir, Will, 53-year-old Smith opens up about falling in love with his co-star, Stockard Channing, while working on the project and still married to his first wife, Sheree Zampino.
CELEBRITIES・26 DAYS AGO
24/7 Wall St.

There are a number of best movies lists. The most famous is probably the American Film Institute’s “100 Years–100 Movies”. Movie website Rotten Tomatoes has a 100 Best So does movie data site IMDb, but it is “250 Best” Some critics like the other side of the coin. Awards for worst movies are given out […]
MOVIES・16 DAYS AGO
Best Life

See Little Ricky, the Last Living Cast Member of "I Love Lucy," All Grown Up

I Love Lucy was one of TV's biggest hits throughout the 1950s. But, given that the show went off the air over 60 years ago, the main cast members of the series have since passed away, including Lucille Ball (Lucy), Desi Arnaz (Ricky), Vivian Vance (Ethel), and William Frawley (Fred). Now, only one cast member who had a regular, credited role on I Love Lucy is still alive: Keith Thibodeaux, who played Little Ricky.
TV & VIDEOS・1 DAY AGO
Outsider.com

There was just something about early 2000’s TV that made a lasting impression. Sure, it could be cheesy, but it was also wholesome and frankly educational, too. Even knee-deep in sewage or elbows-deep inside cattle, Mike Rowe kept us entertained while dropping some blue-collar knowledge with his “Dirty Jobs.” Then, in the realm of home remodeling, we had Ty Pennington. Remember him? He brought us “Extreme Makeover: Home Edition.”
SAVANNAH, GA・1 DAY AGO
TheWrap

“Saturday Night Live” has set Billie Eilish and Paul Rudd as the hosts of its final shows of 2021, NBC announced Thursday. While Eilish will make her hosting debut on the sketch series (she was previously on “SNL” as musical guest), Rudd is joining the Five-Timers Club with this Studio 8H gig.
TV & VIDEOS・11 DAYS AGO
Outsider.com

A bevy of stars made up the cast of Gilligan’s Island. One of the show’s stars, though, forbade directors to do close-up shots. Who was the star who had this deal? It wasn’t Gilligan! No, it actually was Natalie Schafer. You know…Mrs. Howell, married to wealthy Thurston Howell III, played by Jim Backus.
CELEBRITIES・2 DAYS AGO
Best Life

Take a look at the new Netflix movie offerings for these first two weeks of November 2021, and you'll notice some patterns. With the holidays closing in and the end of the year approaching, there are plenty of new holiday movies and Oscar hopefuls to be found on the service. But that's not all that's just landed. In addition to a fairytale-like Santa origin story, a critically acclaimed period drama, and a new Western packed with movie stars, you'll also find some returning old favorites. So read on to see our picks for what movies to catch on Netflix this weekend.
MOVIES・17 DAYS AGO